Damn the silverware, smash the crystal. I can't take the accouterments of middle-class marriage. 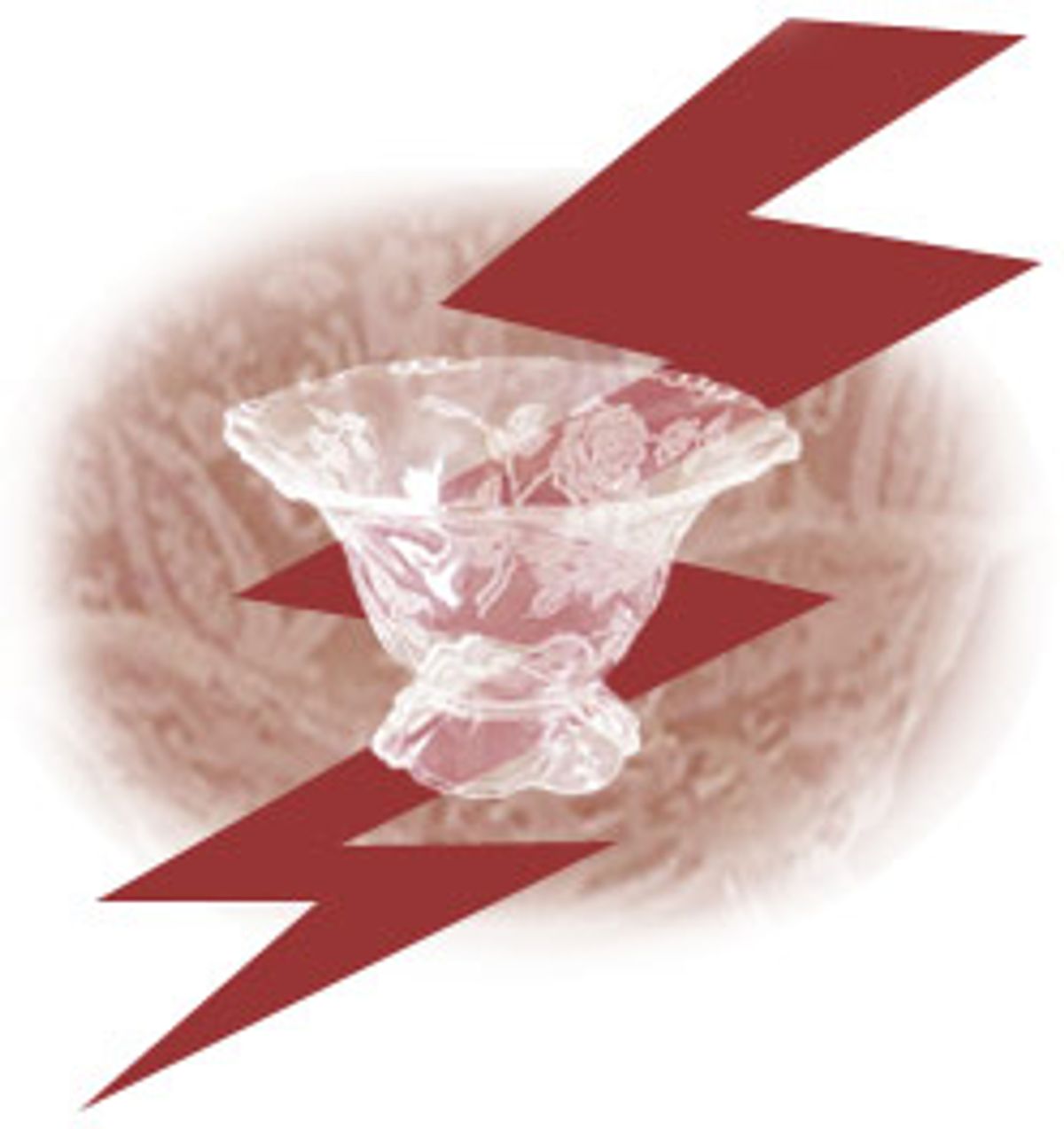 When we lived in Los Angeles, my then boyfriend, Josh, developed the habit of swearing under his breath and pounding the steering wheel theatrically while driving. To him, it was just a funny way to express his frustration at spending so much time in traffic. But I felt frightened. I explained to him that while he thought his road rage was comical, it made me feel as if I were about to get beaten up -- not by him, certainly, but by someone. He didn't understand, but he agreed to knock it off.

Cut to several months later: Josh and I were now engaged. I brought in the 1,325th cardboard box to arrive at our front door. It was filled with Styrofoam peanuts, which cushioned a white cardboard box wrapped in silver and white paper. Inside this box were even more Styrofoam peanuts and an object that was securely cocooned in layers of plastic bubble wrap and tape. I pulled and ripped at it savagely. I bit into the tape to get it open. "Don't you want the scissors?" asked my sweetie, his eyebrows forming a triangle of worry. "No," I said, panting a little. "Almost ... got it ... mrshfsph ..."

I unearthed the artifact and turned to him, red-faced and clutching it to my chest.

It was another crystal bowl.

I let loose an unearthly howl and attempted to crush the would-be heirloom with my bare hands. Being a high-quality item, it didn't give. "Hey, why don't you let me take that?" said Josh. I shook my head no. I hunched over like an earth-smeared Homo habilis and edged toward the door. I was going to take that thing out into the alley and smash it into a million pieces, and then stomp on the pieces until there was nothing left but a fine shimmery dust.

This is the point where Josh and I had to have a little talk about my gift rage. "Remember how you felt when I had road rage?" he asked.

But I was still furious.

Cut to today: Although I got married almost 15 months ago, I still haven't written all of my thank-you notes. There's a box in my office that doesn't even get the courtesy of being placed in my bamboo hutch. It doesn't dwell on top of my filing cabinet among the office supplies. It sits on the orange shag carpet, in the corner, just barely within my sight as I toil at my desk. I feel its judgment, born of tree pulp and ink, daily.

This box contains virgin stationery and envelopes, which should have been transformed into handwritten thank-you notes long ago:

Thank you so very much for the lovely crystal candy dish. I just know it will be so useful and decorative in the years to come. Thanks so much for all your kind thoughts.

I know that I am a horrible person. I'm telling you this right now to save you the trouble of telling me. If that's all you want to know about me, you can stop reading right here.

Let me say, in my own defense, that I never intended to get married at all. Frankly, I've never had a high opinion of the institution. And before I met Josh, I couldn't even begin to imagine that any man would sign on for such a hazardous tour of duty.

My best friend, Ingrid, recently confessed that she had also reckoned that marriage just wasn't going to happen for her old friend Mary K.

"I figured that the chances were pretty limited for me," said Ingrid, a lithe, fiercely intelligent Eastern European blond with almond-shaped green eyes. "But for you, I thought one, at most two, men in the entire world could possibly be up to the job."

Life will surprise you: I met one of them.

Once I realized that I'd met my husband-shaped man, my inclination was to get married in a quiet, small and almost imperceptible way. But then I remembered Professor Parsons.

Back in college, Professor Parsons, who was pale and haunted and smelled of death, decided to interrupt class to give us his theories on marriage. He said that if you were going to get married, you must do it in front of everyone you knew. A wedding was a powerful ritual, he said. It was supposed to be somewhat unpleasant. Marriages sealed in Las Vegas or on tropical islands with nary a parent or neighbor in sight were doomed to failure because the community wasn't there to witness the pact (and hold the threat of shame over your heads if it seemed as if it wasn't going to work out after all). Professor Parsons underscored the seriousness of his proclamation by dying a week after the class finished.

Because I was serious about my marriage, and because I had been to a few self-conscious, postmodern weddings of couples whose marriages later failed, I let the big wedding happen. My mom, bless her, did all the heavy lifting. She took charge of the affair and set the whole thing up with nothing but a phone, some fresh black Flairs and a notebook. All I had to do was register for gifts.

This is where my troubles began. Asking for cash was vetoed by the keeper of the gift givers (Mom). "It's tacky," she said, "and just not done." I floated some other options: "No gifts" or, possibly, "Please give a donation to charity" instead. But clearly, people would give us gifts anyway.

A wedding is supposed to be like the most bitchen prom ever, plus you get a shitload of presents. The presents! People talk about the presents as if they were indeed manna from heaven. This propaganda is all aimed squarely at the female: Congratulations! You've finally managed to hook some unsuspecting shlub; here's your reward, Missy!

Stores offer classes and consultants to make sure you are well educated about what you are signing up for -- as if people (women) are too stupid to know what they want. There's a mystification process going on here: China, crystal and silver become much more than simple consumer goods you can pick up at any department store in the USA. They are proof that you have finally made it to the holy land of true middle-class adulthood.

Well, the M.R.S. degree was never my goal and I didn't covet these totems of middle-class life. I said as much to anyone within earshot. The typical response was, "Oh, but you will." After nearly three decades on this planet, I was pretty sure that my tastes were not going to change. And if one day I woke up and realized that something was indeed missing, I could always go out and buy it for myself.

But finally, Josh and I were forced to work out a compromise.

The scheme went like this: We'd register for a bunch of stuff we had no intention of keeping (china, silver and what not) and some stuff that we would keep (kitchen items, towels). The plan was imperfect at best -- we spent hours lugging unwanted gifts back to stores and waiting while harried clerks performed the required administrative tasks. (Some stores will give you cash; but most will give you only credit. If someone gets you the lowest-priced item at a fancy emporium, there's nothing else you can get, anyway.)

But I felt nervous about the whole register-and-return plan. What if it didn't work? What if I were doomed to keep all that stuff?

The prospect of having closets full of domestic equipment and tchotchkes I would never use caused me sincere emotional distress. I have peered into the closets of other married women. I have seen the multiple sets of china in their padded, zippered vinyl cozies. I know that silver requires flannel bags and little paper strips that keep it shiny. I know that crystal glasses must be washed with a rubber pad placed in the bottom of the sink and dried with a linen towel.

Just thinking about the sheer existence of the gift pile -- clogging up my cabinets, packing and unpacking it every time we moved -- lent a sinister undertow to my sleep for months. I felt as if I would drown in expensive gewgaws and never be able to wake up.

The merchandise came -- and it came in vast quantities. It was like having a bad Christmas on a daily basis. There were things we had asked for, and so many things we had not: Crystal bowls aplenty. Nativity sets. Charger plates. Cream-and-sugar sets. A three-tiered Santa cookie displayer.

Whom were these gifts for? No one who was living at our house.

We tried to give the stuff away. I invited my friends over and watched them head straight for the boxes and start pawing through them, just as I wanted them to. But when I said, "You like that vase? You want it?" they got sheepish. The only thing I managed to pass on was a crystal bowl for my friend Hillary's imperial cat, the Baron von Puffkin, to eat his lordly repast out of.

Finally, I called a local thrift store and had it haul away the things that we couldn't return -- boxes, ribbons and all.

As a side effect of our marriage, both my husband and I have developed an extreme aversion to any kind of retail situation. I've turned into one of those people who orders stuff online -- pet food, books, even clothes. We mutually agreed not to buy anything for each other last Christmas.

I wrote a fair number of thank-you notes, but somehow I lost the motivation in the midst of honeymooning and moving and such. I know that I should finish them; I know that I am wrong. Josh offered to help at some point, but I waved him away. Somehow, I feel that this is my responsibility.

But I resent having to write them. I hate the ass-kissing tone of them. I hate feeling coerced into telling others how great they are. The yoke of obligation chafes unbearably. I am embarrassed to be on the receiving end of such munificence. I obviously don't deserve it.

Keep an eye on your mailbox.

Mary Valle is a writer living in Baltimore. Her work has appeared in Esquire, the Los Angeles Times and Baltimore Magazine.