From household saint to social pariah 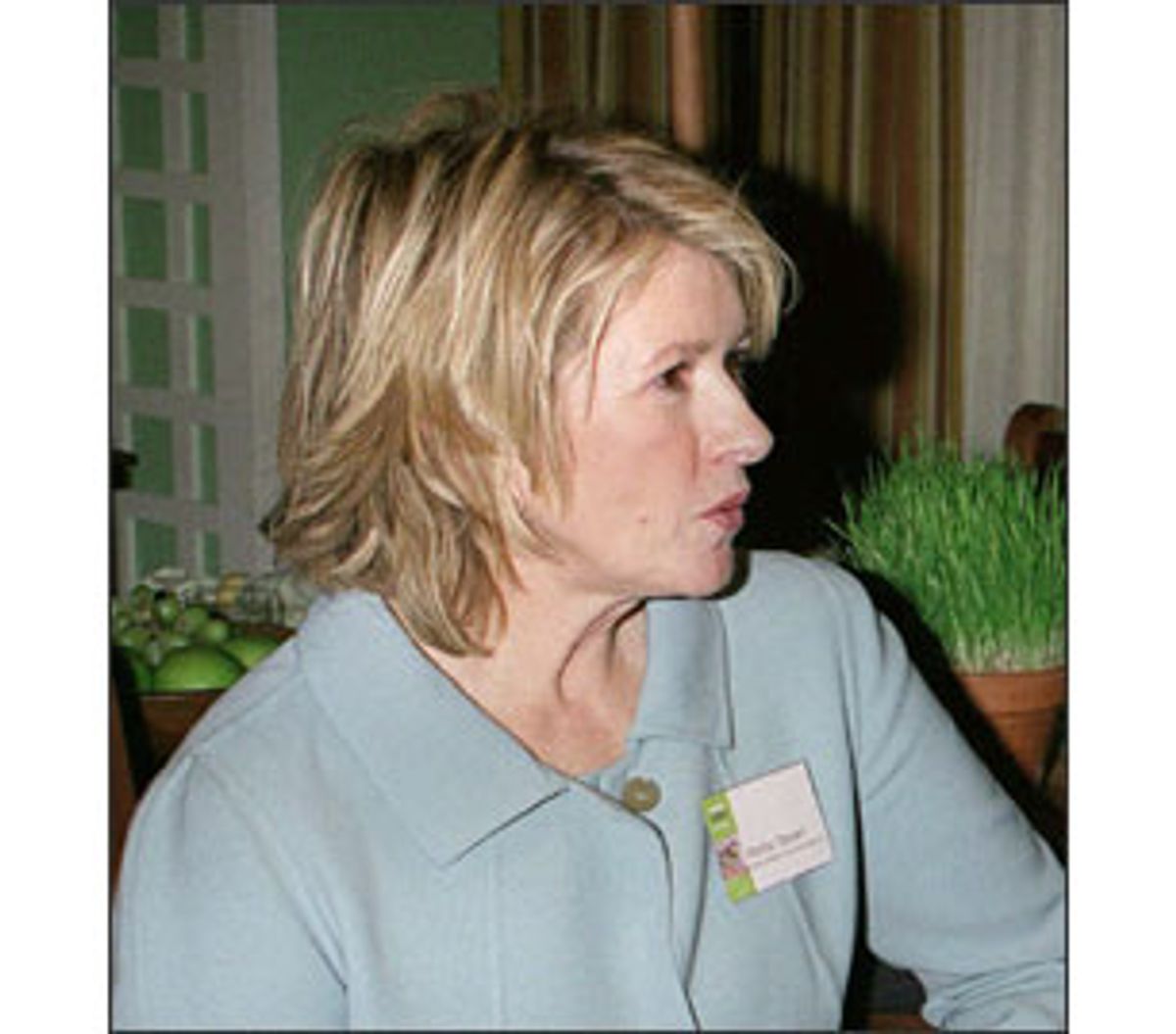 In the Feb. 21-28 issue of the New Yorker, Joan Didion made some incisive observations about the enigmatic allure of Martha Stewart. "The promise she makes her readers and viewers," Didion wrote, "is that know-how in the house will translate to can-do outside of it ... The 'cultural meaning' of Martha Stewart's success, in other words, lies deep in the success itself."

It's hard to argue with Didion's point -- to a point: The Polish girl from Nutley, N.J., who started a part-time catering business in her house, is now the famous scion of a staggeringly successful, publicly owned multimedia corporation bearing her name. She's running an empire on four hours of sleep a night, has numerous tastefully appointed residences and she's got all of those tag-sale treasures that you and I will never have.

But what are we to make of Stewart's unwitting confession of interpersonal failure in last Sunday's New York Times Magazine?

An essay titled "Martha Stewart Leaving" appeared under Stewart's byline in the Times' theme issue on American suburbia. The piece was ostensibly the author's apologia regarding her decision to move away from Westport, Conn., her home base for almost 30 years.

Yet with the astonishing lack of insight that is familiar to regular readers of Martha Stewart Living magazine, Stewart made it apparent, if not exactly clear, that the real reason she's giving up on Westport is because she's lonely there. Her revelations of her neighbors' cold-blooded rejections and her increased obsession with her pets don't jibe with the idea that Stewart's "know-how" in her Turkey Hill estate has translated to "can-do" in the community outside of it.

Casting out from her unintentionally illuminating, purposely nostalgic "Remembering" column, which appears monthly on the back page of Martha Stewart Living, Stewart wrote in the Times about the changing face of suburbia, in particular, Westport. The Times editors capture it thus in their concise, subtly ironic subhead: "The reason Westport no longer works for Stewart: Small-town life just isn't what it used to be."

Stewart then outlines the way Westport was vs. the way it is now, a difference she boils down to two primary assessments: one, that the town is no longer full of hospitable folks, and two, that its local regulations have not proven to be helpful to the entrepreneurial projects of its best-known resident. Stewart details how her favorite local businesses have disappeared, how her "extremely critical" neighbors have created "an increasingly unfriendly neighborhood atmosphere," how her acrimonious divorce divided her social circle and left her lacking in companionship, how her married daughter doesn't want to visit "with the atmosphere in Westport so changed."

It's surprising to hear that "friendliness" actually matters that much to Stewart, for whom people have always seemed such an afterthought. Stewart's meal-centered "reunions" with various friends and acquaintances that are featured in the monthly magazine always seem stiff and staged, as if "An Iowa Picnic" or "A Luncheon in Harlem" are the only ways to capture Stewart in commerce with someone not within her employ.

It's equally surprising that nowhere in her essay does Stewart take note of how significantly she -- not just her town or her marital status or "things" -- has changed since she made Westport her home.

Instead, Stewart tells us how she's managed to cope with "the warning signs" that her community was turning its back on her. She's redecorated her house and "carefully edited" her furnishings. She's enlarged her gardens. She's tried to offer fresh eggs and garden produce to her endless stream of new neighbors, only to be rebuffed ("once with a slammed door"). She's ultimately given in to creature comforts -- in addition to her chow chow dogs and her eight cats, she's now breeding chinchillas.

Yet despite how much she loves her pets and the oft-cited Turkey Hill estate, despite her "bold attempts" to keep up her own social traditions, nobody's inviting her to dinner and she feels isolated. The vision this information evokes in the mind's eye is rather creepy: Stewart is just another lonely loser in suburbia, a shut-in surrounded by landscaping and material comforts and litter boxes, someone who is draped with shedding, long-haired animals and reduced to watching "The Sopranos" by herself every Sunday night.

This is, quite frankly, more than I wanted to know about our Martha. Don't get me wrong. There's a certain mean-spirited pleasure I get out of scanning the "Remembering" column for dirt every month. Unlike the front-of-the-book "Letter from Martha," which is constrained by editorial necessity to hollow-souled flag-waving for the month's features and an occasional mortified mea culpa for some transgression in the previous issue (no flour in the recipe for Easter Egg Cake!), Stewart's regular "Remembering" essay is clearly the Good Thing queen's sacred opportunity to flex her literary muscles on a wistful subject of her choosing.

She's written about undertaking a third major garden, making marshmallows and sending her young daughter to camp. The current issue's "Remembering" glorifies the good old days when Stewart's mother used to spend every Monday slaving over the laundry for a family of eight in the steamy basement of their house in Nutley.

Utterly devoid of even a whiff of irony, these missives are frequently peppered with weird and unintended revelations about the inner Stewart, whose earnest reminiscences and forthright, if prosaic, storytelling are the scrim through which we are witness to her thorough lack of self-awareness.

There are so many classic examples of Stewart's obliviousness regarding her own psychology that it's hard to narrow down the field of favorites. In her latest "theme" issue, the just-released "Martha Stewart Baby," which outlines the many ways a baby can be utilized as a decor statement, Stewart remembers that her labor with Alexis lasted -- yes! -- exactly one efficient hour!

Another all-time great was Stewart's 1998 column on Alexis' summer camps. Before spending the summer correcting the spelling in 6-year-old Alexis' homesick letters, Stewart basked in the maternal glory of choosing a camp based on the aesthetics of the grounds (a long dirt road paved with crushed garnet fragments, "a lodge that resembled a Shaker meeting hall").

And then there are the references to "When Andy and I were first married ..." Any Stewart follower knows that her marriage ended in a bitter divorce a decade ago, and her ex -- who went so far as to take out a restraining order against her -- is now married to Stewart's youthful former assistant. It's nothing less than bizarre, then, to note the frequency with which Stewart's rosy-toned essays linger on some fondly remembered aspect of married life with Andy.

Frankly, it's fun to have such a regular dose of imprudent psychological obtuseness from the woman who has been impressively shrewd in building a lucrative empire wrung solely from her personal "vision." Precisely because of that empire, I've often wondered why someone doesn't pull the plug on "Remembering" before she really embarrasses herself. I've also wondered if "Remembering" is a title that her wincing editorial staff uses as shorthand for "Remember, it's her magazine."

The thing to remember about "Remembering," though, is that within the context of "Martha Stewart Living," Stewart's indiscretions are fairly safe. She's in Switzerland, so to speak. Which is not to say that those of us who buy her magazine or watch her show or covet the rubberized linen shower curtain in the "Martha By Mail" catalog actually like Stewart, that we're on her side. The relationship between Martha and the Martha'd is far more complex than that, as we all know.

"Even her troubles and strivings are part of the message," notes Didion, "not detrimental but integral to the brand." Ours is a codependency; we may sneer in derision at Stewart's infuriatingly elaborate and expensive projects one minute, then stare covetously at her animals fashioned out of homemade mohair pompoms the next.

By virtue of our complicity in being even the slightest bit interested in Martha Stewart, we become members of Stewart's unique 12-step world. When we read "Remembering," it's the equivalent of sitting in a squalid parish basement drinking watery coffee and listening to the boring, woebegone life story of some balding guy with a compulsive thigh-jiggle and an ugly sweat suit. You don't laugh; you don't point. Once you've walked in the door and sat down, you've joined the community. You may roll your eyes privately, but you don't rat Stewart out.

The editors at the Times magazine, however, let Stewart rat herself out. What would pass for a hiccup of personality in Martha Stewart Living suddenly looms pathetic and cringe-inducing within the far more symbolically "public" pages of the New York Times.

It's no crime and no shame to admit you're lonely and that nobody in your town wants to be friends with you -- but it's pitiful to admit it to a circulation of 1.7 million readers without realizing what you've done.

Over the years, Stewart has elicited a whole kaleidoscope of emotions from me: fascination, envy, material desire, determination, frustration, boredom. Until now, I never felt sorry for her. And what I really don't want is to turn my Martha fantasies toward social intervention for the CEO of Martha Stewart Living Omnimedia -- imagining some sort of dinner round robin ("Sally, you call her up for Monday; I'll invite her over for Wednesday; maybe we can get Stan to take her out for pizza on Friday"), or convincing her to give up the chinchillas.

I want my Martha fantasies for me. Lord knows I'll need the time if I'm ever to get any of my Martha projects off the ground. I want her to replace the veil she's dropped, to keep her revelations behind the merciful curtain of Martha Stewart Living, where such intimacies belong, and where they can be marveled at or shrugged off, as desired. I'm in agreement here with Didion: "The dreams and fears into which Martha Stewart taps are not of 'feminine' domesticity but of female power, of the woman who sits down at the table with the men and, still in her apron, walks away with the chips."

Stewart has indeed proven herself to be, in her inimitable way, a model of contemporary female power (if a model with feet of clay), and for that reason I have to bemusedly offer my admiration and, in a way, my loyalty. I do hope she moves out of Westport and makes more friends, and I hope she can stop herself at eight cats, which should help. I also hope she learns to play her cards, when she next goes to the "outside," a little closer to her chest.

Kate Moses is the author of "Wintering: A Novel of Sylvia Plath" (St. Martin's.) She was the co-founder, with Camille Peri, of Salon's "Mothers Who Think" site, and she and Peri also co-edited the award-winning book "Mothers Who Think: Tales of Real-Life Parenting." She lives in San Francisco.