"The Many Aspects of Mobile Home Living" by Martin Clark

A wild and weirdly plotted novel by and about a circuit court judge, complete with a hunt for lost loot, a murder and a convoluted trial. 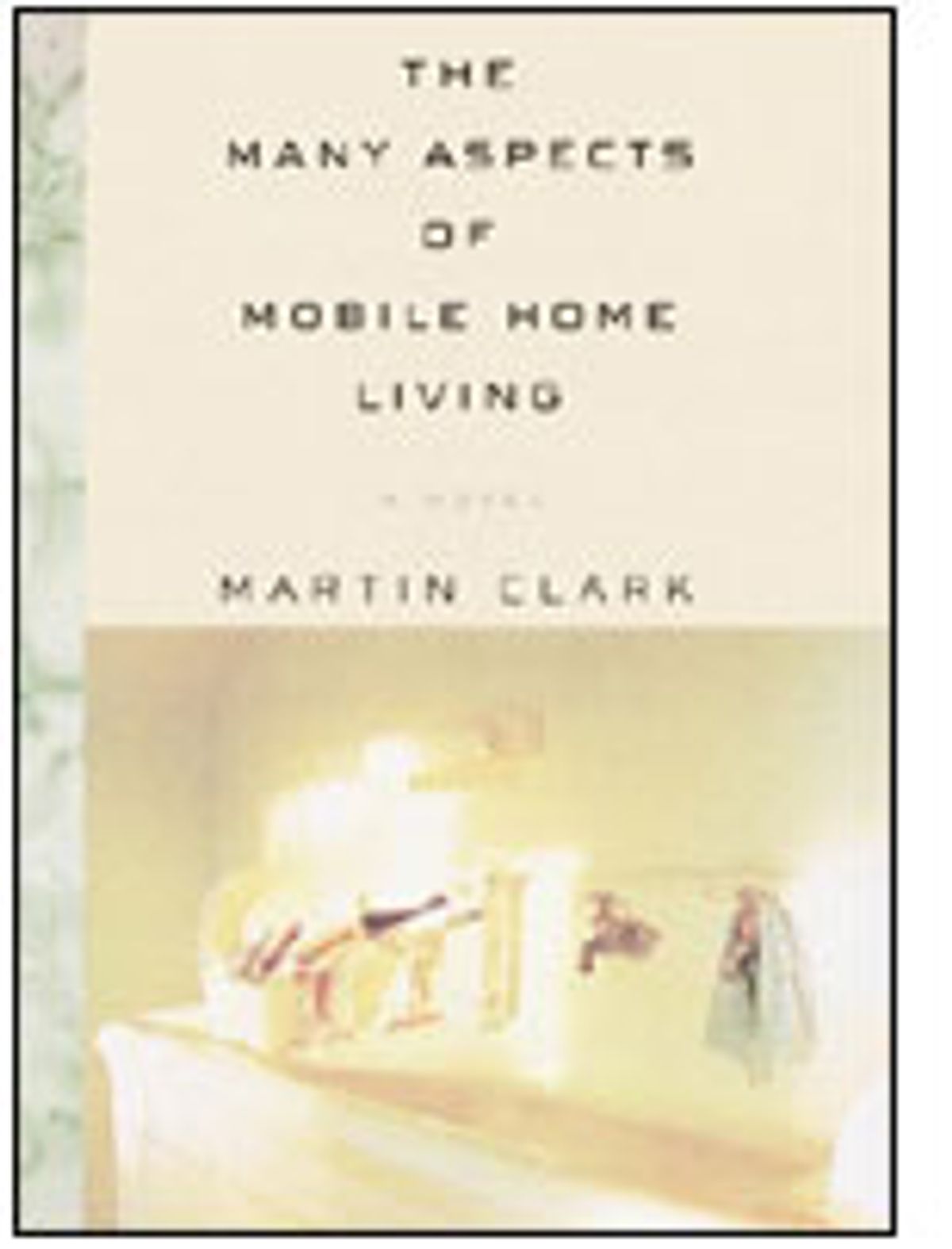 This first novel about a circuit court judge in North Carolina starts with a rollicking description of a gas station attendant who refuses to believe in the Apollo moon landing, gorillas, weather radar or whales. "I don't have no time for foolishness," he tells a motorist, before vanishing from the novel after Paragraph 2. The rest of the book deals with Evers Wheeling, the judge, an alcoholic slacker who suffers the same kind of blank cynicism as the service station guy, until a series of odd events leaves him with a quasi-religious faith.

Evers didn't believe in very much at the time, and he was socked in under a long horizon of bloodless indifference as thick as paste; he had the look and air of a cur mother suckling another gang of mongrel babies, her head and side lying flush on the ground, her fur clumped in a few spots, too weary to do much more than shift her eyes and half-ass growl if someone happened by.

After that passage -- in Paragraph 3 -- the adventurous writing dissolves, and what starts as a promising debut turns into an uneven murder mystery.

But not a bad one. The best aspect of "Mobile Home Living" is its loping sense of humor. Too much of the book, though, relies on rusty plot devices. A woman named Ruth Esther English corners Evers one morning and offers him part of a lost inheritance in exchange for letting her brother, Artis, who's up on a possession charge, go free. Artis holds the missing clue to a puzzle that might reveal the money's location. Evers doesn't need the cash and neither does Ruth Esther, so Clark spends a lot of energy explaining why Evers agrees to corrupt himself and fly with two other people on a moonshine quest for a safe-deposit box in Utah. The most interesting reason has to do with the eerily pure "albino mystery" of Ruth Esther's tears, which Evers collects and keeps in the cap of a ketchup bottle. The tears haunt him even after his quest to Utah -- which is brief -- and maintain some kind of mystical significance through the rest of the novel.

Evers' love-hate relationship with his estranged wife, Jo Miller, reveals a number of his weird, deep neuroses about women, and when she starts to win their divorce trial (after being caught in flagrante with her lover in a motel room), somebody kills her with a pistol. The subsequent investigation smears both Evers and his brother, Pascal, who lives in a mobile-home park, but a self-sacrificing act by Pascal leaves Evers with a quavering faith in Something every bit as absurd as the pure white tears in the taped-up ketchup cap.

A lot of the characters feel thin, but the trial scenes are engaging. Clark himself is a judge in Virginia, and he has the talent to show just how "yes" becomes "no" in the convolutions of a circuit court system. Such sickening legal peristalsis could drive a novel all by itself; Clark doesn't need any treasure quest. He captures the hustling and incompetent lawyers, lying and manufactured witnesses and strong and weak personalities that steer a trial more decisively than due process. Evers the judge hides women's magazines (Cosmopolitan, Self) in big lawbooks to read when a trial drags on; Evers the client can't behave himself in the courtroom. Evers, in fact, can be unfathomably strange, yet his craziness makes him the clearest character in the book. When Jo Miller brazenly lies during an alimony hearing, for instance, he lapses into a hallucinatory fugue:

Her face -- very suddenly -- changed, came on like an electric fan on a hot day ... Out of the middle of the maelstrom, Evers saw two sharp eyes appear ... The spiked eyes looked right at him, and Evers hunched forward and stared back, leaned across the table on his elbows and clenched his fists. The circling mess balanced on his wife's head didn't leave until White [his lawyer] kicked Evers under the table and pinched his biceps. "Stop staring at her, Evers. You look menacing or crazed or something."

Evers also likes his beer mixed with tomato juice and doesn't think that's strange. ("Do you want tomato juice in your beer or just beer?" he asks Ruth Esther in a liquor store.) He's flawed but intensely likable. The trouble with "Mobile Home Living" is that no one else has been painted with so much paradoxical detail. Jo Miller is a one-dimensional bitch; Pauletta, a black lawyer, could be any black lawyer on TV. Clark wastes his time with rickety pulp-fiction conventions to make what's ultimately a good and serious point about religion and irrationality. It would be nice to say he's "filling up the genre" of legal fiction, letting his artificial story twists serve his theme, but no: The incessant plotting feels more like a failure of faith.