Travel by the book

Guidebooks ridiculously chart out a trip's every moment. And on some dark evenings, that's not so bad. 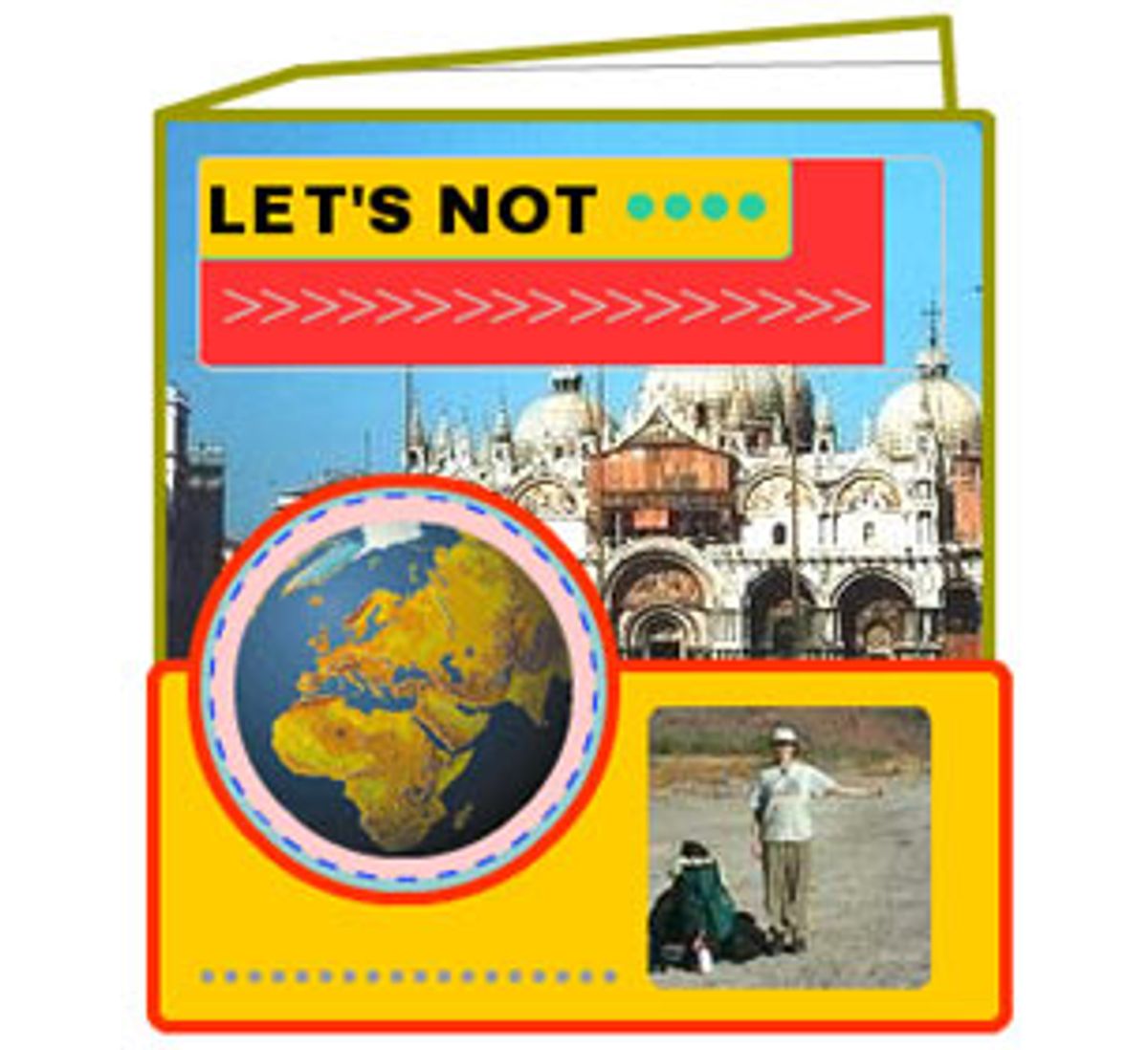 Some years ago, when my husband J. and I were traveling in Europe, both barely 30, fairly ignorant and fairly brave, I hated the guidebooks that held us in thrall. They made a few days touring a foreign city read like weeks in the desert fleeing bandits. Was it really necessary to carry handy wash 'n wipes, premedicated this 'n thats, multi-use geegaws, mild detergent and clothes pins? All in secret pockets? Was it absolutely necessary to wear shirts that breathed? Must one stay hydrated, always? Sleep on schedule, like hostages or babies?

It was not clear to me that these books enhanced travel. Didn't they, in fact, usurp it? I hated to see my experience -- that wayside shrine I'd discovered, those sun-washed steps -- appear in quotation marks. I hated to have reality rated. And no matter how much boldface print they used, guidebooks actually encouraged inattention, it seemed to me, with their neat categorizations of the world, their obsessions with mundane safety and comfort, their normalizing of the strange. Under "Dangers and Annoyances," I thought, they should list complacency.

My antipathy lessened, though, one night in Italy, in the seaport city of Taranto. J. and I had overshot our day's destination, the small resort of Metaponto. Only some trains stopped at Metaponto, a useful fact the guidebook -- which tended to dwell at length on the intricacies and logistics of bathrooms -- failed to mention. Our train was not one of these. So we arrived instead at Taranto, described as industrial, poor and crime-ridden, very late at night.

The depot was deserted except for two backpacking American college boys who would barely speak to us. They huddled over their guidebook, we huddled over ours. Battered taxis softly panted in a crooked queue, their various signs looking improvised. There were no meters. The guidebook said don't get in unless there is a meter. But the drivers did not seem interested in going anywhere, anyway. They smoked and looked silently on as we set out walking.

J. had found a hotel in the book, "a few blocks from the train station." I tried to look purposeful. We both tried not to seem to lug our luggage, our increasingly heavy, expandable shoulder bags. I had decided that shoulder bags were less touristy than backpacks, or anything on wheels. And the Air Canada tags were to ward off terrorists, since it was l986 and the United States recently had bombed Libya. They had worked, so far.

Nasty encounters of a more personal nature comprised our fears as we walked away from the station and down an increasingly dark street. J. stopped abruptly when no hotel materialized, saying we should go back, that it was silly to be out meandering at 1 a.m. But just as we turned around, an unmarked car crept alongside us, the driver posing one-word questions in English. Hotel? Taxi? Hotel?

We got in, with some trepidation, and J. jumped into a volley of questions and answers in Italian that seemed barely connected. He was in charge of this part of the trip (my responsibility had been France), and, while he had good command of basic guidebook grammar and vocabulary, his delivery, I could see, was often all wrong.

"Domani," he might mutter to a desk clerk. No response.

"Domani!" I would echo, as if overjoyed or surprised or angry or desperate. Sometimes I'd elevate my hand, palm inward, fingers flat, as if I were a martyred saint indicating heaven. Guidebooks were fine for lists, but they forgot drama.

In the wee, dark hours in the back seat of that car, I had no energy or inclination for theater; J. had to fumble for the words alone. I realized, though, that he was trying to get the driver to take us all the way back to Metaponto.

"Non!" I interjected, picturing our bodies dumped out under the olive trees. So we ended up going, after all, to the driver's friend's "very good hotel," an option J. had resisted.

It was a warehouse down on the waterfront. Absolutely dark within, no identifying signs, no streetlights illuminating it from without. We got out of the car and looked at each other, our eyes wide. J. paid the driver a seemingly arbitrary sum. (No meter.) The car crawled away.

All was silent. I thought I detected a feral movement in the periphery of my vision -- a cat, maybe a rat. I clutched the back of J.'s shirt with my free hand as we approached the grimy glass door and rang the bell. After several long moments a voice came from somewhere deep within, calling out unintelligibly. We waited. The voice called again, sounding angry. J. and I were having a hissing exchange. I wanted to start walking. I wanted to go to Metaponto. Now he didn't. We were here.

We heard a muttering approach and, after much rattling of the locks, the door swung open to reveal a portly, grizzled man wearing nothing but saggy underwear. He peered at us and waited.

"Is this a hotel, do you have any rooms?" J. asked, forgetting any Italian he might once have known. I said nothing. I whimpered, sotto voce.

The man's face flicked on. "Hotel?" he demanded. "How many?"

"Due," J. said, regaining his bilingual abilities, but holding up two fingers for good measure.

"Due!" the man repeated, as if he were a language instructor drilling his class. "Due!"

"Due!" I proclaimed, then jumped at the sound of a loud crash coming from some nearby garbage cans.

Sighing and rubbing his face, the man pulled the chain of an overhead light, which stuttered into keening fluorescence. He assumed his place behind what apparently was a registration desk. It was surrounded by metal bars, evoking the Wild West, or a pawn shop. Pushing a form toward us, he quoted, defiantly, an extremely low price.

J. looked cheered and reached for his special hideaway travel wallet. But I was whimpering again, and muttering supplications into J.'s ear and to the night in general. Our usual travel roles (J. cautious, me daring) were temporarily reversed. I really, really wanted to leave. I could picture that front desk on the evening news, accompanied by our passport photos, up there in the corner, J. and I grinning stupidly, permanently beyond any understanding of the newscaster's recitation -- operatic or otherwise -- of all the grisly details.

We followed the man up a flight of dark, splotched stairs, stopping at a half-open door from which came the desolate sound of dribbling water. I was thinking of my miniature, plastic travel corkscrew, tucked inside the hidden flap pocket of my day-to-evening, wrinkle-free travel skirt. I figured that if I could get it quickly out of its convenient plastic sheath, I could do some damage to an eye.

But J. was smiling foolishly and nodding his head happily as the man showed us first the rust-stained sink and toilet of a bathroom and then a room across the hall with two single beds, the bare bulb swinging at our entrance.

"Due!" the man said, and laughed, pausing to leer a little, it seemed to me, before shuffling away.

I quickly shut the door and locked it with a feeble-looking hook, ignoring J.'s exclamations about how he could see freighters out the window, over there. After first checking underneath, I sat down gingerly on one of the beds. We shouldn't have been so precipitous at the train station. We should have made a plan. We should have just stayed put. I began perusing the guidebook, a dire and chirpy "Let's Go," which I'd bitterly renamed Let's Not.

Rejecting the budget choices and zooming straight to moderate range, I settled on the Stella pensione. Tasteful hardwood furnishings, the book said. That sounded nice. Double and single, with or without bath ... charming location, close to station ... Previous guests recommended the rooms overlooking the sea.

"Pensione Stella," J. said. He had pulled back the cover on his bed and was reading the faded pillowcase. He lay down and sighed contentedly.

I put down the book and looked around me.

Well, there was a wooden desk. And a kind of wardrobe thing. Maybe I'd hold off a bit before announcing my relocation plans. I rummaged through my bag and found my vial of Woolite. Actually, the room was not bad. I felt the rumbling basso continuo of a ship's engine, heard the blast of a horn. I found my antiseptic face-cleansing pads. There was a certain unique quality to this place. I found my modest stash of Tanqueray in its extra-slim flask. That man had been amusing.

I regained equilibrium and began to relax. We were in the book. And being placed didn't feel all that bad. Usurpation of experience? Be my guest! This story was ... ordinary. (We could save the drama for the retelling.) If verification means obliteration -- as I'd been known to propose -- fine. Tonight was timeout for theory. Bring on oblivion! Better to be a conventional entry, though, than a witless statistic. I yawned, beginning to feel blissful, and eased toward an optimum sleep.