In the dark comic world of "American Psycho," pop is an essential soundtrack to murder. 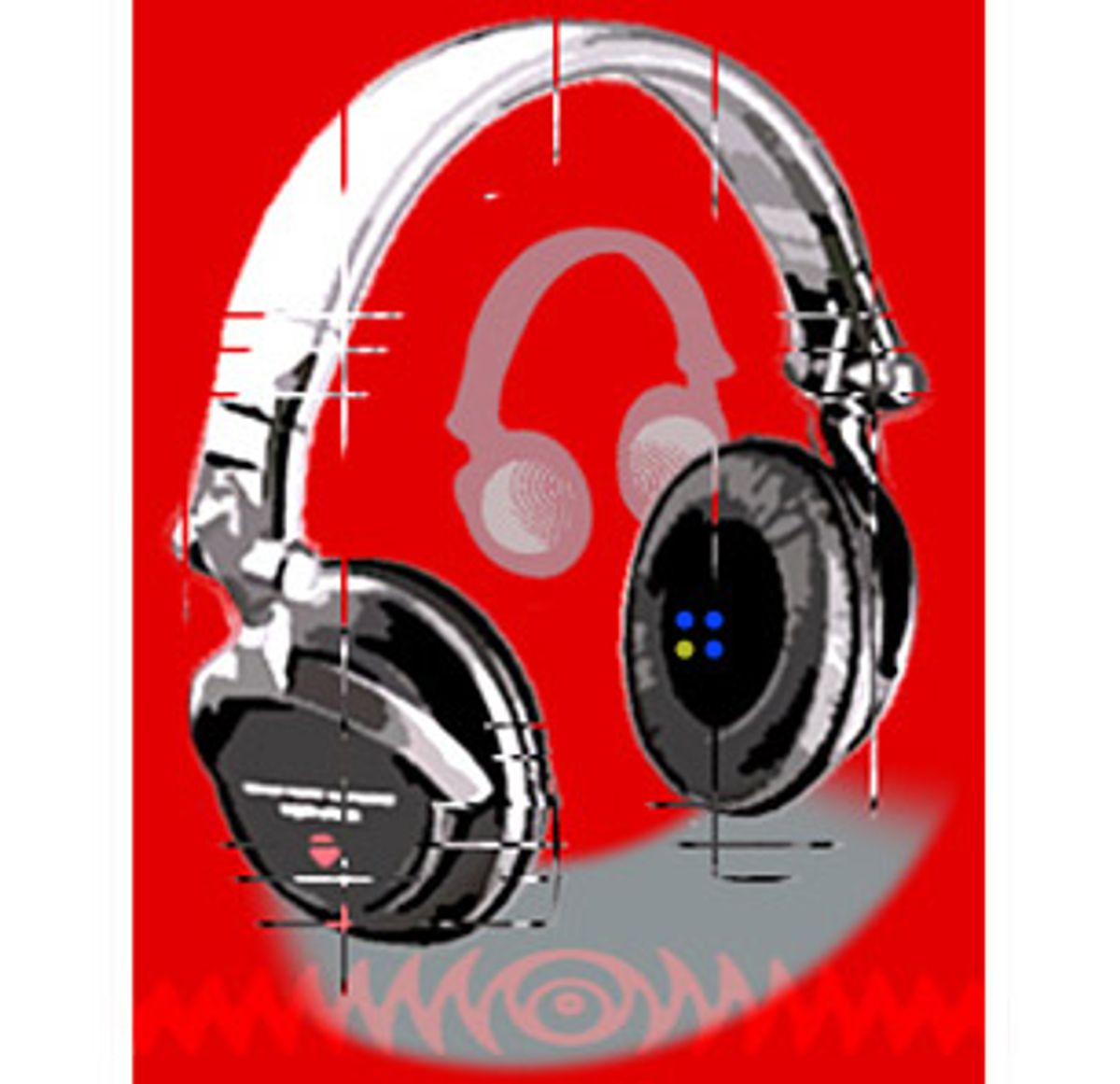 In Bret Easton Ellis' 1987 novel "Rules of Attraction," Paul, a college student, describes the records playing at a party. "The Pretenders turn into Simple Minds," he muses, "and I was grateful because I could not have stood there if there had been no music." The Ellis oeuvre is full of playlists, beginning with his first novel, "Less Than Zero" (named after Elvis Costello's first single). He writes very noisy books: MTV in bedrooms and living rooms; tapes and radios cranked up in cars. And Paul's words -- the idea that Ellis' mostly aimless characters' lives would be unbearable without a soundtrack -- hint at something we don't like to talk about when we talk about entertainment.

People who care about pop music, and I am one of them, like to discuss songs as liberators, as catalysts, as jokes or friends. But what of the term background music? Just as often, probably more often, listeners use music as a kind of stopgap. I like to think of fandom as a way of being in the world, but so often it's a way of avoiding the world, a barrier, a wall. Witness the witty scene in the new charmer "High Fidelity." In that film version of Nick Hornby's novel, John Cusack's Rob, a record-store owner, holes up after his girlfriend's left him and tries to put it out of his mind by reorganizing his record collection "autobiographically." He sits among his stacks of albums as if in a fort.

Ellis writes deftly about people who shouldn't be doing what they're doing, and one way they live with themselves is by shutting off the silence that is the examined life's requisite. You cannot examine your life too closely if you've got "Walking on Sunshine" full blast on your Walkman, as serial killer Patrick Bateman (played by Christian Bale) does in the new screen adaptation of Ellis' "American Psycho." I always thought good people needed good music to make a good life, but do the bad-to-worse characters of Ellis' imagination need music to drown out the sound of their own consciences?

Another novelist, Richard Price, seems to think so. In "Freedomland," Brenda Martin, a character inspired by the Susan Smith case, is suspected of killing her young son. When this damaged woman doesn't have soul CDs screaming out of her boombox, she's wearing a Discman and hearing them on headphones. "She was listening to something now, staring straight ahead and moving her lips to the lyrics," Price writes. "Lorenzo [the detective assigned to her case] could hear 'Feel Like Breaking up Somebody's Home' coming through her phones, minute and metallic. He didn't hold the music against her, figuring that the phones were there to keep her brains from leaking out her ears."

Is that what Katrina and the Waves are doing for "American Psycho's" Bateman? Keeping his brains from leaking out his ears? In another scene in the film, Bateman's in a limo with his Walkman on, his girlfriend beside him. "I'm trying to listen to the new Robert Palmer tape," he says, "but Evelyn keeps buzzing in my ear." The book, to my mind Ellis' funniest, is loaded with instances of music getting in the way. For example, Bateman, talking to an acquaintance at a club, narrates, "Luckily, the long version of 'New Sensation' by INXS drowns out his voice." Or, at the same club -- and this is in the movie also -- "Pump Up the Volume" (a title that might be the secret theme of the Ellis oeuvre) covers up the words Bateman's sneering at the bartender: "You are a fucking ugly bitch I want to stab to death and play around with your blood." He says this while smiling.

In the novel, some of the most hilarious bits are the periodic chapters in which Bateman delivers veritable "Trouser Press" entries on his favorite musicians. He loves Huey Lewis and the News, Phil Collins and Whitney Houston. There were times in the '80s I heard their records and thought you'd have to be crazy to like them. Psychotic, actually. What genius that a stuck-up, insane, murderous yuppie would call Houston's "The Greatest Love of All" "one of the best, most powerful songs ever written about self-preservation and dignity."

Of course! "The Greatest Love of All," lest we forget, posits that the greatest kind of the grandest emotion is not romantic true love or the love of a parent for a child but "learning to love yourself." It is probably the most solipsistic pop tune ever written, and that's why Bateman likes it. As he says, "Since it's impossible in the world we live in to empathize with others, we can always empathize with ourselves. It's an important message, crucial really, and it's beautifully stated on this album."

The genius of director Mary Harron's film "American Psycho" is the way she juxtaposes Ellis' musical tirades into the action. In the movie, she has Bateman delivering his manifestos while he's killing people. Harron's comic timing is impeccable. Now, when Bateman's talking up Huey Lewis and the News he's jabbering that their album "Sports" is "a personal statement about the band itself" as he ax-murders a guy. After he's finished the guy off, Bateman absorbs "Hip 2 Be Square" with blood all over his face; he lights a cigar, and -- something Ellis would probably never let him do -- actually listens to the song. Even though sometimes the reader feels like Ellis is letting Bateman get away with murder, the author punishes his protagonist: He has no peace; and despite the fact that Bateman shall have music wherever he goes, it's Collins' "Sussudio," which strikes me as punishment enough.

Regarding Ellis' "Less Than Zero," Greil Marcus once wrote, "In 'Less Than Zero' pop music is just weather -- everybody talks about it but nobody does anything about it. You don't know what Clay or his friends get from it, what they want from it, why he turns on MTV every chance he gets. The constant pop-song references bounce off the flat surface of the prose: no song ever plays."

I think part of the reason Ellis douses his characters with music but hardly ever lets them engage with it is because they don't deserve that kind of joy. Ellis is a father who grounds his children and unplugs their stereos as punishment.

One reason I love Ellis' books, and those of his confrere Jay McInerney, is that they have little to do with me. I started reading them as a youngster in Montana in the '80s and their coked-up, nihilistic nightclubbing New York was as foreign to me as a National Geographic photo spread. That was their appeal.

My culture was lovable "Young Fresh Fellows" songs ("When I'm down I think of you/My friend Ringo," went my favorite), camaraderie and cheap beer. And I think books like "Bright Lights, Big City" and "American Psycho" were written for relatively stable, relatively nice people like me. Because the fucked-up cokeheads the books are frequently about wouldn't have had the quiet time, not to mention the quiet minds, to actually sit still and read. Remember how the protagonist in "Bright Lights, Big City" was always meaning to spend the evening at home, ensconced with the great American novels?

If debased characters like Bateman and, by extension, debased people need heartfelt music and heartfelt culture, heartfelt people need representations of debasement. It's cathartic. I can't tell you how amusing it was to read Ellis' and McInerney's friend Tama Janowitz's book "Slaves of New York" -- filled with characters whose life decisions are dictated by the insane Manhattan real estate market -- lying in bed in my $92-a-month Montana apartment.

If we Montanans got a lot of cheap thrills rubbernecking at Ellis' and McInerney's barren New York and L.A. in the '80s, we got what we deserved in the '90s, because after all those rich New Yorkers and Angelenos got out of rehab, they went straight to Montana, jacking up the property values so that I'll never be able to afford a house in my formerly cheap hometown.

But of course, the New York novelists are on that tip, too. In McInerney's last book, "Model Behavior," a journalist who writes celebrity profiles brags, "Already my word-processing program contains macro keystrokes which instantly call up such phrases as 'shuns the Hollywood limelight in favor of spending quality time with his family at his sprawling ranch outside of Livingston, Montana' (CNTRL, Mont)." Takes me back to 1989: I was at work at the ski hill, wiping down the bar in rhythm to the Rolling Stones, and in walks Dennis Quaid, of the Livingston Quaids, asking for a beer.