Two new books serve up hair-raising histories of maritime cannibalism with all the gory details. 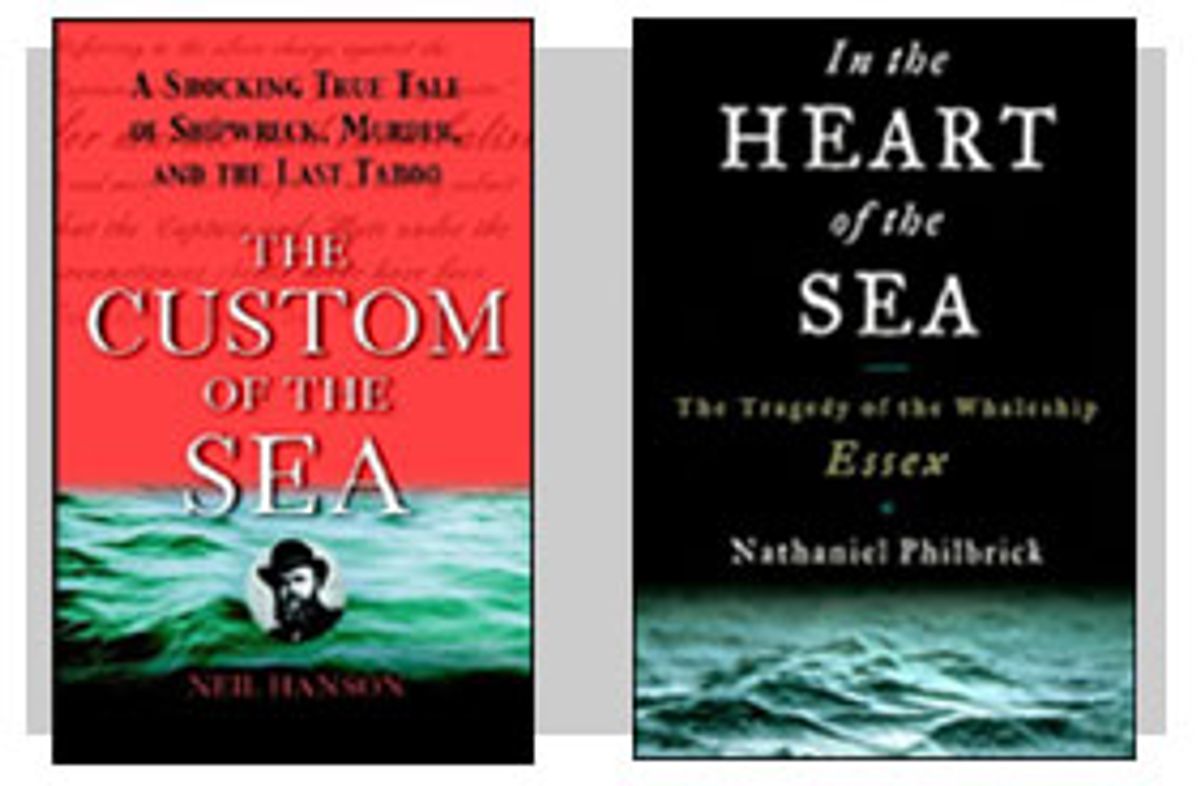 Life gets cushier all the time. Every month or so the wired world crosses another threshold of ease, and now we don't even have to stir from our mouse pads to get sorbet and videos: Point and click at someone further down the food chain and the fruits of privilege will appear.

But in the land of plenty and the age of comfort, sometimes it's hard to get our rocks off, and that's where the suffering of others comes in handy. The past four years have seen a boom in danger porn. Around the time that even Grandma got e-mail, the public developed a taste for painful accounts of physical ordeals heroically endured by someone else. Danger-porn voyeurs peep from a safe remove as proxies battle "The Perfect Storm" or launch themselves "Into Thin Air." The more strenuous the travail, the more alien it is from our cosseted lives, the more titillating it seems.

The safest distance is the distant past -- rife with bummers, free of vaccines and anti-lock brakes. Two new contenders for the danger-porn canon raid the 19th century for twin ordeals so impeccably awful and so damn gross that the movie versions were probably cast before the book contracts were dry. "The Custom of the Sea" and "In the Heart of the Sea" are, as the former's subtitle proclaims, "shocking" true tales of "shipwreck, murder, and the last taboo." Both books tell a story of terrified, starving sailors who, adrift in open boats, are forced to kill and eat their companions.

Survival cannibalism was once so common that it was "The Custom of the Sea." Neil Hanson's book of that name recounts the most notorious instance of this custom in British maritime history. Off the coast of Africa in 1884, a freak wave crushed and sank the Mignonette, an unseaworthy yacht bound for Australia. Three crew members survived in a dinghy for four weeks by killing and devouring a 17-year-old cabin boy, Richard Parker. Rescued by a German steamer, the men of the Mignonette returned to a sympathetic British public and a government determined to prosecute.

With appropriate penny-dreadful gusto, Hanson exploits every blood-drinking, marrow-sucking, human-jerky-curing moment. The Mignonette's captain, Tom Dudley, a former ship's cook, did the butchering: "He reached into the still warm chest cavity and pulled out the heart and liver ... The three men ate them ravenously, squabbling over the pieces like dogs." Trial transcripts and contemporary newspapers aid Hanson's poignant re-creation of the crew's emotional voyage from horror to elation to a second round of torture courtesy of Queen Victoria's courts.

What lifts "Custom" above the tabloid, however, is Hanson's evocation of context. He relates the history of maritime cannibalism in one sleek chapter. He makes a strong case that the Mignonette and the 560 other British vessels that sank that year were victims of greed: Their owners had no incentive to keep them seaworthy because lost ships meant big insurance paydays and no wages owed to the sailors. The Mignonette disaster had a still larger social significance because the show trial of the survivors was the Crown's attempt to end the custom of the sea forever.

"In the Heart of the Sea" has no such significance to justify it, but it does have a higher body count. Nathaniel Philbrick's book centers on the 1820 death match between Nantucket, Mass., whale hunter Essex and a really big whale, which the Essex lost. Twenty men in three small craft escaped and wandered the Pacific; three months later there were two boats and five men left. Rescuers found bug-eyed stick figures hunkered over a pile of human ribs, with finger bones stashed in their pockets.

Had Philbrick needed a reason to revisit this gorefest beyond the mere gnarly fun of it, he might've chosen metaphor. Never before had a whale rammed a ship, and it was as if a lone titan were finally protesting a holocaust: The Essex was hunting west of Chile because Nantucket's whalers had scoured the Atlantic clean. Metaphor, however, was taken -- the 85-foot bull that sank the Essex inspired "Moby-Dick."

Philbrick grasps instead at historical context -- and misses. Issues handled ably by Hanson elude him. For example, Hanson notes that in eating the cabin boy, the Mignonette trio followed a second custom of the sea. Though tradition required drawing lots, over the centuries the short straw seemed to have a strange attraction to women, boys and blacks. On the Essex, a third of the crew was black, and not one black sailor survived -- but Philbrick never mentions the long record of rigged contests or fully engages the possibility of bias.

Unlike the case of the Mignonette, the Essex case is notable only for sheer calamity. It didn't spark a shift in the whale trade or set a legal precedent. Philbrick masks this lack of meaning with a lot of talk about Nantucket. His asides about local quirks and lingo turn from irrelevant to annoying, but as a loyal islander Philbrick keeps them coming. Why should we care that in 1997 some kids from Newburyport cut up a beached whale? Just because Newburyport "was where many of Nantucket's first settlers had come from"?