The Sex Pistols were one of the 20th century's best bands -- even if they (and we) were too dumb to know it. 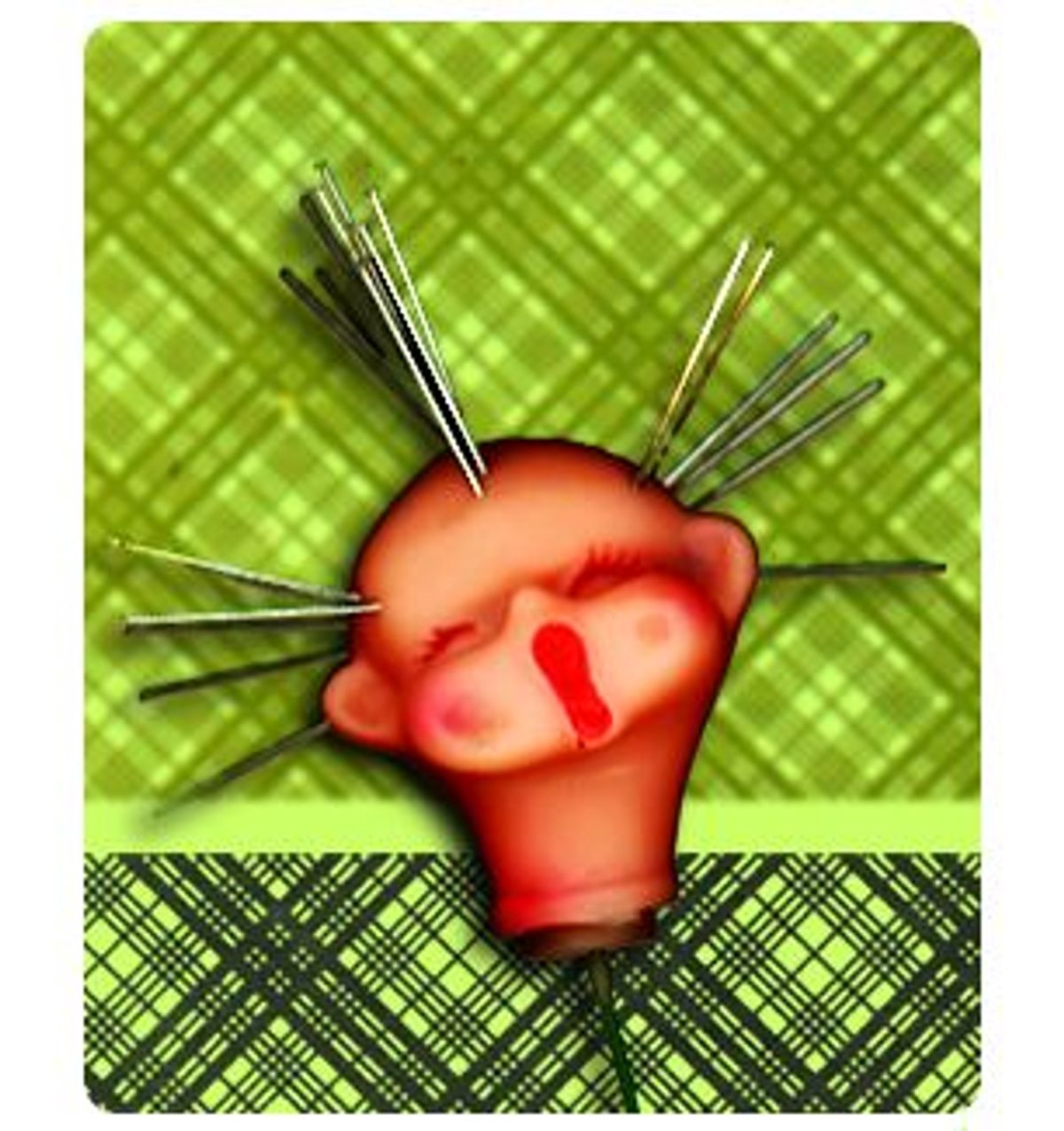 Wolp, when, loik, I was, loik, 14? It was so cool to whar, like, torn-up ponts and, loik, bondage jewelry and, loik, put all kinds of shit in your har, loik, egg whites and Aqua Net? And hahve, loik, this accent where all the a's are pronounced "ah" and everything you say sounds loik a question? And do all kinds of, loik, methamphetamines? Which me and my friends called McKmothamphibimammals?

And it felt so cool to be one in a pack of many such attired teens walking high, wired, drunk, illegal, truant, loik, a fugitive, yah, after a punk rock shew in, loik, the middle of the night and, loik, write the name of your fictional skateboard team (i.e. Crew Burgie!) on a wall in a tunnel in the bus grime with your finger? It was se-oo cool. Those were the righteous sweet days of, loik, youth?

Do I miss them? Nope.

We were all horribly depressed, debased, self-medicating miserably, the blind leading the retarded leading the unable-to-walk down squalid, spray-painted hallways into frightening restrooms. A pack of overprivileged yet deprived lower-middle-class teenagers fallen through the cracks of the societal porch and becoming sad, gutless, soft, dumb, unambitious and ineffectual monsters-under-the-house, most of whom would either die ignominious deaths before they hit 30 or become lifelong addicts with incurable problems.

Somebody was always having a seizure in the corner; somebody was always passing out or throwing up or crying or ripping you off or some such other loathsome thing. Everyone's parents were mortified, but apart from that heady accomplishment it was all superpathetic.

The other night I saw the Sex Pistols movie, "The Filth and the Fury." Ah, Johnny and Sid, they started it all, those glorious "cunts" -- all those threatening teenage hairdos and turbo-rebellion, in every fair city with ugly kids. The New York film audience was full of pudgy old post-punksters who had gone to A.A. and N.A. and could now support themselves and were still mildly hip looking: thick black glasses, the occasional batch of noncorporate facial hair, the black vintage jackets. One tattooed bald guy in his mid-40s with a goatee had a black T-shirt over his potbelly with the slogan, "While you're down there."

There we were, getting all excited as the first few licks of "Bodies" came in over the speakers, watching docu-footage of our precious youth, our stars -- Rotten and Vicious -- and they looked so cute, like little kids. Darling, even. Mischievous little angels -- not at all the threat to the sanctity of Western civilization that they were once thought to be.

The music, instead of having the aggressive, scary twang it once had, the sound that told everyone to get the fuck away from you, sounded, well, really good! Melodic, even. Interesting chord changes and everything! "Never Mind the Bollocks, Here's the Sex Pistols" is actually an incredibly fantastic rock album, one of the Top 5 of the past 25 years. Not just a "fuck you" manifesto up the bung of pre-Thatcherite England but a genuine wayward version of the Beatles, if you will. A British Invasion of a different color: anti-Beatles, filthy Beatles, but cute enough and good enough to raise the consciousness of those who saw them.

Well, if not raise it, at least shove it sideways.

"Filth" is a nice little documentary. At least it is finally a chance for the surviving Pistols to piss all over slimy manager Malcolm McLaren for all the rotten, devious managerial shit he pulled on them in their heyday, and to show a whole new generation of people how truly revolting Nancy Spungen was.

The famous footage of Spungen and Vicious hopelessly high on dope during that interview where he keeps dropping cigarettes on her looked kind of funny and pathetic to me 10 years ago, but now that I am a better judge of character it looks like a real screaming indictment. Spungen, the demon succubus, the tumor that killed Vicious and one of the best bands of the 20th century, as opposed to the other way around.

Vicious was clearly caught in the lead role of a rock 'n' roll destruction fable that he saw no way out of -- the sacrificial goat led up to the bloody table by McClaren and Spungen and the infernal abilities of the press to whip a tragic figure skipping and dancing toward his own mythic, untimely end.

Rotten, in the most human part of the film, breaks down quite heart-wrenchingly in the dark; in retrospect he thinks he might have done something, but he was too dumb at the time to know what.

I remember as a teenager reading "And I Don't Want to Live This Life" -- a sort of "Daughter Dearest" written by Spungen's mother, Deborah Spungen, after her daughter was stabbed to death at the Chelsea, about what a rotten kid Nancy was her whole life. She was a baby who constantly screamed and howled like a mangled animal, who was constantly plagued by night terrors and cold sweats like a POW with delirium tremens -- a violent youngster capable of a calculated evil that nobody had ever seen in anyone that young.

She was born wrong, with a soul full of torture and manipulation and an insatiable appetite for vice. When Spungen was a very young teenager, her mom would go through her room and find unmailed postcards to boys that said things like, "By the time you get this postcard we'll be high on windowpane and fucking our brains out. Love, Nancy."

There was one photo that stood out in the photo section; it was of Spungen petting a rabbit in her lap on a bench at some kind of summer camp. "This is how I like to remember Nancy," said the note from the old friend who had sent the photo, but the bunny-petting girl sure as shit wasn't Nancy. Maybe for .06 seconds of her life, long enough for the camera shutter to close, but I wouldn't be surprised if she twisted the rabbit's head off afterward. Spungen was a real death bomb, a nearly perfect vagina dentata. A sublime example of the divisive, destructive tyranny of the weak. The manhole that ate punk.

"Filth" gave us nostalgia for the days when an adorable little rock 'n' roll fashion adventure could really scare the shit out of everybody. British Parliament freaked out heavily; fearful Christian people sung hymns outside of the coliseums to ward off the evil being generated within by the band.

Nowadays, musical nihilism has obviously reached its zenith in real-life mayhem ` la the many dead boys of rap. Puffy & Co. destroy their competition and their detractors, not themselves. And everyone is inured to shock rock to the point of dismal ennui and Marilyn Manson coffee mugs.

A joyous, vitally lame self-loathing and real subversion were at the center of punk, which gave everyone young and grotesque and disturbed a reason to go outside, to be a part of the revolution. And Rotten was so, so great. Absolutely perfect, a fusion of delirious, elfin prankstership, rowdy politics, great hair, nasal screaming, wonderfully creative, artfully moth-eaten sweaters. Truly an icon -- we never realized that Rotten was so sexy, nor Vicious, nor that the band ruled as much as the best Led Zeppelin album or the best Stones. Oh, those boys were truly delicious, especially in retrospect.

At the time, we were too dumb to know.

I went to the American Museum of Natural History in New York to see the exhibit "Body Art: Marks of Identity," because after I saw the "Fame After Photography" exhibit at the Museum of Modern Art last year, I said that if there wasn't a tattoo show in a New York museum in the next two years I would get one on my ass that said "malcontent." Well, there is a tattoo show, but it's at the natural history museum, so I guess that's a stalemate.

In front of the museum was a pack of highly androgynous skateboard kids. They all looked like boys -- spiky hair, baggy pants, baggy sweat shirts, spikes in nose, eyebrows -- but two of them were girls. At first I thought they were gay, and then they started making out lurid and crazy with two boys -- legs spread, backs against a statue, boys dry-humping them, tongues churning wildly behind cheeks.

Tourists from Ohio were terrified and covering the eyes of their small children. I was fascinated. They were rebellious teens from the MTV generation, in which no look is too outlandish to be co-opted, loitering outside the museum shocking people with their blatant, in-your-face sexuality. That's a newish twist, I thought, with echoes of 1968. But these kids weren't hippie loving so much as celebrating pornography: taking the shameful stuff out of Dad's dresser and exploding it on 81st and Central Park West.

Apparently, they weren't there for the "Body Art" show; nobody was, really. In fact, the show is a flop, which is too bad, because it is a really nice, elegant show. But it isn't lowbrow enough to curry the kind of interest that the motorcycle show at the Guggenheim had last year. This show, a nicely assembled batch of displays, from the head-flattening practices of the Chinook Indians to Zulu ear disks to sideshow tattooed ladies, doesn't have much oomph.

Rotten said of the early demise of the Sex Pistols, "The real stuff never survives. Only the fake stuff survives [in the music industry]." We live in a time when the real stuff hardly ever gets to the starting line anymore. Everyone is too afraid of punishment, of alienating people, of lawyers and lawsuits and controversy and losing money, to ever do anything truly original and daring.

Well, fuck 'em, I say. Fuck 'em all right in the ear. You have to get a little bit of somebody else's blood on your teeth if you're ever going to say anything but "Yes, sir," and if all you ever say is "Yes, sir," you've wasted your whole goddamned life.

Johnny Rotten is an inspiration to us all.