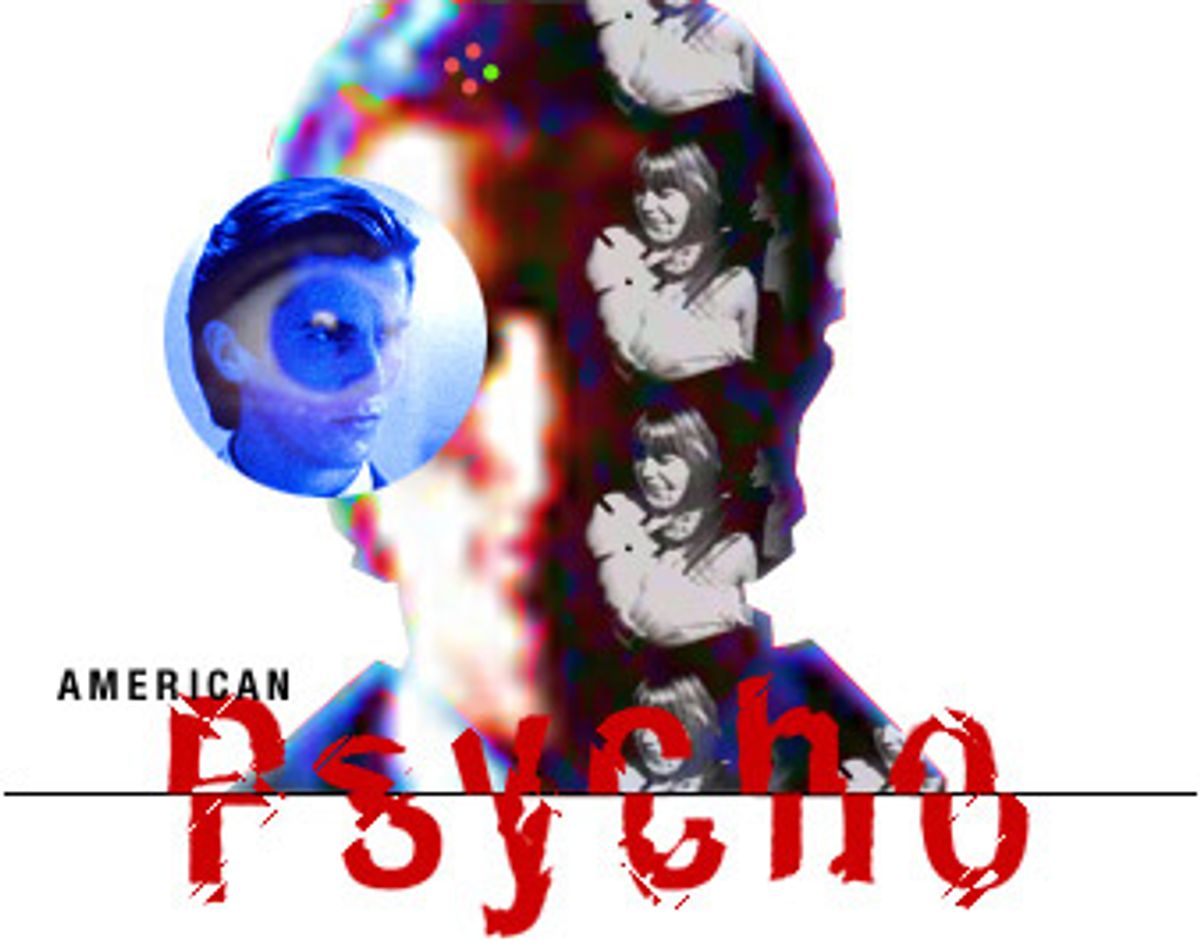 The '80s were an era of greed and corruption and unprecedented shallowness, aided and abetted by rancid pop music like Huey Lewis' "Hip to Be Square" and the inescapable horror of giant shoulder pads in ladies' suits. If this is news to you, then Mary Harron's "American Psycho," with its clinically ironic approach and awkwardly big-boned sense of humor, will be a highly edifying document. Then again, if you want a taste of the era you could just get ahold of a few "Family Ties" reruns.

If "American Psycho" worked better as a thriller or a comedy or some combination of the two, its reason for existing would be much easier to explain. As it is, the picture seems to exist solely for self-congratulation, as a kind of sacred text designed to remind us (as if we could ever forget) how ridiculous we all were some 10 or 15 years past -- and to toll a half-hearted warning, in darkly comic tones, that we may be headed that way again.

That's not to say that Harron isn't somewhat skillful: In telling the story of sharply dressed multiple murderer Patrick Bateman (Christian Bale) who treats killing as a lifestyle choice, Harron goes at the narrative's inherent violence with a light touch. Given the legendary grisliness of Bret Easton Ellis' 1991 novel -- which I've never been able to bring myself to read -- you have to be somewhat grateful that Harron makes the choices she does. Most of the movie's violence takes place off-screen: Harron outlines it with sound, or clues you in by showing you small details (Bateman's opening a drawerful of what look like dental tools, for instance) before or after the deeds occur.

But a filmmaker's tastefulness can be a double-edged butcher's knife. And feeling relief that a movie isn't as graphic as you feared isn't necessarily enough to make you like it. Harron approaches the violence in "American Psycho" so delicately that she ends up rendering it too remote and cool. She's made a passionless movie about a passionless man, and it's all supposed to add up to make us feel or even just think something, but what? The stylish, sleek surface is little more than a brittle device whose impact dissolves early on, the way a thin coating of ice on a puddle melts away to nothing in the sun.

Intelligent, urbane, detached and inexplicably bloodthirsty, Wall Street hotshot Bateman likes to spend time hanging out with his other hotshot friends, making misogynist remarks ("I know, I know, there's no such thing as a girl with a great personality") and talking about which restaurants have good bathrooms for snorting coke. (To any woman who was forced to engage in dating rituals at any time in the '80s, Patrick will probably seem only slightly scarier than his friends -- serial killings notwithstanding.) They go to meetings where they slide their business cards across shiny mahogany tables, trying to outdo one another by showing off their tasteful choice of paper colors (eggshell, pristine white) and typefaces -- a detail that's amusing in its first few seconds, but becomes less so as it stretches into an endless joke.

Patrick starts off by killing a business associate, Paul Allen (Jared Leto), after spreading newspapers around his apartment and donning an old-lady clear plastic raincoat -- he's nothing if not meticulous. But the people who figure most tellingly in Patrick's story are women: his secretary (Chlok Sevigny), a hooker he picks up on the street (Cara Seymour), his fiancie (Reese Witherspoon) and the woman with whom he's having an affair (Samantha Mathis). As he dallies with each of them in one fashion or another, detective Donald Kimball (Willem Dafoe) starts coming around to his office to quiz him on Allen's death, slyly waving around evidence that suggests he knows full well that Patrick is the killer. But is he really?

All the while, Patrick's voice-over clues us in to his emotional state, starting with a shower monologue in which he details every product he uses on his face and body during his morning toilette. His hyperacute physical fastidiousness is the first clue that he's obsessive and unhinged, but in case we haven't gotten the idea yet, it's not long before he comes right out and tells us what's going on: "I think my mask of sanity is about to slip."

Everything in "American Psycho" (written by Harron and "Go Fish's" Guinevere Turner, who also has a small role in the film) is a broad joke: Patrick's bachelor pad, which seems to be 99 percent stainless steel; the way he and his pals detail menu items they've recently ordered ("sea urchin seviche"); the way he deadpans, when a woman asks him what he does for a living, that he's "in murders and executions." When he takes a leak at home, we see his face reflected in the glass of a framed "Les Miz" print that hangs above the toilet -- it's an everyday act mirrored in a symbol of the roiling generic middlebrow "us." Heavy, man.

Later, the jokes get even broader -- but it's no less than you'd expect from Harron, whose 1996 "I Shot Andy Warhol" showed little understanding of the Warhol era other than as a backdrop for excessive parties and the deeds of a crackpot assassin, Valerie Solanas, whom we were supposed to have sympathy for. In "American Psycho" we see a head wrapped in plastic on a shelf in the fridge, and bodies hanging in a closet like an army of Armanis -- all shown to us in sudden flashes for an intentionally cheap effect, as if we'd suddenly wandered into an Italian splatter-horror fest.

Harron's hall of mirrors is no place for the fine actors she has lined up here. Bale, who's been terrific in pictures as diverse as "Newsies" (highly entertaining, and not just for the delicious irony that Disney should make a pro-labor musical) and Todd Haynes' "Velvet Goldmine," gives it his best shot, but he's undone by a script (and an overriding conceit) that turns him into nothing more than a mechanical man, a walking in-joke. Somehow the actresses do much better in rising above the material, particularly Sevigny as Patrick's gangly, sensuous-but-sweet secretary, and Mathis who, in one small, sensitively played scene, says more about the misogyny of Patrick and his cronies than any number of crude remarks or disembodied heads could convey.

And then there's the soundtrack. Patrick is a pop-music aficionado, as adept at discussing the shortcomings of Whitney Houston as he is at singing the praises of Phil Collins' "Sussudio," and he likes to regale his victims with impromptu critiques as they wait for the ax to fall. Huey Lewis has reportedly withdrawn his "Hip to Be Square" from the "American Psycho" soundtrack album, in protest of the movie's "violent" content. It's something of a misguided gesture, considering how toothless and empty "American Psycho" is, but you can't really blame him. Maybe it is hip to be square. But it's never hip to be hollow.