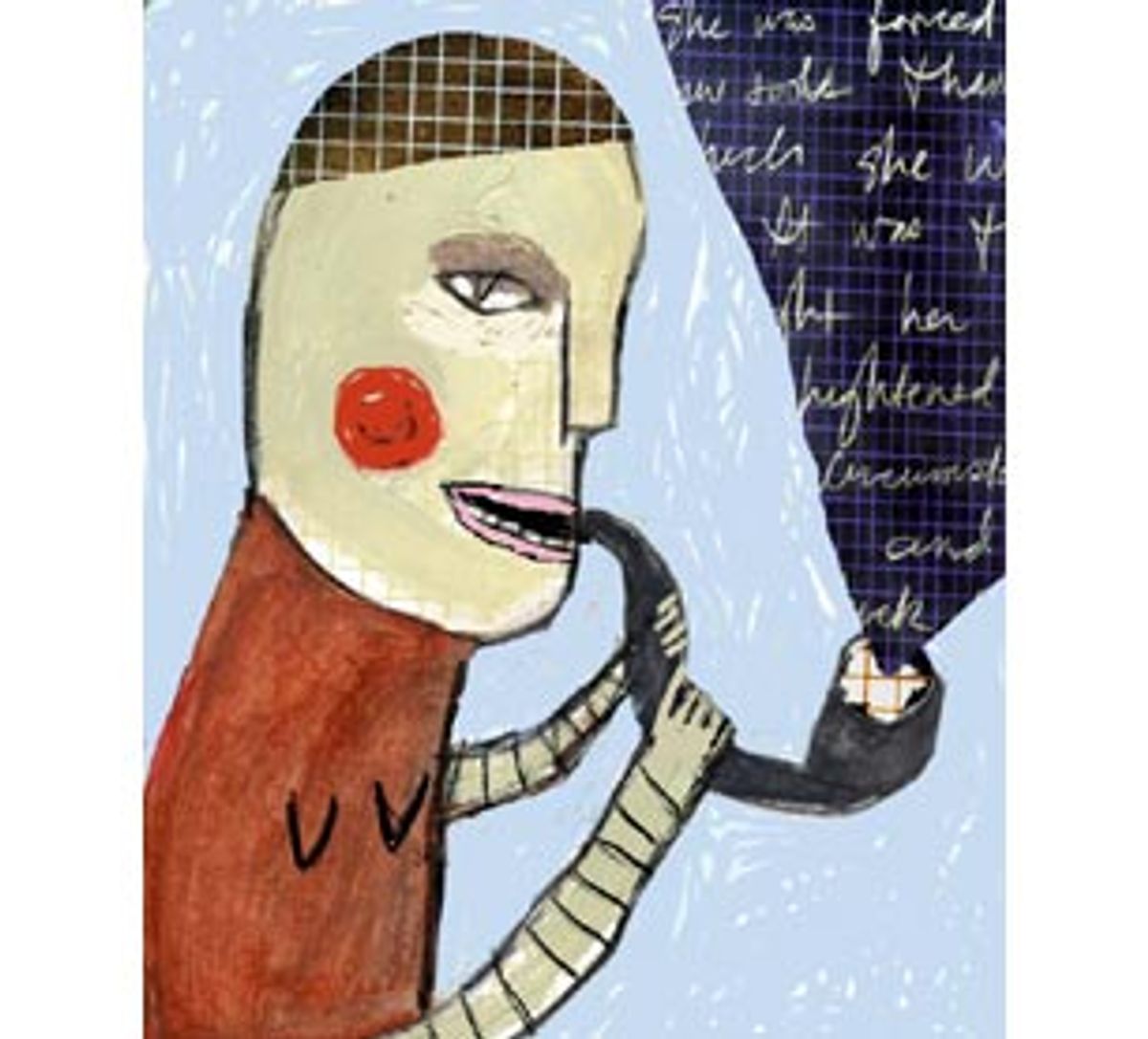 Ah, love. Who among us hasn't hung onto a few of the spoils of romance gone by -- letters tied with fraying, faded ribbon, sappy records, baubles abandoned to the darkest reaches of the jewelry box? And who among us doesn't pull these items out once in a while, perhaps on a rainy Sunday afternoon, to ponder the people we were when we received them and the inevitable disillusionment that led, later, to new loves that suited us better, or perhaps worse?

I, too, am a hoarder of such mementos, and my collection includes a small, tattered paperback that I got in fifth grade, when I really fell in love for the first time -- with poetry.

The book is called "On City Streets" and it sold for a whopping 75 cents. Its cover has a photo of a boy sitting in the street, drawing with chalk, and the book is subtitled "A Remarkable Collection of Poems and Photographs That Captures the Heart and Soul of the City and Its people." In the pages of this anthology, I discovered a poem by someone named Patricia Hubbell that enchanted me in a way nothing ever had before:

We walked in the street on Joralemon Street.

Brightened the flats on Joralemon Street.)

The sun rode the brownstones

A short pace away.

And turned before setting the night on the day

To wave us a shadow that banded the street.

He slid from the housetops

Leaving night in his place on the husk of the day,

And we walked in the shadows along the dark street

And knew how geraniums smell in the dusk.


The poem's primary fascination for me was the word "Joralemon," which I pronounced (incorrectly) "JOR-a-LE-mon," like the citrus fruit. I didn't know and didn't care where this street was, or even if it was real -- it existed in my head.

But, as is the case with all objects of affection, the mystery was due to unravel at some point. Years later, exiting the subway in Brooklyn, N.Y., to visit one of my other first loves, a boy this time, I found myself on Joralemon Street. I can't help thinking that this was no coincidence. The odd thing was that the poem came back instantly, overpowering the reality of what was in front of me. It was winter, but I could almost smell geraniums in the air. Though I hadn't opened it in some time, I had held onto "On City Streets," and I've continued to cart it around since, feeling that its presence in the many homes I've made is somehow essential to my existence not only as a poet but as a person. Though "Joralemon Street" isn't the best poem ever written, not by a long shot, it's a marker of my entry into language. Even now, when I should supposedly know better, when I read Rainer Maria Rilke and T.S. Eliot and I know how to pronounce "Jo-RAL-emon," I can't quite seem to get over it -- the mark of a truly searing affair.

These, then, were my beginnings as a writer, and in light of this rather humble first love of mine, I was nothing short of delighted when I received a copy of "First Loves: Poets Introduce the Essential Poems that Captivated and Inspired Them," edited by Carmela Ciuraru. Amid the crashing din of National Poetry Month, when publishing houses produce a small landslide of new books, many of them quite wonderful, but far too many to pay attention to all at once, what a joy to be presented with this one, modest book that gets right to the heart of the matter. It responds to the eternal question, the one that always pops up at readings: How do great poets start to become poets? Who, and where, were they when they felt those early stirrings of verse?

There are, of course, any number of false, pretentious ways to answer this question. Often people who have been in the limelight for a long time lose their capacity to come out of it, even for a moment. Amazingly, however, Ciuraru has coaxed some of the world's most revered poets into admitting that they didn't spring from the womb reciting Shakespeare and Shelley and Stevens. Even those who did have the presence of mind to fall in love with great poets right off the bat are not entirely sure why it happened.

Eavan Boland, one of Ireland's best contemporary poets, selected W.B. Yeats' gorgeous "The Wild Swans at Coole" for "First Loves." Certainly this shows signs of precocious taste, but she doesn't claim bragging rights, instead recalling her confused teenage self riding the bus to buy the "Collected Poems." She wasn't, she tells us quite candidly, "a particularly bookish teenager. And so I remember the long bus journey -- the sight of the coast when I was leaving and returning, the bracelet of lights in the distance toward Bray -- much better than why I went to buy the book." There were no lightning bolts for Boland, no moment of revelation. She wasn't even Yeats' "inevitable reader. I was hardly more than a stranded teenager, home from London and New York, back in Ireland after years away at the supremely inconvenient moment of 14 years. Unable to name the country I came from ... I felt awkward -- an impostor."

When Boland finally comes up with the reason she loved, and continues to love, Yeats, it's anything but erudite. In fact, it concerns the most fundamental of human instincts -- the need to belong. In Yeats' words, Boland writes, she "began to hear something different -- the sound, at last, of a place where I might no longer be an impostor. A place that could be made exact in language and therefore hospitable to the very degrees of estrangement I felt." She makes loving poetry, even becoming a poet, a matter of creating a home in the world.

Boland's numbers among the more serious entries here. There are also some wonderfully glib responses from people who gleefully chucked dignity out the door and simply told the truth. We get A.R. Ammons as a fifth-grader, memorizing a distinctly grade-schoolish poem called "In Flanders Fields" not because it stirred him but because he wanted the apple his teacher was giving away to the first person who could complete the task. "I don't know that I loved the poem then," he writes, "but I loved the apple and gradually, I suppose, associated that with poetry." (Incidentally, there are various English teachers mentioned in the anthology, all of them with fabulous names -- Ammons' was Viola Smith, and Philip Levine remembers a certain Miss Tarbox. Perhaps the real key to becoming a poet is having a teacher with the right kind of name.)

Even many of the writers who've selected serious poems as their official picks use their introductory essays to take us back in time to their earliest awareness of words. "My mother claimed that the first poem I adored was Vachel Lindsay's 'The Moon's the North-Wind's Cookie,' which she read me from an anthology called 'Silver Pennies,'" writes Donald Hall. By the time he was 14, he had discovered H.D., and he includes one of her poems as his selection, but it's hard to entirely forget his earlier, less glamorous love, which makes his entry here all the more valuable. Similarly, Daniel Halpern paints a boisterous and charming portrait of himself as a toddler bellowing song lyrics as he makes his way toward the Wallace Stevens poem he includes:

Before I acquainted myself with actual poems, I fell in love with song lyrics. At three, I played "That Old Black Magic" and "Cocktails for Two" by Spike Jones over and over on a "starter" record player at five in the morning ... And in the late afternoon I rode my tricycle back and forth outside the house in which I was born in Syracuse with a strange fierceness, singing the songs of our armed forces (my father was a B-52 navigator during World War II): "Anchors aweigh ...," "Off we go, into the wild blue yonder ..."

And speaking of lyrics, Eleanor Wilner has the guts to come right out and lay claim to "The Lady Is a Tramp" as her first favorite poem. "Not poetry, you say?" she jeers in her essay. "Back off. It was the Midwest, the middle class, mid-century America ... The great song lyricists were my first poets, and musical comedy was my text."

There are many choices here that wouldn't make it onto any fancy lists of poems. Carol Moldaw writes about slipping her first copy of e.e. cummings' "Collected Poems" into a box being packed up by a boy she liked when she was 17. "What better way to signal -- though I knew we might never see each other again -- the intensity of my unsung passion?" The relief I felt when I got to Moldaw's page is hard to describe. No one ever admits to loving cummings -- no poet wants to be caught appreciating hopelessly sentimental poetry that was in a Woody Allen movie -- and yet we've all loved it. I spent about a year obsessing over a group of cummings poems simply because I was madly infatuated with the person who read them to me over the telephone. (One of them, in fact, was about hearing the voice of your beloved over the telephone, which is a perfect illustration of why cummings poems lend themselves so well to romances of the Highly Dramatic Type.) I still like to read cummings sometimes, just to loll in the memories of being a teenager in reckless love. As Moldaw, who chose cummings' "i thank You God for this most amazing," finishes up her essay: "What poems could be more like first love itself than cummings', which vibrate in their certainty of every moment's and each emotion's uniqueness?"

Because the truth is that poets, just like everyone else, are fools when they fall in love. The essays in "First Love" that speak the most clearly about how one becomes a poet aren't really about poetry at all. They're about muddling through life and looking for people to help you figure out what the hell is going on in your heart. Some people just take the guidance, and others, as Marie Howe writes about reading Gwendolyn Brooks, think, "Oh I want to do that -- what this woman here has done."

Most important, "First Loves" demonstrates something that John Cheever wrote about in his brilliant, wrenching journals (which have as much claim to the title "poetry" as anything I've ever read). "There is some wonderful seriousness to the business of living," he jotted down in 1958, "and one is not exempted by being a poet. You have to take some precautions with your health. You have to manage your money intelligently and respect your emotional obligations. There is another world -- I see this -- there is chaos, and we are suspended above it by a thread. But the thread holds."

No matter how easy it is to believe that gifted poets do nothing but wander through the world accepting prizes and reading in sonorous voices, viewing everything through the sublime prism that produces their work, the truth is that they pay taxes and buy gas and groceries just like the rest of us. They bungle their "emotional obligations" -- often spectacularly -- and make mistakes and have to start over again, too. Perhaps what makes "First Loves" such a rare achievement is the way it slipped in behind the scenes and came back with the message that to be a poet is simply to be a person who never stops falling in love with the world, whose world is big enough to include even those things we love in spite of ourselves.