Reactions to stock carnage: "The bubble has burst"

Believers in a prosperous "new economy" weigh in on the market's relentless decline. 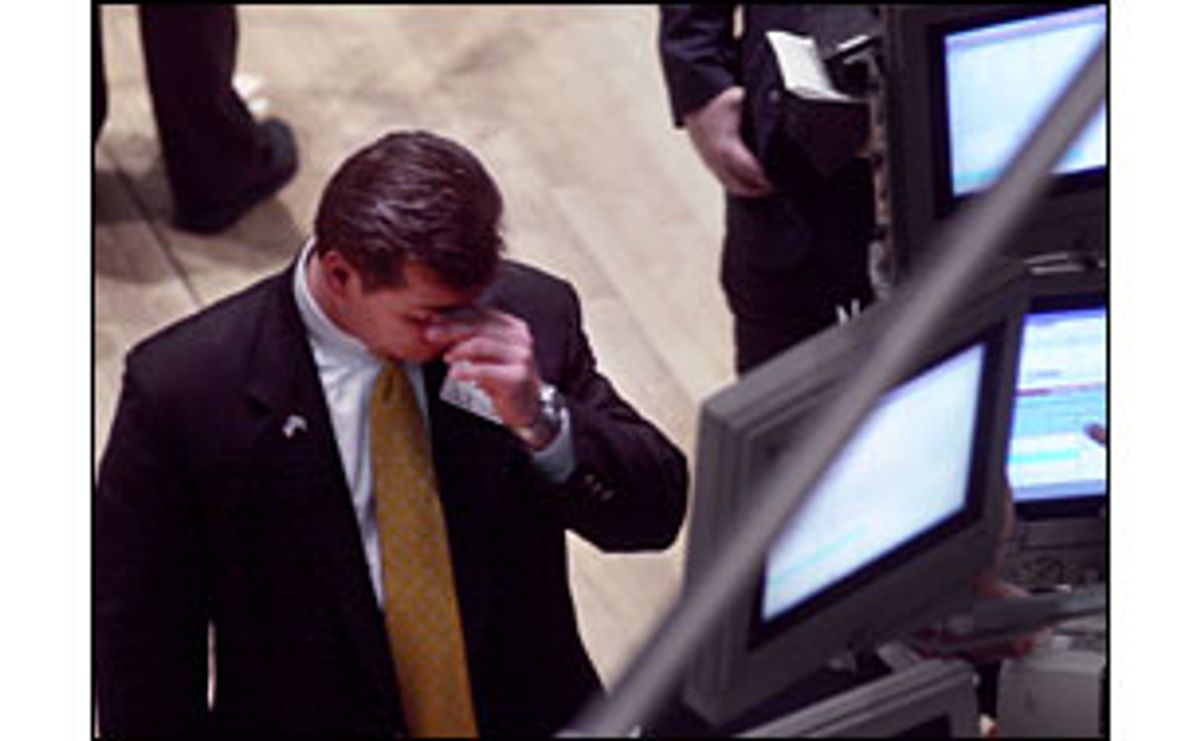 Both the Dow and the NASDAQ logged their biggest single-day losses ever on Friday. The Dow Jones industrial average declined 617.78 to 10305.77, a loss of 5.66 percent, while the NASDAQ composite index went down 355.49 points, a loss of 9.67 percent. Here are some reactions to the bloodbath:


Chairman of Red Herring Communications and co-author of "The Internet Bubble: Inside the Overvalued World of High-Tech Stocks -- And What You Need to Know to Avoid the Coming Shakeout" (Harper Business, November 1999)

Clearly, the bubble has burst. I think things will never be the same. I think a lot of the Internet companies that shouldn't have gone public have been found out and you won't see them go back up. What's happened is a lot of people have lost a lot of money. I think it's going to scar people for a long time, and they're going to realize that it's now back to fundamentals. It's back to rationality.

The bottom line is that I think that there was this game of musical chairs almost, that was being played. I think that intuitively people knew that the market was artificially propped up, but everyone has been making so much money in the market in the last two or three years, so no one wanted the music to stop and it kind of took on a life of its own. E-tailing companies plus the Web media companies got caught recently.

The e-tailing companies were caught with people realizing that they're never going to make the kind of profits that a Microsoft or a technology company would. As for the Web media companies: When AOL merged with Time Warner, it was kind of like the smartest guy in the Web media business, Steve Case, was saying that in order to move forward successfully I need old economy capability. So, a lot of these pure-play Internet media companies, such as TheStreet.com and iVillage, got kind of left hanging out there.

Also, the Microsoft trial was more psychologically damaging to the high-tech blue-chip market. Obviously, the market is moved by psychology. Nobody wanted the party to end. We suspended reality for so long, but psychologically people knew that it was too good.

Over 80 percent of the 350 companies that have gone public under the guise of the Internet are not showing profits. Because they don't have profits, it's hard to know how to value them. Amazon.com has been valued like Microsoft on steroids. The reason that Microsoft has a high valuation is that it has 37 percent to 40 percent operating profit margins, whereas a company like Amazon, which is just a distribution company, can never expect those kinds of margins. Microsoft is an intellectual property company. An Amazon is just a distributor -- distribution companies typically generate 2 percent profit margins. But since they weren't generating any profits, people didn't know what to expect, so they thought -- oh, maybe they're going to be the next Microsoft.

Co-author of The Long Boom: A Vision for the Coming Age of Prosperity

The stock market is a reflection of the economy, but it is not the economy. The fundamentals of the economy are terrific, have almost never been better. People are trigger-happy about this.

These new economy companies aren't just taking the technology alone and making it more productive -- the whole nature of work is becoming more flexible, efficient, adaptable. That's being factored into the health of the economy.

You've got economic innovation, global integration -- historical trends that have a lot of staying power and will be with us for a while to go. If you pull back from [this week's] situation, the fundamentals haven't changed at all -- there's no looming war, no backlash against the current trends. The fundamentals of the macroeconomic gauges with which you measure the vigor of an economy are all very solid.

But some stocks are totally rational bets, and some market leaders are extremely valuable companies that will only get more valuable in the next 20 years as they move into a truly global integrated economy. The Ciscos and the Microsofts and the Intels -- those are solid companies building the infrastructure -- are totally worth their valuation given the long-term view of transitioning the global economy towards the new economy model.

I think the thing to do is calm down, take a deep breath, look at the fundamentals and giant trends moving through our area, and understand that a correction is just a chance to take a second look and catch your breath. The idea of going into a free-fall is just a panic mentality, and is clearly not warranted. Maybe it will sober up over the weekend while people catch their breath; I think the bottom will be hit here and you'll see a bounce. A lot of people will have an opportunity to get in on stocks that have long term possibilities and the core fundamentals in place.

It presents a buying opportunity, but I really look at this as a result of Judge Jackson sending a chill down the spine of every venture capitalist and Wall Street investor. Because that case sent a message that a company can get big but not too big because government will make life miserable. People are thinking -- consciously or not -- that no company will be allowed to get as big as Microsoft. The decision was criminal. Jackson does not understand what he's done; he does not understand what he's doing.

Also, the market's gone down significantly because of margin calls: They get called in and investors have to sell so it spirals. So maybe this was the last of it or maybe it will be a few more days before it pops back up. But it won't pop up to where it was.

Still, the Web is changing the world economy no matter what: Wall Street can swing up and down, but the overall trend is toward value creation. No matter how Wall Street values these companies, there is still a tremendous amount of opportunity.

One other thing is that it might be possible that this [drop] is, in effect, a sign that companies are having trouble growing beyond a certain size because they're having trouble finding qualified workers. Companies like Hewlett-Packard may be limited in their growth because we haven't built our work force, our farm team. We've got to fix education -- put school vouchers in place to allow the population to become educated so they can participate in the economy -- or we need to allow for more HB-1 visas, loosening immigration to let in more professionals from other countries.

Resident scholar at the American Enterprise Institute, and author of "Dow 36,000"

There's no reason to panic. Investors should keep holding, keep buying. People need to learn that making money in the stock market is hard work. You have to keep holding when everyone else is panicking. That's how it works.

It's all short-term bad news. The Microsoft case has inspired fear, as people begin to worry that government is going to get involved; Greenspan has implied his desire to see the market drop; and there are all the experts out there trying to scare people out of the market. I think Greenspan has been wrong about the market for four or five years, and now he wants to be proved right.

Ultimately it boils down to whether companies are making money and historically American firms steadily increase their profits. Even in the midst of more difficult times, with racial strife and war, they've profited. So I don't think there's anything to justify what we're seeing today. Five years from now will we remember today? We might talk a little bit about it, but investors will largely forget -- and move on.