Trieste, Italy's monument to religious freedom, mixes the old with the even older. 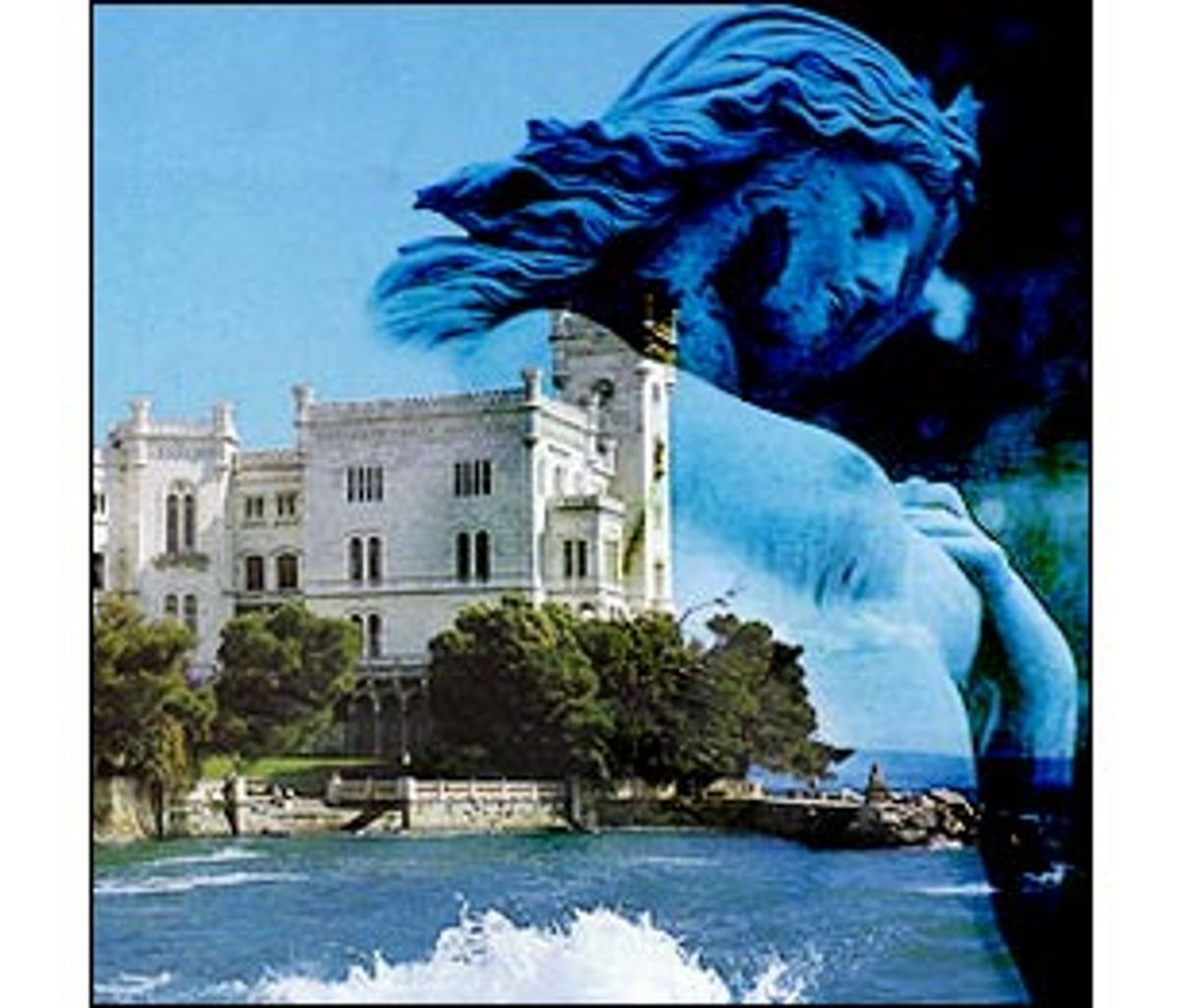 Trieste sits on the shore of the Adriatic Sea in the northeast corner of Italy. It's an Italian city that speaks Italian and eats pasta, but it was part of the Austrian Empire for hundreds of years, so it also speaks German and eats sauerkraut.

The city is a monument to the freedom of religion and a center for music from Puccini to pop. It has a 2,000-year-old history of great, varied theater. It's home to one of the most romantic castles in Italy and the largest domed grotto in the world. The city's Italian heritage makes it romantic, but its Austrian heritage makes you show up on time for your kiss.

For the past several millenniums the sea has controlled Trieste's destiny. Trieste's position as the most northern port on the Adriatic Sea made it one of the most important trading centers in Europe. Sugar and spice came up from the Mediterranean and went on to central Europe; the goods from central Europe came down and went out to the ports of the Mediterranean and Africa.

The first people to settle here arrived about 4,000 years ago and built a walled town on the top of what is now called San Giusto Hill. About 50 years before the birth of Christ, the Romans took over the spot and built a temple. When Christianity replaced the paganism of the Romans, the Cathedral of San Giusto was built on top of the Roman temple. Some parts were actually built out of the temple: The doorjambs of the main entrance are cleverly recycled Roman sculptures, and throughout the structure you can see Roman columns and supports that the cathedral builders reused.

The present cathedral was constructed during the 1300s, when two churches that stood next to each other were combined. The facing side walls came down, and the buildings were connected by a new central aisle covered by a ceiling that looks like the keel of a ship -- and was probably made by carpenters who normally worked as shipbuilders. There are two beautiful Byzantine-style mosaics from the 12th century that are not easy to see, until you place a coin in a box that turns on the spotlights. Interesting symbolism: Contribute to the church and become enlightened.

For 300 years, starting in the 13th century, Trieste was in constant competition with Venice. Trieste had the better port, but Venice had the better army. For protection from the Venetians, Trieste placed itself under the auspices of the kings of Austria. In 1719, one of those kings, Charles VI, declared Trieste a free port and Trieste began to take off as an international commercial center. When Charles' daughter, Maria Theresa, took the throne, she not only kept Trieste a free port but, to attract merchants from all over the world, guaranteed them social equality and religious freedom.

As soon as there were 100 families sharing the same religion, they were allowed to build their own house of worship. Today Trieste is filled with magnificent buildings representing dozens of faiths.

The Church of San Spiridione was built in the Byzantine style by the Serbian community. As with all Christian Orthodox churches, the interior is dominated by icons. The structure known as the iconostasis divides the space available to human beings from the space devoted to the divine. Majestic doors allow priests to move between the two worlds, and silver- and gold-covered icons depict life on the other side.

The Church of Saint Antonio Nuovo, the largest Roman Catholic church in Trieste, was built in the neoclassic style, which looks back to the temple architecture of ancient Greece.

The Evangelical church was built for the Lutheran community in the Gothic style, complete with sharp spires and arched windows designed to remind worshipers of their northern European history.

Trieste is also the home of the second largest synagogue in Europe. Its look is characteristic of the architecture of Syria, the original home of many members of this community. The Jewish population first established itself in Trieste during the 12th century.

These houses of worship stand as testimony to Maria Theresa's commitment to religious freedom. She knew that freedom of worship was essential for a society whose economic base was international trade.

Besides introducing religious freedom, Maria Theresa also directed the city's architectural renaissance. The area now called the Theresian Quarter is an elegant example of 18th century city planning. The streets sit at right angles, rectangular squares open up the space and canals -- the Grand Canal is an excellent example of the form -- cut into the heart of the quarter (making it easier for merchant ships to unload their goods directly into the import houses). By the end of the 1800s, the city was so wealthy and so deeply involved in international trade that it was largely Trieste's labor force and money that built the Suez Canal.

A few blocks south of the Theresian Quarter is the Piazza Unita D'Italia. Once part of an ancient Roman harbor, over the centuries it silted up and eventually became one of the largest and most impressive plazas in Europe. At the top of the square the City Hall looks out to the sea. On the north side is one of the city's oldest cafes; on the south side is Trieste's most historic hotel, the Grand Hotel Duchi D'Aosta, which was designed to give guests the feeling of staying in the home of a well-to-do family.

The original hotel on this site was built in the 1300s to offer a hospitable resting place for merchants arriving on trading vessels, and there's been a hotel here ever since. In 1805 the cafe on the ground floor became the first gastronomic establishment in Trieste to stay open 24 hours a day. Today the area is known as Harry's Grill, its bar having been designed by the same architect who put up Harry's Bar in Venice. The Winter Garden that faces out on the plaza is heated in the winter months, but opens up to the piazza during the spring and summer.

The Hotel Duchi is presently owned and run by the Benvenuti family. Its insistence on modern technology beneath the classical surface is very much the influence of the Austrian tradition: high touch and high-tech.

The food in Trieste, like everything else in the city, is a blend of Italian and Austro-Hungarian influences. The most traditional type of eatery is called a "buffet." Buffet Da Pepi is a good example. At first it looks like all the neighborhood restaurants of Italy, but here they offer ham baked in a bread crust, hot sausages and sauerkraut -- clearly the influence of Austria.

The next step up is called a birrerla, which translates as "a place to drink beer," though most of them also serve the traditional foods of Trieste. I thoroughly enjoyed the Birrerla Forst, which served good goulash with bread dumplings, sauerkraut, frankfurters, Sacher torte and apple strudel. Not quite the menu you would expect in a restaurant serving the traditional foods of an Italian city.

For views to dine by, the restaurant at the Hotel Riviera, Maximilian's, is a good spot. About a 10-minute drive out of town, it hangs over the only private beach on the coast and offers not only great views but also some excellent Triestini food.

I started with ham that had been baked in a crust of bread, a mild local cheese and frico, a pancake made from cheese, onions and potatoes. The next course was jute, a soup that marries the gastronomic traditions of Austria and Italy. The base is made with beans in the style of Tuscany, but the second major ingredient is sauerkraut. Other second courses were pasta with scampi and rice with shrimp, reflecting Trieste's role as a major seaport. The meat course was a dish called stinko, an unfortunate name for an excellent dish of roasted shinbone of pork with pan-roasted potatoes. Cheesecake and espresso made up dessert.

The citizens of Trieste have a greater dedication to music and theater than in any other Italian city. The opera house, Teatro Comunale Giuseppe Verdi -- named for a Trieste resident who contributed two operas -- dates from the Middle Ages, but its technology is up-to-date. The counter of the ticket office contains a computer screen that shows you the seating plan and which seats are available. And the entire system is online, so you can purchase your ticket from just about anywhere.

The most popular theater in Trieste is the Rossetti, which has been used for opera, variety shows, the circus, boxing and wrestling matches and political rallies (which are sometimes difficult to tell from the wrestling). The Rossetti also screened the first motion picture in Trieste. Stefano Curti, director of communications for the theater, told me that over one third of the audience is younger than 26. "We always think that the theater is in crisis, but we have over 3,000 students coming in every week. We are also the home of one of the most important puppet companies, Piccoli di Podrecca, which has a course for people who want to learn the art, from puppet construction to performance technique."

Before cultural forces gave Trieste its social form, of course, there were geographic elements that gave it its physical form. The Grotta Gigante, listed in the Guinness Book of World Records as the largest cave available to tourists, was inhabited during prehistoric times. With its massive domed vault, it could easily accommodate St. Peter's Basilica. Two white plastic tubes in the center of the grotto are part of a scientific experiment measuring the tides of the Earth. (It appears that it is not only the sea that rises and falls with the movement of the moon; that the Earth also expands and contracts with the lunar pull is being studied here.)

The castle at Miramare is situated on a picturesque point that stretches out into the Adriatic Sea and is surrounded by acres of beautifully landscaped gardens. Designed to look like a Norman castle of the late Renaissance period, it was built in the mid-1800s for Maximilian of Hapsburg, the archduke of Austria, who was married to Princess Charlotte, the daughter of King Leopold of Belgium. They were the leading aristocratic lovebirds of the time, if only for a brief period. In 1864 Maximilian left Trieste to become emperor of Mexico; three years later he was executed by Benito Pablo Juarez and poor Charlotte went insane. A story of tragic love worthy of a Verdi opera -- but with an Austrian cast.

For additional information about Trieste or other locations in Italy, contact: Azienda di Promozione Turistica di Trieste, tel: (011) 39 040 679 611. More information can be found at the Trieste Chamber of Commerce and the Italian Government Tourist Board, tel: (312) 644-0996.