Tensions escalate in Dupont Circle and cops put on riot gear. But savvy protesters wonder where the badges are. 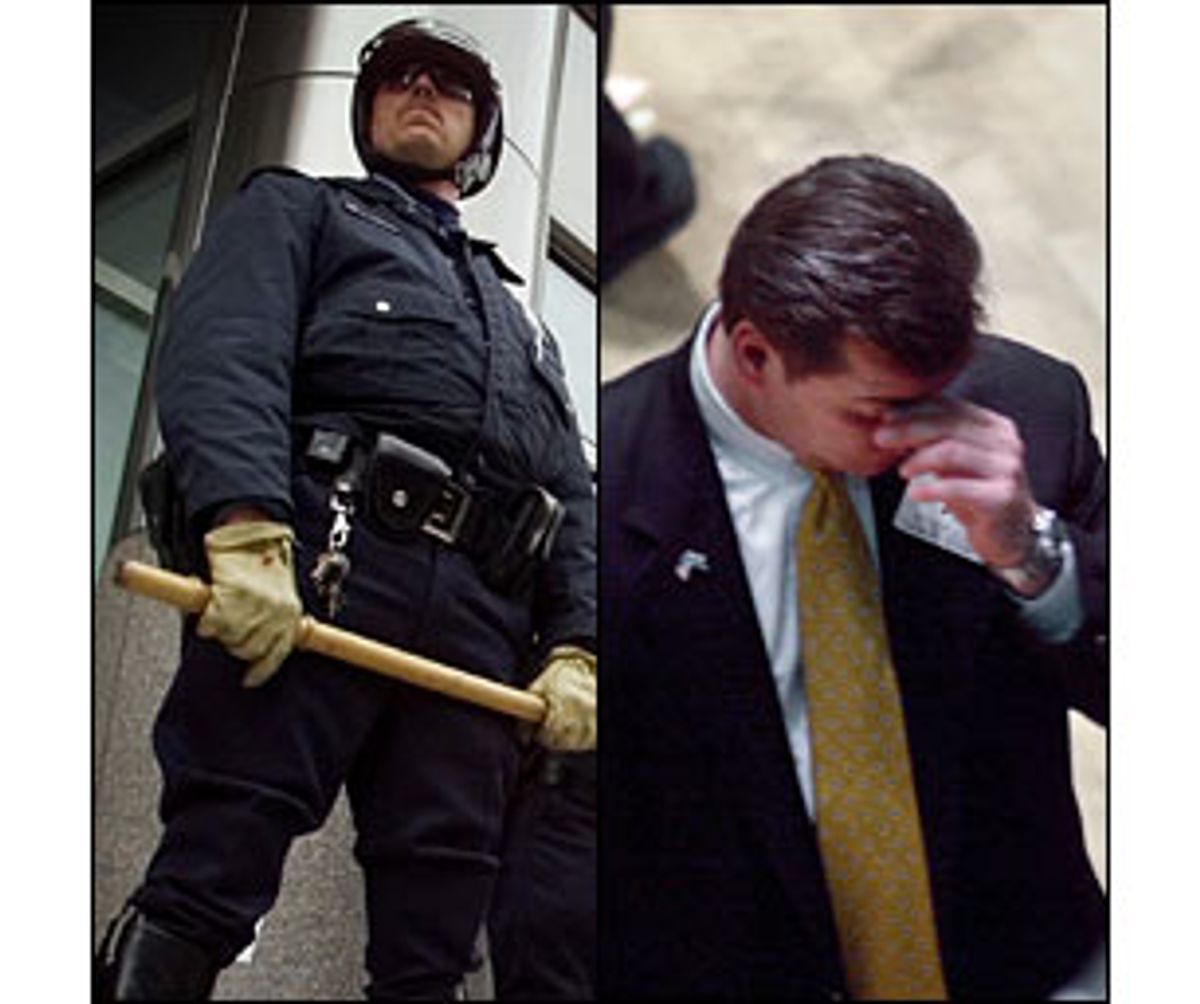 Tensions continue to percolate between the Washington police and throngs of scrappy protestors. The two groups faced off late Friday afternoon in Dupont Circle in a confrontation that could have turned ugly -- but didn't.

Still, the incident, which snarled rush-hour traffic to a stop, gave witnesses a good look at a police squad in full riot gear, primed to react swiftly on the eve of a series of protests against the International Monetary Fund and the World Bank expected to last through Monday.

But protesters -- many freshly schooled in recent days on the specifics of legal protest and civil disobedience -- were worried less about what the police were wearing than what they weren't. Many pointed out that, in a direct violation of police protocol, if not law, a vast majority of the badges of the men and women in blue were hidden from view.

For police officers to have their shields in plain view at all times is "standard operating procedure," said Officer Anthony O'Leary, a Metropolitan Police Department spokesman. O'Leary cited the General Order guidelines for police, which state: "While on duty, members shall carry their badge and identification folder at all times" unless undercover. O'Leary added that he had always interpreted "carry" to mean "wear in plain sight."

Of the two dozen policemen clad in riot gear and standing on the periphery of Dupont Circle, the badges of only four were visible. "If you're in uniform, you're supposed to have your badge showing," O'Leary said. After having the Dupont Circle scene described to him, O'Leary said, "Why they didn't have their badges visible, I don't know. I wasn't there."

The events that led up to the near-ugliness, in which one protester was arrested, began with the trappings, at least, of innocence. Dozens of protesters made the mile trek from the Convergence Center on Florida Avenue to the park at Dupont Circle, in one of D.C.'s funkier, still predominantly white neighborhoods. A scripted performance followed, featuring costumed protesters and immense papier mbchi puppets -- three of which depicted the heads of the World Bank, the IMF and the World Trade Organization -- dramatically acting out the protesters' critical view of the effects of the institutions on third-world countries.

Disrupting the puppet show with a megaphone and a heaping supply of choice words for the protesters was an older, bearded heckler. The man, who is missing several teeth, refused to divulge his name, though he described himself as a disenchanted former member of the Mobilization for Global Justice, the organization putting together this week's anti-IMF and anti-World Bank activities.

"The guy has been a real crazy nut," said Alli Starr, 32, a protester who works for the Global Exchange. "I think he's got a mental disorder."

Soon, according to several witnesses, two young male protesters approached the heckler and an argument ensued. According to the heckler, one of the two young men, wearing a black bandana that covered his face, "grabbed my microphone and tried to intimidate me and threaten me, so I took a swing at him."

Every witness interviewed -- and the heckler, too -- agreed that the only punch thrown and the only one landed was by the heckler into the bandana-wearing protester's face. Several witnesses describe the protester as having thrown up his hands as if to indicate that he was having no part of the violence. Nonetheless, even though he was the recipient of the assault, the protester was the one targeted for arrest.

"The cops ran up and dragged [the protester] away," said James Osbourne, 23, who came from St. Louis for the weekend protests. "They saw what happened, too. There was no confusion."

Suddenly a phalanx of police officers -- some from the D.C. force, others from the National Park Service, still more borrowed from any of the dozens of local law enforcement agencies -- were standing in an impenetrable line, keeping the protesters from the assault victim they'd dragged away in handcuffs. D.C. Police spokesman O'Leary points out that wearing a mask could be considering trying to conceal one's identity, which can be considered a crime.

Within minutes of the chaos caused by the arrest, which many protesters were quick to label "unjust," a horde of cyclists began blocking traffic around the circle, already crowded because of rush hour, not to mention the dozen police cars parked and blocking at least one of the four lanes around the circle.

"We had been riding around the circle," described Amanda Hickman, 24, who came for the protests from New York. Every time they passed the nearby Mexican Embassy, they would cheer so as to show support for the Zapatistas, she said. Then one time they circled around and "suddenly there were 60 cops." So some members of the cyclists stood in the street, holding their bikes above their heads and yawping.

Within minutes, 15 cops on motorcycles slowly rode into the crowd of bikes, pushing them back onto the sidewalk.

Immediately protesters swarmed to the edge of the sidewalk; cops in riot gear holding billy clubs stood in the street.

"By law your badge numbers must be visible!" one man shouted. "You are not wearing your badges for a reason," the protester continued, pointing out that city law requires badge numbers be visible so residents can identify them in case police use excessive force. "We are aware of this. I see you and you see me and I'm a human being! I have a 5-year-old son, I'm a loving father, and a human being!"

To the side, Francesca Zamora, 31, from Southern California, said that "the cops calling the shots are not men of color," noting that the police on the front lines were predominantly black. Still, it was pointed out to Zamora that D.C. Police Chief Charles Ramsey is black. "I mean the ones here," she said. "I'm a woman of color, and I notice that the men of color are doing all the dirty work."

That said, it was worth noting that the more glaring racial breakdown was this: cops, black; protestors, white.

"Whose streets? Our streets!" the protesters chanted.

A swarm of policemen on bicycles suddenly passed by and took a left, north onto Connecticut Avenue.

Other protesters, armed with video cameras, peppered individual police officers for their names. They didn't respond.

"By taking off your badge numbers you're not being open and honest to us as citizens, which is your job," said Jonah Zern, 22, of Berkeley, Calif.

Across the street from Zern, a small crew of bystanders and protesters stood with the bearded heckler.

"I was kicked out of A16 in March after joining in January because I object to the group's tactics," he said. "I'm against what they're doing -- building-access denial, threatening property destruction, police intimidation. They're consumed with the tactics; they know nothing about the issues."

The heckler -- short on teeth but long on wind -- went on to argue that the protesters were violating the rights of those who want to use the streets without having their rush hour disrupted by activists. "They came here from out of town and they're going to start a riot like in Seattle, and I live here, so I'm going to be left holding the bag."