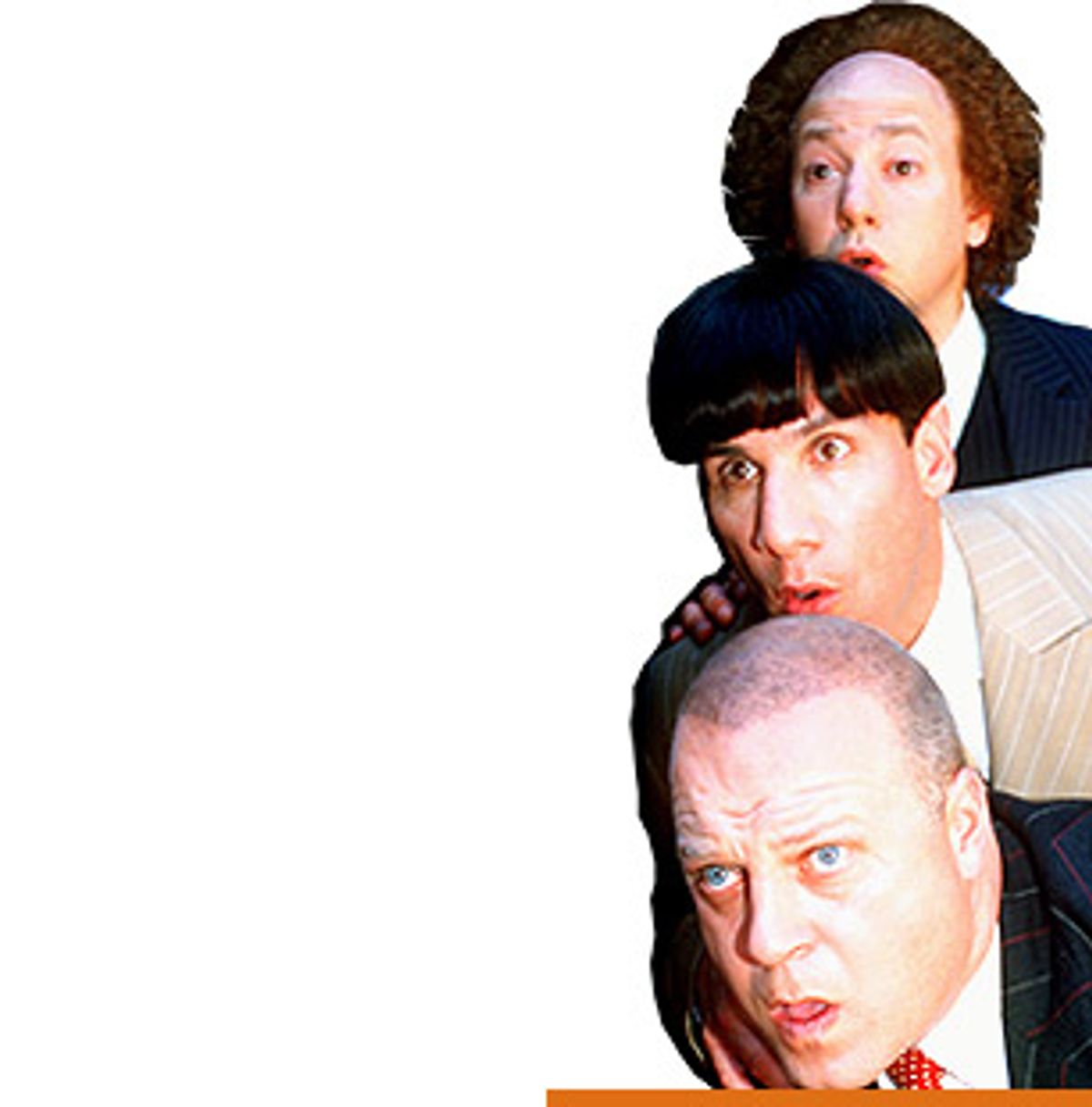 It isn't easy being a Three Stooges fan. The slap-happy trio never had the respectability of Abbott and Costello, Laurel and Hardy or the Marx Brothers (classical harp solos -- gimme a break). Let it slip to the wrong people that you're a Stoogeaholic and you can see the discomfort on their faces, as if you've just dumped itching powder down their back or offered them a slab of Limburger cheese. Aren't the Stooges just lowbrow, low-class, eye-poking, pie-throwing idiots? Soi-tanly! But that's the whole point.

Look, if you're not a fan, I could try to show you the elegant mathematical logic to the Stooges' stupidity (A will always lead to B, no matter how many times the gag is repeated), try to convince you that setting up an honest, stupid sight gag is as delicate an operation as defusing a bomb, demonstrate that without the Stooges, we wouldn't have "There's Something About Mary" or "Dumb and Dumber" or Jerry, George and Kramer's Moe, Larry and Curly dynamic on "Seinfeld." But the truth is, you either get the Stooges or you don't. Just don't let me catch you dissing my boys within 50 feet of a pie shop, or you'll be washing custard out of your eyebrows for weeks.

I have been a Stooges fan my whole life. One of my earliest TV memories (I think I was about 4 or 5) is watching the Stooges early on weekend mornings with my father, who would translate the scraps of Yiddish they'd toss into the dialogue. Vaudeville veterans, the Stooges were princes of anarchic, aggressive slapstick. In the nearly 200 short films they made for Columbia Pictures from the 1930s to the '50s, Moe, Larry and Curly (and, after Curly was forced into retirement by a series of strokes, Shemp) played the same sort of characters over and over -- uneducated and uncouth yet good-hearted buffoons who blundered into jobs or social situations that were way above their heads.

In real life, Moe Howard (Moses Horwitz), his brothers Curly (Jerome Horwitz) and Shemp (Samuel Horwitz), and their friend Larry Fine (Louis Feinberg) were the sons of Eastern European Jewish immigrants, and the Stooge sensibility (if I may be so bold) is all urban, first-generation go-getter laced with an old-country distrust of authority.

The Stooges' shorts went into TV syndication in 1959, and were still hot when I was in high school in the '70s. Of course, some teachers and parents fretted about the Stooges' eye-pokes, face slaps and nose tweaks (all of which were hilariously heightened on film by extraordinary sound effects), as well as their copious use of the words "moron" and "imbecile." But that only made the Stooges more godlike to me and my blue-collar, suburban-Boston classmates. In high school, we used to terrorize substitute teachers with spontaneous whole-class outbursts of the Stooges' Pig Latin classic "Swingin' the Alphabet" ("B-A-BAY, B-E-BEE ..."). On the day Larry Fine died in 1975, we had a moment of silence before the teacher came into the room for English class. And this was advanced placement English.

My husband is a Stooges fan, all his siblings are Stooges fans and, now, thanks to the video store and cable, my son is a Stooges fan. And so, it turns out, is Mel Gibson (yes, that Mel Gibson), who is the executive producer of the TV movie "The Three Stooges," which airs April 24 on ABC. And Stooges fans should be eternally grateful to Gibson, because without a name like his attached, would ABC (home of Jennifer Love Hewitt's "Audrey Hepburn") have given up two precious hours of prime time to a bunch of half-forgotten knuckleheads with no sex appeal? It must have been a sad day indeed at ABC when the suits realized just what they'd signed on for -- and that Mel would not be playing Curly.

Thankfully, though, Gibson, director James Frawley and writers Janet Roach and Kirk Ellis haven't tried to sex up the Stooges' story. Based on Michael Fleming's Stooges biography "From Amalgamated Morons to American Icons," "The Three Stooges" is a gentle, even whimsical affair, with a persistent undertone of tragedy. The Three Stooges were one of the most exploited acts in all of showbiz. Their boss on the vaudeville circuit, Ted Healy (played in the movie as a mean-eyed lush by Marton Csokas), underpaid them, but Moe (who handled the group's financial affairs) was reluctant to rock the boat by asking for a raise. And if Moe wasn't willing to challenge a punk like Healy, he certainly wasn't going up against the powerful, short-fused Columbia Pictures boss Harry Cohn, who wooed them away from Healy with a Hollywood contract. As a result, in their entire career at Columbia, the Stooges never made more than $8,000 a movie.

At the beginning of "The Three Stooges," it's 1959 and Moe (Paul Ben-Victor) is a forgotten legend working as an errand boy on the Columbia lot; ever the optimist, he thinks of his humiliating labor as doing "mitzvahs" for friends. While on the lot one day, Moe hears that the studio has sold the Stooges' shorts to TV for $12 million, but the Stooges' old contract doesn't entitle them to a piece of the action. In an uncharacteristically bold move (he was only a tough guy on the screen), Moe puts together a new Stooges act with Larry and Joe "Curly Joe" DeRita (Curly and Shemp were both dead by then) and prepares to cash in on the Stooges' TV-sparked resurgence. But, first, the obligatory flashbacks ...

"The Three Stooges" offers note-for-note re-creations (in black-and-white) of scenes from classic shorts like the Oscar-nominated "Men in Black" ("Calling Dr. Howard, Dr. Fine, Dr. Howard ..."), "Uncivil Warriors," "Ants in the Pantry" and "You Nazty Spy" (the first of the trio's many anti-Hitler satires). Michael Chiklis ("Daddio," "The Commish"), who plays Curly, displays an eerie capacity for mimicry. Chiklis has Curly's high, sing-song voice, graceful, almost mincing walk and peerless timing down cold. But Chiklis also manages to etch a real performance; he's immensely moving as he conveys the childlike, trusting nature that made Curly an easy mark, and the insecurity that, in his mind, kept him in the shadow of older brothers Moe and Shemp (played in the movie by John Kassir).

When Chiklis exits "The Three Stooges" after Curly's stroke, he takes the movie's vitality with him. Evan Handler (he was Shrug in "It's like, you know ...") makes a wonderfully spacey, slightly perverse Larry, but Ben-Victor, who has to carry the movie, never quite nails Moe; he can't get the bulldog scowl right and his readings and inflections are jarringly off in the re-creations. "The Three Stooges" putters through the Shemp years and the '60s comeback without ever recovering the energy level of its Chiklis scenes. But the movie does offer an appropriate post-mortem to the mercifully brief, post-Shemp, Joe Besser Era: "It's no fun anymore," laments Handler's Larry. "Besser's no Stooge, and the pictures pretty much stink."

Still, Gibson's loving, serious take on the Stooges is one of the nicest tributes Moe, Larry and Curly (and Shemp) have ever received. Granted, the Stooges haven't received many, even if you factor in last year's Three Stooges vs. Three Tenors bout on "Celebrity Deathmatch" and the Stooges postage stamps issued by the government of Mongolia. But one place the Stooge spirit lives on, defiantly, is in the popular grade-school book series "The Adventures of Captain Underpants," by Dav Pilkey.

The "Captain Underpants" stories feature a pair of fourth-grade pranksters named George and Harold, who attend "Jerome Horwitz Elementary School"; they're an awesomely Stoogesesque outpouring of dumb sight gags and authority-defying mayhem. Each volume includes a flip-book section called "The Incredibly Graphic Violence Chapter" where the reader can flip the pages and create a crude cartoon of George and Harold whacking bad guys over the head with 2-by-4s, or George and Harold's comic-strip superhero Captain Underpants flushing some evildoer down a toilet.

Naturally, there are some parents who ban the "Captain Underpants" books as assiduously as some of my friends' parents used to ban the Stooges. And, in each book, Pilkey sends up those parents with mock warning labels that are the equivalent of a pie in the face: "The following chapter contains scenes that are so intense and horrific, they may not be suitable for viewing by people who can't take a joke. If you are easily offended, or you tend to blame all of society's evils on TV shows and cartoon characters, please run to your nearest supermarket and get a life." Nyuk, nyuk, nyuk.