Can a passenger be thrown off a plane for offensive body odor? 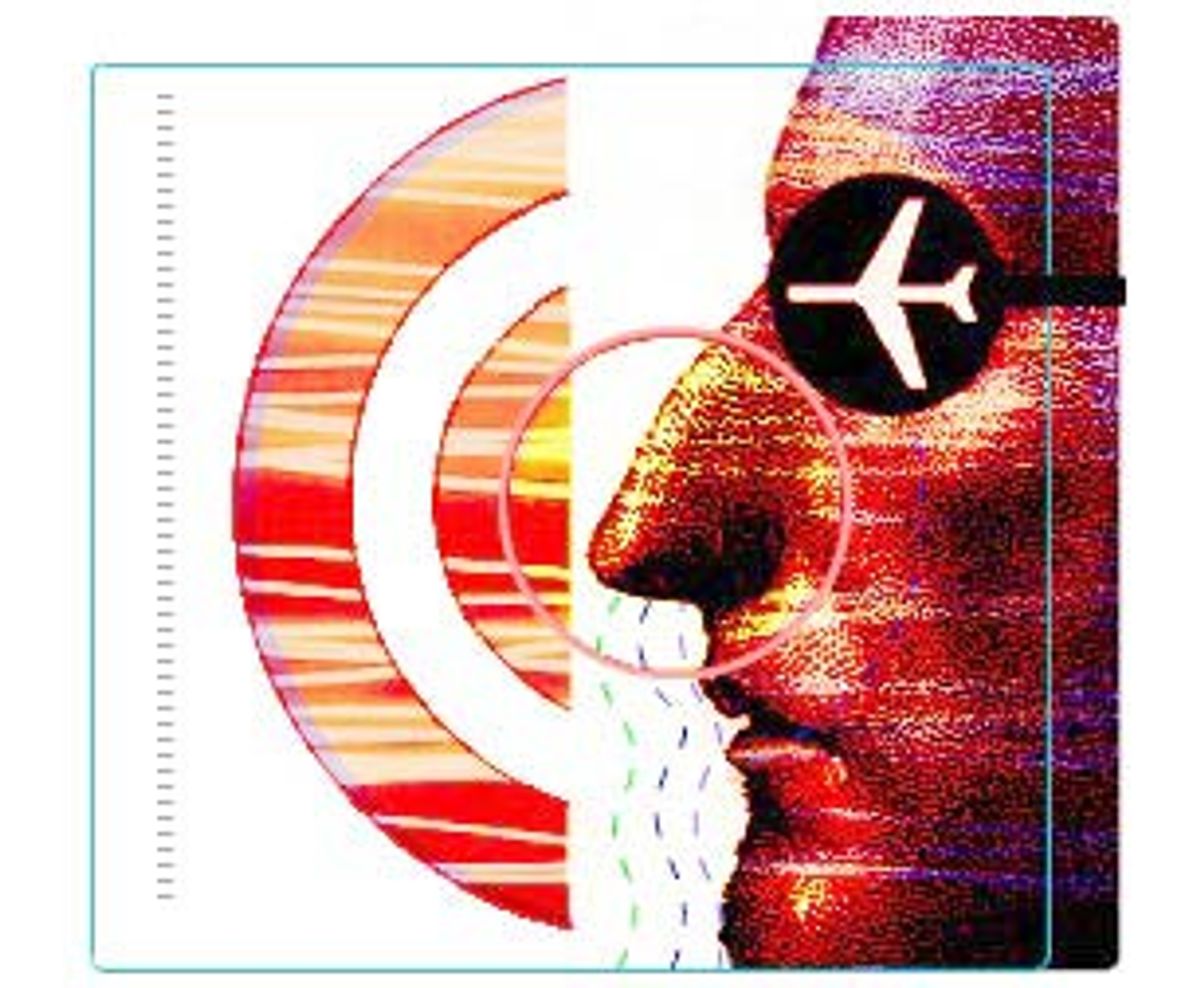 Speed and altitude notwithstanding, flying in a commercial airplane is not much different from riding in a Greyhound bus. You pay a higher-than-expected round-trip fare, inch down a narrow aisle, toss your carry-on into the overhead, squeeze into a tiny seat next to a stranger whose ass seems as wide and unruly as the Australian Outback and then try to read, sleep or stare out the window until you pull into the terminal in Boise or Chattanooga. Despite advertising campaigns that allude to a level of comfort and attention one might expect in a stateroom aboard the Queen Elizabeth II, air travel, in its purest main-cabin form, is little more than public transportation. Greyhound at 30,000 feet. Amtrak with wings.

As with most forms of public transportation, your travel experience is affected as much by the staff as by the passengers sitting next to you. At times, your seatmates can have an even greater impact. We've all sat next to someone who talked until our eardrums bled, who laughed obnoxiously while watching the in-flight movie, who yammered endlessly on the in-flight telephone. We've endured the frequent-flying moron who sucks his teeth, clips his dirty toenails (there's nothing worse than being hit by toenail shrapnel), picks his nose unmercifully or falls asleep and either drools from the corner of his mouth or snores with the vigor of a drunken wildebeest.

The more unfortunate among us have suffered even worse. On one crowded flight or another, I've been victimized by soundless flatulence, the stealthy, gaseous, repeated break of wind from an overweight businessman who should never have eaten that burrito. An SBD (Silent But Deadly) can be a pungent emission, but it's far more civilized than the eye-opening trumpet blast from less-conscientious cheeks.

Flatulence, be it an SBD or a blaring tribute to Herb Alpert, is as short-lived as the crossing of a garbage truck at a busy intersection. You can wait for the pungency to pass. You can breathe through your mouth for a little while. Or you can live in denial, like many passengers, and pretend you can't smell a thing. But if your seatmate is suffering from debilitating body odor, if the stench of dirty dish rags and rotten eggs seeps from his arm pits like a noxious gas, then you might find yourself praying for a depressurization just so the oxygen masks will drop.

Not long ago, just as our Boeing 767 was ready to depart JFK for Paris, a couple of angry passengers confronted members of my crew. "We refuse to fly under these conditions," said a man who approached with his wife. Like a growing number of middle-aged American travelers, they were dressed in brightly colored sweat suits, brand new Nike athletic shoes and fanny packs that hung from their waists like a decorative sash. I wasn't sure if they were preparing to fly on a trans-Atlantic flight or run the New York Marathon.

The purser turned to address them. "What conditions?" she asked.

"It's that group of rowdy Frenchmen," he replied. "They ... they ..." the man couldn't seem to find the right words so his wife interjected. "They stink!" she said, with a sneer.

The purser and I exchanged a glance and went back to investigate. Sure enough, as soon as we approached the middle of the main cabin, we stopped dead in our tracks and gagged. The funk was alive. It came at us like a mugger in broad daylight. Bold. Brutal. Uncompromising. The stench of old gym shoes and exotic cheese. The reek of bottled sweat.

The purser's face became a rictus of horror. Looking at her, one would think she had just walked into her bedroom to find her husband in bed with another woman, or perhaps another man. Had she been a new flight attendant on probation, a look like that could have easily gotten her fired. "Inappropriate facial expression," that's what the company calls it. (I know one probationary flight attendant who lost her job because she rolled her eyes after a passenger made a sexist remark.)

Inappropriate looks and all, the crew huddled in the first-class galley, trying to figure out what to do. Like reluctant bloodhounds, the purser and I had traced the stench to a cluster of 25 or 30 Frenchmen. They were laborers, grim-faced and rough-handed, dressed in worn jeans and work boots as if they'd just finished a six-week stint on an oil rig.

We soon discovered that the two passengers in sweat suits weren't the only ones who were offended. During my very brief stay in the coach cabin, I saw a sea of tortured faces. Several people blinked at me as if sending a Morse Code plea for help. An elderly woman fanned her frowning face with an in-flight magazine. A man coughed repeatedly into his fist and threw a dirty look my way. Others cursed beneath their breath. A few passengers turned their heads or pinched their nostrils -- one guy even draped his head with a blanket (I swear) -- they tried anything to escape the inescapable aroma of 30 hard-working men who smelled as if they hadn't bathed in a week.

In our flight attendant manual -- the Bible of rules, regulations and step-by-step procedures that governs every activity from passenger boarding to emergency evacuations -- there is a section dedicated to "Passenger Acceptance." Here, the airline provides a list of people who are forbidden on an aircraft: barefoot passengers; infants less than a week old (unless their parents have a physician's note giving approval to fly); intoxicated passengers; those with communicable diseases; those who are clothed in such a way as to offend other passengers; violent, obnoxious and rowdy passengers; anyone carrying a deadly weapon -- concealed or otherwise. The list goes on and on.

About halfway down the no-go list, somewhere between handcuffed criminals who refuse to cooperate with their escort and people who appear to be under the influence of drugs, there's an entry that came in handy on the JFK-Paris flight. It says that the airline reserves the right to refuse passage to anyone who has offensive body odor. If the smell is the result of a physical handicap or disability, the passenger is allowed onboard and his fellow voyagers will simply have to grin and bear it. But if someone stinks because of ineffective or nonexistent personal hygiene, if that someone needs a quadruple swipe of Right Guard or a furious dusting with Dr. Scholl's foot disinfectant, the airline has the right to dis him or her on the spot -- regardless of that person's religious or cultural beliefs.

Luckily, I do not speak French. Once the crew came up with a strategy, one of several French-speaking flight attendants was dispatched to the main cabin. In a very low voice, she told a couple of guys in the group that passengers were complaining about their odor. The men were offended, of course. They threw their hands in the air and mumbled in French about the inherent stupidity of Americans (the French-speaking flight attendant made us aware of this later). But when they were told the plane would not leave until the smell had been assuaged, they rose from their seats and walked to the jet bridge where a quick-thinking gate agent had amassed about 30 bars of soap. When the men returned from an airport bathroom, the plane took off. We were about 15 minutes late, but all the more fragrant because of it.

It's not always so easy to get putrid passengers to freshen up, however. Once, during boarding of a flight from Caracas to Miami, I caught the foul stench of an unrepentant couple whose collective funk could have fueled the warhead in a stink bomb.

While loading oven racks in the galley of a 757, I looked up from a cluster of half-frozen chicken dinners and noticed two passengers moving toward me down the aisle. They were the first to board. The fact that no passengers followed them was not unusual. Perhaps they were pre-boards, I thought. Perhaps age or physical disability made it necessary for them to board ahead of everyone else. But they were in their early 30s and showed no apparent signs of physical disability. The reason no one followed, I soon discovered, was that both of them stank to high heaven.

The smell hit me as they approached the rear of the empty cabin. I staggered backward as if I'd been shot. Seconds earlier, I noticed a slight shift in air quality, as if the door to the Detroit Lions locker room had opened just a crack. I stood at the back of the aircraft and took a tentative sniff. It was as if I were a farm boy inhaling a big-city line of cocaine. A frogman sampling the stench before splashing into the sewers. My nostrils were on fire and my olfactory gland was ready to burst.

By the time I came out of the lavatory the couple had settled into seats 30-A and B, and several pissed-off passengers were waiting for me in the galley. I was bombarded with statements like "You better do something right now, godammit" or "I'm not sitting next to these filthy pigs." But the most telling comment came from a man who spoke in a slow Southern accent. "Smells like sumthin' crawled up their asses and died."

I called on the interphone to confer with the purser. She told me to tell the couple to come to the front of the aircraft. I argued, insisting that dirty work like this falls under the domain of purser duty. "That's why you guys get paid more," I said. "That's why you get special training." But the purser was busy with another problem in first class. Besides, the galley was filling with angry passengers. If I stalled any longer we might have a riot on our hands.

With all the composure I could muster, I approached the offending couple. I held my breath, speaking from a constricted diaphragm that suddenly made me feel dizzy. "Excuse me folks," I said. "But ahhh ... the purser ... she ahhh ... she needs to speak with you in the front of the aircraft."

Aside from the caustic odor, they seemed like pleasant people. They were dressed in clean casual clothes and smiled as I spoke. "What does she want?" the man asked.

I was running out of air. "Well," I said, "to be perfectly blunt, the ahhh ... the passengers are complaining about the way ... about your ... the passengers say your body odor is offensive." Like a swimmer who'd been under a couple of seconds too long, I took a huge gulp of air and immediately wished I hadn't. The couple exchanged a look and threw at me a gaze that could have melted steel.

"We are not moving!" the man said defiantly.

After a visit from the gate agent and the captain, after we threatened to call airport security, after patience was ready to give way to a passenger revolt, the couple finally grabbed their bags and walked to the front of the aircraft, leaving a sea of gagging passengers in their wake. But before leaving the airplane, they bestowed upon us a parting comment. The final insult voiced by anyone -- drunks, obnoxious jerks, violent passengers and yes, the indelibly stinky -- who has ever been tossed off an aircraft: "We're never flying this airline again!"