What does a woman want? Season tickets

The San Francisco Giants are ensconced in their new ballpark. Now if they could only throw off the hex and win a game there. 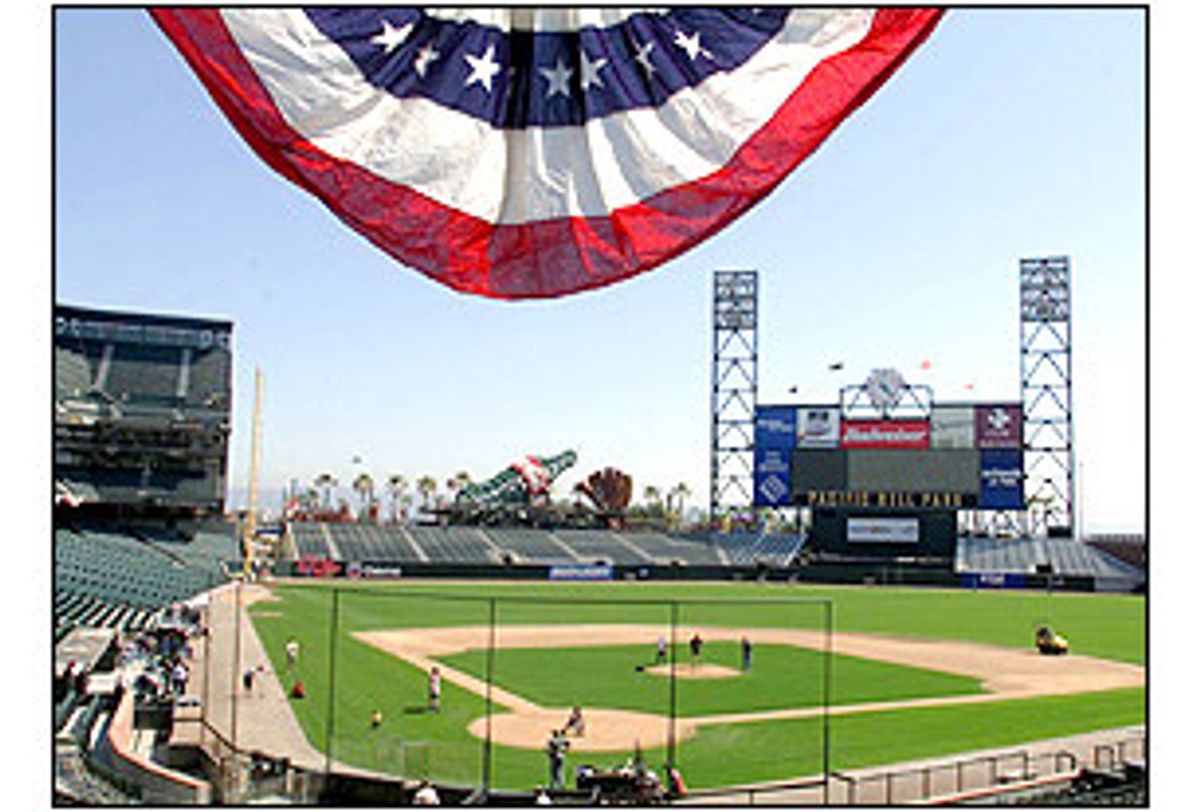 I loved Candlestick Park, the ugly concrete wind farm where the San Francisco Giants used to play. I cried the day they closed it in September. But after the end-of-season ceremony, when the team had a helicopter carry the Stick's home plate over to the new digs downtown at Pacific Bell Park, I accepted the news I'd been resisting for three years: I had to have seats in the new stadium.

Who'd have thought a Major League Baseball franchise -- the guys who brought us the strike of '94 -- would do ritual so well? But the sight of the plate being lowered into the mud at the new park a few miles away, televised on the stadium Jumbotron, made me feel better, like I'd find a new baseball home, just as good or better than the old one. Even after thieves stole the plate from the new park, I didn't care. I had to scrape up thousands of dollars to pay for seat licenses and season tickets, and make my friends do it with me.

Still, it was a reach -- psychologically as well as financially. I don't belong to a country club or any other kind of snooty social in-group. My daughter goes to public school. Buying these seats didn't quite feel like me. For a while I had an investment-banker boyfriend who'd bought charter seats, the expensive ones on the elite club level, the minute they became available. One day during a fight he reached into his briefcase and waved his new charter contracts in front of me, as if to say, Don't you want to be around to get a piece of this? It was more endearing than it sounds now, but I guess the answer was no; we broke up soon afterward.

As 2000 approached, I realized I couldn't rely on a man: I'd have to get my own seats. It hurt. For the seats I wanted -- lower box, not the best but still great -- the charter "seat license" alone was $3,000 a seat, plus another $1,900 for the season tickets -- almost $10,000 for the two-seat package. My best friend and I figured we could each afford a quarter of that, and eventually we found four friends who'd each take an eighth.

But as it came time to finalize our decision, my exhilaration fought with fear and a certain kind of guilt. The San Francisco media has been full of stories about lifelong Giants fans shut out of tickets this year by all the dot-com assholes whose companies have bought season tickets but are probably too busy to go. Hey, that sounds like me.

Plus, the stadium's private financing means the team had to sell off every inch of it to the highest bidder for sponsorships. Pac Bell bought the park's name before the stadium was even born, and as it went up people began complaining about the big Coke bottle in left center field, the Old Navy mascot, the dot-com ads everywhere.

But the uncertain future of my favorite Giant, manager Dusty Baker, was the source of my biggest doubt about investing in the Giants' new park. Baker is the spiritual leader of the gritty, blue-collar, Candlestick Park Giants I loved in the 1990s. For seven years he took a mid-payroll team, no stars save Barry Bonds, and made them fearless baseball warriors, and frequently playoff contenders. He was twice named National League manager of the year.

As 1999 closed it was clear that the Giants' owners weren't doing enough to sign him, though his contract runs out at the end of 2000. It began to worry and annoy me that after all the team's owners had done to build a solid foundation at Pac Bell Park, they were putting the future at risk by failing to lock up Baker.

But that's me. I worry too much. I have problems with commitment. In the end I paid my almost $2,500 to own a piece of the park. Though as the season opener approached I was still afraid that I'd be disappointed, that I wouldn't like the park, or the fans, or worse yet, the team the Giants ultimately assembled to play in the shiny new baseball-boutique by the bay.

As usual, a lot of my worries were for nothing. Pac Bell Park is a glorious cathedral of baseball. A co-worker and I walked to our first game, the opening pre-season bout with the Milwaukee Brewers, about a mile hike from our office downtown. You traverse grimy Third Street, which sneaks under the freeway (where the homeless still live), genuflects at the new ball field and then, fittingly, stretches all the way south to Candlestick Park.

Just as the streets get more crowded, Pac Bell suddenly rises up in front of you. That first game, my friend and I were awestruck, speechless, like pilgrims at the end of a long journey. Twenty-four palm trees wave above Willie Mays Plaza (in honor of his uniform number, 24). Lights around their bases illuminate the trees as they surround the tall bronze statue of Mays out front.

In bronze Mays is not quite 30, and he's just hit a home run. His lithe, powerful body is at the end of a mighty swing; the bat is falling away, still cradled in his last three fingers (Mays worked with the sculptor to get the release right), and he's looking skyward like all great transcendents. There is not another stadium in America with so majestic an entrance.

I have little quibbles. The Giants cut corners, literally, on space, parking the stadium on a tiny plot of land hanging over the bay. That leads to a certain funkiness -- a wild jutting fence in right field, for instance. Plus, the walkways behind the seats are way too narrow. At Coors Field in Denver and Camden Yards in Baltimore, also designed by HOK Associates, the promenades are huge, and the food concessions are placed so that their lines don't interfere with foot traffic. At Pac Bell, the concessions line both sides of the promenade, so the popcorn line snakes out into the walkway till it runs into the hot-dog line on the opposite wall. Voilà! Gridlock.

And yes, the corporate sponsorship was a little over the top. There are ads everywhere. Even the cup holders attached to the seats have Webvan stickers wrapped around them. I tried to scold my young friend and co-worker who, that first night, peeled off two of the stickers and marked our seats with them to write a note to our partners who had tickets for the next night's exhibition against the New York Yankees. It was the park's first act of vandalism! It was one of my favorite moments. But I'm happy to say that when I showed up opening day the stickers were where he left them -- maintenance Nazis hadn't stripped them off. They're my seats, after all.

But, to my surprise, I loved the people in my section. Despite my worries, they're more or less just like me -- avid Giants lovers without trust funds, who split the charter fee with lots of their friends and share the season tickets. The handful of jerks with the nerve to talk loudly on cell phones at the early games were booed as rudely as at Candlestick. It seems the riffraff -- the investment bankers and dot-com jerks (the ones who, unlike me, have made big money) -- are confined to the club section just above mine, where they have their own bars and restaurants, plus a business center where they can work and watch the game.

I'd be remiss if I ignored one other demographic change: Men outnumber women by about a 2-1 ratio, vastly more than at Candlestick. The feminist in me, who is disturbed, fights with the flirt in me, who had a great time. But it also made me proud I'd purchased a piece of the park. I was chatting with a stockbroker who asked if my great seats were "one-day seats," a term I heard several times, meaning they were borrowed or bought but weren't your own season tickets. When I said no, he pressed me: Were they my company's? My boss's? My boyfriend's? His shock and admiration at the news they were mine made me realize a woman needs season tickets of her own.

But Opening Day didn't resolve my biggest worry: How will all the luxury affect my gutsy, blue-collar baseball team? After a week in the new park, the Giants have yet to win a game. They were swept three straight by the loathsome Los Angeles Dodgers, who hadn't swept a series in San Francisco since 1981 -- when Dusty Baker was a Dodgers outfielder. They lost two to the Arizona Diamondbacks, and when the third game was rained out, it felt like a mercy. Unbelievably, in that first week, I saw the first two rainouts of my entire life, plus a visit to the new ballpark by President Clinton, but I have yet to see a win.

It'll be OK, I tell myself. It just doesn't feel like home yet. The fans seem distracted -- hell, I am. We dropped the home opener and I didn't really care; I was grooving on the sun and the people and the incredible view of the bay. When the next night's game was suspended by rain, I wasn't that unhappy either -- I was hanging with my friends in the less-crowded promenade, drinking beer and eating garlic fries, watching folks talk on cell phones while a few Candlestick hooligans jumped the fences and slid on the big white tarps.

It wasn't until I watched the third game on television that I began to obsess. The fans are distracted -- on TV I could see entirely too many cell phones behind home plate, and too many people milling around talking to their friends. Plus, some of those sacred field box seats emptied fairly early in the game. The stands are a little too full of people there for the spectacle, who neither know nor care much about baseball.

The players seem distracted, too, flat and fretful, too small for their new park. And I'm back to worrying about Baker's lack of a contract. Through the Giants-fan grapevine -- friends of friends of friends who know him -- comes word he's unhappy with the Giants' latest offer (no shock since he hasn't signed it), and other teams are known to be after him. Put him on top of the talent-rich but dysfunctional Dodgers -- who've in the past expressed keen interest in their former All-Star -- and they'd own the National League.

Players profess not to be worried about their manager's future. "The Giants owners are smart baseball people," outfielder Ellis Burks told me during spring training. "They'll sign Dusty. They've just been distracted getting the new park open."

Understandable. We've all been distracted. But it's time to get serious. I'm hoping the Giants' slow start will discourage the thrill seekers and hangers-on. The stadium's sold out, but maybe some of the riffraff won't bother showing up when the team comes back to town next weekend. I'm looking forward to a cold and windy Friday night, a Candlestick special. We'll put down our cell phones, stop gawking at the views and just play baseball.