It's virtually plotless, but the new novel by the author of "The Debt to Pleasure" makes the life of a randy, unemployed accountant seem touching. 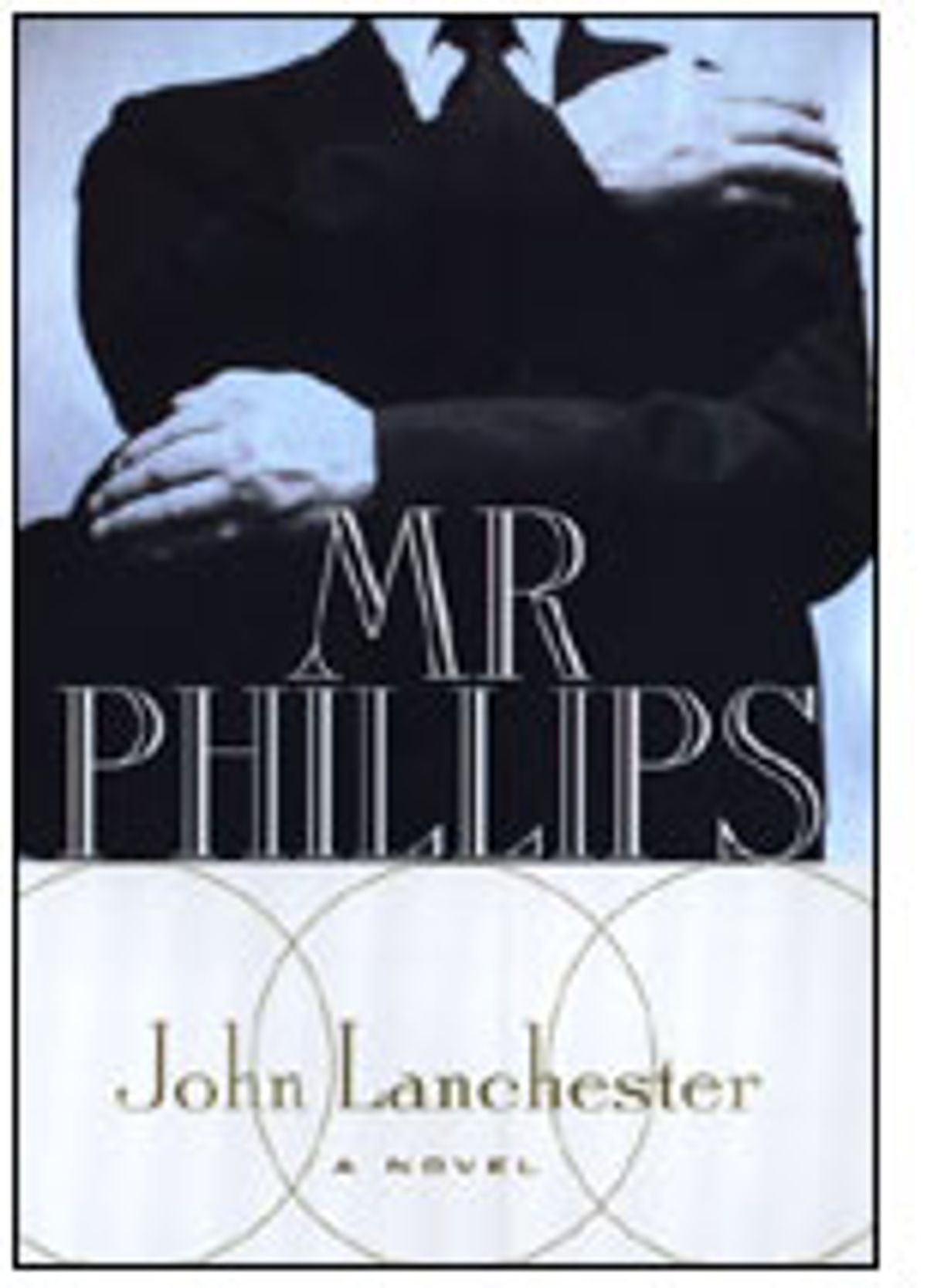 John Lanchester's new novel, "Mr Phillips," is all about an accountant called Mr. Phillips. That telephone directory name tells you a lot about the guy: not exactly a nobody but certainly a few feathers short of being one of life's peacocks. At the very end of the book we get a Christian name, Victor -- just in passing, like a sudden flash of stocking. But for the most part Mr. Phillips stays safely buttoned up behind the honorific: "At night, Mr Phillips lies beside his wife and dreams about other women." It's a neat reverse-zoom effect -- the present tense pulling him close to candor, the surname keeping him from getting in too deep, like someone who likes to keep his socks on during sex.

Such tidy tastes should serve as a warning that we are not about to get a second helping of "The Debt to Pleasure," Lanchester's first novel, a flamboyant Nabokovian pastiche that dined out on a svelte mixture of dark deeds and exquisite epicureanism. Mr. Phillips is about as epicurean as a paper clip, and his life is a catalog of pleasures deferred, remembered or wholly imagined. Lanchester could perhaps have called his book "Pleasure: The 12-Part Repayment Plan." What Mr. Phillips lacks in savoir-faire, however, he makes up in peculiar literary pedigree -- stretching back to all the windup clerks who scurry through the shadows of modernism. With his neat habits and bashful longings, he could be the grandson of T.S. Eliot's J. Alfred Prufrock -- assuming, of course, that Prufrock ever got himself a date. And you can't give your hero an eye for porn, and then situate that eye behind black Michael Caine specs, without calling the ghost of Philip Larkin to the party. If Mr. Phillips' job as an accountant ever fell through, he could always strap on some book covers and apply for a job as a poetry anthology.

Actually, his job as an accountant has just fallen through -- after 27 years, his company has made him redundant -- although, as is traditionally the case, Mr. Phillips hasn't quite plucked up the courage to tell his wife. Instead, out of force of habit, he swings into his usual orbit. He leaves home in the morning, catches the tube into central London and traces out the ghost of a normal working day, with detours to the art gallery, or the park, to ponder his place in the grand scheme of things, and to ask why the grand scheme of things hasn't incorporated any smaller schemes involving full female nudity. On any given day, Mr. Phillips works out, there is an average probability of 96.7 percent that he won't have sex. Quite frustrating, really, given the number of British women willing to take their clothes off for porn mags and the like: around 16,744, he reckons, the population of "a town one-and-a-half the size of St. Ives." You might wish to attribute such clean computations to some version of Englishness -- in particular, to the England of nudist camps, streakers, "Carry On" films and Benny Hill -- wherein lust seems a pursuit no less jolly than croquet. Alternatively, one might wish to see it as the sign of a writer not wishing to get his hands dirty or let any grit into the workings of his elegant conceits: For a book about a dirty old man, "Mr Phillips" is suspiciously clean fun.

Inevitably, it puts on a less dazzling display than "The Debt to Pleasure," its prose chugging along at a steady 5 mph, although occasionally Lanchester, like a Formula 1 driver stuck in a VW Beetle, can't resist letting his foot slip on the accelerator: Embarking on one of his faux-pedantic riffs, he can't hide his racy intellectual brinkmanship or his taste for paradox, for thoughts that can touch the tips of their toes with their tongue. It seems an unlikely cast of mind for an accountant, who should prefer his thoughts to work their way to their appointed conclusions only after having waited patiently in line. Maybe it's what got Mr. Phillips fired.

It goes without saying that the book is virtually plotless. Toward the end we get a pileup of narrative incidents -- a trip to a porn flick, a stop at a church, even a bank heist of sorts -- but they give off a faint whiff of panic, as if Lanchester had suddenly worried about leaving his readers empty-handed. He is nothing if not an immensely considerate writer, and never less than disarmingly readable. One of the reasons, though, that Mr. Phillips and his ilk have been more memorably served by poets than by novelists -- one reason why Larkin's Mr. Bleaney sneaks ahead of H.G. Wells' Mr. Polly in popular regard -- is that they are such naturally prosaic creatures that only a forced abduction into poetry provides them with the necessary creative friction and gives their free-form longings a frame.

And "Mr Phillips" is, in fact, at its best when it drains of happening and relaxes into the humdrum. This happens most often in transit. When Mr. Phillips is on the tube or the bus, and his thoughts turn to his fellow passengers -- caught in their internal dramas of self-justification, or else just picking their noses with a "gourmandly air" -- "Mr Phillips" softens with imaginative largess: It becomes a touching prose poem about commuter camaraderie. Maybe this needed to be not more of a novel but less of one.

Tom Shone is a staff writer for Talk magazine.