Vicious in the ring, vicious on the page

In "The Devil and Sonny Liston," ace reporter Nick Tosches pumps dangerous levels of testosterone into his portrait of the fighter Muhammad Ali humiliated. 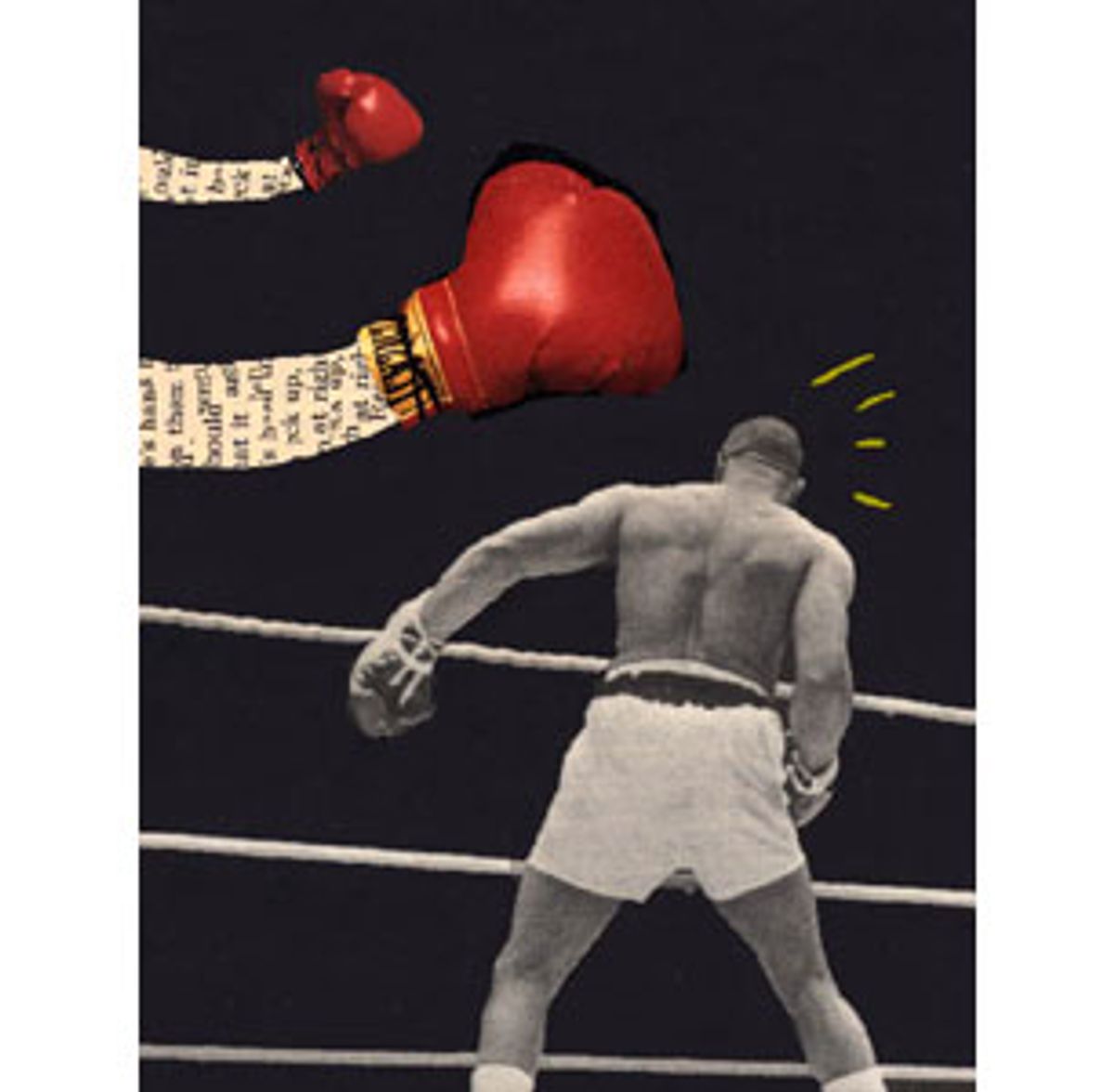 To the list of white journalists who
have underestimated Muhammad Ali we can
now add Nick Tosches. Ali figures
only in the last third of Tosches' "The
Devil and Sonny Liston," but Tosches'
treatment of him says much about the
fantasies that power this book. Here is
Tosches after Ali (then Cassius Clay)
leaps into the ring at the conclusion of
Liston's rematch with Floyd Patterson in
1963:

And, hell, man, fuck youthful: he was 21
years old, a grown man, and it was not
so much youth he was full of but
childishness.

A photograph taken before the fight that
night shows Clay in a checkered sport
jacket, eyes bulging, mouth open and as
wide as the Holland Tunnel, screaming
his praise for himself, while
entertained white onlookers
smile.

You have to hand it to Tosches: He may
not be the first writer to turn himself
into a goddamned fool by dismissing Ali,
but at least he finds an original way to
do it -- and it would take someone
highly original to paint Ali as a
cartoon darky making the white man
smile.

He was, at this point in his
career, seen as an audacious but
enamouring child, a frivolity of the
noble white man ... His sense of humor
... was not much developed beyond the
playground realm ... His tiresome and
trying wit, his harmless and drably
colorful shows of playfulness, and his
affected audacity were perfectly suited
for the media of the day ... Clay should
be regarded as the first made-for-TV
boxing idol. As he danced and cavorted
in acceptable and inoffensive
outrageousness before the masses and the
cameras and the microphones of
mediocrity, so mediocrity embraced
him.

Bullshit. Tosches allots a single
sentence to the thrill that a proud
young black man who wouldn't play humble
gave African-Americans in the early
'60s. His claims that Clay was a court
jester to the white middle class are
laughable to anyone who remembers the
suspicion and hatred Clay aroused even
before he converted to Islam and defied
the draft. In a country undergoing a
defining struggle with racism, how could
the reaction to a boasting black
loudmouth be any different?

Tosches writes about the fear that
Liston's 1962 fight with then-champ
Patterson aroused in black
America. The soft-spoken, insecure
Patterson (the subject of the most
moving section of David Remnick's Ali
book, "King of the World," was a role
model, while Liston -- mean outside the
ring, vicious inside it and mobbed up on
top of that -- was someone most black
Americans considered the opposite.
Tosches doesn't address the dilemma that
a Liston-Clay match posed for blacks,
who, all too conscious of white opinion,
felt they were being forced to choose
between a thug and a braggart. Nor does
he cite any of the racist ridicule
that such established sportswriters as
Jimmy Cannon and Red Smith directed at
Clay. What accounts for Ali's appeal, in
Tosches' view, was his ability to play,
for white writers, "the dream cards of
manliness, racial understanding,
provocative sensibility and bond between
writer and warrior."

The key to Tosches' attitude lies in his
dismissal of Ali's fans in the press as
people "who could write no better than
they could fight." In much the same way
that Albert Goldman's "Ladies and
Gentlemen: Lenny Bruce!!" was a
performance designed to show off the
author's hip credentials, "The Devil and
Sonny Liston" is designed to demonstrate
that Tosches is fit to walk in the
shadow of the King Motherfucker himself.
While Liston demolishes opponents with
the brutality of his blows, Tosches goes
down the mean streets of professional
boxing, ventures into the shadowy
corners of mob dealings and dares to
reveal the fixed fights. He wants to be
on the page what Liston was in the ring:
the man who will not be fucked with.

But a biographer who aims to be a
mythmaker may wind up dealing in
inflated pulp archetypes. Tosches turns
Liston into a white writer's fantasy of
black rage. Where his Jerry Lee Lewis
biography, "Hellfire," was a mythic
battle between sin and salvation for his
subject's soul, this book is a story of
the devil triumphant. To Tosches, Liston
is the walking embodiment of bad voodoo,
"the big bad nigger who looked at you
like he didn't know whether to drink
your blood or spit on you, or, worse,
like he didn't even see you with those
deep dark grave-dirt-colored dead man's
eyes of his; the big bad nigger who come
up here from way down there and took
people round the neck from behind like a
beast."

Granted, Tosches is a remarkable
reporter. He digs up hangers-on and
fixers and flunkies who you would have
thought had gone the way of sharkskin
suits. But I couldn't keep straight the
promoters and the mobsters who populate
these pages, or sort out their deals and
their double-crosses. After a while, I
wasn't sure if it mattered. Like Martin
Scorsese's "Goodfellas," "The Devil and
Sonny Liston" is high on the big-balled
braggadocio of hoods and mobsters.
Scorsese got by with his adolescent
fascination through sheer energy. Bogged
down in the swamp of literary pulp,
Tosches sinks.

And though he has a reporter's
instincts, he doesn't have a reporter's
discernment. In one section, Chicago
attorney Truman K. Gibson (who helped
Joe Louis out of the financial morass of
his later years) tells Tosches that in
his years in boxing he knew of three
fixed fights. Tosches names two and then
demurs: "As for the third fix, I doubt
if history and the lawyers that stand
between these words and my paycheck are
ready for that one." That's a tabloid
tease -- a shocker too hot to reveal.
But what prevents him? Either he has the
evidence to back up his claim or he
doesn't.

It's in the allegation that Liston's two
fights with Ali were fixed that Tosches'
judgment is most in question, though.
He's hardly the first person to make
that claim. In the first fight, Liston
simply refused to come out of his corner
for the seventh round. In the second,
Ali's right felled Liston in the first
round. If these were fixes, they were
spectacularly obvious ones. Tosches
makes a good case that a man of Liston's
temperament would make a fix
obvious out of plain resentment. And he
includes the assertions of Liston
associates that Liston said he threw the
first fight.

But whatever the truth is, the way he
calls the fights themselves feels off the
mark. Ever eager to diminish Ali, he
insists the boxer was faking when he
claimed temporary blindness in the fifth
round. (Liniment applied to a cut under
Liston's eyes had gotten onto Liston's
gloves and into Ali's eyes.) But A.J.
Liebling, whose writing on boxing is
among the best, claimed that the best
fighter he ever saw was Pete Herman, who
had been nearly blind at the time
Liebling saw him fight. (Among other
things, Herman would move his head to
draw punches and determine his
opponent's position from where the blows
passed him.)

Tosches claims that the "phantom punch"
(as it's come to be known) of the second
fight was "a blow so slight that few
could see it." Really? A few years ago,
at the Boxing Hall of Fame in Canastota,
N.Y., my wife and I took in a
documentary on Liston. When it got to
the rematch with Ali and the "phantom
punch" (recorded by one camera), I heard
my wife gasp, and when the punch was
rerun in slow motion, I could see
Liston's neck snap back and his head
crumple onto his right shoulder as the
rest of him followed suit all the way to
the canvas.

In fairness, Tosches is careful to point
out that the victors of fixed fights are
never in on the fix. (It has to look
believable.) But even if Ali became
champ through a fix, somehow he stayed
champ -- and that's territory into which
Tosches doesn't venture. Joyce Carol Oates has observed
that after the government deprived Ali
of his peak fighting years, he came back
to discover that while his youthful
speed was gone, he could take a punch.
If the older Ali could withstand the
blows of George Foreman -- a fighter who
was probably the equal of Liston in the
power of his punch -- couldn't a younger
Ali have withstood the blows of Liston?
Ali's triumphant strategy in Zaire in
1974 was to let Foreman punch himself
out and then move in to finish him off.
Couldn't he have worn down Liston in the
same manner?

Tosches knows there's a great story
here. And we may get it in the upcoming
film in which Ving Rhames is slated to
play Liston. But his tough-guy stance
and his slumming infatuation with sleaze
get in the way. He knows how to sort
through rumor, making a convincing case
that Liston's death in 1970 (apparently
from a heroin overdose) wasn't the mob
hit it's been claimed to be. But he's
not above allowing rumor to advance his
view.

The contradictions of Liston are
worth exploring. But have we traveled
much beyond the sentimentality of that
old boxing weepie "The Champ" when
Tosches tells us that Liston was kind to
children or that one of the mourners at
his funeral was his adopted son? Tosches
comes across, finally, as one more
stunned child mourning a fallen idol,
his prose the embarrassing result of a
childish fantasy that has been pumped up
to convince us of its manly resistance
to fantasy.