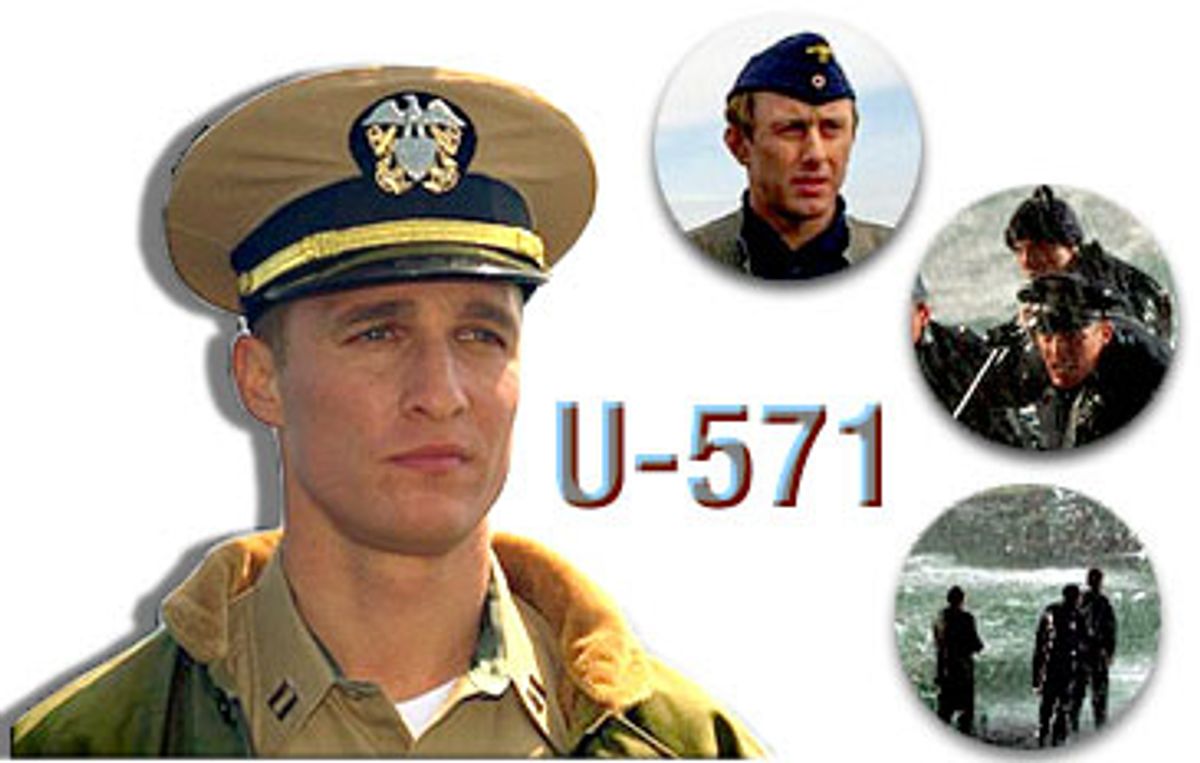 In "U-571," it's the middle of World War II and a group of American sailors who have captured a Nazi sub are weathering an attack of depth charges. Harvey Keitel, in the unlikely role of the old salt, is remembering surviving a similar attack in World War I. "One came so close," he says, "it rattled four teeth out of the skipper's head." What rattled the heads of the people who made this movie?

The plot of "U-571" has to do with an American mission to board a crippled German U-boat and capture the gizmo that will allow the Allies to crack the German Enigma code. The sailors' ride home is torpedoed during the raid, so our heroes have to make it to safe ground on the damaged German sub. But the real story "U-571" tells is a familiar and depressing one in Hollywood: that of a filmmaker who gets a chance at a big-budget action movie because his first picture was a surprise hit -- and proceeds to obliterate all traces of the talent he showed.

Jonathan Mostow's first movie, "Breakdown," was a lean, tense thriller, a plausible nightmare. From the start, "U-571" is bombastic and anonymous. The opening sequence is an example of the ineptitude and waste of Mostow's approach here. The scene takes place aboard the German sub as it's being attacked. The camera shakes as the mercilessly amplified Dolby-sound explosions pound our ears. We see water pouring into the sub, men scurrying in a blind panic, even one guy being engulfed in flames. What is the purpose of this sequence? The plot doesn't require it, since the information it conveys -- that a Nazi sub has been crippled after an attack -- is covered a few minutes later in the scene where the sailors are briefed on their mission. And it's not there because we have any stake in the fates of these characters -- that is, unless you get torn up watching Nazis get clobbered. The sequence is the crudest form of action-movie tease. Mostow piles on the explosions and the disorienting camera movement, and since this is the beginning of the movie, we know that he'll have to top it later on.

But topping yourself pyrotechnically isn't the same thing as telling a story. Mostow is itching to show off what he can do in the close quarters of a submarine. "U-571" is not recommended for anyone suffering from claustrophobia or a migraine. What with the frenzied editing and the invading water and the sparks and the blurred camera movement corresponding to each big boom, it is nearly impossible to tell where any of the characters are in physical relation to one another. Large-scale chaotic action has to be clear and clean if we're to get swept up in it. (Think of that incredible sequence in "Three Kings" in which you're able to follow the course of each bullet in a gunfight.) "U-571" may be the shoddiest and most incoherent piece of big-budget action moviemaking since "Armageddon." It's less about telling a story or providing suspense than about spectacle.

One of the major casualties of Mostow's unintelligible approach is the actors. For most of "U-571" you can't even tell the names of most of the characters, let alone tell them apart. Once a few do become distinct, you wish they'd stayed indistinguishable. Right out of central casting circa 1942, the characters include Keitel's experienced battle vet, the just-married young sailor, the "why, he's just a kid" sacrificial lamb, the lone black man and the up-and-comer who has to prove his mettle. This last role is played by the inexplicable Matthew McConaughey. It's said that Houdini used to perform a trick in which he would thread meat hooks in his mouth. McConaughey sounds as if he were using his cake hole to solve a Rubik's Cube covered in maple syrup. His words keep slurring and shifting, and his "How's this for intensity?" stare must be the least expressive in movies.

But then there's not much to express here. The dialogue in "U-571" is full of jaw droppers. My favorites include: "I'm a sea dog. I need some salt air"; "Where's your date? It's not like you to arrive stag like this"; the ever-popular "She's old, but she'll hold"; and "Mr. Tyler, please don't tell the other guys I'm half-German. They'd hate me." This last is spoken by one of the youngest of the crew. (Presumably his crewmates think that "Wentz" is a fine old Irish name.) Mostow's direction is so clumsy that when this sailor finally does speak German (in a moment that saves his buddies from the Nazis), there's not even a shot of the other sailors registering their surprise.

"U-571" ends with a dedication to the men who risked their lives to capture the German codes and a credit crawl listing the dates of those missions. Entertainment Weekly reported this week that the film has set off controversy in England because the men who actually broke the Enigma code were British while "U-571" makes it a case of Yankee heroism. Those slighted Brits may breathe a sigh of relief when they see the movie, and the Americans referred to in the end credits may wish their mission hadn't been mentioned in this trashy context. Real heroes deserve something more than a monument made out of cheese.