Who was he? This fascinating study is the closest thing to a biography of the man who sent Jesus to his death that we'll probably ever have. 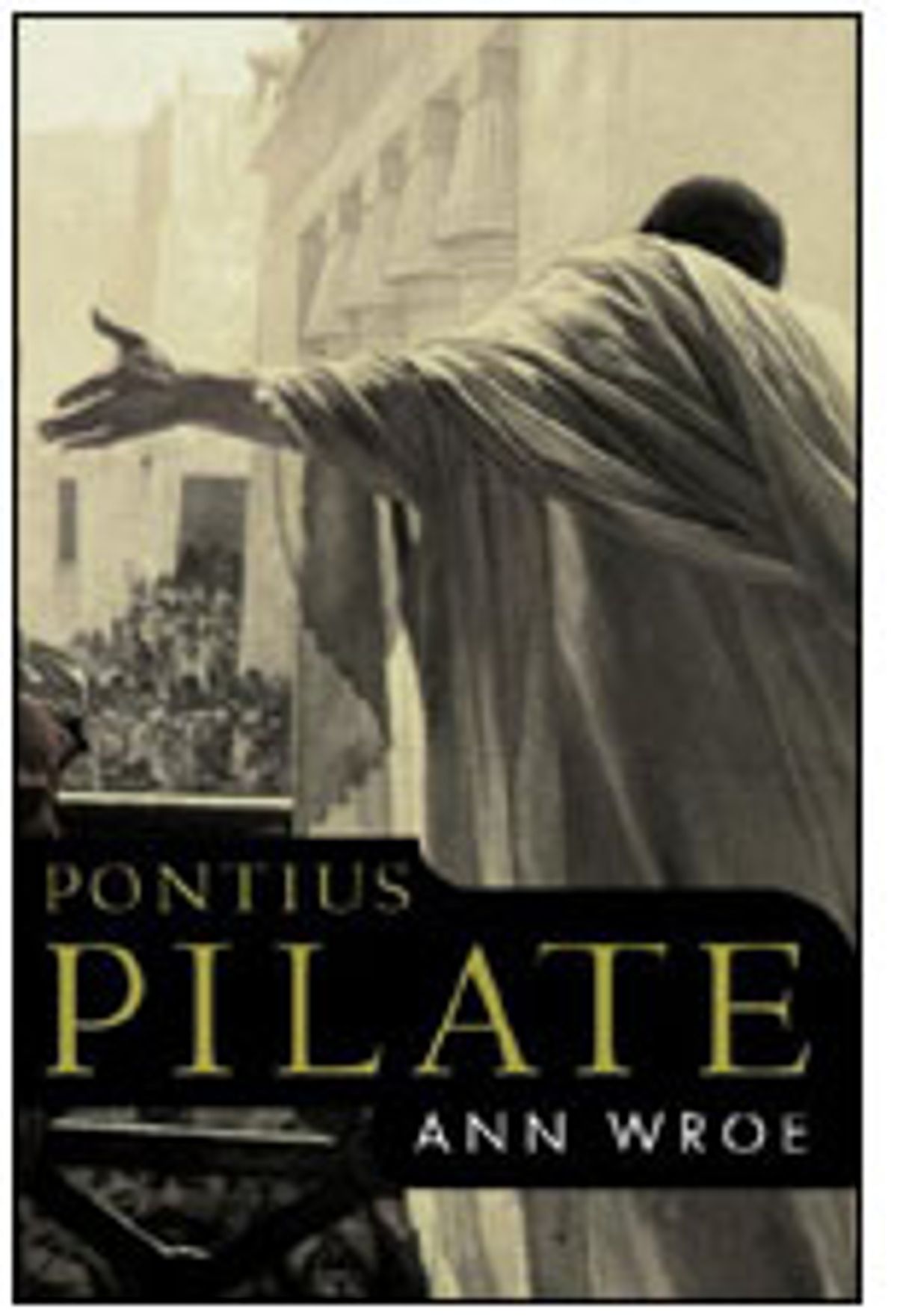 "Why Pontius Pilate? Couldn't you
choose a different subject?" That's how
Ann Wroe opens her superb "Pontius
Pilate," taking the words right out of
your mouth. Wroe, editor of the American
section of the Economist and its former
literary editor, admits to playing with
fire by encroaching on ground sacred to
classicists and biblical scholars alike.
She has little material to go on -- some
coins, one inscribed stone, a few
paragraphs in the ancient historian
Josephus, three pages of the Alexandrian
philosopher Philo.

There's the sensitive
topic of anti-Semitism -- Pilate's
detractors were more than willing to cut
him some slack during the Crusades, the
Inquisition, the Dreyfus Affair, Czarist
pogroms and numerous other episodes of
mass hysteria and hatred. Add to that
the endless theological debates over the
Resurrection ... Why Pontius Pilate?
Because he was there.

Equipped, then, with scraps of change,
papyrus and a pocketful of dust, Wroe
chases Pilate's flitting shade across
the centuries, working up a speculative
but convincing portrait that draws on
mystery plays, folklore, apocryphal
gospels, hagiographies and medieval
sources.

Indeed, Pilates abound. There's
Pilate the Spaniard, born in Seville, a
flashy, garlic-crunching character who
couldn't wait to get to Rome; not
surprisingly, the Spanish disown him.
Then there's the German or Alpine Pilate
in Caxton's ecclesiastical compilation,
"The Golden Legend," who became popular
in the Middle Ages and spread through
Northern Europe like the plague; this
Pilate adapted local costumes and
customs wherever he went -- the Lucerne
Pilate is a margrave in fancy dress, the
York Pilate is a pompous magistrate and
so on -- in plays and tales steeped in
Christianity and native bigotry. (The
Oberammergau Passion Play comes to
mind.) Hollywood and Cinecitt` Pilates
have usually been effete if not bitchy
or fey.

But the likeliest Pilate came of noble
stock, the Pontii of Samnium, a
mountainous region near Rome; he was
enough of a city boy to conceal his
country roots and play up to men of
position. Minor army commissions and
provincial postings depended on
patronage, and the infamous Sejanus,
commander of the Praetorian Guard and
right-hand man to the emperor Tiberius,
became his mentor.

Wroe seeks most of her clues in the New
Testament, however, combing lines for
hidden meanings and patterns, which
coalesce with her classical and European
findings into an elaborate mosaic.
Essentially, Pilate comes across as an
oaf, a man out of his depth. In St.
John, the most controversial of the four
Gospels, he appears almost sympathetic
to Christ. (Wifely influence, no doubt
-- Procula falls for the pale Galilean.)
Pilate probably was out of his
depth, Judea being a hotbed of civil
unrest; like most bureaucrats, he wanted
a quiet life and to him Jesus was simply
a troublemaker, a rabble-rouser. The
standard Roman punishment in such cases
was the cross, and Pilate took the easy
way -- a legalistic one -- out of a
potentially explosive situation. We
don't know what happened to him after
Judea (he was an ineffectual governor
with few friends left in high places),
but exile is one possibility, and that
would have been living death to a true
Roman -- nonperson status, if you will.
(Ovid, banished to the shores of the
Black Sea, would sit down and weep when
he remembered Rome.)

The crux of the matter is that the Gospels
and the Pauline books of the New
Testament give slightly different slants
on the historical events and personages,
reflecting the individual (or
collaborative) visions of their authors.
Views conflict and the authors are
remote. Your Pilate, as well as your
Christ (or your Judas or Barabbas or
Paul), may be as good, bad or
indifferent as mine. "What is truth?"
Like beauty, it's in the eyes of the
beholder.

Despite her brilliant exegesis, Wroe
senses that the flesh-and-blood Pilate
has slipped through her fingers. What
defies her isn't, as she phrases it,
"the grand arcana of Roman myths and
gods, or their revolting quack medicine,
or their sensual appreciation of blood;"
it's the details. As she correctly
points out, the ancients saw with
different eyes; Marcus Aurelius'
absorption in the minutiae of nature --
for instance, his perception of beauty
in putrescence ("olives, which when they
fall by themselves and are near
decaying, are particularly pretty to
look at") -- are of another sensibility,
another world.

In an echo of Hannah Arendt's famous
verdict regarding Eichmann, Wroe ends on
this disquieting thought:

He was the essence of evil
or the essence of goodness: God's
rejecter or God's embracer. These
opposing legends had taken on lives of
their own. Yet they had both sprung,
however far back, from a civil servant's
moment of uncertainty. There had been
potential in Pilate at that moment for
darkness or light far beyond the routine
experience of a Roman prefect. Even he
seemed to sense it. The tiny seed had
lodged in his heart or his mind,
suggesting infinite possibilities. He
could take untraveled roads, open hidden
doors, escape the bounds of earth and
flesh, exceed himself. Or he could stay
as he was: shrug, scratch his ear, write
another memorandum.

He stayed as he was. As most of us
do.