David Allyn talks about his history of the sexual revolution, in which he says talking about sex is sexier than sex. 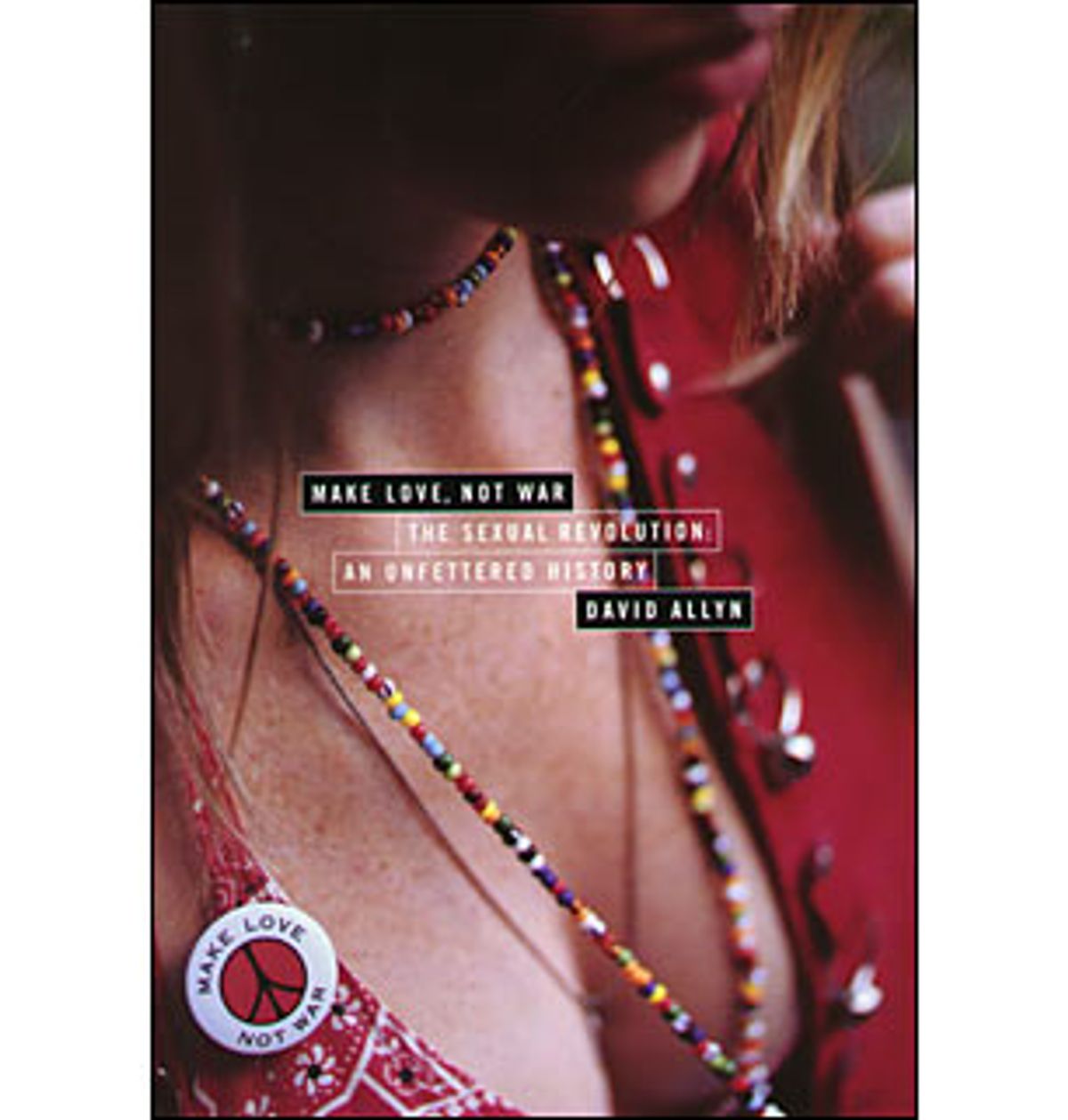 If you were born in the United States
before, say, 1974, "Make Love Not
War" is one of the most intimate
histories you can read. All of us were
either adult participants or child/adult
observers of the so-called sexual
revolution, an era that began with the
legalization of birth control in the
early 1960s and proceeded with the
invention of the Pill, the miniskirt,
the R-rated movie, the practice of wife
swapping, non-sexist sexual
cohabitation, gay liberation, American
bestiality and -- what have you.

David Allyn didn't interview me and he
probably didn't interview you, but our
experience is as valid as anyone else's.
The fun of reading "Make Love Not War"
is bouncing our personal histories
against Allyn's "official" one to see
what he got right.

And mostly Allyn gets it wrong. Not
factually, but in spirit. Right off the
bat Allyn assigns too much cultural
importance to the topless bathing suit,
as if this slight cultural gift from
France were somehow equal in importance
to or even responsible for the invention
of the Pill. But this slip is just a
judgment call -- after all, the kid
wasn't born back then.

Allyn is just really pissed off.

His latent anger at the sexual
revolution is not because he was too
young to be a sexually active
participant. Allyn writes from the view
of a neglected child. But this doesn't
invalidate his history. Instead, it
makes the book more fascinating. "Make
Love, Not War" is the first salvo from a
children's crusade opposed to any era
that prefers adult pleasures to those of
its children.

In your book, you say most of the
pleasure of sex comes from
talking about having had it -- shall you
and I have some fun?

When did you begin writing this
cultural chronicle?

It was my history dissertation at
Harvard. I started graduate school in
the fall of '91. I began it the summer
of my second year. I'll let you do the
math.

It's driven everyone else crazy. A
friend recently told me that for
years he avoided going to lunch with me
because he didn't want to have to answer
personal questions about his sex life.

So, as a historian, why are you so
pissed off about the sexual
revolution?

Oh. [Pause.] See, I really didn't want
it to come across that way.

Have people been saying this?

But you end the book with an
experience of your angry peers --
children whose parents went through the
sexual revolution. Like the girl whose
mother missed the kid's school play
because of an appointment with a sex
therapist.

I'm eternally grateful for the
transformation of our society. In 1965
birth control was illegal in the state
of Connecticut. I hope to God we don't
go back to that.

What did you observe your parents
doing? I assume they weren't wife
swapping.

My parents got divorced when I was about
4. My father moved to a singles colony
down near Atlanta and then moved to L.A.
He dated lots of flight attendants. And
my mom went to Club Med and met a man
and fell in love and got married.

As your generation's first historian
of your parents' sex lives, what was the
relationship between the sexual
revolution and divorce?

You started to see your parents as
sexual beings at a much earlier age --
when they're dating other people. I used
to go on my father's dates. It was
impossible not to see him in a sexual
light. He had a water bed and the whole
thing. That definitely had an impact.

So your generation didn't have to
sneak around when you were kids?

Glam rock was a big deal when I was
13 -- David Bowie, "Take a
Walk On the Wild Side." It was so cool
that I decided I wanted to be
gay even though I still hid Playboy
magazine under my mattress. It didn't
occur to me that this meant you had sex
with men not girls. Since I wasn't
having sex with anyone, this concept was
beyond me. Homosexuals just seemed the
ultimate rebels.

That's a great story. I wish I'd
interviewed you. I talk a little
about that sense of possibility that
people had at the time and the real
desire to break down polar opposites,
very simplistic notions of sexual
identity.

People thought that it was really going
to happen -- that you could find a
rational approach to sex. That you could
abolish jealousy. You could abolish all
of our hang-ups and shame and fear. And
that was the national conversation at
the time. I think that is gone. I think
people have found there are two ways to
look at it. You could say people have
gotten resigned, or you
could say people got realistic.

I think there were two sexual
revolutions in the 1960s/'70s. There was
the practical revolution, which was gay
rights and birth control and everything
that meant in regard to dating. And the
second revolution was all that
theoretical "free love" stuff. Is there
any historical parallel to this pair of
revolutions?

There was a sexual revolution in the
1920s. It wasn't as widespread,
deep -- wait, don't use that
metaphor! [Laughs.] The 1920s didn't lead
to as pronounced a change in behavior or
in opportunity as the 1960s. You didn't
have group sex clubs for heterosexuals
springing up on the Upper East Side of
New York. I think every historical
moment is unique because it's shaped by
different factors of that time that give
a particular flavor and
texture to it. But it wasn't the first
time people advocated various forms of
sexual liberation.

Do you think there's validity in the
movement heralded by 1990s "modesty girl" Wendy Shalit, who wrote
"Return to Modesty"?

In our popular culture there are all of
these contradictions that we
aren't willing to look at directly. The
real revolution of the sexual
revolution was the end of monogamy --
the idea that you're only supposed to
have one sexual partner for life. Today,
popular culture says, "You do that, and
you're prudish and kind of weird." We're
supposed to have multiple partners --
only one at a time -- but multiple. And
not too many -- you're not supposed to
have hundreds and hundreds. The culture
sends out these messages.

How did the sexual revolution
end?

In the late 1970s there was a very clear
backlash from both the left and the
right. I think that people felt the
country was in decline for all sorts of
reasons, from the decline of the economy
and the decline of the inner city, and
sex was an easy target. The right
attacked sex-education books and gay
rights and the left went after
pornography. That's also part of the
legacy -- anyone who's under 40 now grew
up in a time when the left and right
were going after sex. So sex was still
very charged in that way.

The neglect you felt as a kid is
reflected symbolically at the end of
your book. The last gasp of sexual
liberation -- "nothing is forbidden,
everything is possible" -- was to demand
the acceptance of pedophilia. You could
almost say, metaphorically, all those
sexually "liberated" adults were about
to fuck you kids, but then -- just in the
nick of time -- their revolution went
kaput.

There were several radical feminists in
the last of the '60s and early '70s who
actually advocated eroticism between
children and adults because they were
trying to be philosophically consistent.
Andrea Dworkin said that we needed to
break down all of our taboos. We needed
to allow for the natural eroticism
between children and adults, and animals
and adults, animals and children,
and break down the incest taboo. When I
read that in Andrea Dworkin, I thought,
"Wow."

She backed down quite a bit since
then.

She did. What happened was she got a
phone call from Mary Daly, the
professor at Boston College, who said, "'You don't really want to be saying
those things. You have no idea how
seriously the damage is that can be
caused by this." Dworkin backed down.
I'm of the belief if Andrea Dworkin
hadn't gotten so famous for her
anti-pornography campaign, she would
have backed away from that as well.

But taboos have value, don't you
think?

Sex wouldn't be as interesting as it
is if there weren't taboos.

Maybe. I'm leery of taking that argument
too far. Life may be more
interesting under a Stalin-like regime
-- it might be more exciting; there's
the passion of being a true rebel. But I
don't happen to want to live under
Stalin.

But I don't want to live under anarchy
either. In order to have democracy you
do have to have some rules. Some taboos.

How old is your kid?

My daughter is 18 months.

So you've got a long time before you
need to worry.

About her having sex?

And shepherding her through whatever
they will be doing in 2018.

I definitely get confronted by that. I
think of myself as easygoing
and open-minded. Then I watch "Buffy the
Vampire Slayer" and go, "Wow." I do
believe in stasis. I don't think we
should be trying to hide things from
kids, but we need basins of innocence. I
think that there is time for innocence.
Do I sound like a conservative?

No. Believe it or not, I remember
once being truly innocent myself.
In seventh grade, me and my first
girlfriend would play tennis in a
handball court and kinda
accidentally-on-purpose hit the balls
over the wall
so we could go back there and smooch a
bit. That's all we did. It never
occurred to us there was more to do than
that.

I'm sure eventually we would have
figured out the next steps, but my
parents found out what was going on and
freaked. They couldn't see that I was a
true innocent.

Every time I watch a Disney film I feel
that way. I love that stuff.

On the other hand, it's probably
healthy that there's an opposition
between your parents and your
sexuality.

I wouldn't have wanted my father to
have been helping me out. You yourself
couldn't actually have a girl spend the
night, could you?

The one thing in your book I think is
completely wrong is the next to last
paragraph: "Much if not most of the
pleasure associated with sex comes
not from having sex, but from talking
about having sex."

That's what you started with. The
Chicago Tribune didn't think
I was right about that either.

I think you've truly missed the boat,
my friend, if you think yakking about
sex is more pleasurable than doing it
firsthand.

I think what I wanted to stress there,
and what I didn't stress, was
talking about it mostly with
yourself. I wrote, "Talking
about ..." and then I put "even with
one's self" in parenthesis. I should
have dropped the parenthesis. It's the
conversation with yourself where I think
a lot of the pleasure lies. And you may
not be aware of the conversation. Maybe
the conversation has been around in your
head for so long it's just part of who
you are.

But the "animal nature" you mentioned
earlier is beyond civilization, beyond
words. Talking about sex is only
necessary if you yourself aren't getting
any, and your generous and wilder
friends let you live vicariously through
talking about their adventures.

I didn't mean it quite that literally --
the talking about it. The notion of the
conversation. It's a little more
metaphorical than that.