"The Consolations of Philosophy" by Alain de Botton 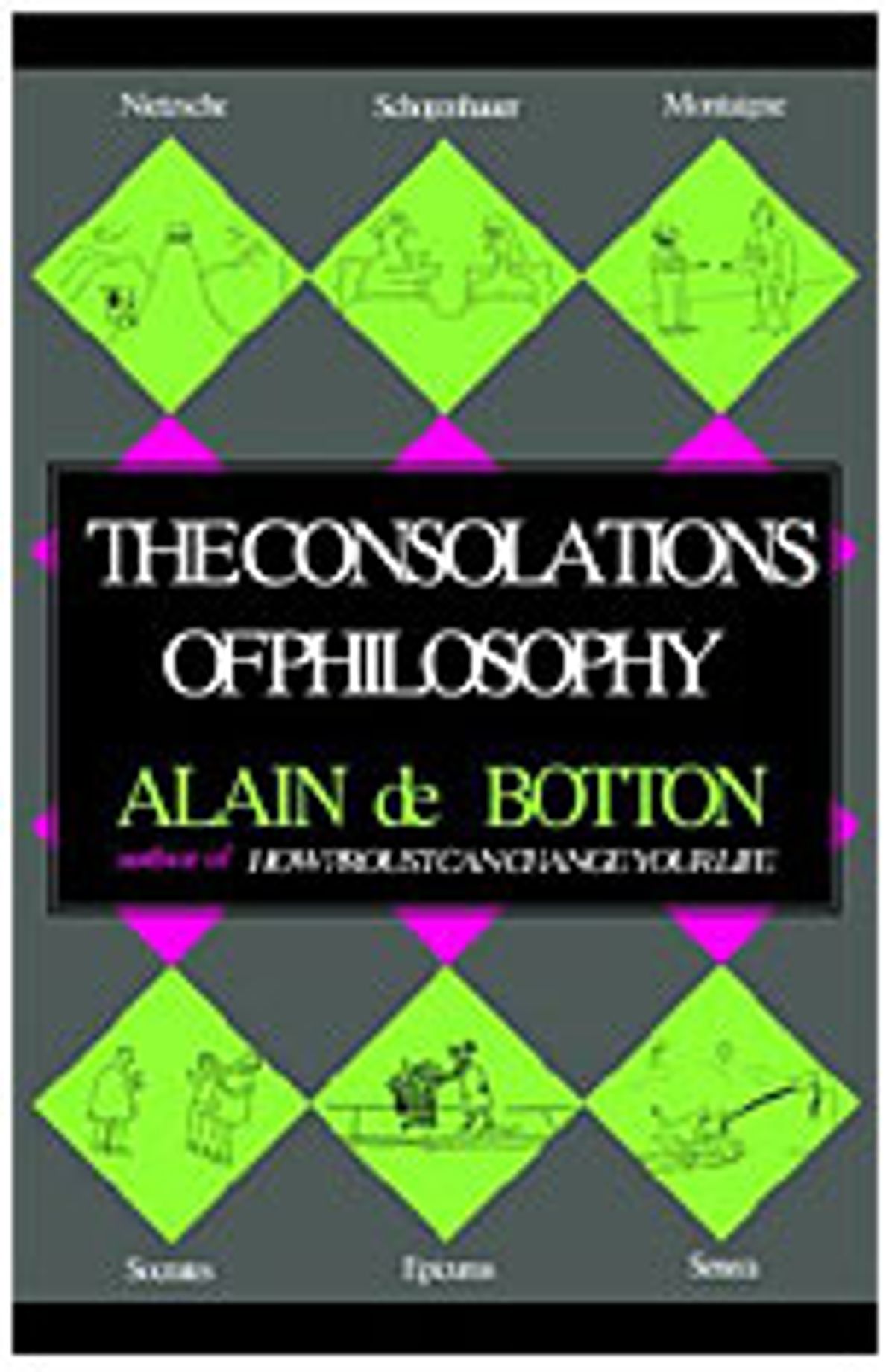 The early "for dummies" books -- on computers and auto repair -- were a fine idea. The car titles spoke to everyone who thinks she should grasp the internal combustion engine but would settle for a few troubleshooting techniques beyond popping the hood and looking concerned. But then the publishing phenomenon (908 "for dummies" titles were listed on Amazon.com at last check) took an alarming dive. Given the existence of "Astrology for Dummies" and "Coffee for Dummies," how long before we see "Doing Bong Hits and Watching Cartoons for Dummies" or "Drooling on Your Shirt Front for Dummies"?

Alain de Botton's new book represents another, equally useless side of dummymania. His "The Consolations of Philosophy" is essentially "Socrates, Epicurus, Seneca, Montaigne, Schopenhauer and Nietzsche for Dummies," and one has to ask, Who is this book for? Readers interested in the interplay of thought and language or of earthly and ideal beauty are likely to be insulted by de Botton's boiling down the impassioned struggles of these six thinkers into "Chicken Soup for the Soul." And those who aren't interested in such things are unlikely to read a book with "philosophy" in the title, anyway.

De Botton isn't even providing a way into his consolers in the manner of the "For Beginners" series of illustrated books on Sartre, Nietzsche, Foucault et al. Those volumes provide decent overviews of the subjects' lives and works, whereas de Botton rarely discusses specific writings but instead sprinkles unconnected, unattributed quotations around his recitations of his own troubles. His last book, the 1997 "How Proust Can Change Your Life," was the same twee blend of self-help manual and illustrated fanzine, but it at least encouraged the reader to take a crack at the seven volumes now known as "In Search of Lost Time."

De Botton introduces his Big 6 as "a group bound by a common interest in saying a few consoling and practical things about the causes of our greatest griefs." He then assigns each one to something that has made him feel bad -- Socrates to "unpopularity," Montaigne to "inadequacy" and, most bizarre of all, Schopenhauer to a "broken heart." Schopenhauer, whose closest companions were poodles, wrote that "women exist solely for the propagation of the race and find in this their entire vocation" and that love "casts itself on persons who, apart from the sexual relation, would be hateful ... and abhorrent to the lover. But the will of the species is more powerful than that of the individual."

De Botton is a graceful, amusing writer, and the highlight of each chapter is the thumbnail biography. Of Schopenhauer he writes:

After lunch ... he reads the Times -- the newspaper he feels will best inform him of the miseries of the world. In mid-afternoon, he takes a two-hour walk with his dog along the banks of the Main, muttering under his breath. In the evening, he visits the opera ... where he is often enraged by the noise of late-comers, shufflers and coughers -- and writes to the authorities urging strict measures against them.

Perhaps de Botton meant the unlikely pairings of woe and consoler as an ironic exercise. But smothering the misanthropic fire of a Nietzsche or a Schopenhauer under a snuggly feel-good blanket is pointless: There's a difference between the postmodern flattening of high and low art and plain old dumbing down. The Schopenhauer chapter is a good example of the intellectual corners de Botton cuts to get from philosopher to platitude. Working from the German thinker's biological determinism, he concludes that "we are not inherently unlovable" and "we have as much choice in the matter [of love] as moles and ants -- and are rarely any happier." Finally, he follows Schopenhauer's exhortation to conduct oneself "more as a knower than as a sufferer" with his own prim "We must ... endeavor always to transform our tears into knowledge."

There's a reason people read de Botton's Big 6 decades or even centuries later, and it's not the same reason they hang a needlework sampler of the serenity prayer in the kitchen. Here's what Nietzsche, de Botton's consolation for "difficulties," might say about de Botton's endeavor: "These teachers of resignation! Whatever is small and sick and scabby, they crawl to like lice; and only my nausea prevents me from squashing them."