The baby's abuser is still uncharged, but the issue of his death -- in surrender or at the end of painful medical heroics -- finally reaches the court. 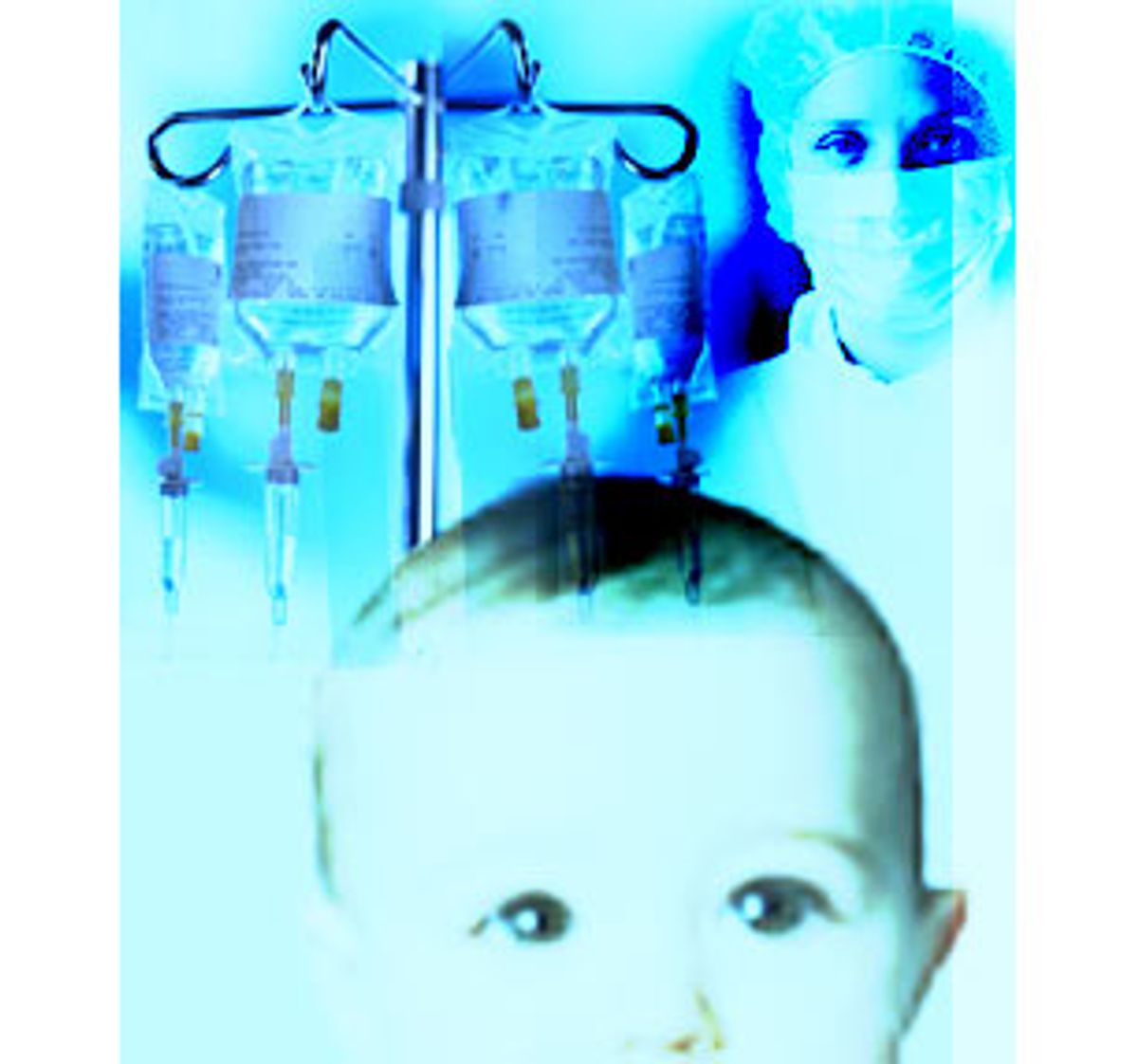 The cramped juvenile courtroom is full of people and ice cold from the air conditioning. Thirteen of us, including six attorneys, are assembled to learn the decision that will determine Thomas' fate.

There was some early drama before we all entered the courtroom, when Thomas' parents showed up with two little girls in tow. Could the girls come in the courtroom? Where would they go if they couldn't? But then it was agreed that if they sat very quietly on the back bench, they could come in.

The caseworker and I exchange raised eyebrows, alarmed that parents held responsible in juvenile court for nearly murdering their infant son are now watching someone else's children. But we are powerless to do anything about it, since there are still no criminal charges.

The judge enters and we all rise. The bailiff records everyone's presence: the parents, with separate attorneys; the caseworker, with two lawyers from the Attorney General's Office; the guardian ad litem, who is an attorney appointed for Thomas; the two little girls; the judge; and me. I am the 1-year-old boy's court-appointed special advocate.

The judge tells us she has read the motion and evidence submitted in support of the do-not-resuscitate (DNR) order. One of the AGs announces that a doctor is prepared to testify on speakerphone. The judge asks the parents' attorneys about the parents' position.

The attorneys whisper to the parents. The father's attorney says, "Your honor, my client is very disturbed by having to make this decision, and doesn't feel he can decide at this time."

The mother's attorney says, "Your honor, my client is very upset about what this decision would mean for Thomas, but she does not want her son to suffer anymore."

This is a complete shock to most of us in the courtroom. We had been told that the parents were prepared to fight the DNR order vigorously, in an effort to keep Thomas alive so that they could not possibly be charged with his murder. We were ready for testimony, medical evidence, even witnesses. Apparently they have changed their minds.

The judge speaks carefully. "I hope I haven't caused any confusion with my question. This decision is not for the parents to make, because their child is a ward of the state. Clearly, this is my decision to make. I am asking whether there is any testimony they want me to consider, or any questions they want to ask of the doctor or the caseworker. I can make my decision based on the motion and evidence already presented in writing, or I can hear further testimony."

The attorneys again whisper to their clients, then turn to the judge. Both attorneys request that the judge make the decision based on the motion only. The AG speaks up.

"Your honor, I do have the doctor here on the telephone, and I would like him to testify to his recommendations for Thomas."

The doctor, his voice slightly hobbled by the crackles and feedback of the phone, begins to speak. He talks about the extent of Thomas' injuries -- the massive head trauma, the kidney failure, the seizures, the blindness, the constant diarrhea, the excruciating pain he appears to suffer. He says that if the court grants the DNR order, doctors would still do the utmost to keep him comfortable -- they would fight infection aggressively, give him the Heimlich maneuver if he choked, give him pain medicine and carefully monitor his fluids to keep him from getting dehydrated.

He tells the judge that he is only asking not to be required to make any heroic efforts to resuscitate Thomas, unless the malady is something clearly reversible.

The father is crying silently, tears running down his cheeks, splashing the files and papers spread before him at the defense table. The mother sits unmoving, looking down, eyes wide and unblinking.

The doctor tells the judge Thomas could die at any time -- he could live a day or 10 years, but his condition is irreversible and he will only get worse. He says it is unfair to Thomas to chronically resuscitate him, and that any heroic efforts directed merely at prolonging Thomas' life would only prolong his misery and pain.

The judge's voice cracks as she thanks the doctor for his testimony. She asks the parents if they want the decision today. They nod yes.

She hesitates, looking down, expressionless, for what seems an unbearable length of time. Finally, she speaks, her voice cracking again.

"I'm going to grant this order. Should Thomas reach a point where he would need heroic measures to save his life, none will be given. When Thomas has decided he's had enough, I will let Thomas' decision stand."

The judge rises, and the bailiff bellows, "All rise." We rise and file out of the courtroom.

In the hallway outside, the parents huddle with their attorneys. The father is still crying silently, and the mother looks vacant and numb. The two little girls, who were perfectly quiet in the courtroom, giggle and hug each other, glad to be free of the silence.

The "team," those of us who work with or represent Thomas, form our own huddle. Voices shaky, with tear-stained cheeks, we somberly congratulate one another on our success.

Twenty miles away, in a nursing home for severely ill children, Thomas lies in a softly lighted room, in a steel crib, hooked to four different machines that monitor his bodily functions. He is sedated and quiet, eyes staring blankly at the ceiling. The only noises are the regular whir of his feeding machine and an occasional beep from his heart monitor.

He is done with foster care -- his medical needs are too urgent and his health too delicate to risk keeping him at home. Yet his foster mother still shows up, every day, to hold him and sing to him. She keeps his clothes and blankets in a white painted chest of drawers next to his crib, and leaves a portable stereo for him so the nurses can play music to calm him.

The nurses touch him only when wearing rubber gloves, because he has a contagious virus that could be deadly to the other children in the nursing home. The dehydration caused by the virus, combined with his kidney failure, has wreaked havoc on his blood chemistry, which is why he was finally admitted here.

His foster mother and I take turns visiting, and hold him glove-free, despite the nurses' warnings, because he seems comforted by touch -- his heart rate slows and his breathing becomes more even. I pick him up and he wails in pain, but then he quiets and settles into me as I sink into a nearby chair. He likes to be held upright with his legs tucked under him, head on my chest. The tubes and monitor wires poke out from under his T-shirt and diaper, and wend their way across the floor to their respective machines.

I feel at once incredibly grateful and unbearably sad. I am grateful to the judge, and to the parents, and to whatever forces in the universe persuaded them not to fight this after all -- to let Thomas go when his body can't hold on anymore. Yet the sadness is an overwhelming, unspeakable, pit-of-the-stomach ache that leaves me trembling, and almost afraid to hold Thomas, because each time might be the last. Everything seems, suddenly, even more tenuous, and he seems more fragile, his bottom lip sucking in and out as he sleeps, his tiny chubby fingers curled around mine, the sweet baby smell of his hair and his cheeks.

Though I hated the thought, there was comfort in the fact that, before the DNR order, if Thomas died, we might not lose him entirely -- the life support machines would keep him with us. I feel like I now understand why people leave their comatose relatives on life support for 20 years.

But I force myself to remember that it's not about those of us who love Thomas -- it's about him, his suffering and his body's ability to keep working. So I will keep visiting, and saying goodbye, and saying prayers for his comfort and my strength.