After a severe WWF smackdown, Ted Turner's WCW wants to win back wrestling fans. But will more raunch and less paunch be enough to put the league on top? 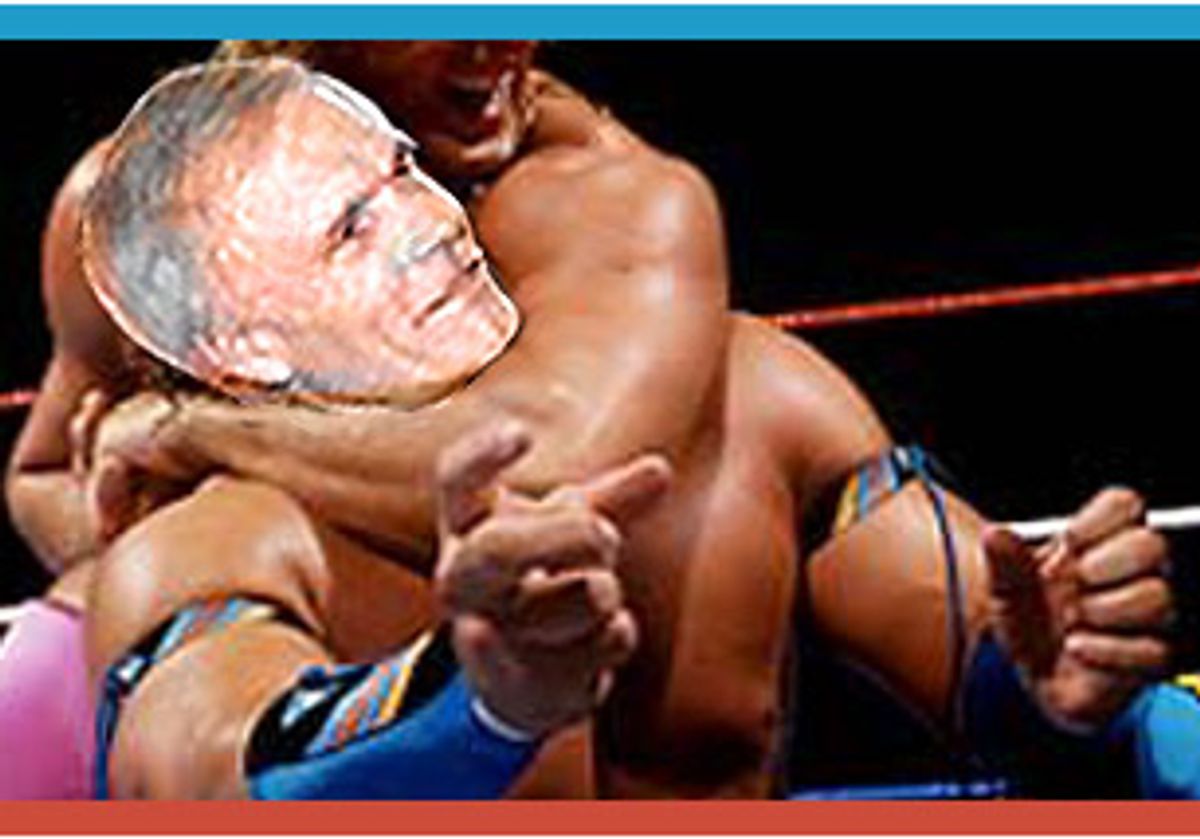 Ted Turner's once-profitable World Championship Wrestling has suffered
many indignities over its two-year decline, but the lowest point may have
arrived during the April 3 "Monday Nitro" telecast. Hyping a new WCW era
that was set to debut on April 10, ring announcers Tony Schiavone and Mark
Madden broadcast from an empty arena, walking TV viewers through a
greatest-hits show, airing old clips and documenting the rise of WCW on the
shoulders of Hulk Hogan in the mid-'90s.

It was a run worth remembering: For a time, the WCW ultimately bested its
hated rival, Vince McMahon's WWF. The battle set
the stage for professional wrestling's unprecedented popularity today. But
that was long ago, and as viewers watched they were ineluctably reminded
of how the WCW's wheels fell off. With a burnt-out creative team, aging
stars and a hesitant Turner bureaucracy that never could decide how far
down-market to chase its more vulgar WWF opponent, WCW collapsed. On
April 3, viewers watched the WCW's own announcers essentially look back
on national television and ask, "What went wrong with this company?"

It was a strange moment in the strange world of TV sports-entertainment --
but not unusual. WCW in recent months has taken on a morbid fascination
among wrestling fans, who now watch to see just how bad it can get and
how low its ratings could sink. April 3's "Monday Nitro" answered both
questions. The Nielsens showed that the two-hour show logged a tiny 1.8
rating, "Nitro's" lowest rating ever. (The second hour actually sagged to
1.3.) Just two years ago "Nitro" flirted with ratings in the 5's.

Overall, WCW's television ratings are off 40 percent from a year ago, live
show attendance has fallen 76 percent and its take at the gate is down 74
percent for March, according to the Wrestling Observer. (Some
WCW arena shows today barely draw 1,000 people.) The most telling figures,
though, come from pro wrestling's real cash cow, pay-per-view events. Both
WCW and WWF sponsor one every month. In March, 47,000 people shelled
out $29.95 to buy WCW's "Uncensored" PPV, generating less than $1 million
in revenue. Compare that to WWF's early April "Wrestlemania," the biggest
draw of the year. Nearly 900,000 fans forked over at least $34.95 (dedicated
followers had the option of an all-day "Wrestlemania" PPV package for
$49.95), for a total of more than $30 million. Not bad for a single day's
revenue.

Today, WWF's head-to-head competitor, Monday night's "Raw Is War,"
routinely doubles and sometimes even triples WCW's paltry viewership. And for
the year, WCW's ratings on TNT, as well as the shows on its sister station,
TBS, are off 40 percent from 1999, a costly blow to the Turner bottom line.
WCW is bleeding money and on track to lose $25 million this year, according
to Wrestling Observer publisher Dave Meltzer.

Compare that with WWF's money machine. In 1999, the Vince McMahon-led
company pocketed $56 million, and could earn nearly $90 million this year off
revenues approaching $400 million. In the meantime, WWF bio books by
mainstays the Rock and Mankind have shipped over 1 million copies to
stores. Ratings for NBC's "Saturday Night Live" jumped 30 percent when the
Rock was asked to host. CBS and USA are busy battling in court over WWF
broadcast rights, WWF toys fly out of stores and editors continue to line up
at WWF's door hoping wrestlers will appear on their magazine covers to
produce lucrative newsstand sales jumps.

In contrast, the WCW recently attempted to broaden the brand with the David
Arquette wrestling flick "Ready
to Rumble," starring WCW grapplers. Dubbed "moronic and
insulting" by Entertainment Weekly, it got pinned at the box office.

In other words, WWF, as a cultural entity, is on fire. How can WCW be so
cold? After all, just a couple of years ago WWF and WCW were locked in a
competitive, Avis vs. Hertz battle. Suddenly, the contest has morphed into
Avis vs. Rent-A-Wreck.

To the casual observer, WCW and WWF weekly telecasts seem to be mirrors
of one another as look-alike, beefed-up wrestlers with pounding rock themes
parade around arena rings. If only the business were that simple. Instead,
today's sports entertainment is a curious blend of buzz, luck and brains, all
wrapped in testosterone. Wrestling fans know what they like:
larger-than-life stars, plausible plot lines that maintain some semblance of
continuity from week to week and a touch of the outlaw. But they can also
smell a loser and will flee it in a heartbeat. "Brand loyalty in wrestling doesn't
last," says Meltzer. "It changes every Monday night depending on whoever's
got the hot product."

Turner and WCW have languished on the bottom before. But that was a
decade ago. And once the WCW overtook the WWF, few in the business
imagined its return to the basement would ever be so swift.

The Atlanta-based media mogul entered the wrestling ring in 1989 when he
bought the struggling WCW (then the National Wrestling Alliance) from
promoter Jim Crockett for $10 million. Getting badly beaten by McMahon's
WWF, Turner considered giving up in 1993. But things soon began to fall into
place. As McMahon battled public charges of steroid distribution among WWF
wrestlers in 1994, Turner used his deep pockets to lure WWF superstar Hulk
Hogan to the WCW, where he became Hollywood Hogan. Still trailing in the
ratings, though, WCW decided to launch "Monday Nitro," pitting its wrestlers
right up against WWF's showcase program, which also aired on Monday
nights.

Insiders called the move a mistake. But with its live telecast (compared to
WWF's then-taped shows), backstage intrigue and running story lines,
"Monday Nitro" changed the look and feel of professional wresting. WCW
was suddenly cool and its wrestlers were being invited down to do cameos
on MTV's "Spring Break." By 1998, with established stars like Diamond Dallas
Page, Bret Hart, Kevin Nash and newcomer sensation Goldberg riding high,
the WCW, enjoying sold-out shows, top ratings and strong PPV buys,
cranked out $48 million in profits.

But McMahon had an answer: the mad-as-hell, hard-as-nails Stone Cold Steve
Austin. (Insult to injury -- he was a WCW castoff.) And when McMahon
inserted himself into the ring as an overbearing corporate boss forever
screwing with Austin, he unleashed perhaps the most successful promotion
in pro wrestling history. (Of course, an unprecedented amount of profanity
and T&A didn't hurt WWF's surge either.)

At the same time, the WCW began to fall apart. Injuries to Bret Hart and, later,
Goldberg dimmed WCW's star power. Meanwhile, complacent WCW veterans like Ric
Flair and Randy "Macho Man" Savage, who hadn't bothered to learn new moves in
years, refused to step aside and let new talent shine. The company began spending
wildly on cameos from outside stars, like Dennis Rodman, Kiss and rapper Master
P. But their ringside presence only confused fans. The real trouble though, was
that WCW was created by its mercurial owner in a simpler time. While McMahon had
the luxury of turning his own company on a dime and answering to nobody (if
McMahon wanted to show a wrestler getting simulated head backstage on TV, he
did), the corporate-owned WCW was boxed in. Telling the show on the one hand to compete with
the increasingly obscene WWF and on the other not to broadcast anything that
would embarrass Turner or his Time Warner overlords was a recipe for
disaster.

Even before 1998 was over, WWF's "Raw Is War" had squeaked past WCW's "Nitro" to
become wrestling's top-rated show. By the spring of '99 it was besting "Nitro" by
two whole rating points. And by February of this year the lead had ballooned to
four points. It was even uglier on Thursday night, where WWF debuted "SmackDown!"
on UPN last year. So badly was the WCW getting beat that it surrendered the night
and moved its TBS "Thunder" show to Wednesday. On the eve of the recent
"Wrestlemania," UPN's "SmackDown!" drew a monstrous 8.2 rating.

Turner execs would be thrilled to consistently land just one-half of those
viewers. But they've got a long way to go. WCW has brought in two wrestling pros
who may just restore the company's glory days. The good news is that Eric
Bischoff is the man who took WCW to the top a few years back, while Vince Russo
is often credited with helping turn WWF into a powerhouse. The bad news? Bischoff
was also the free-spending captain of the WCW when it struck a ratings iceberg
last year. (He's also the guy who let Austin walk.) And Russo was hired once last
fall to save the WCW, but couldn't pull off a turnaround before impatient Turner
execs showed him the door after just three months.

Turner's camp hopes that what's-cool-now mindset will work to its favor. WCW's
new Bischoff/Russo look was unveiled on April 10 and won enthusiastic support
from online wrestling fans, who cheered the makeover and applauded the brewing
rivalry between young "New Blood" wrestlers and the established "Millionaires
Club" stars. Early returns show ratings have rebounded toward respectability,
too. But they're still not within shouting distance of the WWF's offerings.

The seeds for the new WCW were planted last September 10, when Bischoff left the
crumbling company and retreated to his home in Wyoming. A former ring announcer
turned ringmaster, Bischoff had become besieged and burnt out as the Smyrna, Ga.,
based company was getting lapped by WWF. At the same time, Russo was a WWF
stalwart -- a league magazine editor who'd become one of McMahon's trusted
lieutenants. He shocked the wrestling world when he moved to rival WCW, along
with WWF scriptwriting partner Ed Ferrera.

How could fans tell in-your-face WWF alums had entered their midst? WCW's
cheerleaders, the Nitro Girls, were soon featured in hair-pulling cat fights, and
"Monday Nitro" suddenly came with a TV-14 rating. But simply unloading raunch
didn't work for WCW, since it still lacked compelling stars and strong
story lines. Besides, WCW fans skew older, with an average age of 34. So the mere
chance of seeing a busty blond prance around the ring probably wasn't reason
enough for grown men to commit to watch TV for hours on end, compared to WWF,
which draws far more teens.

In January, with the ratings still drifting south, WCW executive vice president
Bill Busch moved in and demoted Russo. That touched off a backstage revolt among
up-and-coming wrestlers like Chris Benoit, who worry that the company is heading
backwards. Less than 24 hours after winning the WCW heavyweight belt, Benoit
threatened to bolt to the WWF. His title was stripped soon after, and he quickly
jumped ship.

Still, the WCW's revolving door, and back-stabbing, continued. In March, Turner
announced Bischoff was back as V.P. of operations, with Russo at his side as chief
of creative, and suddenly Busch was the odd man out. Rather than work again with
the flamboyant Bischoff, he resigned. Now Turner Entertainment president Brad
Siegel is vowing that he, Bischoff and Russo will restore order, and big ratings,
to the WCW. They're going to need some luck on their side.

Case in point: During a March WCW telecast, as announcers tried desperately to
manufacture some excitement, a crowd of fans gathered into the ringside camera
shot, with one wiseguy holding up a sign for all TV viewers to see. It read: "I
Wish I Was at Raw."