"Left for Dead: My Journey Home From Everest" by Beck Weathers

A member of Jon Krakauer's ill-fated Everest expedition gives his version of the spring '96 mountaintop disaster. 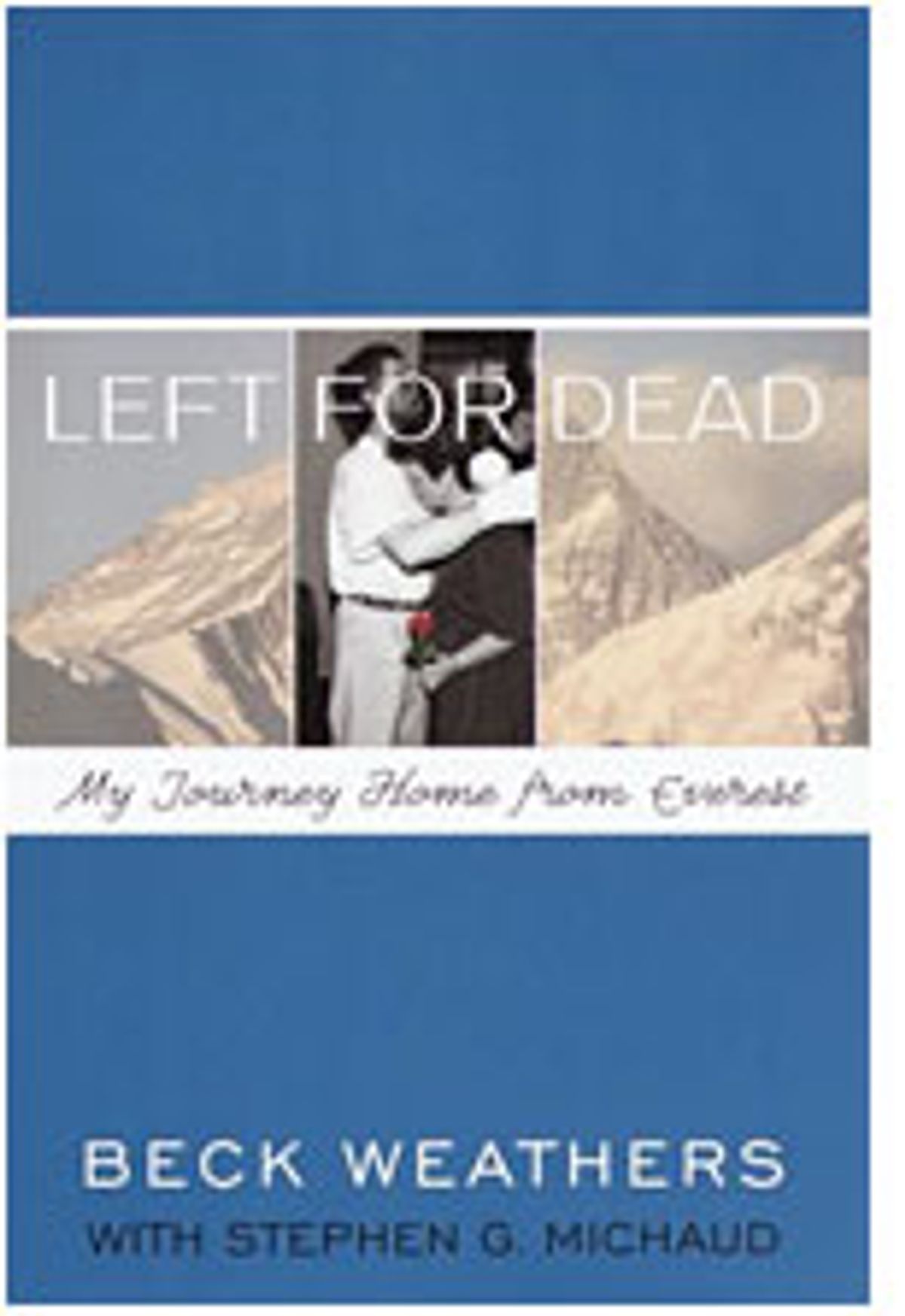 For those obsessive followers of the 1996 Mount Everest debacle who have a hankering for yet another angle on the story -- and after four prior books, two films and innumerable press accounts, obsessive seems more than a fair qualifier -- this latest report, penned by a member of Jon Krakauer's famous expedition, offers few if any revelations. Those still in search of a smoking gun should look elsewhere. In fact, Beck Weathers, the middle-aged Texas pathologist/mountaineer who arose from the ice a hairsbreadth from death after 22 hours in the storm, takes careful pains in "Left for Dead" to avoid any of the rancorous blame calling that has so defined the debacle's aftermath.

Weathers hails Krakauer's bestselling "Into Thin Air," which targeted for partial blame the late Anatoli Boukreev, a rival team's guide, as the "definitive account." But he also lauds Boukreev, who left Weathers and a teammate half-buried in the snow while saving three of his own clients, as a hero:

Anatoli later told at least three stories of what occurred out there. It doesn't matter which one was true. In that moment, by saving those three people who otherwise surely would have died, Anatoli became a hero. Let that be the way Anatoli is remembered.

The vulturous obsessives who seem determined to cast the events in black and white, bent as they are upon ferreting a villain from among the corpses, might call this attitude evasive; I call it refreshing. "Guides don't kill people," the bumper sticker might read, "mountains do."

By most accounts, Weathers was unqualified to climb the world's highest peak -- in "Into Thin Air," Krakauer characterized his mountaineering skills as "less than mediocre" -- but this deficiency hardly set him apart from the bulk of the climbers scaling Everest that spring. And he might well have made it to the top, too, had his eyes not failed him. Fifteen hundred feet above High Camp, en route to the summit, Weathers found himself effectively blind: The altitude's low barometric pressure was flattening and thickening his cornea, thus negating the radial keratotomy he'd undergone a year and a half earlier to better ensure his safety on the mountain. Giving up on his climb, he told Rob Hall, the team's guide, that he was heading back to High Camp, but Hall said no: "I want you to promise me that you're going to stay here until I get back." Weathers agreed, waiting dutifully, but Hall never returned.

Hall had perished with another client in the blizzard that detonated atop the mountain, while below Weathers huddled with members of Boukreev's team, including the much-maligned Sandy Hill Pittman, who Weathers says began screaming, "I don't want to die! I don't want to die!" Her shivery shrieks furnished Weathers his last memory -- until 22 hours later, that is, when he awoke, rather implausibly, having been left for dead by Boukreev, one of Boukreev's teammates and several Sherpas. "About four in the afternoon, Everest time," he writes, "the miracle occurred: I opened my eyes." His hands were frozen (he'd lose one later, along with the fingers of the other). His face was blackened with frostbite (he'd lose his nose, too). He hadn't eaten in three days, hadn't had water in two and was still, moreover, blind:

Several improbable, if not impossible, events would follow in succession. I would stand and struggle alone back to High Camp. Next day I'd stand again and negotiate the Lhotse Face. Then there would be the highest-altitude helicopter rescue ever. Those were the big things. The miracle was a quiet thing: I opened my eyes and was given a chance to try.

But those events on Everest, chronicled so many times (and, alas, often better) elsewhere, end at Page 89. "Left for Dead," however, is a book of nearly 300 pages -- and that's unfortunate. Some of the book's latter two-thirds explains Weathers' mountaineering background, which was mostly of the climbing-school and guided-ascents variety that another Texan with limited skills, Dick Bass, inspired in the '80s by bagging the highest peak on each of the seven continents -- having been ushered up each one by pricey guides. As Weathers explains to Krakauer in "Into Thin Air": "Assuming you're reasonably fit and have some disposable income, I think the biggest obstacle is probably taking time off from your job and leaving your family for two months."

Earnest alpinists might bristle at that sentiment, but Peach Weathers certainly wouldn't: The strain that her husband's climbing put on their marriage is the main subject of the book's later sections, much of the story recounted via Peach's often seething interjections. In this respect, "Left for Dead" bears less resemblance to the standard climbing memoir than it does to "Cleaving," Dennis and Vicki Covington's soul-stripping marital memoir of last year -- "'Cleaving' with crampons!" a publicist somewhere may have already chirped.

This isn't, by nature, uninteresting stuff; anyone who has ever had to sit across the dinner table from a spouse trying to stammer out why climbing some volcano in South America is a perfectly reasonable notion will find much to relate to here. (Bruce Barcott, for one, plumbed the subject beautifully in a profile of late climber Alex Lowe last spring in Outside.) Nonetheless, there's a flatness here: Peach nags, Beck whines, their friends analyze -- and the reader feels icky. Passages like the following might better have remained in the bedroom:

Peach: I think he was looking for a way to ditch all of us.

Peach: You said you were depressed, and that it was my fault.

And so on, often embarrassingly. It's like listening to an acquaintance's parents bickering far too openly in front of you. The writing of this book was probably excellent therapy for Mr. and Mrs. Weathers. Reading it, however, felt like sucking in too much thin air.