Zen and the art of start-ups

A Silicon Valley rebel gets spiritual about making money in "The Monk and the Riddle." 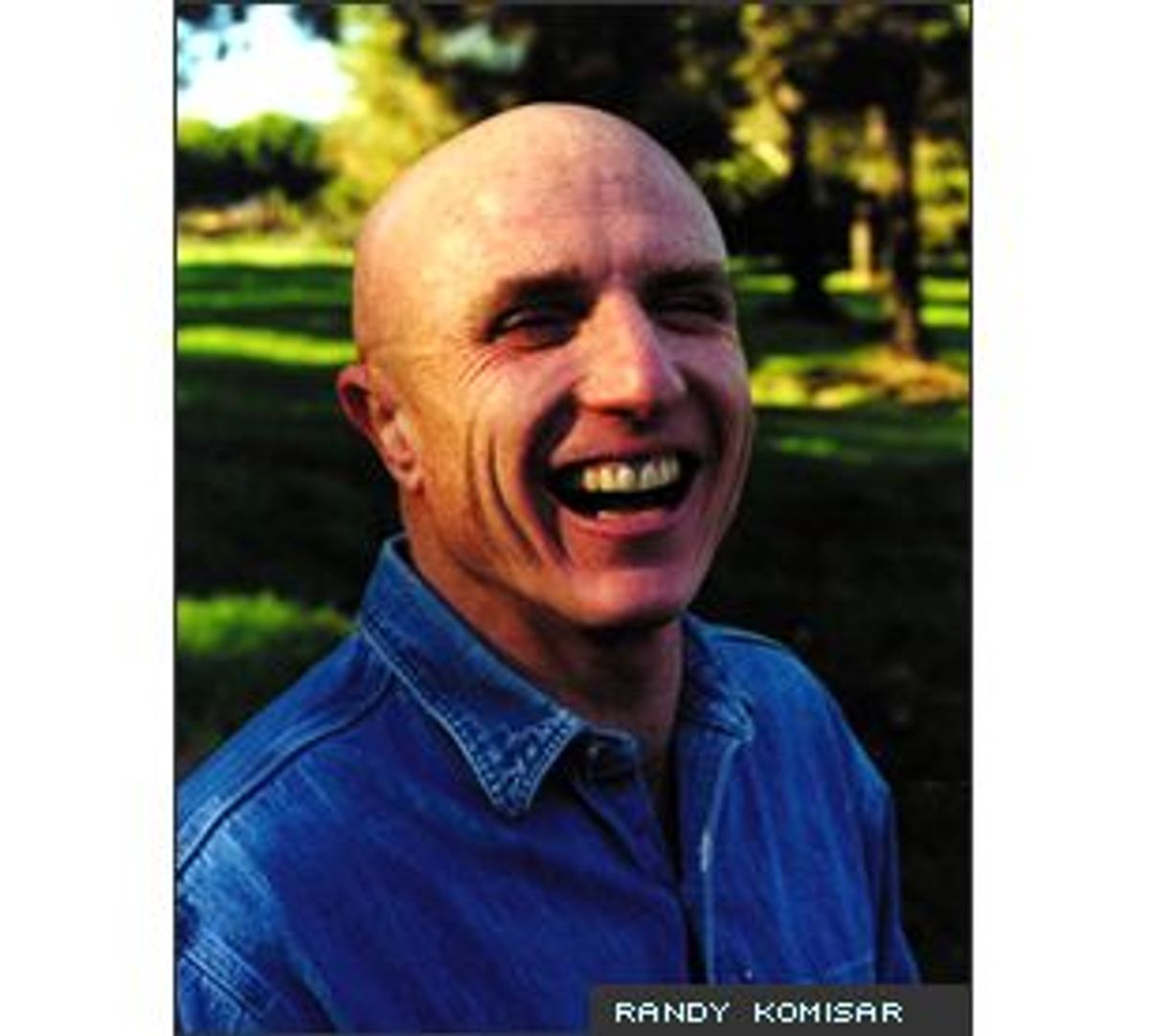 The pitch: "The Internet's changing the way people live, and it will change the way people die."
The play: Funerals.com.
The big idea: "We're going to put the fun back into funerals."
The hype: "The Amazon.com of the funeral business."
The burning need: "Research reveals that people think funeral homes are creepy places."
The target market: Everyone. "In the end, everybody has to die sometime."

No, this is not a glimpse of an actual plan for a dot-com casket company. But in the current mania for getting rich quick online it could be. The Funerals.com pitch is part of the deliciously vicious sendup of Silicon Valley greed run amok in "The Monk and the Riddle: The Education of a Silicon Valley Entrepreneur," a self-help-cum-business fable by valley veteran Randy Komisar.

In a book brief enough to suit the media diet of even the most information-overloaded Net exec, Komisar uses the fictional tale of a clueless wannabe entrepreneur, Lenny, and his morbidly avaricious "big idea," Funerals.com, to illustrate what's wrong with many of the current crop of dot-com start-ups and what it would take to fix them. His remedy is nothing as simple as a tweaked business model or even a new management team. It's a wholesale change of heart.

"What would it take for you to spend the rest of your life on Funerals.com?" queries the sage Komisar. The baffled Lenny intends to spend no more than a few years on Funerals.com before enjoying a nice fat liquidity event. Then he'll get on to whatever he wants to spend the rest of his life doing, thank you very much. Komisar argues that it's just this attitude that condemns most start-up ideas to mediocrity, and eventual failure.

"The Monk and the Riddle" is Komisar's "Zen and the Art of Motorcycle Maintenance" for the dot-com set, complete with a revealing motorcycle ride through Burma (now Myanmar), where the seeker (Komisar) encounters an enigmatic monk with a riddle that will conveniently unlock the key to a life well lived back in Silicon Valley.

Of course, most spoilers who chastise Silicon Valley for its rampant greed are taken about as seriously by the people who actually work there as a random individual investor demanding to get in on a $100 million venture capital round. Uh, yeah. Whatever. Back to work.

But Komisar's one of them. He has worked closely with companies like WebTV and TiVo in a "strategic" capacity, without ever taking on a full-time management position, getting paid in equity. His funky job title: "Virtual CEO." And he has the belly-of-the-beast start-up experience to play this unusual role of insider who remains outside; he has been CEO of LucasArts Entertainment, CEO of Crystal Dynamics, a gaming company, CFO of GO.com and a founder of Claris. Translation: Komisar didn't just move to the valley six months ago with dollar signs in his eyes.

Bonus: Komisar has a shaved head, wears cowboy boots and rides a motorcycle. No boring khakis here. Did I mention he meditates daily? And unless you're already in his extended network, he doesn't even want to know you. His phone number is unlisted: "If you don't know someone I know, you can't find me," he boasts in "The Monk and the Riddle."

In short, the author is the poster child for the Silicon Valley businessman as rebel, the start-ups' wise man, who refuses to be pinned down to any one company. He's the kind of only-in-Silicon Valley character who makes the media go into spasms proclaiming the dawn of a New Economy and the birth of the Brave New Capitalist.

As an author, Komisar has the valley insider's cred to actually have his message heard by the exact kind of wildly driven, but misguided, slickie slicks who need it. So it's too bad, then, that the advice he offers can best be described as "Do what you love, the money will follow." His antidote to the pervasive cash-out mentality is not nearly as captivating as his bitingly accurate portrayal of the problem. He nails the entrepreneur as pitchman on hyper-overdrive, right down to the mechanistic inability to deviate from his script.

Clearly, Komisar has sat through one too many painful pitches. After suffering through the dog-and-pony show for yet another start-up promising to revolutionize the pet food industry, Komisar sniffs that not one of these "pet shop boys" actually owned anything furry or feathered. "All I saw in this pitch was greed," Komisar scolds. "I had begun to find aspects of the start-up game increasingly disturbing. Expedience ruled. Sometimes I wondered if rather than developing tomorrow's business leaders and talent, we weren't merely cloning speculators, hack business men and women, who arbitraged their drive for a quick hit and who believed that if you're rich, you're right."

Interweaving anecdotes from his own career and Lenny's search for funding, Komisar warns that too many of the entrepreneurs who are in it for the money are operating according to what he calls the "Deferred Life Plan," which, he says, dominates Silicon Valley. It goes something like this: "Step one: Do what you have to do. Then eventually -- Step two: Do what you want to do." He sees it as nothing short of a prescription for an unfulfilling life: "In the Deferred Life Plan there will always be another prize to covet, another distraction, a new hunger to sate. You will forever come up short," he warns. "I've learned from my own experiences that the deferred life is just a bad bet."

The obvious problem with working to get rich now and to enjoy something more meaningful, or at least more fun, later, as Komisar -- that party pooper -- points out, is that you may never get to Step 2. Carpe diem. Most start-ups never get funded, he reminds us, and of those that do, most fail. So if your only motivation for playing the start-up game is "casino economics," it's a real crapshoot.

"It bothered me to see talented young people give up, or defer, their ideals in the hope of a fast buck that was unlikely to ever arrive," Komisar frets. The message: If you're starting a company, do something that matters to you, or don't bother. "I can't get excited about a business whose biggest idea is making money," Komisar says in snubbing the feckless funeral entrepreneur.

It's a little hard to accept this bit of tough love from a guy like Komisar, who, as he makes abundantly clear throughout the book, has so obviously made it big in Silicon Valley. It's almost like he's saying, "The odds of you becoming me are not in your favor, so just do something you love, OK, kid?" Komisar's straw man for the Deferred Life Plan is Lenny's dad, Jack Dolan, who spent 40 years working as a bureaucrat, and only fully indulged his true love -- gardening -- for less than a year before he died. Maybe Komisar doesn't realize just how dated that version of deferral sounds.

Sure, in the old economy you had to slave away for decades to get the gold watch and pension, but -- unless the NASDAQ really bottoms out -- it's not unreasonable to think the Deferred Life Plan might set you back only a few New Economy years. Of course, no one's going to argue that Komisar is wrong and that, actually, it's a fabulous idea to put life on hold while one makes money. But his argument would be more compelling if he didn't paint the start-up process in such simplistic black and white -- as motivated solely by greed or solely by zeal.

And what if your great life passion should run to something utterly outside the realm of the millionaire-minting Net economy, like painting, say, or writing racy sonnets, or gardening (like Dolan)? Would it be worth betting on a start-up for a couple of years (these days start-ups offer beefy salaries, not just piles of stock options) on the off chance that it would give you the financial tools to create a less lucrative business that you'd love? That's a place Komisar simply doesn't go.

But "The Monk and the Riddle" isn't just one more squishy invitation to find work that's your passion, although it certainly embraces that pursuit. The book also cleverly hints that doing so is the true road to riches. Indeed, no one will get remotely interested in that poor stooge Lenny's Funerals.com scheme until he and his partner reconnect with their original heartfelt mission: helping the dying and their families. Then, a key venture capitalist just might take a second look. Wink, wink.

There's a similar message in the trajectory of Komisar's own career, from stifled, straight-and-narrow lawyer to freewheeling Silicon Valley player. Throughout the book, we catch glimpses of him enjoying the kind of wealth that those greedy dot-com entrepreneurs covet, right down to a Napa Valley sauvignon blanc drunk outside at sunset, a gentle nudging reminder of the financial rewards of following one's passions.

Maybe the lesson of "The Monk and the Riddle" is that following your true passions may also conveniently lead to that pot of gold. Now there's advice that eager entrepreneurs will rush to take in droves.