In the unimpressive wake of "The Beach," a local director releases quite a different take on life in Thailand. 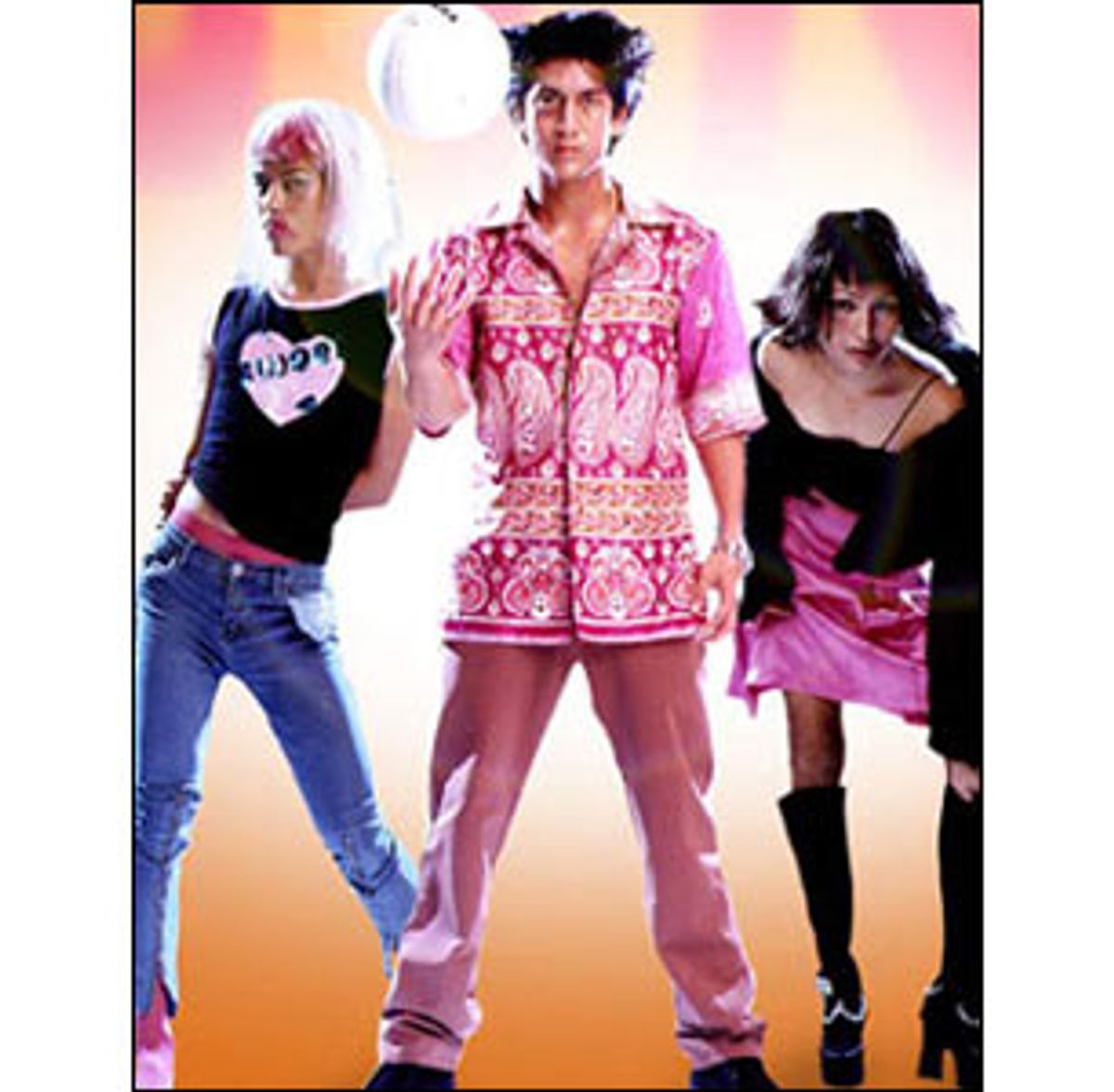 Before the feature presentation begins at any movie theater in Thailand, there comes a solemn moment when the previews and advertisements go dark, and a silent message appears on the screen inviting all present to "Please pay respect to His Majesty the King." Audience members rise from their seats as the soothing harmonies of the Thai royal anthem fill the room, accompanied by a brief pictorial tribute to the nation's beloved 72-year-old monarch.

This time-honored ritual, a sweetly reverential act repeated hundreds of times a day at theaters throughout the kingdom, is part of what makes going to the movies one of Bangkok's great little unsung pleasures -- particularly at the newer cinemas, which offer efficient computerized booking systems (no need to queue up for good seats), up-to-date sound and projection equipment and the singular option of choosing dried squid treats instead of popcorn at the lobby snack bar.

With tickets selling for only about $3 at the city's impressive inventory of modern multiplexes, Bangkok would be a true paradise for cinephiles were it not for an unfortunate dearth of good pictures rolling through all those high-fidelity projectors. At almost any given time, a handful of mediocre Hollywood blockbusters monopolizes the local listings, consistently favoring the kind of shallow comedies and action-packed thrillers that lose nothing in translation. But so appealing are the movie houses themselves, my wife and I routinely scan the new releases for a convincing excuse to spend an evening at the cinema, frequently settling for titles we hope will be at least mildly entertaining if not especially memorable.

It was in this spirit that we attended a screening last March of "The Beach," starring Earth Day 2000 poster boy Leonardo DiCaprio. The film adaptation of Alex Garland's dark novel was just out in Thailand, but reviewers in the States had been badmouthing it for weeks, so we arrived at the theater with decidedly low expectations and were not the least bit disappointed.

Squirming through the ponderous tale of an island Utopia gone seriously awry, I wondered how the Thais in the audience must feel seeing their culture reduced to such incidental, two-dimensional characters: The weird old witch of a chambermaid, the sneering snake blood salesman, the heartless police detective, the sadistic posse of backwoods dope farmers with fingers ever twitching on the triggers of their automatic weapons.

Then it dawned on me that my own culture wasn't faring so well either, represented in the film by an impetuous and self-indulgent American backpacker who goes hog wild in the tropics after running away from home in pursuit of an escapist adolescent fantasy.

Despite director Danny Boyle's best efforts to make us like DiCaprio, the most heroic figure in "The Beach" strangely turns out to be the chief marijuana grower, played with convincing edginess and pragmatism by Abhijati "Meuk" Jusakul. When the final confrontation between farmers and foreigners brings the story to a long overdue climax, Jusakul delivers the film's most gripping moment -- and only example of subtle character development -- as he works out a harsh but eminently sensible resolution to the conflict that doesn't involve blowing the whole lot of pathetic farang kids to kingdom come.

More intriguing than the movie itself is the ongoing debate about the real beach at Maya Bay on the island of Phi Phi Leh, where much of the filming took place. Protesters picketing outside the Bangkok premiere called for a general boycott of "The Beach" on the grounds that location work for the film -- which involved bulldozing sand dunes and planting a temporary grove of coconut palms -- had caused irreparable damage to a sensitive littoral ecosystem within Thailand's Koh Phi Phi Had Nopparat Thara Marine National Park. Twentieth Century Fox, which obtained a permit to use the site, contends that its crew left the beach in better condition than when it arrived, removing the imported palm trees, restoring the dunes and hauling away tons of previously accumulated flotsam and jetsam.

Of course, many of Thailand's ostensibly protected wilderness areas (including Phi Phi Leh) have been seriously harmed without the intervention of Hollywood film crews, and I see no reason to doubt the sincerity of Fox's efforts to clean up after itself. But during a recent conversation with American environmental crusader Thom Henley, author of two nature guides to southern Thailand, I began to see an implicit double standard in the trumpeting of trash removal and habitat restoration as justification for reshaping the beach at Maya Bay.

Henley placed the debate in a broader context for me by posing the rhetorical question, "Would Fox have been able to get away with this on parkland in the United States?" Of course not. Imagine a Hollywood film company petitioning the National Park Service for permission to cut trees in Yosemite Valley, or plug up Old Faithful, or give George Washington's face a nose job on Mount Rushmore. The American public simply wouldn't support it, no matter how much restoration work was stipulated in the deal.

The same week "The Beach" opened in Bangkok, another new film set in Thailand arrived in local cinemas, a strictly homegrown production called "Satreelex," or in English, "Iron Ladies." Like "The Beach," "Satreelex" follows the exploits of an idealistic band of young adults whose dogged pursuit of an alternative lifestyle leads to passionate and sometimes violent conflicts with one another and with various elements of Thai society.

In this case, however, the protagonists belong to an endearing squad of gay and transgender volleyball players loosely modeled after a real team from Lampang (near Chiang Mai) that won the Thai men's national volleyball championship in 1996.

Part "Karate Kid" and part "La Cage aux Folles," this playful puppy dog of a film begins when the new coach of the Lampang provincial team -- a bighearted middle-aged tomboy whose own sexuality is frequently called into question -- invites two homosexual men to try out for the team. After all but one of their straight teammates quit the court in disgust, the gay boys enlist some old friends to fill out the squad, and the remainder of the movie follows their predictably rocky but often hilarious road to victory.

While "Satreelex" indulges in the most coarse comedic stereotyping -- limp wrists, swishy walks, hysterical sobbing over a broken fingernail -- it also makes a somewhat serious attempt to shed light on day-to-day social dilemmas faced by the range of gay, transvestite, bisexual and transexual men collectively (and rather impolitely) referred to in Thailand as katoey.

One closeted teammate, Wit, shocks his conservative parents and unsuspecting fiancie when they learn he has joined the notorious team. Nong, the gentle giant, struggles to reconcile his dainty and feminine personality with a big, masculine body. The effusive, flaming Jung tries in vain to win the affections of the straight men he desires. And Pia, the most physically feminine of the bunch, mourns the loss of a former boyfriend now in the arms of a lover whose breasts are not fake. And through it all, the team's heterosexual captain, Chai, learns firsthand what it's like to be the odd man out. Surprisingly, only one of the gay characters is played by a real-life katoey (Kokkorn Benjatikul as Pia), but the straight actors cast in the other principal rolls pull no punches, and their exuberant, uninhibited performances carry the film through its more heavy-handed moments.

When I asked one Thai friend his opinion of "Satreelex," he told me that although he enjoyed some aspects of the film, he was concerned that it might give foreigners the wrong impression if it gets distributed overseas. "They might think Thailand is an open country with freedom in this way of life -- that all people do accept gay life in our society," he explained. "Just take Jung and his parents as an example," he said, referring to a character whose mother and father lovingly embrace their son's sexual orientation. "When farangs look at this family, they probably think Thai parents do accept their gay kids, but it's not always true -- believe me."

In a subsequent discussion, my friend was even more critical of the film, describing it as "freak comedy." "People pay money because they want to see katoey in the film for a laugh -- but when they get out to the real world, some of them still don't accept it."

On the other hand, if all you knew about Thailand was what you'd seen in mainstream Western movies -- Yul Brynner singing jolly tunes as King Mongkut, James Bond racing among the craggy isles of Phang Nga Bay, Emanuelle humping her way through Bangkok or DiCaprio losing his marbles in the jungle -- your view of the kingdom would bear far less resemblance to Thai reality. And in any case, "Satreelex" is plainly meant to be more didactic than realistic.

In the fictional Thailand of first-time director Yongyoot Thongkongtoon (trained in the punchy, sentimental art of television advertising), you can't swing a cat without hitting a katoey, and every time an unsympathetic character makes a homophobic remark, some innocent bystander (who happens to be gay) takes offense and takes the bigot to task. The message in this oft-repeated gag is clear: Gays are everywhere, and any unkind comments you make about them in public can and will be used against you.

In a domestic movie market dominated by foreign imports, "Satreelex" has done surprisingly well at the box office here, earning 100 million bahts (about $2.65 million) in its first four weeks -- already enough to rank it among the top-grossing films in the history of Thai cinema. Despite some uneven acting and obvious technical faults, this fun, feel-good comedy has all the makings of an enduring camp classic along the lines of "The Rocky Horror Picture Show" or John Waters' "Pink Flamingos," in which case it stands to make even more money overseas.

I predict that when long-neglected copies of "The Beach" are collecting dust on the shelves of your local video store, "Satreelex" will live on in midnight screenings at repertory cinemas and college campuses throughout the land, attended by bands of costumed revelers merrily (if not gaily) decked out as their favorite Iron Lady. You heard it here first.

Morris Dye is a writer and editor who lives in Bangkok.