The Dixie Chicks, TV Guide and me 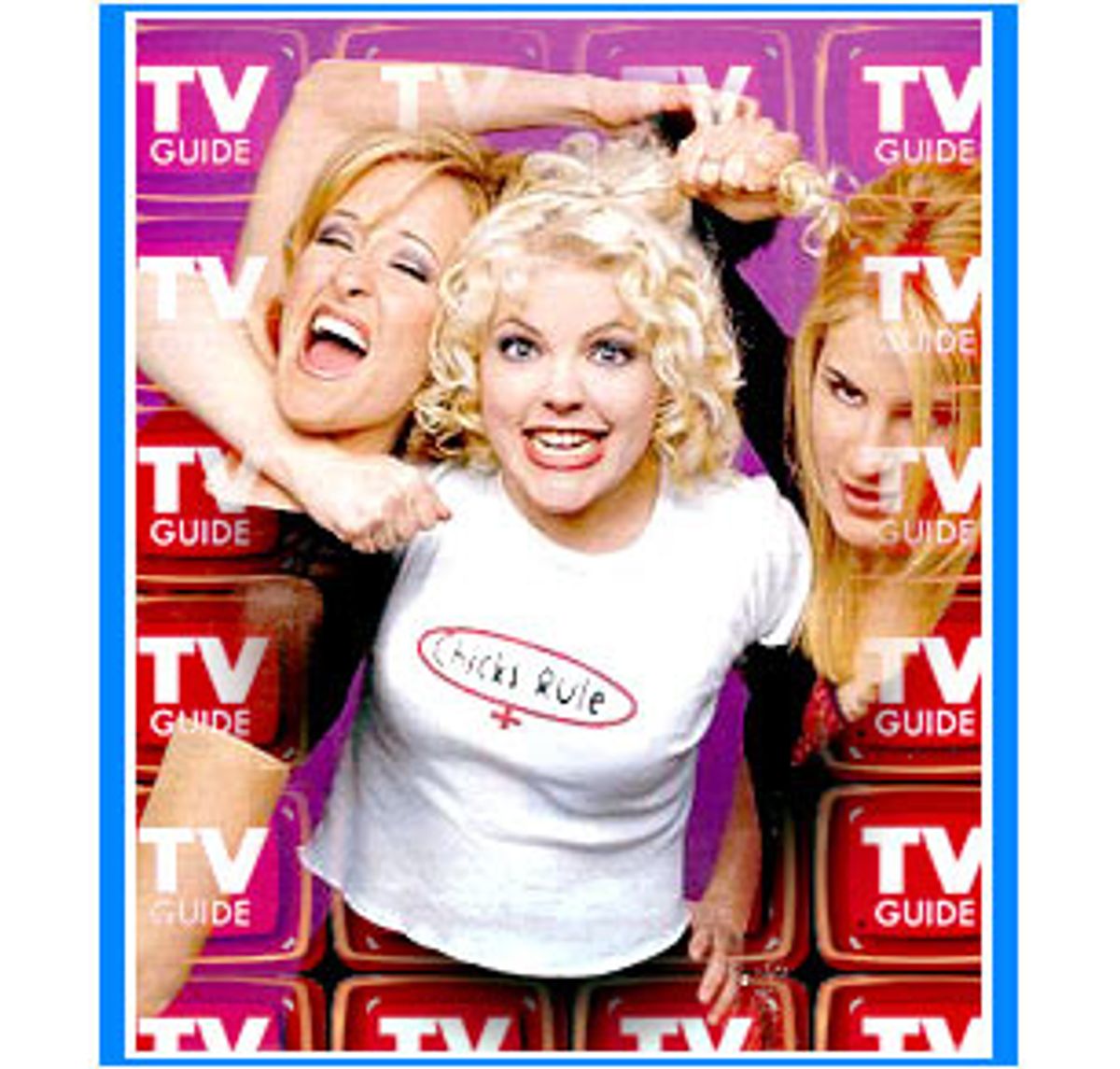 The other day I was staying in a nice hotel. When I was poking around the room, looking at room-service menus and the little shampoo bottles and the like, I came across a small, leather-bound folder on the bedside table. And inside this sober folder was this: Under the words "dixie chicks" in orange and pink lowercase letters was a photo of the country-pop trio -- smiling bleached blonds in pink and orange, one of them contorted like a circus acrobat with her legs in the air.

They were on the cover of TV Guide, which promised "Men, Money and (Sing It) 'Goodbye Earl'! The Sassy Country Trio Gets Down to Serious Girl Talk." Looking around at the room's mahogany and marble, it made sense that such a trashy cover of such a trashy magazine had to be hidden in such an elegant setting.

Something about the room said, "I only watch PBS." The room said that; I said to myself, Haven't gotten this issue yet, and plopped down in a wing chair to read about the band I love to hate. (Well, first I looked in the movie listings, as I do every week, to see if "The Man With the Golden Arm" would be playing, but it never is. In the March 11 issue, however, it was 28-down in the magazine's crossword puzzle, "Man With the Golden ___.") As for the Dixie Chicks, what is more fun than reading a Q&A with singers you don't like talking about their early years, in which they were paid $100 to sing Bette Midler's "The Rose" at an open-casket funeral to banjo accompaniment?

TV Guide is a weakness of mine. I drop everything when it comes in the mail. Partly because TV Guide and I are in the same business, and that is the business of noticing things. Just as I was thinking about how the character of Spike has blossomed on "Buffy the Vampire Slayer," TV Guide critic Matt Roush wrote just such an item. I have a thing for character actors and so does the magazine. I had no idea that two of my favorites of the current season -- Jane Kaczmarek as the mom on "Malcolm in the Middle" and Bradley Whitford as Josh Lyman on "The West Wing" -- were married until TV Guide did an item on their late-breaking, dual success. And, though one doesn't really read this pulp pile for the writing, it does contain the occasional fine, funny piece by -- how'd he get here? -- Joe Queenan.

Queenan's sidebar to the April 15 episode's guide to children's television, in which he writes about watching "Angel" and hockey with his children, hints at how parents might make watching TV alongside their kids an educational experience. "When my son asks me if 'Angel' is historically accurate in its portrayal of young Angel as an 18th century Irish vampire," he wrote, "I inform him that vampires traditionally come from Eastern Europe and not Ireland, because real-life monsters would never be taken seriously if they spoke with a brogue. Similarly, when my daughter asks what the qualifications are for a position as an NHL referee, I remind her that the official job application is written in Braille. It's nice to be able to contribute."

TV Guide might be the weirdest magazine in America, and thus the periodical providing the most accurate representation of American life. Its strangeness derives mostly from its schizophrenia. It is utterly rosy and dumb, except when it's being perceptive and harsh.

For example, in the same issue as the mindless Dixie Chicks interview is the prickly Susan Stewart's "Hits & Misses" column. She writes about a Romance Channel documentary devoted to women and shoes that makes the shaky semiotic claim that "Shoes are 'a downward displacement of breasts.'" Stewart also points out, referring to Jane Seymour's biopic turn as abolitionist Fanny Kemble, "The fact that slavery was bad doesn't mean every movie that criticizes it is good." She gives it a score of two out of 10.

The magazine's bright, often idiotic covers -- probably the main reason the hotel's management felt the need to hide it behind leather -- give the reader the impression that it covers TV with unconditional love. But one of the nice things about TV Guide is how mean it often is.

The identity of TV Guide might be summed up by the name of its most beloved feature: "Cheers & Jeers." This section often cheers the moments I myself have loved -- the real sentiment when David Letterman brought his medical team and nurses onstage to thank them, the fine recent work of "Nightline" in Russia. (Did you see Ted Koppel with the gay kids in the disco?)

The jeers, though -- there isn't a pompous blowhard in this country they'll spare. Recent targets include the "Antiques Roadshow" appraiser who faked a sword segment; the length of the Academy Awards ("Jeers to four hours and eight minutes of anything"); Whitney Houston's lame attempt to dub her husband Bobby Brown as "the original R&B king" at both the Grammies and the Soul Train Awards; and, my personal recent favorite, Alex Trebek. In an item marked "Jeers to know-it-alls" the magazine chided the "Jeopardy!" host for patronizing the host and contestants of "Who Wants to Be a Millionaire." After Regis Philbin (who, Trebek pointed out, came in last on his two appearances on "Celebrity Jeopardy!") invited Trebek to be a "Millionaire" contestant, Trebek said no. "Cheers & Jeers" lives for such anecdotes of poor sportsmanship.

They even cheer representations of jeering. For example, in the April 15 issue they loved the "Inside TVLand" special on "The Andy Griffith Show," which brought to light the fact that the actress who played Aunt Bee hated Andy Griffith.

I think I love TV Guide because its pages mimic the experience of watching TV: crap, crap, crap, swoon. I don't know what TV Guide would call the previous sentence. Cheer within a jeer? Or jeer within a cheer? It doesn't matter. This is television -- can't have one without the other.