I have seen the future: It's Tenacious D

If watching these two short, fat, weird guys perform doesn't make you happier than you've been in years, you're withered and dead within. 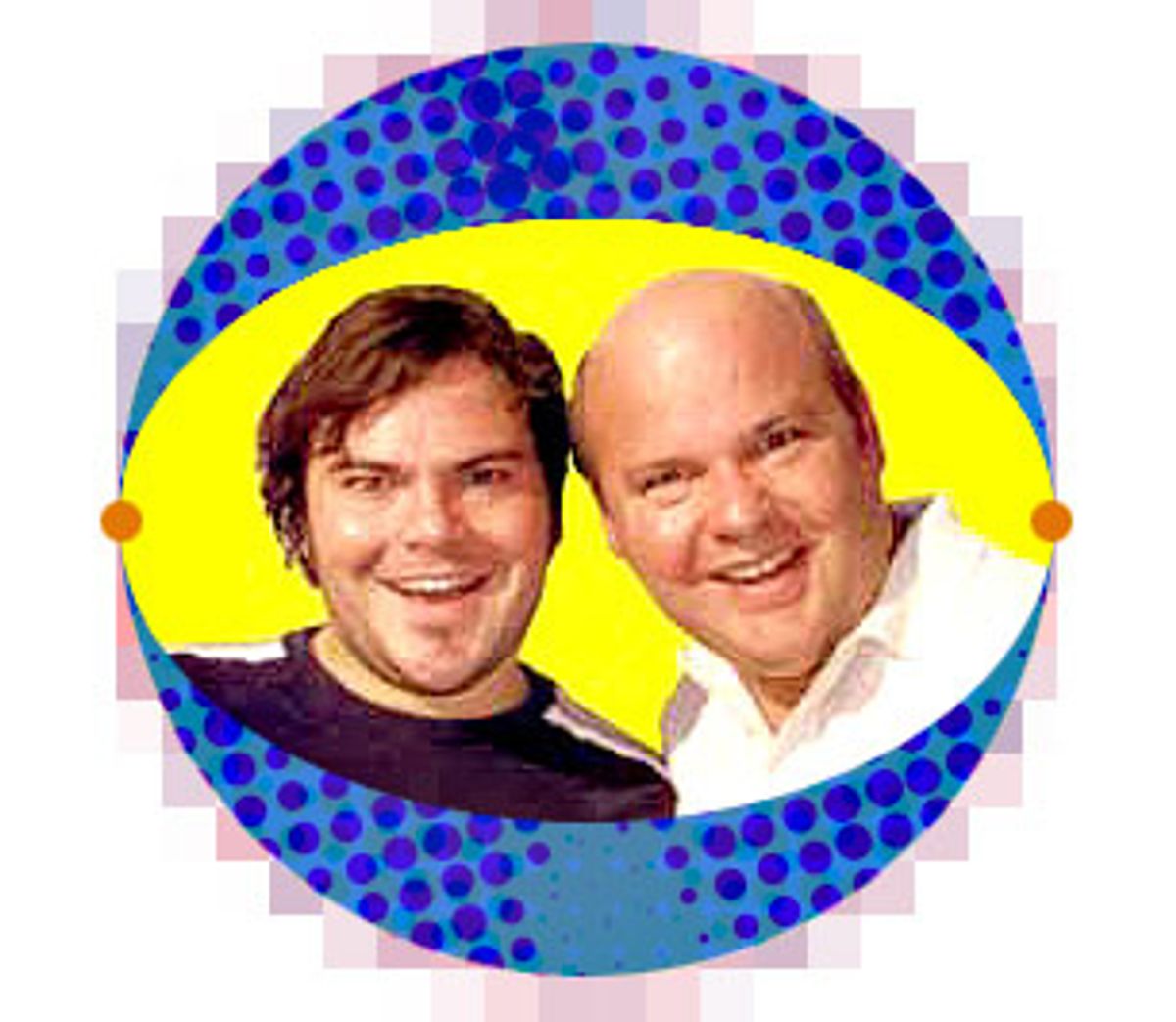 I had a dream the other night in which I was the passenger in a big, new,
powder-yellow, heyday-of-Detroit mobile. All the chrome was there, the beige
leather interior was intact and I was being driven through a suburban town on a
hot late-1950s day in the Deep South. The driver was a young, handsome Dr. Martin
Luther King Jr.

It was clear by the friendly, ticklish vibrations in the front seat that I was
his latest blond daytime dalliance (I, in the decade-less logic of dreams, was
not from the 1950s, but was staring out the window tripping on the vintage
sidewalk scene in my 19-year-old post-punk persona -- platinum blond, tight black
jeans, pointy black boots, CRASS T-shirt.)

Dr. King and I pulled into a lot behind a one-story motel in a glade of drooping
green trees. "Is this gonna be all right?" I asked. (Translation: Is it safe for
you to check in here with a white chick?) "Oh yeah, baby, we're all right. We're
on the wrong side of the tracks, now," he said jovially, meaning: I can do
whatever I want here; we're in the black neighborhood.

Then the scene switched and the good doctor was wearing a loud pair of Hawaiian-print Bermuda shorts and a terry-cloth beach shirt and a nice straw fedora. He was
watering the lawn outside of the motel and I was hanging around girlishly -- we
had a very friendly, flirty rapport. He was young and fit and sexy -- I touched
him on the stomach and he had washboard abs. The best thing about the dream was
the elated flush of hanging around in the joyous, inspiring aura of a truly Great
Man.

Which is how everyone in the audience felt at the Bowery Ballroom April 18 and
19, when rock-comedy tyrants Tenacious D took the stage and rocked the fucking
house two times with the pungent Rocket Sauce of Unadulterated Genius.

"Rocket Sauce!" the overweight frat boys in the audience screamed all
through the opening act, a painfully mediocre sketch, a comedy abortion and perhaps
the unluckiest opening act in history. The people knew "The D" were in the
building; they could smell The Sauce, and they wanted the D and nothing else.
This is unsurprising. Tenacious D -- the round boys from L.A., Jack Black and Kyle
Gass -- have recently carved their names on the forehead of Goddess Fame with
solid-gold steak knives.

Jack Black is literally the most unobstructed fire hose of white-hot mega-talent I
have ever known or seen. He's just thrashed that huge Donkey Kong of a star-turn
in "High
Fidelity" as Barry, the vituperative record-store snob, and now the star
everyone always knew would rise is blowing up at frightening speeds. The
dressing room at the Bowery was full of the Cool Young Men of stage and screen --
John Cusack, Philip
Seymour Hoffman, John C. Reilly, David Cross -- all with their tongues way up
Jack's legendary crack.

Those who have known him since childhood all feel the same way about the little
fucker -- head-shaking awe. Black is an unlikely, ferocious combination of
Brando-like gravitational conviction combined with Belushian dire hilarity and
a kind of tender Seals & Crofts musical ear for the lovely harmonics, bound up
in an airtight flair for the absurd, a beautiful yodeling voice and a certain
degree of (much satirized) raw cock power. Most people have a pipeline to the
Gods of Inspirado that is somewhat occluded by the performer's neurotic inability
to get out of his own way -- not so Jack Black, who is unimpeded by vanity of
any kind, who seemingly has no psychic obstacles that prevent his continual
blasting forth of four-alarm Celestial Heat Magick.

Kyle Gass, aka K.G., aka Cage, aka Rage, aka Rage Cage, is the backbone sound of
the D, the golden 12-strings of guitar craft that pulls it together musically. He
is the acoustic metal sound. Shades of Neil Young. Shades of Zeppelin. Hefty wad
of prog. Angels and wildebeests. The Harmonizer.

It's a tough job being the guy who accompanies the walloping tsunami of
adoration that follows Black around, and K.G. seems a little bitter and
acrimonious in his between-song banter, but I suppose that's only human. In
Black's bright and collateral light must he be comforted, and not in his
privileged shoes -- it's a fucked-up world. It is the Faustian contract. But Rage
does some beautiful finger work, and gets to stand on the stage, like all the
guys whose names you can't remember in the Sex Pistols.

The D are out and nobody can pull them back into the tasty semi-obscurity in which
they once languished in dark comedy clubs and dim corners of HBO programming.

Black is a great friend of mine who I've known for years. Now the world knows him: He's been on "Conan."
Black is a good new star: gracious, diplomatic, filled with eight seconds of
high-volume friendliness for all, in a way that makes everyone feel like they've
got their warm gust of special attention. Movie star, rock star, great guy.

It's interesting to be around an almost perfectly realized human being -- the
last one I sat at a table with was Best-Surfer-In-Creation Kelly Slater. By
comparison, everyone else starts to look like a 500-piece puzzle with only 32 or
so of the border pieces locked in, whereas with the Shining Few like Black and
Slater you can see the whole picture of the cocker spaniel pups in the basket
with maybe just a yarn ball remaining to be assembled.

"Shee-it," you say in admiration. What else can you say? They've figured out a
safe way to be superhuman, a way to utilize that unexplored gray matter, some way
to stop being subject to the roller-coaster win/lose, win/lose whims of basic
humanity and rule nonstop.

The only thing in the entire Tenacious D set that gives me minor cause for alarm
is the fact that the D have always been predicated on the patent absurdity that
two weird, short, fat guys could be generators of stadium-filling cock-rock
power. Now that they are routinely selling out venues to throngs of salivating
fans, it's not so absurd anymore.

At a certain point in the show, the D exhort the audience to quit their day jobs
and "Free the Artist! In here!" Black thumps his chest for emphasis.
"After a couple of years, Kyle and I will come and inspect your progress, and we will encourage you to continue. Or, we will say
stop. And if we say stop, stop!"

This is the beginning of a song called "The Cosmic Joke," which discusses the sad
fact that many people have no talent. "I know what you're thinking," Black says
to the crowd. "You're thinking, Hey, I'll learn some power chords, gain 40
pounds and my friends think I'm funny! But no. Not everyone is born with it,
like me and K.G. Believe me, if we could hand out bags of talent at the door,
you'd all be rocking."

It was all so true that it was hard to tell if this was a piece of actual science
being dropped like a bomb on the sub-talented audience, or if the comedic
faux-egomania of the D has now been mixed so liberally with their actual worldly
success that it's a joke that's no longer a joke. In any case, it made everyone
mindful of how fucked it is that everyone can't be Jack Black.

Don't get me wrong. Joy, my friends, is the cornerstone of the D. If a Tenacious
D show doesn't make you happy like you haven't been in years, you're withered and dead within.

Make pilgrimages to the D.

You won't be able to buy a D record because they hate the music industry too much
to record one. (Another reason to love them.) You can see Jack in many roles on-screen, but the D are the home of the Black Sauce of Victory. It is exciting to
live in this time, a time of Michael Jordan and Kelly Slater and Tenacious D.

I dig heroes you can throw your panties at.