The revisionists who believe that the war was just -- and winnable -- are rewriting a history they don't understand. 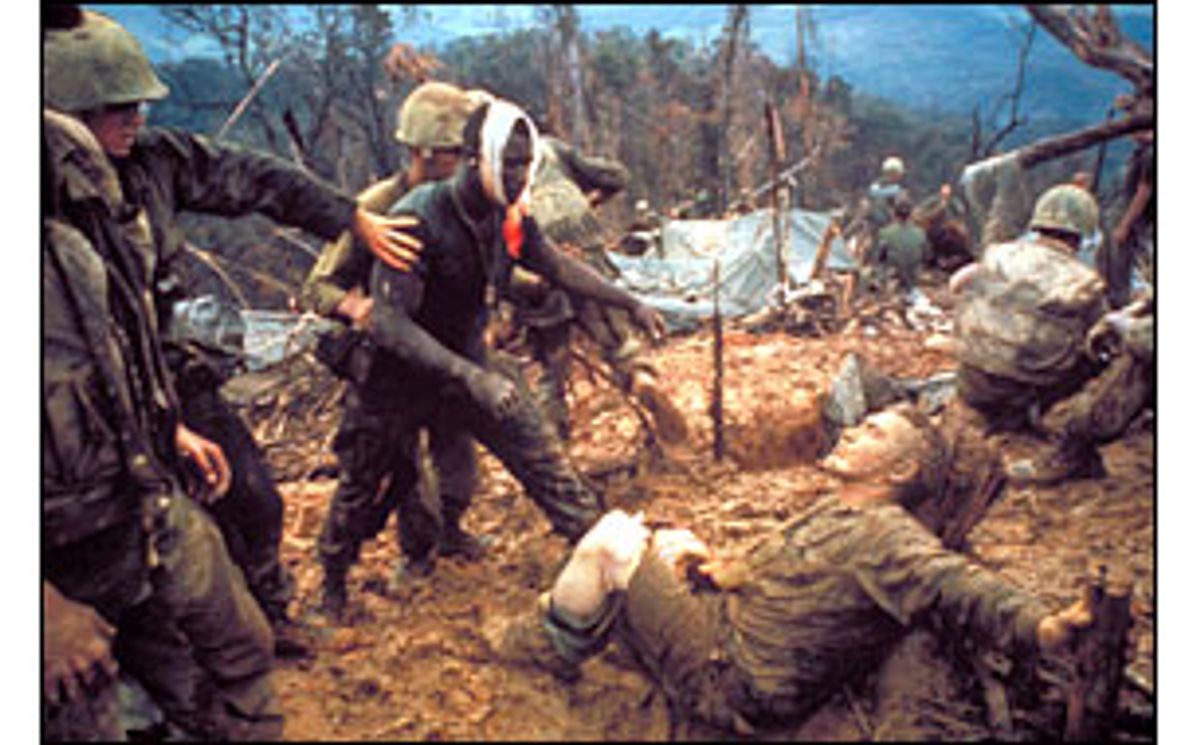 The memorial, an angle of black granite gently submerged in a slope on the Washington Mall, is starkly simple, yet it dramatizes a grim reality. Etched on its face are the names of the Americans slain in Vietnam. Heading the list are Maj. Dale R. Buis and Master Sgt. Chester M. Ovand, whose deaths have a special significance for me. I happened to be in Saigon on July 8, 1959, as Time's chief Asian correspondent when they were killed at a South Vietnamese army camp 25 miles north of the city. My account of the incident earned only three paragraphs in the magazine -- all it deserved.

Nobody could have imagined then that nearly 60,000 U.S. soldiers would die in that obscure corner of Southeast Asia. Nor, at that stage, could I have even remotely visualized that I was witnessing the opening shots of the longest war -- and first defeat -- in U.S. history.

Today, a quarter-century since its abysmal end, Vietnam still haunts Americans. Colleges offer courses on the subject, and it has been the theme of novels, poems, plays, even a Broadway musical. It continues to provoke fierce debates, as its critics denounce it as a flagrant outrage and its advocates seek to vindicate it as a noble venture. But whatever it represents, it was a tragedy of epic dimensions for the United States as well as for Vietnam, where at least 3 million people, both soldiers and civilians, lost their lives.

Vietnam has also ingrained in Americans a reluctance to become bogged down in places like Bosnia, Kosovo, Somalia and East Timor. Their prudence is shared by the nation's top military men, who have cautioned against becoming mired in "another Vietnam" -- the metaphor for an unorthodox war without clearly defined objectives or an exit formula, and in which their regiments, accustomed to conventional tactics, would be snarled in a rugged terrain of dense jungles and impregnable swamps. In an emotional mea culpa published two years ago, Robert McNamara, the secretary of defense under Presidents John F. Kennedy and Lyndon B. Johnson, wrote, "We were wrong, terribly wrong." Sen. Max Cleland of Georgia, a wounded veteran, sardonically commented that McNamara should have entitled his book "Sorry 'bout that."

Recently, in an attempt to justify the U.S. commitment, a featherweight group of neoconservative think-tankers (few of whom have any firsthand experience of either the country or the war) has begun rattling 30-year-old sabers, alleging that America broke its "word of honor" to its ally, asserting that the war could have been won and reviving the dubious domino-theory thesis that the war was necessary to halt the Soviet Union's global aspirations. This revisionist wave has been successful in landing its exponents on talk shows. It has been far less successful at convincing most experts. This is not surprising, for it has little basis in fact.

Ho Chi Minh, the Vietnamese communist leader, had been a covert Soviet agent, but he was essentially a nationalist. During World War II he organized a guerrilla force to fight against the Japanese, one of the few Asian leaders to do so; American advisors flew in to equip and train his men. Following World War II, when the French were bracing to retrieve their colony in Vietnam, he wrote to President Harry Truman pleading for help. Yet Truman and later President Dwight D. Eisenhower instead backed the French, whose hopeless cause was shattered in 1954, when Ho's ragtag band crushed French garrisons at the decisive battle of Dienbienphu.

At that juncture Ho expected to take over all of Vietnam, but he was compelled by the Russians and Chinese (who were seeking to improve relations with Europe) to accept a country partitioned into northern and southern zones. As Pham Van Dong, the North Vietnamese prime minister, confided to me in l98l, "We were betrayed by our own comrades." An election was scheduled to take place in 1956 to determine the nation's fate, but the South Vietnamese government reneged when it became clear that the communists were going to win. Frustrated, Ho Chi Minh turned to insurgency.

Yet Ho was never, as the current crop of revisionists insists, a pawn of communist masters. In August 1945, when Ho declared independence, he read the American Declaration of Independence in front of the Hanoi opera house. Earlier, when he formed a provisional government in the jungle in 1950, he asked for recognition from Marshal Tito -- whose nonaligned stance in Yugoslavia made him Stalin's enemy No. 1. This was not the action of a man controlled by Moscow. As for China, its relationship with Vietnam could best be described as one of mutual hatred. The notion that the North Vietnamese communists ever advanced a Chinese agenda is preposterous.

The United States put its weight behind an anti-communist regime in the South headed by Ngo Dinh Diem, but Diem could not cope with the growing Viet Cong insurgency and in 1963 he was murdered in a coup by his senior officers. Though Kennedy approved the coup, he was stunned by the assassination. Despite much conjecture, there is no evidence that Kennedy would have withdrawn from Vietnam had he been reelected in 1964.

Johnson, like Kennedy, believed in the domino theory, which held that if the communists took over Vietnam, the rest of Southeast Asia would fall. And not just Southeast Asia: If the Viet Cong triumphed, LBJ notoriously said, "we'd end up fighting on the beaches of Waikiki." Richard Nixon, who succeeded him as president, echoed this claim with his famous statement that if the United States did not hold the line, it would end up "a pitiful, helpless giant."

These fears did not come true -- nor is there any proof that the war had much effect one way or the other on the region's eventual embracing of capitalism. The Vietnamese did attempt to exercise control over Laos and Cambodia, neighboring nations that had been part of French Indochina. Laos was vital to the Viet Cong because the Ho Chi Minh Trail ran through it. They weren't as successful in Cambodia, where Prince Norodom Sihanouk, a master political juggler, relied heavily on China, which dreaded Vietnamese expansionism, to thwart them.

Despite his fear of communist expansion, Johnson was not the warmonger caricatured by cartoonists. His obsession was the Great Society, his liberal agenda. But as the situation in Vietnam deteriorated, he felt that he had to send in combat troops. By late l967, 500,000 Americans were serving there.

Their commander, Gen. William C. Westmoreland, had at his disposal the most sophisticated technology in America's arsenal -- automatic rifles, heavy artillery, supersonic planes, aircraft carriers and a panoply of spooky electronic devices. He was persuaded that, with his superior firepower, he would overwhelm the communists and crack their morale. I saw mountains of enemy corpses piled up after battles, but Westmoreland's optimism was an illusion. He was up against obdurate, resilient adversaries who refused to surrender. For them the war was a sacred crusade.

Gen. Vo Nguyen Giap, the communist commander, explained this phenomenon to me during a lengthy talk in Hanoi in 1991. As we reviewed the past, I asked how long the communists would have continued fighting. Without the slightest hesitation he thundered, "Another 10, 20, 50, maybe 100 years until victory -- regardless of cost."

So, as the war ground on and U.S. casualties steadily mounted, it became clear to Americans that the war was unwinnable, and they greeted the fall of Saigon on April 30, 1975, with a mixture of shock and relief. Defeat was a debacle, but not a disaster. The long nightmare was finally over.

Americans old enough to remember Vietnam bitterly recall the duplicity of leaders who propelled the United States deeper and deeper in the futile endeavor in Southeast Asia. Among the numerous legacies of the distaste is a pervasive distrust of politicians, a trend that was visible during the recent primary elections, when many voters deemed character to be more important than issues -- an attitude that benefited Sen. John McCain. Thus citizens are more skeptical than they have ever been -- a healthy development that could be construed as the silver lining in the stormy Vietnam experience.

Stanley Karnow, author of "Vietnam: A History," won the Pulitzer Prize in history in 1990.