"The Binding Chair" by Kathryn Harrison

Is the author's latest abused-woman fantasy -- this one set in China and France in the early decades of the 20th century -- revelatory or pornographic? 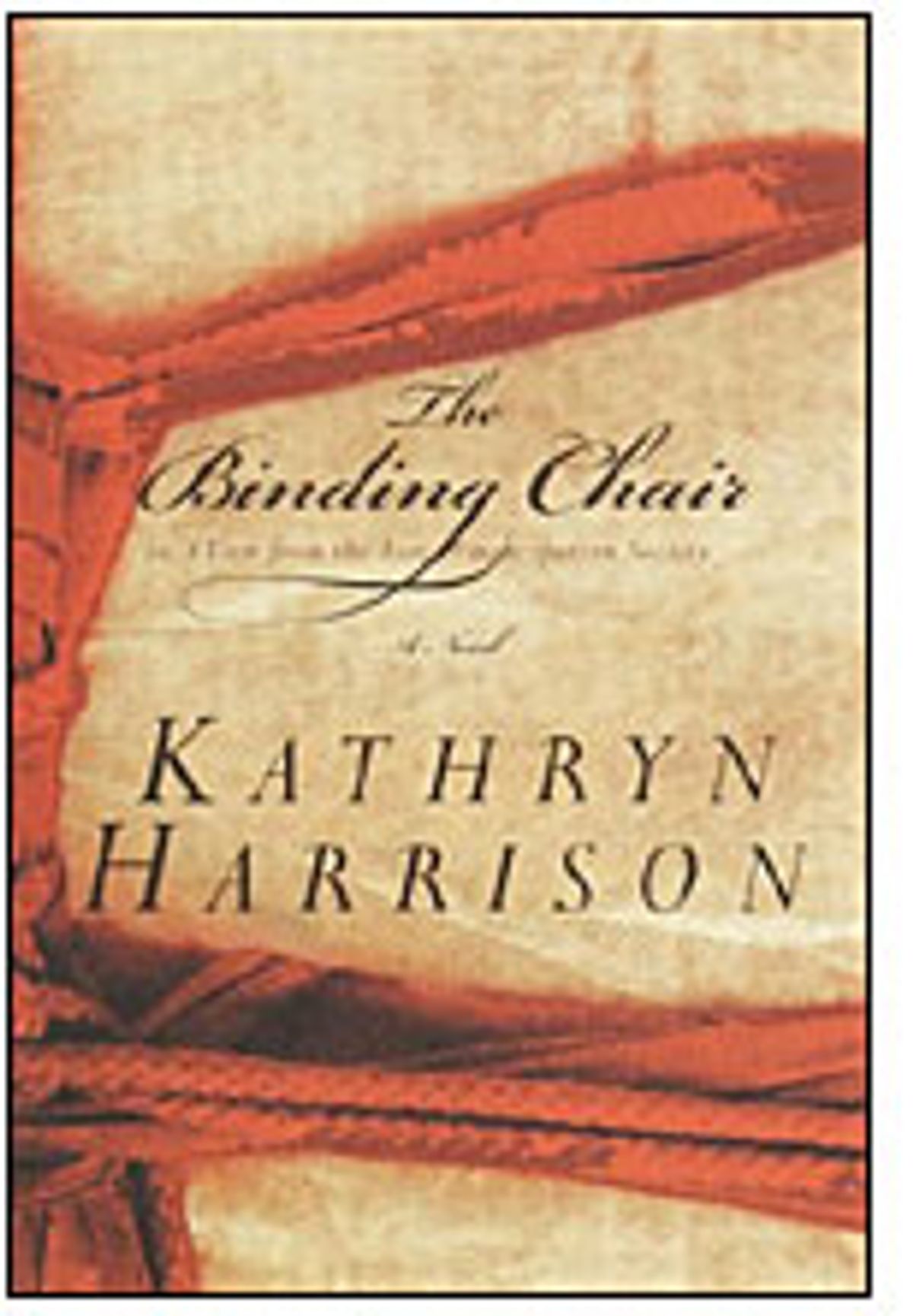 The bodies of Kathryn Harrison's heroines are well-marked maps of abuse, illness and self-destruction. Her previous novels, "Thicker than Water," "Exposure" and "Poison," as well as her eyebrow-raising memoir of father-daughter incest, "The Kiss," detail among them the physical and emotional effects of sexual child abuse, incest, rape, torture, poisoning, bulimia, breast cancer, diabetes, self-mutilation and amphetamine addiction. It's no wonder that the women in these books often feel, as Ann Rogers does in "Exposure," that they would like "to be empty, go away, disappear somehow." But a stubborn belief in the possibilities of love and ecstasy -- Harrison's heroines have a lot of pleasurable, as well as abusive, sex -- lights them through the tunnel of victimization. For the reader who doesn't share Harrison's fascination with physical extremity, though, the journey can seem less sensuous or revelatory than furtively pornographic.

Her new novel, "The Binding Chair," allows Harrison to add to her repertoire of physical cruelty the (discontinued) upper-class Chinese ritual of binding women's feet. Set in Shanghai and France, "The Binding Chair" tells the intertwined stories of two women: May, the daughter in a well-to-do Chinese family growing up in the last decades of the 19th century, and Alice, an English girl born in the first decade of the 20th. When May is 5 years old, her grandmother "sits her on a red chair decorated with characters for obedience, prosperity and longevity" and binds her feet -- a literally bone-breaking and flesh-annihilating process that Harrison describes in loving detail.

From this inauspicious beginning, May's situation worsens. Married to an abusive silk merchant at the age of 14, she runs away and supports herself in a Shanghai brothel, where she forswears everything Chinese and waits for a Western "benefactor." After seven years, he arrives in the person of a gentle, unemployable Englishman who belongs to a society dedicated to eradicating the custom of foot binding. He promptly becomes erotically obsessed with May's tiny feet, he marries her and brings her home to the Shanghai household he shares with his sister, his banker brother-in-law and his two nieces. The Chinese prostitute May thus becomes Mrs. Arthur Cohen, aunt to the strong-willed, rebellious Alice Benjamin.

Alice's story, intercut with May's in chronologically overlapping sections, begins in 1913, when she is packed off, at the age of 12, to school in England, to remove her from May's exotic influence. Traveling across the continent with her mother, sister and governess on the trans-Siberian railway, Alice demonstrates her own propensity for flight, impulsively disembarking with a melancholy Russian army captain. Brought back and delivered to her English school, she promptly involves a teacher in a minor scandal, develops scarlet fever and is rescued by May -- who has also been packed off to Europe (to break her of an opium habit) and who, carried about the streets of London in a litter by two Chinese servants, creates her own disturbance.

On returning home to Shanghai, Alice smokes opium and dallies with a local boy, while her father gets rich as a war profiteer, her mother develops an obsession with cleanliness and influenza devastates the city. After a series of reverses, May and Alice find themselves on the French Riviera, where, in the present (1927) of the novel's opening, Alice has an affair with a Russian refugee and May insists on learning to swim.

"The Binding Chair" is Harrison's second historical novel. ("Poison" is set in 17th century Spain under -- what else? -- the Inquisition.) But although Chinese resistance to Western imperialism, the Russian Revolution and World War I are all there in the background, history for Harrison is less about politics and ideology than it is about sensory detail. Setting much of the story in Shanghai -- then China's foremost port city and a center for European exploitation and trade -- allows her to assemble a canvas of subplots, scenes and minor characters to which no summary can do justice, including May's life in the brothel, a particularly grisly village execution, a lisping English governess whose poorly fitting dentures and eidetic recall of numbers contribute to the Cohen family's fortunes, and a number of dead and missing children. The Shanghai scenes in particular are vividly drawn; the narrative becomes less entertaining once the setting shifts to France. May's dark secret, revealed close to the end, is neither particularly surprising nor original.

"The Binding Chair" is certainly an entertaining novel. Harrison writes graceful and richly descriptive prose that only occasionally becomes annoying in its portentousness. ("May was five when her grandmother devoted herself to May's feet, and to her future.") It's too bad, however, that -- like Amy Tan's "The Kitchen God's Wife" -- "The Binding Chair" achieves its "exotic" effects by gleefully representing pre-20th century Chinese culture as uniformly cruel and backward, without internal logic and without dissent. And while some readers may find Harrison's matter-of-fact descriptions of the body in extremis revelatory -- even, at times, erotic -- they strike me as evidence of a sentimental attachment to fantasies of martyrdom masking itself as unflinching realism. I can't shake the unpleasant feeling that Harrison takes a certain pleasure in inflicting tortures on her characters and forcing her readers to watch.