It's a bubble, all right!

In "Irrational Exuberance," Robert Shiller credits investors' folly with keeping the bull market on its feet. 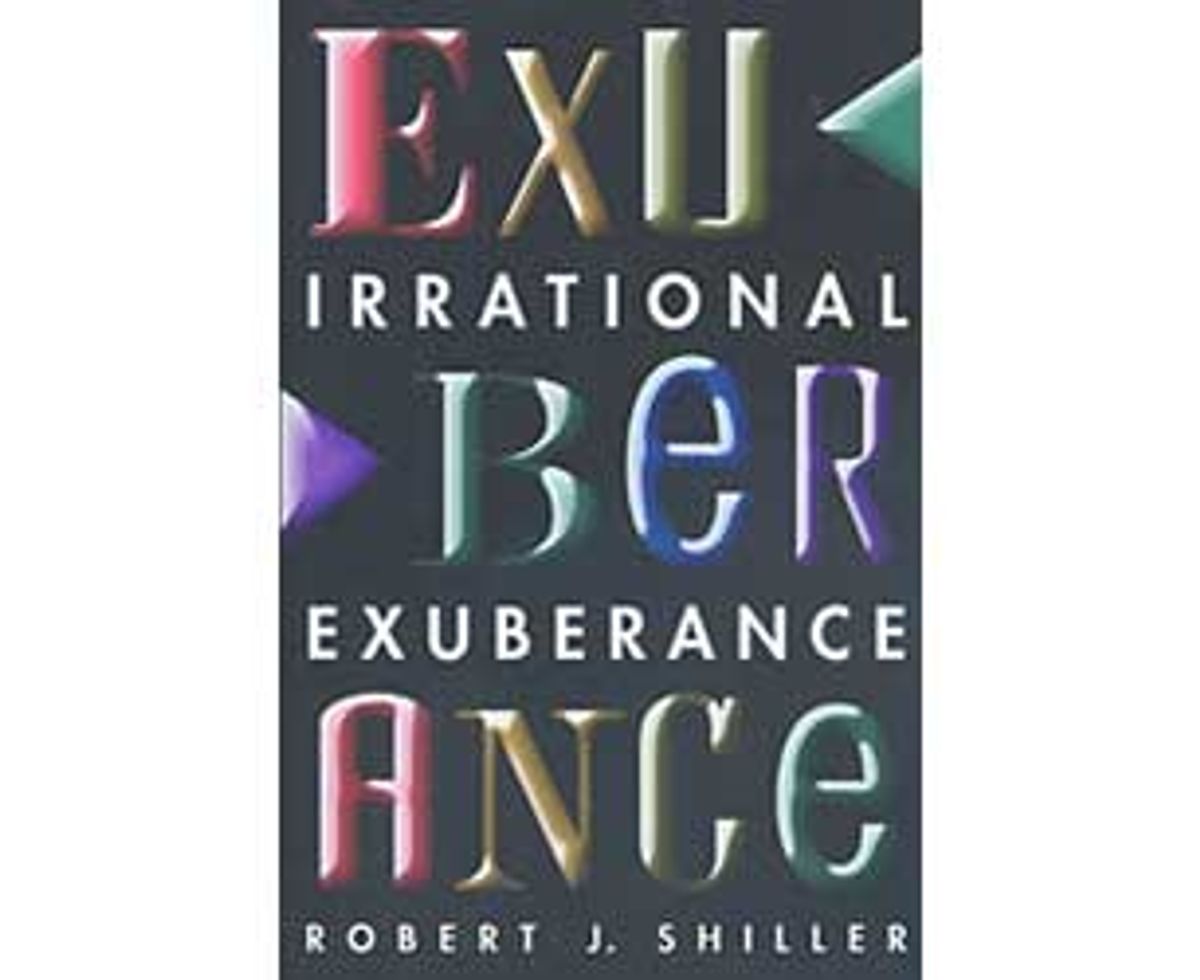 Behind the historic highs and record volatility of the U.S. stock market lurks a widespread and quite fundamental disagreement about its valuation. Are today's spastic stock prices really determined by the cold logic of an efficient market, or are they instead conjured forth from the anxious nightmares and giddy fantasies of a largely deluded investor class, one that has never known real economic hardship and has no use for historical perspective?

It seemed until recently that a new article of faith had been entered into the financial canon: that information technology in general and the Internet in particular have replaced the cycle of boom and bust with a single, terminal Long Boom. Occasional, short-term market wobbles notwithstanding, we should all invest as if the upside were a new law of physics.

Certainly the springtime swan dive of the NASDAQ seems to have germinated some fresh doubts to the contrary: What if the immutable optimism of the Information Age prophets is wrong? What if today's Way New Economy is just another version of the Same Old Story? After all, there have been world-changing technological revolutions before, and the worlds that followed were no more immune to widespread financial catastrophe. What makes us so sure it's going to be any different this time?

Robert Shillers book "Irrational Exuberance" (the title deriving from one of Federal Reserve Chairman Alan Greenspan's Dow-dampening addresses) arrives nicely coincident with these broader misgivings. A professor of economics at Yale University, Shiller has stepped into the breach with the dreaded proposition that we're in the middle of an economic anomaly of epic proportions -- in short, a bubble. He asserts that today's high stock prices -- even with April's dot-com deflation factored in -- reflect not a brave new era but rather more ancient human tendencies toward self-deception, wishful thinking and collective folly.

Classical economists continue to defend the still-largely balmy investment climate with the argument of "market efficiency": All financial prices accurately reflect all available information at all times, both "hard" (revenues, profits), and "soft" (revenue projections, prospects, competition). As you might imagine, from this premise springs a body of largely mathematical models to describe and rationalize the mechanics of this alleged efficiency.

Shiller counters, "Economists have certainly made progress in understanding financial markets, but the complexity of real life continues to prevail." He steps outside the mostly mathematical realm of economic theory and integrates a much broader range of disciplines than is usually considered in writing about the market. Finance, portfolio theory and macroeconomics only take us part the way, he declares, then turns the social sciences loose on the problem. It is primarily this consideration of human nature and the cognitive landscape that brings him to conclusions so radically divergent from the "efficient markets" school of thought. Markets, Shiller argues, can't be perfectly efficient or rational because people aren't efficient or rational.

He backs up this assertion with a litany of studies highlighting the swings and vagaries of human attention as directed toward the market: Herd behavior, or the finding that people who communicate regularly think similarly; the myth of fully independent judgment, or how people tend to cave in to the wrong answers when trumpeted by their peers; the "shocking" experiments of Stanley Milgram suggesting a universal tendency to suppose that when experts say something is right, it probably is, even if it does not seem so; the amazing human capacity to simultaneously hold conflicting beliefs with no apparent discomfort; a variety of investigations pointing to the proposition that in general, people think they know more than they do.

Shiller feeds these findings through some provocative epidemiological and anthropological models to posit a number of plausible mechanisms of speculative bubbles: "information cascades"  a kind of en-masse game of "telephone" accelerated by such modern conveniences as e-mail and chat rooms  as well as naturally occurring, Ponzi-esque feedback cycles emerging from the interplay of capital flows, investment culture and mass communications.

Shiller also brings to the table another sensibility conspicuously absent from his more quant-minded contemporaries, namely an almost Galbraithian feel for history. And just as in J.K. Galbraith's classic, "A Short History of Financial Euphoria," Shiller finds and defends enough historical similarities to give even the most gung-ho portfolio manager a case of the chills. In particular, he examines the largest increases of foreign stock indices over the past 40 years. Exaggerated investor enthusiasm, it appears, is not only short-lived but often associated with "new era" theories. Remember when the Nikkei was the world's miracle bourse, and we were all living on the brink of the Japanese Century?

Refreshingly, Shiller doesn't cleave to this "been there, done that" historical hindsight. He identifies some fresh permutations of circumstance altering investor perceptions in today's market. In particular, he cites the World Wide Web which, in his view, conveys an impression of a changed future to all and gives people a powerful and intoxicating sense of mastery over the world. Because the Web experience is so immediate, because of the "intuitive plausibility of Internet lore," it's easier to imagine the consequences of this new technology compared to other, perhaps equally significant but less visible, technological advances. Hence, the bid-up of dot-com share prices from Wall Street and Main Street alike.

Shiller also argues for a profound case of mistaken identity in the age of the Internet: The recent rise of profits was well underway before the ascent of the World Wide Web, yet in these wired times a direct link is popularly imagined. This misperception of happenstance supports the widespread impression that digital communications drive endless abundance, which further pressurizes the optimism bubble.

For all his qualitative insight and interdisciplinary gymnastics, Shiller begins and ends his book with recourse to a decidedly more quantitative observation: The history of the market strongly suggests stock prices are, and have always been, a function of earnings. Though this association may from time to time be temporarily suspended -- as it seems to be at present -- the departure never lasts for long.

Or, to paraphrase The Artist, we may all be partying like it's 1929.