In the third installment of his lesbian sperm donor saga, Hank Pellissier describes the arrivals of his two babies -- born 21 days apart. 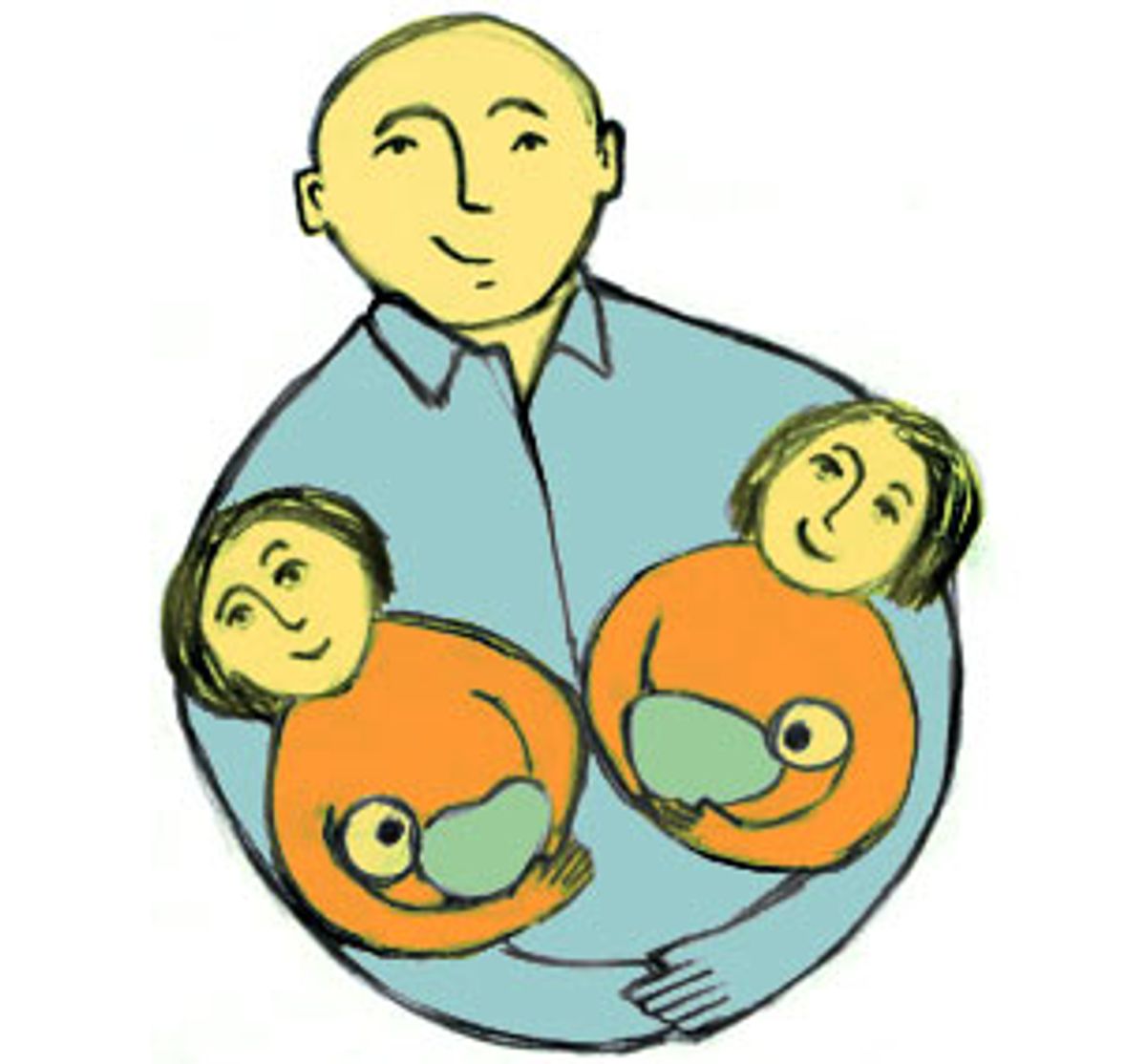 Glorious is my newborn daughter! I am a blessed daddy, cheeks and chin wet with tears!

The beautiful baby plucked from my wife's C-sectioned womb is purple, pretty and as pudgy as a Buddha with enormous bright blue eyes and fat fists that she swings defensively as she tries to fight off the hoses that three nurses are slithering down her esophagus to extract all the meconium (neonatal feces) that she has possibly swallowed.

My daughter, Tallulah. Squirming, like my heart. She's my angel, delivered to me to illuminate and exonerate my measly 47-year-old life, which in retrospect seems to have been so shallow and devoid of integrity before her arrival.

"You are m-my ba-baby." Sniveling, I introduce myself to the quizzical face swaddled in a cotton receiving blanket. "I am your daddy. Don't be afraid. I will protect you."

Glancing sideways, I examine with horror her mother, Carol, who is strapped to a horizontal cross with her abdomen eviscerated. Her uterus and other bloody organs are perched on her torso. Surgeons are hurrying to reassemble her. A furious hose is slurping an enormous quantity of blood out of Carol's interior into an object that resembles a clear plastic pony keg. The pony keg is rising quickly with my wife's crimson life fluid. Has the cesarean gone awry?

Glorious also is the newborn son: Nathan, parented by Rachel and Monica, his Jewish lesbian mothers. Baby Nathan Ezekial, whom I helped create with my seminal fluid.

"Nathan," I whisper to the curly-haired tot with the wrinkled brow whom Rachel and Monica have escorted to our hospital room, K-224, on Day 3 of Carol's recovery. "Nathan, I am your 'Uncle Seed.' The sperm-donating guy!"

I aim his worried skull toward my daughter. "Over there," I instruct him. "See her? That's your half-sister, Tallulah."

"Let's take pictures," beams Rachel, waving her Polaroid. "Put Tallulah and Nathan side by side."

My wife smirks a weary smile, but she's game. Carefully, she picks up our screaming, gargoylish creation, who is enraged and half-starved from drinking only colostrum (pre-milk). Carol places Tallulah's bellowing face next to Nathan's angst-ridden visage. I stand behind everybody, my happy arms encircling Carol and Monica's shoulders. Proud progenitor!

Carol gazes abstractly. Monica faintly curls her mouth. They're tired; I'm not. I flash all my teeth, happier than the Cheshire cat. Why not? I'm bursting with cockiness because I've spawned two human beings in 21 days: Nathan Ezekial, born Dec. 19, 1999, and Tallulah Louise, born Jan. 10, 2000.

I'm the biological father of both. Did I say that already? ME! ME! ME!

My ego runs amok until Rachel remarks, "Hmm ... they don't at all look alike."

Huh? The three women inspect the physiognomy of the infants and obliquely decide that I've had zero influence. Ears? Feet? Lips? Nothing resembles me. Round-faced, pinky Tallulah is the mirror image of my Welsh wife, and Mediterranean-complexioned, Moses-nosed Nathan is fashioned from the same clay as Monica.

My genes? Recessive? I didn't expect clones of myself, but it would be nice if ... something ...

Finally, the discussion moves to bodily functions and it's revealed that both tots are afflicted with ferocious flatulence. "Yes!" I exult, pumping my fists in the air like a Super Bowl champion. "That's from ME! Absolutely. I'm a savage farter, thank God."

I deluge Rachel and Monica with a monologue of my methane lineage, while my wife cringes.

"My mother is an amazing trumpeter, despite drinking Beano for 40 years and avoiding all legumes. And my 101-year-old grandmother can still blow up her skirts. I'm from a loud clan of wind passers; our butt barking is descended from the Mennonite branch of the family tree."

I shut up, but for the remainder of the visit my chest puffs up whenever a squeak razzes out of a newborn anus.

Carol and Monica sit together like war veterans now to competitively compare the gruesome details of their labor. Although Tallulah was supposed to have been born first, on Christmas Day, with Nathan following on New Year's, their nativities were reversed when the dainty 6 pound, 5 ounce boy cannoned out 12 days ahead of schedule, while the huge 9 pound, 7 ounce girl hibernated for an additional 17 days in an impossibly jammed posterior position. But was Monica's "natural" delivery less painful?

"Nathan's square head lacerated my vagina," the slim-hipped lesbian boasts. "Three doctors spent two hours sewing me up; I needed 65 stitches. Gallons of blood all over the room."

"I still haven't bonded," Monica confides. "I have to get over my own experience first."

Rachel and I sit quietly and listen. I feel close to her because we've been through the same totally helpless feelings that all nonpregnant spouses endure. We know this, but we don't want to talk about it. All we want to do is play with our kids. I grab Tallulah, who is napping sullenly; Rachel cradles Nathan in her warm, sweaty arms. We hover the half-siblings around each other for a long time, hoping they'll intuit the shared DNA. No magic occurs. They snore, fuss and adamantly ignore each other.

"Isn't that illegal?" I worry.

Eventually, we trade tots. I hold Nathan, the fruit of my seed, in my arms. I stare at his face. With a shock, I realize that I don't feel anything. No bonding whatsoever. I try, but there's nothing. I don't know him. I just met him. I love my daughter whom I carried tenderly to the nursery when she was five minutes old, my daughter whom I have changed the diapers of and worried about and fed formula to while my drugged and blood-drained wife recovered after her worse-than-routine surgery. I love my daughter, who does indeed resemble the woman I love, but Nathan? Sure, he seems great, but my heart is monogamous with love for Tallulah, not him.

Nurture -- not nature -- enslaves my sympathies.

After 10 minutes of groans, gasps and damp explosions, it's determined that the two tots need their diapers changed. Rachel and I decide to maintain our switch for this chore; we'll enjoy the experience of washing opposite genitalia. I rip off Nathan's diapers.

"Watch out," cackles Rachel. "He can pee all over you with his cute little penis."

I stare at his organ, embarrassed. Sure, it's far more like mine than Tallulah's, but I've grown used to hers; his seems odd and obscene. Anger rises in me when I see the scar from the bris (circumcision) that sliced off his foreskin. "I wouldn't have done that to you!" I mutter internally. "Dammit. I'm sorry."

Nathan's wrinkled, feces-drenched scrotum is trickier to clean than the simple grooves of my daughter, but I do my meticulous best while he lies there obediently. Afterward, I want my daughter back, so we switch again. Rachel is also relieved.

After a 45-minute visit, my wife's face starts to fall with fatigue. "It's time to say 'Shalom,'" I suggest.

"Come to Nathan's naming ceremony at the synagogue next week," Monica insists as they exit. "It's generally for baby girls, but we want him to have one. I know you're exhausted, but please; you're part of the ritual."

The naming ceremony created by their radical Reform synagogue is a benign celebration unmarked by the intimate bloodletting of its bris equivalent, but I'm reluctant to attend because I'm allergic to religion and I resent the sissifying of Nathan in a girlie rite. Isn't the poor boy receiving a confusing mixture of messages from his parents? They've already whacked up his weenie to honor a patriarchal barbarism and now they'll sing effeminate hymns and coddle him like a princess?

Carol, Tallulah and I arrive late, delayed by my procrastination. We situate ourselves discreetly in the back pew until Monica and Rachel, on the temple stage already, make eye contact with us and gesture us into the front row. Oh no.

The ceremony begins with a passionate Hebrew roundelay that Carol sings joyously while I cynically lip-sync. Prayers and other songs follow, I imagine; I can't remember because I was spaced out.

"You're on," Carol nudges me, eventually. "Hey! Earth to Hank: Forward."

"We want to especially thank today," announces Monica to the rapt, emotional, mostly homosexual audience of 250, "the donor, who performed long and selflessly to assist us. Hank Pellissier gave us the seed we needed to create our beloved Nathan."

A wave of titanic affection rises out of the audience; it floods the stage like a tsunami, washing up my skinny legs, drowning me in its warmth. For 10 seconds, silence. Then the room explodes in applause.

Speechless, I stand there, amazed. Gradually, I realize two truths: 1) Everybody here has been dying of curiosity, wondering who the donor is; 2) What I did is important to them. I didn't just beat off for 15 months. I helped gay people become parents.

"Thank you! You're wonderful! You're so kind!"

I hear these phrases a hundred times each when the ceremony ends and the party ensues. Monica's father from Brooklyn blesses me incessantly for providing him with a grandson. Rachel's abundant relatives treat me to wine, cake and ear-to-ear smiles. I hug strong gay men, lesbians in sweaters, aunts, uncles, cousins. Carol is reverenced for her generosity in "sharing me." Tallulah is flattered for cuteness.

When the celebration subsides, I try to slip out with my family, but I'm snared by a recent arrival, Rachel's mother, Esther, who miscalculated the time it would take to drive up from Beverly Hills.

Esther holds my hand. She insists that I accomplished something heroic.

"It was fun," I giggle. "No problem. Really. I'd do it again. Actually, I'd like to get your daughter pregnant next year."

"Promise?" she gasps happily. "Will you do that for me?"

Esther exhorts something in Hebrew or Yiddish that I subconsciously comprehend because I am like her now: I'm no longer young, but I have a daughter and already I want grandchildren. I am suddenly in alliance with all parents and wannabe parents who dwell temporarily on the face of the earth and crave tearfully, tenderly, a small chunk of their being that will survive into the mysterious future long past their own onrushing demise.

Hank Pellissier, aka Hank Hyena, is a columnist for Sfgate.com and a frequent contributor to Gettingit.com.