Bring on the germs. Too much cleanliness may be making some people sick. First of two parts. 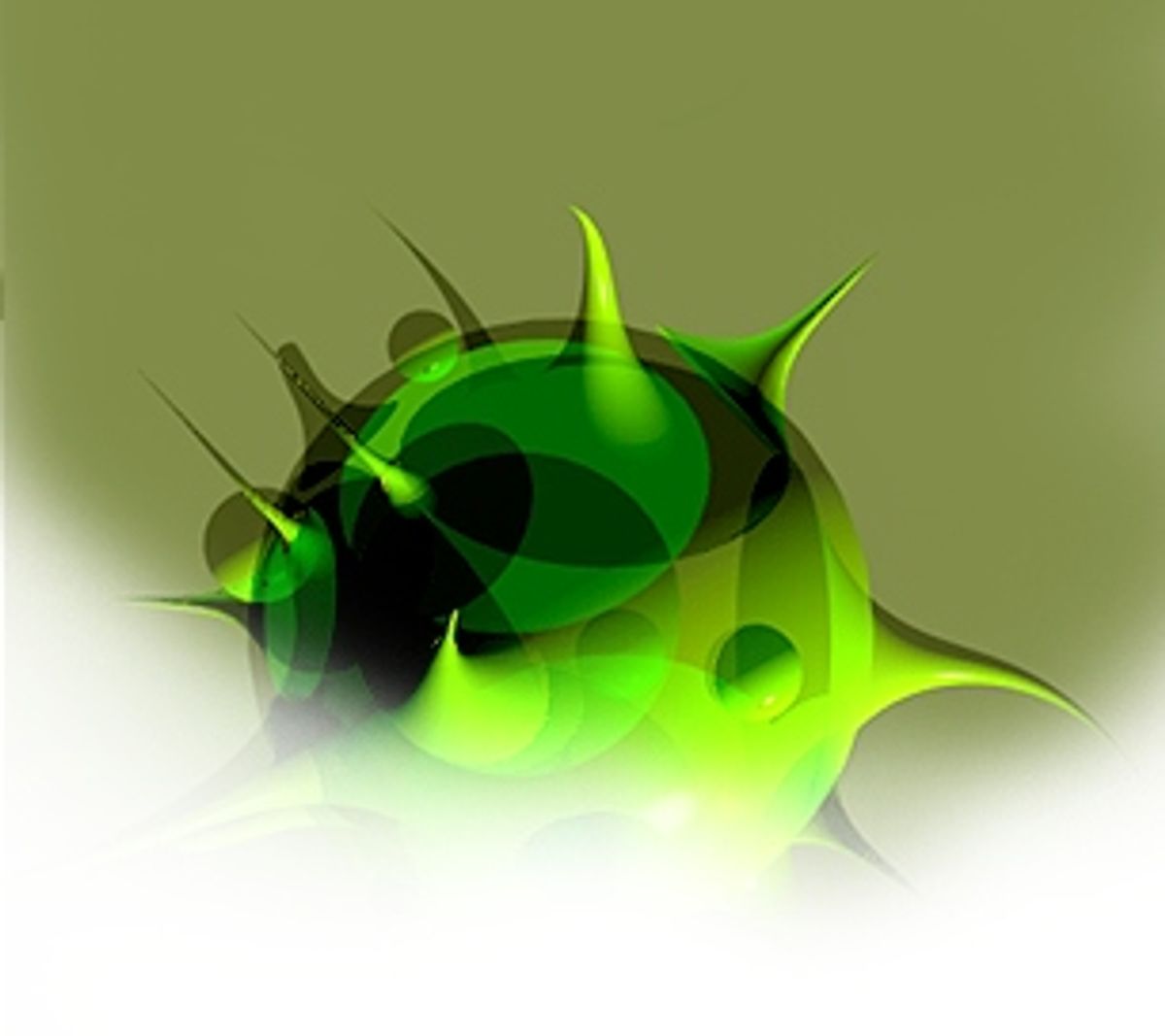 More and more we've come to act as if cleanliness really is next to godliness. The modern developed countries have become obsessed with eradicating microorganisms of every kind. We've never been cleaner, and we've never been more freaked out about cleanliness. We could eat off our floors, if the very idea didn't give us a panic attack.

Nearly 700 new antibacterial products -- lotions, toys, mattresses, touch screens -- hit the market in the U.S. between 1992 and 1998, and the bandwagon shows no signs of slowing down. TV shows about the germiness of motel bedding or the germiness of raw chicken have made a vivid impact. I've noticed that increasing numbers of perfectly sane people won't leave home without a bottle of an antibacterial hand cleaner like Purell, so they can sluice down hourly.

The citizens of Japan are even more concerned about hygiene than Americans. (Accordingly, stories marveling at their obsessiveness are a favorite of American media coverage of Japan.) Japanese manufacturers pump out antibacterial telephones, scissors and deposit books. One company claims to sell a million antibacterial ballpoints a month. Some department stores have whole sections of antibacterial stationery. My favorite product: antibacterial bait.

Sanitation has been a triumph of modern medicine, all but eradicating many diseases and parasites. We've whipped the body louse, trichinosis, typhoid and childbed fever, and we're not a bit nostalgic. But there are signs that this very preoccupation with good hygiene is making some of us sick.

Many immune system disorders are on the rise. There we sit, in our sparkling kitchens, using spotless glasses of pure filtered water to wash down antihistamines. The number of people complaining of allergies has doubled in the past decade. The number of people with asthma (currently around 17 million Americans) increased by 46 percent between 1982 and 1993. Other immune disorders, from Crohn's disease to multiple sclerosis, are also proliferating. For instance, the incidence of Type 1 diabetes, an autoimmune disease, is increasing by 3 percent to 5 percent a year. While many of these illnesses have a genetic component, the rises are too sudden to be the result of genes spreading through the population.

Could it be that our laudable cleanliness has something to do with the increase in immune disorders? Epidemiologists, immunologists, bacteriologists and parasitologists from England to Iowa think this may be the case. According to what's called the "hygiene hypothesis," our immune systems, which evolved in environments where we couldn't escape disease, microorganisms of every description and just plain dirt, don't always develop normally if they don't meet these things during our childhood development.

Exactly how might such environmental challenges as bacteria, viruses and other microorganisms work to set the immune system on the right track? Most proponents of the hygiene hypothesis say that there is a balance in our immune systems between two kinds of reaction, the Th1 and the Th2. Th1 lymphocytes primarily respond to bacteria and viruses, and Th2 lymphocytes primarily respond to parasites. Th2 is in charge of classic allergic symptoms such as releasing histamines and releasing sheets of mucus to wash parasites away.

Many hygiene hypothesis proponents suggest that if a baby's developing immune system doesn't meet enough viruses and bacteria, or if it doesn't meet the right kind, Th1 reactions may not be sufficiently stimulated. The immune system may become unbalanced, with an overactive Th2 response, which treats an innocent flake of cat dander as a menacing parasite and makes the person in question feel dreadful. The end result? Classic allergic symptoms: itchiness, sneezing and maddening quantities of mucus.

Dr. Koichiro Fujita, a parasitologist at the Tokyo Medical and Dental University and author of many books on hygienic Japan, including "Cleanliness Is a Sickness," is concerned about his country's love affair with antibacterial goods. Fujita says this fetishistic sanitation is giving the Japanese allergies, dermatitis, asthma and generally out-of-whack immune systems.

"We human beings used to possess immune cells to deal with outside germs and parasites," Fujita told Newsweek. "But the cleanliness boom took away the job of those cells. They became unemployed. That is why they began to react to such items as pollen and ticks."

While some antibacterial products don't affect bacteria any more than soap and water do, other products really do kill bacteria, raising the worry that fast-moving bacteria will quickly evolve mechanisms to survive them. This could add one more immunity to the bacterial arsenal and make the evil superbacteria that dwell in hospitals -- bacteria that gobble antibiotics as a tasty appetizer before they feast on your living flesh, for example -- even harder to kill.

For example, in the lab, bacteria can acquire resistance to triclosan, the most widely used antibacterial agent. Charles Rock, a researcher studying triclosan resistance at St. Jude Children's Research Hospital in Memphis, Tenn., says, "We consider this to be a serious public health concern." If we keep tossing triclosan in products like lotions, fabrics and kitchen cleansers, Rock fears, "the widespread use of the drug will lead to the appearance of resistant organisms that will eventually compromise the usefulness of triclosan, and other antibacterials that interact with the same target."

Can we ever foresee a life without bacteria? Unlikely. Bacteria are a part of our lives that we can't escape. They live on our skins, in our mouths and in our digestive tracts. Mitochondria, which supply energy to our cells, are former microorganisms (with their own DNA) that have moved in to stay. The "benign microflora" of our bodies help digest our food, produce vitamins and, in their territorial way, deter malign microorganisms from moving in.

While no amount of antibacterial products can lead to a germ-free existence, there are laboratory animals -- mice, rats, minipigs -- that live and die expensive, germ-free lives. Germ-free animals are born to germ-free animals, or delivered by cesarean section. They live in sealed environments with sterile air and food, and are created to clarify the roles that microorganisms play in our lives. Germ-free animals proved that bacteria cause tooth decay, for example. They may also provide evidence to support the hygiene hypothesis.

Germ-free animals need special vitamin supplements because they don't have gut bacteria, the benign microflora that manufacture vitamins and release minerals. They live no longer than regular animals. They typically have an enlarged cecum, smaller heart, lower blood volume and chronic mild diarrhea. They have fewer white blood cells than animals that meet and greet germs, and different proportions of lymphocyte types. If scientists infect them with a known microorganism, they don't cope well. Theirs is not the paradise of cleanliness we've been looking for.

Finally, germ-free rats (from susceptible lines) are more likely to come down with the autoimmune diseases rheumatoid arthritis and insulin-dependent diabetes than regular microbe-hosting rats.

Given that it's impractical and undesirable to be germ-free, isn't it still safest to be as clean as possible?

Not according to a group of British scientists who have been studying allergies such as hay fever, asthma and childhood eczema. Dirtiness, they suggest, may in some way protect children from these ailments.

One of the earlier studies that sparked the hygiene hypothesis came from epidemiologist David Strachan, who looked at the records of 17,000 British children and found that the more older siblings they had, the less likely they were to come down with hay fever. Hay fever is a new disease, first described in 1819 in England and in 1852 in the U.S., and essentially nonexistent in Japan until the 1950s. It's far more common in the city than in the country, despite the fact that the country is where the hay is, not to mention higher levels of other pollens.

By the same token, children from small families who go to day care before age 1 have fewer allergies than children who stay home. And children who get oral antibiotics before age 2 have relatively more allergies.

The studies of asthma point to similar trends. Asthma too was once rare, and now its incidence is soaring. In Britain and Australia, 20 to 30 percent of the population has asthma symptoms, ranging from mild to life threatening.

A study at the Institute of Child Health in Bristol found that out of 14,000 English kids, the ones who had daily baths and who washed their hands more than five times a day had 25 percent more asthmalike symptoms.

Graham Rook, an immunologist at University College, London, and one of
the boosters of the hygiene hypothesis, compares the immune systems
of children raised without exposure to the right microorganisms to the
brains of children raised without the usual mental stimuli. The optic
neurons of a person who has been blind since birth, for example, won't make the right
connections. So if an operation gives normal eyesight later in life,
the person will still not understand what he sees. It is possible that the developing immune system also depends on exposure to stimuli.

Rook has theorized that childhood vaccinations may bear part of the blame for denying the developing immune system a proper workout. A study done in Guinea-Bissau found that kids who'd had measles were only half as likely to have allergies. Were measles vaccinations setting kids up for developing allergies? The evidence is ambiguous so far. A more recent Finnish study found the opposite: Kids who'd had measles were more likely to have allergies.

But Rook and colleague John Stanford are also looking at dirt itself, and the abundant mycobacteria that live in soil and fresh water. It's true that a few mycobacteria aren't very nice -- tuberculosis, leprosy -- but most are abundant but harmless little guys that can't live in the body. So to get exposed to them, kids should grub around in the dirt. And when Rook and Stanford say dirt, they mean actual soil, not the stuff that accumulates under the refrigerator. Actual soil is scarce in inner cities, and parents tend to steer kids away from it, rich as it is in sharp things, stinky things and embarrassing things.

Rook has suggested that this could be a clue to the skyrocketing asthma rates in inner cities. "The inner cities guys don't have gardens," Rook told the New Scientist.

While the hygiene hypothesizers are excited about their findings, they're quick to note that nothing has been proved. The immune system is still imperfectly understood. "We're desperately oversimplifying," Rook told Science News. "We don't understand, really, why sometimes Th2 responses go crazy ... These are terribly complicated phenomena."

But if it turns out that the young immune system needs to meet certain ancient enemies in order to develop normally, what shall we do about it?

Most proponents of the hygiene hypothesis urge people to keep vaccinating kids. Rook told the Globe and Mail, "Most of medicine I'm rather skeptical about, but vaccination is just about the best thing that medicine does. Science can't go backwards."

And indeed, some scientists are actually creating therapies that fly in the face of the idea that cleanliness is healthiness. If we won't go to the dirt, they'll bring the dirt to us. And the bacteria. And the mites. And the worms.