The best American whats of the century?

A new best-of omnibus has some terrific stories. But are they mysteries? 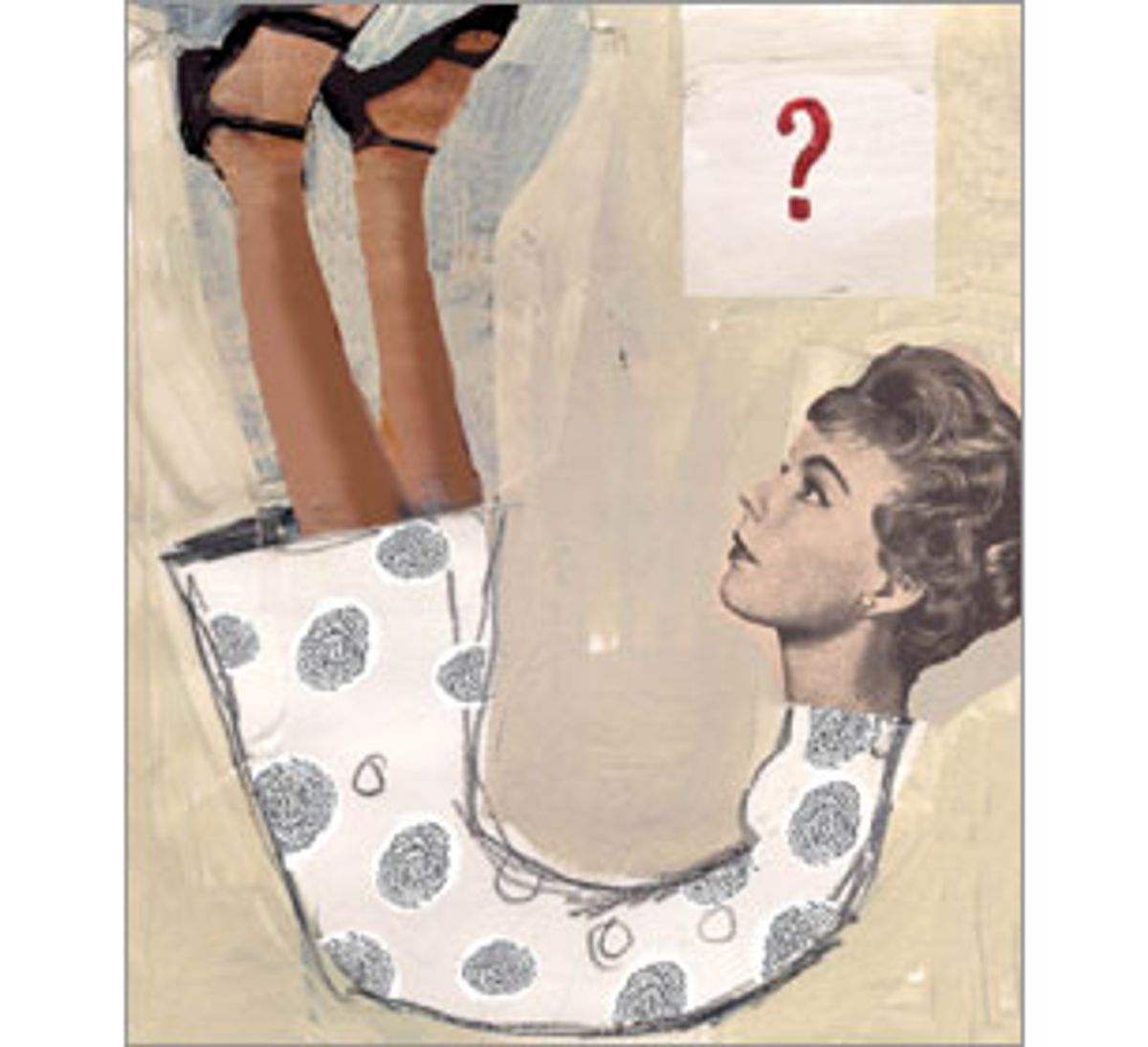 I became suspicious of "The Best
American Mystery Stories of the Century"
when I saw, second on the list of the
contents, "Paul's Case" by Willa
Cather. In what way is "Paul's Case" a
mystery story? Maybe in the way that the
New Testament is -- the latter has,
after all, a betrayal, an unjust
execution and a surprise ending. Come to
think of it, the New Testament, if only
it had been written more recently and by
an American, would qualify better.
"Paul's Case," an extraordinarily
powerful story of self-immolating
romanticism, involves a crime (petty
theft) only peripherally.

Someone has definitely been salting the
mine. Otto Penzler, the series editor,
has said that he considers a mystery
"any fictional work in which a crime, or
the threat of a crime, is central to the
plot or theme of the story." This
conveniently capacious definition
allowed him to include John Updike's "Bech's Noir" in his "Best
American Mystery Stories" volume for
1999. Why doesn't Penzler just put that
notorious puzzler "Lolita" on the shelves of his Mysterious Bookshop and be done
with it?

Some other fictional works in which a
crime is "central": the Eugene O'Neill
play "Long Day's Journey Into Night"
(drug use), the Rolling Stones song
"Sympathy for the Devil" (serial
killing) and the nursery rhyme "The
Queen of Hearts" (theft).

A clue to the motive for this
overinclusiveness can be found in the
curiously petulant introduction by Tony Hillerman, the new volume's
editor. Despite his obvious
accomplishments and acclaim, Hillerman
speaks of being "driven out of the
so-called mainstream of American writing
by the academic critics and the academic
trends." He describes the history of the
crime novel as a struggle between the
"classic" form (English, upper class,
bad) and the "novel" form (those like
his, with "lofty literary goals"). Hmm.

Leaving aside the whole "lofty literary
goals" question, let's see how many of
these mysteries are mysteries in the
sense that you or I might use the term
-- i.e., stories in which a crime has to
be solved.

I think we can immediately throw out
Flannery O'Connor's "The Comforts of
Home," despite O'Connor's style, which
is so sharp it draws blood. Likewise
James Thurber's "The Catbird Seat," O.
Henry's "A Retrieved Reformation," Ring
Lardner's "Haircut," Damon Runyon's
"Sense of Humor" and Pearl S. Buck's
"Ransom."

Thurber is a humorist whether
or not his typically downtrodden hero
pretends -- hilariously -- to be a
gangster. (A more unintentionally
illuminating inclusion might have been
Thurber's "The Macbeth Murder Mystery,"
in which an avid mystery reader takes
the tragedy on a vacation by mistake. It
turns out that the Scottish king is not
the murderer after all.) O. Henry is
famous for his swinging-door stories;
they push out, then at some point snap,
come back and hit you in the face. But
there is never anything to solve.
Raffish charmers Lardner and Runyon are
less well known but almost as sui
generis; "dialecticians" might be a good
word for them. Buck's current claim to
fame seems to be the legend, "All
Pulitzer Prize-winning authors were
alcoholics. Or Pearl S. Buck." Her entry
here is not even a story.

Psychological profiles do not count.
That eliminates the Patricia Highsmith,
in which a boy is driven mad by the
cooking of a turtle, and the Shirley Jackson, in which the madness of an
obsessive blue blood is slowly revealed.
Ditto the two slices of life from the
legal system by Evan Hunter and by
graphomaniac Joyce Carol Oates. ( I have
read better stuff by all four of these
authors, but that is incidental to our
investigations here.)

Ah, Cornell Woolrich, a true nut case. I
love Cornell Woolrich. His exploration
of paranoia is unparalleled. You need a
Valium just to read his purple prose.
And "Rear Window," on which the Hitchcock
movie is based, is one of my
favorites. The creepy combination of
intimacy and distance evoked by the
spying always sends me reeling. But you
certainly never doubt what the Raymond
Burr character is up to, so ... Sorry,
out.

Harlan Ellison's "The Whimper of Whipped
Dogs" was published in 1973, which may
explain it: Too many drugs, perhaps?
Ostensibly based on the Kitty Genovese
case, in which the victim's neighbors
heard her being stabbed and did nothing
about it (not even call the police), the
story features a final quotation from
Rollo May and sentences like this one
about New Yorkers: "They were worshipers
at a black Mass the city had demanded be
staged; not once, but a thousand times a
day in this insane asylum of steel and
stone." This insane-asylum metaphor is
probably a Freudian slip. The story
would make excellent evidence in a
sanity hearing.

Stanley Ellin's wonderful duel, "The
Moment of Decision," is an O. Henry
story for people with brains. (I, too,
am a big fan of Ellin's, but I was
surprised to see in Penzler's
introduction that he considers the month
that Ellin could work on a story to be a
long time.)

Stephen King? Oh, come on. Let's
just drop him right here. Jerome Weidman
and Joe Gores I excuse as sentimental
favorites. Curiously, the Gores story,
"Goodbye, Pops," was Hillerman's
selection for "Master's Choice," edited
by Lawrence Block, in which various
detective writers picked out the stories
that had had the strongest influence on
them. (Wacky Ellison chose Jacques
Futrelle's "The Problem of Cell 13,"
which also appears in this volume.) But
why dwell on my doubts about "lofty
literary goals" here? Both are sweet
pieces, long on the guilty love sons
feel for their fathers (or father
figures) and very short on cryptic
qualities of any kind.

Three of the strongest stories in the
volume are explorations of social
issues. As the just men rise in the
courtroom of Melville Davisson Post's
1916 "Naboth's Vineyard," it seems to
the young narrator "that the very hills
and valleys were standing up." Susan
Glaspell, in the 1917 "A Jury of Her
Peers," creates two layers, one of male
officialdom and one of female
"trivialities" and "gossip," which is
where the truth is revealed. Michael
Malone, another of my favorites, reveals
his usual cunning cross-section of
social classes in the 1996 "Red Clay."

Then there is a whole category of
stories featuring the clever criminal.
This would include the work of Elmore Leonard, who has
always been careful to distance his type
of writing from whodunits. I must say I
was secretly happy to see he did not
make the cut here. Those who did were
Frederick Irving Anderson, with a 1914
story about outtricking a master
trickster; Henry Slesar, who writes in
1957 about a killer, oops, I mean, a
lawyer; Jack Ritchie, with the
delightfully twisty "The Absence of
Emily," from 1981; and Donald E.
Westlake, with more tiresome whimsy
about Dortmunder and his cronies. Also
Ben Ray Redman, Robert L. Fish and
Brendan DuBois. I include here, too,
Futrelle, creator of Professor Van Dusen
aka the Thinking Machine, because in
"The Problem of Cell 13," the Machine
pretends to be a criminal to show that
he can outwit his jailers.

Very pleasant reading, all of it -- even
Dortmunder is a welcome guest if the
party is big enough -- but not what I
would call mystifying in any way.

A similar category features the dumb
criminal. The thinking here seems to be
that if the life you describe is low
enough it automatically turns the work
into a mystery. In a slightly more
puzzling precursor to the others called
"Blue Murder," from 1925, Wilbur Daniel
Steele describes the brutish killings of
two brothers. Then there are three very
recent entries: "Hot Springs" by James
Crumley, "Poachers" by Tom Franklin and
"Running Out of Dog" by Dennis Lehane. The poetry
they find in their virtually mute,
dispossessed characters suggests that
this may be the richest vein being
followed right now; Crumley is one of
the most gifted crime writers around.
The entanglements of scheming adulterers
in the 1933 California versions written
by James M. Cain ("The Baby in the
Icebox," best described as "Double
Indemnity" goes to the circus) and John Steinbeck ("The Murder") are
also entertaining. But are any of these
mysteries? No, no, no, a thousand times
no.

Of course, there are always the stories
in which professional investigators are
let loose upon a problem. Certainly
these should qualify. Let's see. The
Harry Kemelman and the Ellery Queen are
too stupid to read, let alone call
stories of any sort. The John D.
Macdonald is also ridiculous; he should
have found some way to publish just the
title, which is "The Homesick Buick." Sara Paretsky, Sue
Grafton and Stephen Greenleaf are
all better off writing novels; their
talents do not suit the shorter form.
The same with Ross MacDonald -- the
greatest mystery in 1953's "Gone Girl"
is how many generations he can cram into
30 pages. He doesn't do too badly. And
Margaret Millar ("The Couple Next Door")
was married to him, so she's got to go,
too. (If this sequence offends, then
think of your own reason to do her in
first.)

I'm tempted to keep Lawrence Block. The "Burglar"
books had led me to believe he was a
hack, but his "By the Dawn's Early
Light" is ample refutation. The story
perfectly captures the midtown Manhattan
saloon world of hard workers and even
harder drinkers. But I can't let
sentiment stand in my way now.

There's still Dashiell Hammett and
Raymond Chandler. Hard, really, to
question the qualifications of the two
grandfathers, paternal and maternal, of
modern-day American detective
literature. And their respective
stories, "The Gutting of Couffignal" and
"Red Wind," are great. But isn't the
Hammett a little ... theatrical? And the
Chandler a little ... atmospheric?

That leaves William Faulkner and his "An Error in
Chemistry." There's a body, there are
clues, there's a solution. But if you
think I am going to leave this little
tin star pinned only on Faulkner, of all
writers, then you are crazier than
Ellison. So Faulkner's out.

Wonderful collection. Amazing, though,
that it doesn't contain any mystery
stories.