The star of "Strangers With Candy" likes "small woodland creatures" and wants to play Angie Dickinson as "Police Woman." 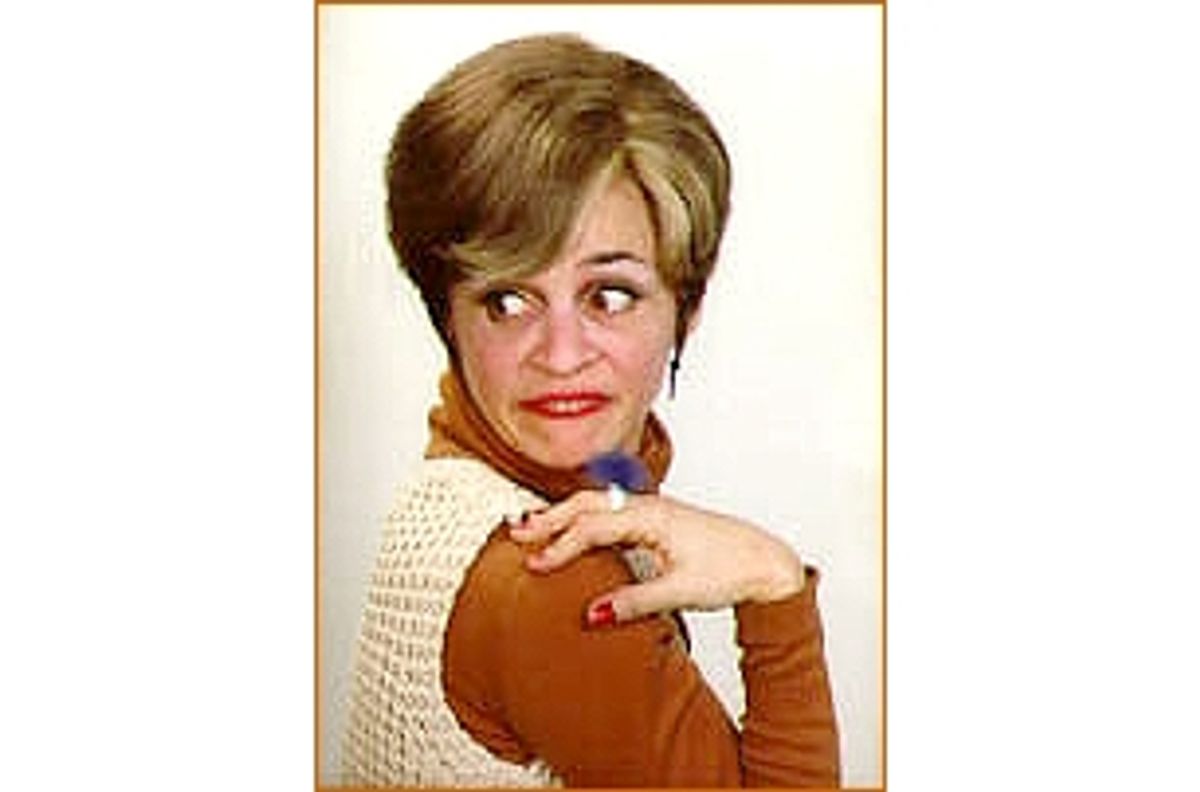 The TV roundup of your local paper might
list "Strangers With Candy"
as a sitcom, but to assume that this
implies the show bears any relation to
something like "Home Improvement" or
"The Nanny" would be a grave mistake.

When "Strangers" first aired two years
ago as a piss-take on those weepy "After
School Specials" of the '70s, the show
tipped the scales with a warped wit
rarely encountered on the small screen.
Now, signed on for a third season on
Comedy Central, "Strangers" remains a
trusted outpost for those who find their
funny well beyond the standard sitcom
fare.

At center stage of the show is actress
Amy Sedaris, who plays the rumpled
chum-pot Jerri Blank. Blank is a former
teen runaway who, after a lifetime of
prostitution and drug abuse, has
returned to high school as a freshman at
age 46. With the possible exception of a
special trailer park edition of "Cops,"
"Strangers" is the only place one is
likely to encounter someone like Jerri
Blank.

The character represents an amalgam of
the fringe dwellers and human ruin that
have held the imagination of Sedaris
over the years. "The more serious they
are and the more tragic they are, the
more I'm drawn to them," she admits.
"I'm usually the only person who'll ever
talk to them and they tell me
everything."

First, there was Bobbie. "I lived over
this woman in Chicago and she was just
trouble," relates Sedaris. "I mean, she
had tattoos that she had tried to take
off herself. She also always thought she
was smelling formaldehyde. She'd call up
and say, 'Hey, this is Bobbie downstairs
... Do I smell formaldehyde?'

"And she'd always drink too much and
fall down. I'd constantly see her with a
broken leg or a broken arm." While
Bobbie proved an undeniably rich source
for any performer to draw from, Sedaris
also found inspiration from a late-'60s
drug prevention film. "We found this
documentary of this woman in the '60s
who was a drug addict and a prostitute
and she'd go to high schools and talk to
students. The woman's name is Flurrie."
Sedaris adds, "She looks like Michael
Dukakis. She's horrific looking."

Sans the saddlebag thighs and prison
tattoos that help define her TV
character, Sedaris herself is pretty and
diminutive. She is also considerably
more laid-back, several RPMs slower than
her TV persona, which comes off as a
sort of manic, perverse Lucille Ball. Of
her recent appearance on Conan O'Brien
she groaned, "God, with all that
fidgeting and unfocused energy I had, I
looked like a damn monkey. So annoying."

Some call it quality entertainment.

Sedaris' Greenwich Village apartment is
tidy, nearly sizable by Manhattan
standards and distinguished by several
personal decorative touches. Choice cuts
of plastic meat are placed throughout
the living room. The TV is adorned with
a large plastic turkey. "I covered it
with foil for Thanksgiving and the
people who came over were extremely
disappointed when they found out it
wasn't real." There is also a stuffed
squirrel featured prominently on a
coffee table. "I really like squirrels.
My whole family does. We all like small
woodland creatures."

Hard to say why it comes as a surprise
that Sedaris and her family hail from
North Carolina. But it is her home state
nonetheless. When asked what her life
might have been like if she had remained
there instead of defecting to the North,
Sedaris quickly responds, "If I had
stayed in North Carolina, I'd be wearing
ruffles or a uniform. You know,
waitressing and taking care of a stroke
victim ... I probably would have been
dating him, too, by now."

Not surprisingly, Sedaris grew up in an
open, permissive household where
creative expression was never
discouraged. "We all did our little
plays in our house," she says. "For a
long time I had an imaginary classroom.
I'd come home from school, put on my
mom's high heels and go right to the
back bedroom where I had a wall that was
one big chalkboard and I would teach my
imaginary students. This went on for
years and years. Then I realized I was
too old to do this, so then I just kind
of did it to myself in my head. I still
do that -- like if I'm making an omelet
I pretend it's a cooking show and I'm
teaching someone."

Sedaris' lifelong fascination with
costumes and wigs has also been lovingly
nurtured. "In the first grade I got my
first wig. It was a fall and I still
have it," she says, gesturing to her
closet. "Since then I get two wigs for
Christmas usually. When I was a kid I'd
go shopping with my dad every Friday
night and I wore a different wig every
time I went," she adds.

True to her craft, Sedaris would remain
in character the entire time she and her
father were at the grocery store. "It
was mostly neighbors that I would
imitate. I think most kids probably did
that stuff, I just stuck with it,"
Sedaris says with a shrug.

The subject of wigs has Sedaris bounding
off to another room. She returns with a
photo she had done with the help of a
makeup artist friend. It is a large
color print of Sedaris as Angie
Dickinson at the peak of her "Police
Woman" period. The likeness is
staggering. Sedaris is a convincing
blond, and with a gold turtleneck and
pistol poised, the transformation is
utter and complete.

It's not merely an act of cosmetological
genius; Sedaris herself is totally
committed to her dream role. "I want to
play Angie Dickinson ... I want to do
'Police Woman,'" she says wistfully. "I
want to be so beautiful that I'm ugly."

For Sedaris, the urge to transform
herself in front of a camera seems too
great to overcome. "If someone wanted me
to pose in a bikini for the cover of
Vanity Fair, I'd make sure I'd have some
scars or grow a hairline. To look in the
camera and act like you're beautiful is
too hard for me." She continues:
"Photographers always seem to appreciate
when you come in with ideas. I mean,
I'll do what they want, but half the
time they don't know what they want. So
I come and say, 'OK, I got this
prosthetic leg, what can we do with
it?'"

Sedaris did in fact pose with a
prosthetic leg for Index magazine with
remarkable results. "That fake leg fit
me perfect," she says. "It must have
been for a little boy."

With her TV series in summer reruns,
Sedaris can return to her other
passions: stage work and baking. After a
two-year hiatus, she has agreed to write
and perform a play once again with her
brother, David, the author of popular
short story and essay collections such
as "Barrel Fever" and "Naked," and a frequently featured
commentator on the nationally syndicated
radio show "This American Life."

Exactly what their upcoming
collaboration will entail is a mystery.
"We have no idea what the play's going
to be about, what sort of characters
it'll feature. Nothing," Sedaris says.
The only certainty at this point is that
it will be opening in six months.

Judging from their previous stage
collaborations, it does promise to be
engaging. Earlier Sedaris and Sedaris
works, such as "Stitches," centered
around the story of a young woman who
had her face disfigured by a boat
propeller only to eventually star in her
own sitcom.

Then there was "One Woman Shoe," where
welfare moms had to perform onstage in
order to qualify for their benefits.
Sedaris adds the following to her
risumi: "I've done my
little brother before as a donkey in a
play at Lincoln Center. I had overalls
and had a hat on. It involved animals in
the forest and had witches in it."

One constant in each of these
productions has been the recurring
character best known as Piglet. Like
some knocked-up malcontent working the
Wendy's drive-through, Piglet is the
embodiment of the foulmouthed hardened
teen everybody knows and loves. "She's
in every play my brother and I do
together; we just change her name for
each play," Sedaris explains. "You know,
you can't do a character like that on TV
cause every word is fuckin', fuckers,
fuckin', fuck. Every word is a cuss
word. Audiences just go nuts over her."

At most of the theater productions she
appears in, Sedaris also performs double
duty: acting on stage and selling
cupcakes in the lobby after the show.
She also specializes in cheese balls. "I
always sell out of whatever I bring."

Why is she compelled to peddle baked
goods after a show? "I just love making
money. Cash, you know? It's such a great
feeling." Besides, Sedaris adds,
"baking is something to do at 3 in the
morning. If you're bored, bake."

But the growing popularity of "Strangers
With Candy" might just cut into Sedaris'
cupcake production. Several notables
have expressed interest in doing the
show. "Janeane Garofalo wants
to do the show again and Winona Ryder
has expressed an interest. I've heard
that Cher and Tom Waits are big fans
of the show, too."

Asked about performers she admires,
Sedaris says, "Clint Howard and that guy
from 'Boogie Nights' with the big
forehead that looks like an ax went
through it [John C. Reilly]. They both
kinda look like cave dwellers --
Cro-Magnons with big ol' hearts."

Despite its growing cachet among
celebrities, the double-barrel bizarre
nature of "Strangers With Candy" may
never play in the Midwest, but cult
status is OK with Sedaris. "It's not a
show for everyone," she says.

As for what to expect on "Strangers"
next season, it's anyone's guess. Except
for one thing. "I want to do a Ben
Franklin episode," announces Sedaris.
"You know, bring him back from the past.
I turned on the TV and saw an episode of
'Bewitched' where they did that. Darren
was having some company over and there
was Ben Franklin standing in the living
room and messing with a lamp. I want Ben
Franklin on my show!"