How researchers at one toothbrush maker figure out ways to make dental hygiene a pleasurable experience. 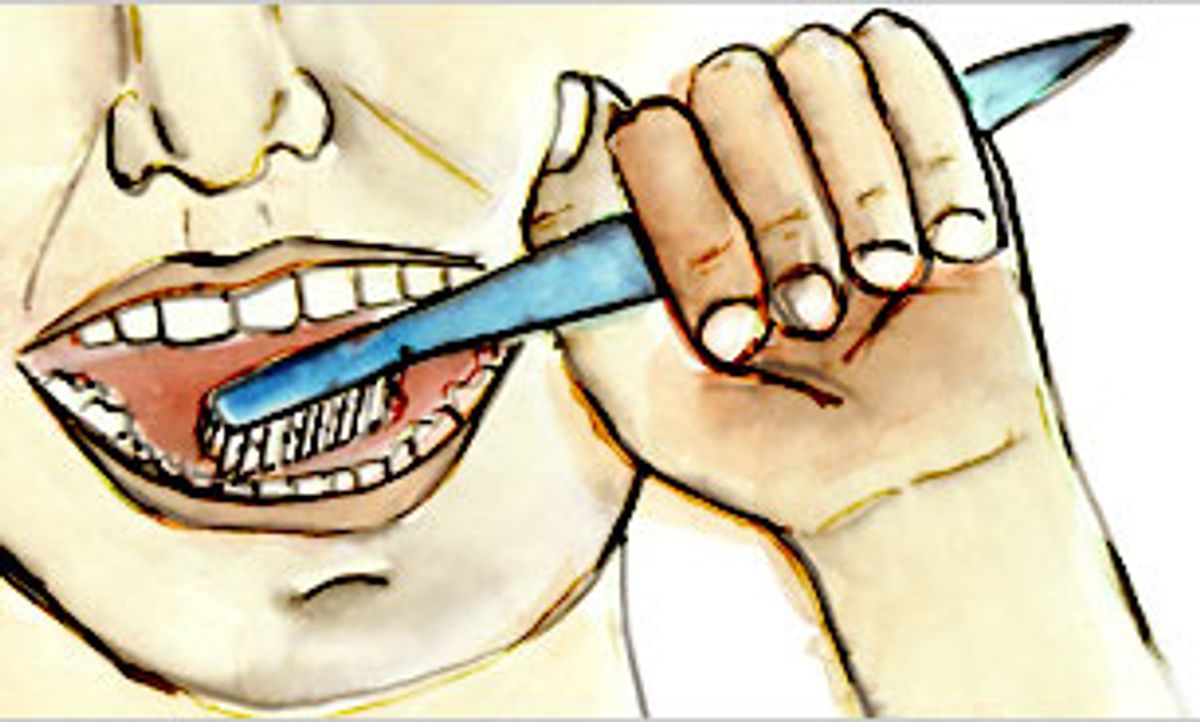 Apparently the CrossAction isn't just any toothbrush. It isn't, in the same way the Mach 3 wasn't just any razor. Both were developed by Gillette (Gillette owns Oral-B), a company with a flair for extravagant, costly research into everyday toiletry items.

I asked CrossAction development team member Dave Weber why a company would spend three years and $72 million reinventing the humble toothbrush. He said, "We believe that being leaders in daily oral hygiene care and physical plaque removal really takes understanding the science and going beyond what's been traditionally thought of in terms of toothbrush design." This is what a man who spends 11 months in a room working on a toothbrush sounds like. It sounds to me like the company should have let him out to go to the movies every now and then, but who am I to argue with a leader in daily oral hygiene care and physical plaque removal.

The notable feature of the CrossAction toothbrush -- aside from its costing a dollar or two more than its competitors -- is that it has angled bristles. "Vertical bristles just sweep across the teeth," said Dave, who is 40 and has a mustache with bristles of about the same length as the CrossAction toothbrush's. "If you angle the bristles in the direction of travel," continued Dave, "they are pushed between the teeth as they sweep across. So you get better penetration."

Does better penetration matter? Apparently so. Dave told me about a study from this month's American Journal of Dentistry. On the off chance that you don't subscribe to the American Journal of Dentistry, I'll tell you what it says. It says CrossAction blew 14 leading toothbrush brands out of the sink. It removed 9 percent to 64 percent more plaque.

The tests were done in Oral-B's product evaluation laboratory in Belmont, Calif., home of the "brushing robot arm" and the glass prism tooth. These were gizmos invented by the toothbrush engineers to let the toothbrush R&D people film actual between-teeth close-ups of angled bristles penetrating at different depths. I would bet you the cost of a CrossAction toothbrush that at some point in the robot arm tooth brushing proceedings, one of the lab techs leaned over and opened his mouth and had the robot brush his teeth, the way people who spend too much time in the copy room eventually photocopy their faces, or other parts. At least I hope so.

The other CrossAction feature that Oral-B crows about is the handle. "We wanted to help provide a more fulfilling grip in terms of the hand," Dave told me. Sometimes Dave sounded so serious about toothbrushes that I worried about his grip of reality. To find out how most Americans grip their toothbrush, Oral-B paid people to let them come into their bathrooms and videotape them brushing their teeth. I wondered whether it might have been simpler to just send around a questionnaire and ask. Dave's colleague Maisie Wong-Paredes said no. "Brushing is something people can't really tell you about," she said. To prove it, she asked me to describe how I gripped my toothbrush. I couldn't really tell her.

But we were going to find out. Dave and Maisie led me into a room with a row of bathroom sinks with one-way mirrors that allow toothbrush researchers to spy on people while they perform oral care on themselves. They gave me a CrossAction toothbrush and disappeared around the wall into the viewing room. At home that night when I brushed my teeth, I had to fight an impulse to open the medicine cabinet to be sure Dave and Maisie weren't in there.

As it turned out, I am power gripper, with periodic forays into oblique and distal oblique gripping. Oral-B identified the five major grip styles of American tooth brushers, and then designed their toothbrush to fit them. Should you care to know what these grip styles are, you can log onto the CrossAction online news bureau. Here you will also learn that Neil Armstrong brushed his teeth with an Oral-B toothbrush minutes before stepping onto the moon, and that the average person brushes his or her teeth for 46 seconds, despite constant nagging from dentists to spend a full two minutes at it. Maisie said that out of 160 people that Oral-B observed tooth brushing, only one brushed for two minutes. We shook our heads. If they can send an Oral-B toothbrush to the moon, why can't they build a man who knows how to brush his teeth?

Dave and Maisie asked me how I felt about my brushing experience with the CrossAction. I told them that my mouth felt really clean now. They looked disappointed, even a little hurt. At Oral-B, there's more to brushing than just cleaning and deeply penetrating. "The other thing we want to do is to deliver a pleasurable brushing experience," said Dave.

I have been using my complimentary CrossAction toothbrush, but I'm a few bristles short of delighted. It feels too big to me. But maybe I'm weird. Maybe I need to spend some time with an automatic carwash in my mouth.