Natacha Merritt's photographs of herself giving head are a high-tech display of sexual narcissism. 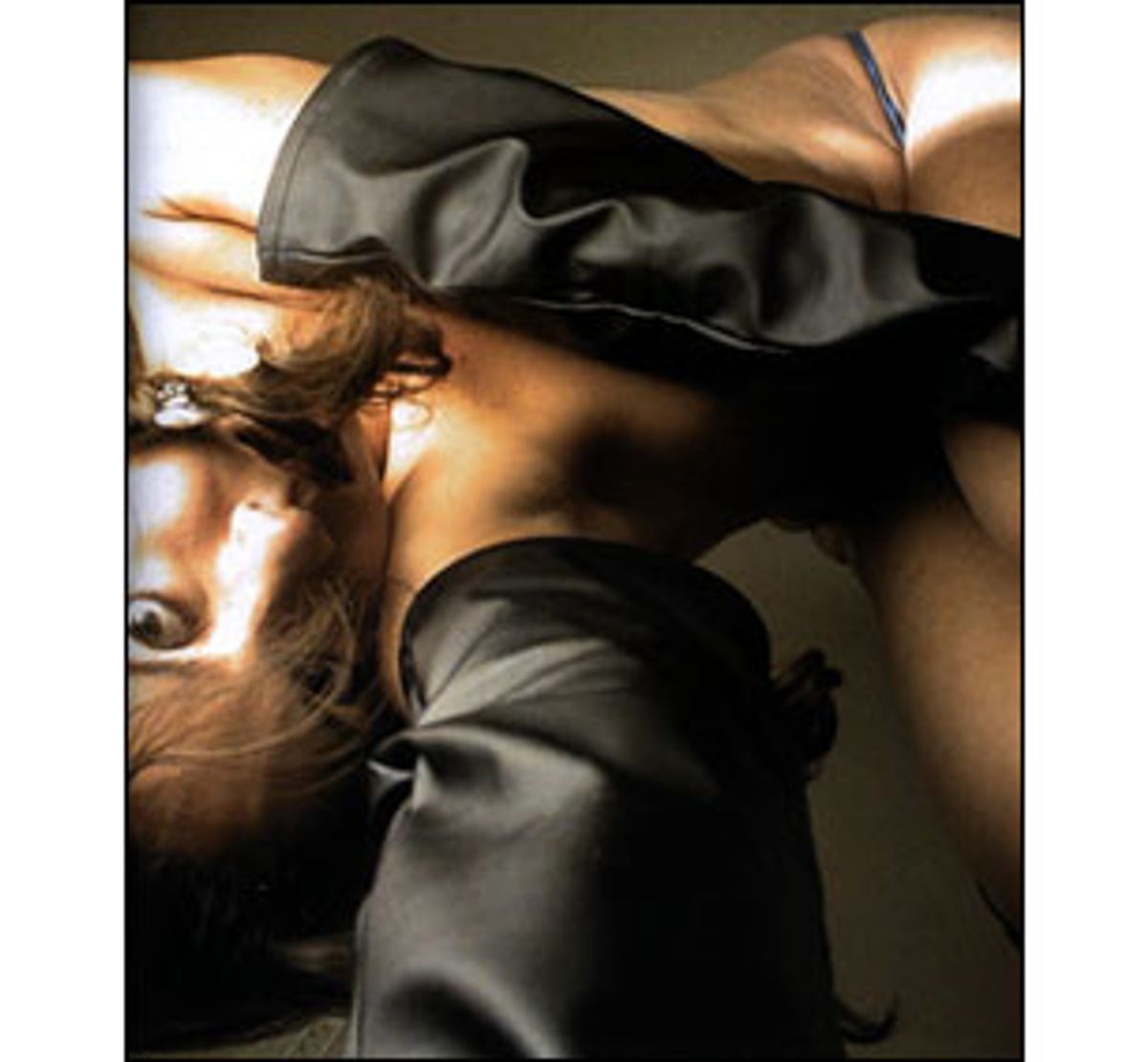 Natacha Merritt could be Cindy Sherman's worst nightmare. Merritt is a 22-year-old transplanted California girl living in Manhattan who poses for her own photographs, just as Cindy Sherman did so famously in the 1980s. A difference between them is that Sherman might photograph herself wearing plastic pig snouts and prosthetic breasts, while Merritt snaps photos of herself giving blow jobs. Real ones, not using prosthetics.

Most of Merritt's oral sex pictures are close-ups of her lips swallowing the lighthouse. Others were taken from strange angles that tend to exaggerate the size of the fellow's equipment; in one shot it looks as if Merritt is swallowing a child's arm whole.

But before I share my revelation, let's first dispense with the concept of art with a capital A. Sherman considers her own recent photographs of mutilated sex toys Art. Merritt isn't so sure.

Is it true you're not an artist?

I said that, right?

Yes. In your book you said that.

I don't know what an artist is.

Photography is not art?

That's me quoting someone else. What is an artist? I didn't set out to be an artist. The idea that I had of an artist when I was little, I didn't want to be. I don't know. What is art? You tell me.

So what are your photographs if they're not art?

They're art, but I'm not an artist. What I meant in my book was I had just read the introduction to [artist and photographer] Alexander Liberman's book, where he's talking and says photography is not an art, it's something else. He also says that his wife is more important than his art. Up until I read that I had put photography in front of sex and my love life and everything. That was really the diary entry of me realizing that art wasn't the most important thing to me. Does that make sense? Next question. [Giggles]

To understand the secret of the particular blow job photograph on Page 66, you need to know about Merritt's camera. She doesn't work with a Kodak or Warholian Polaroid. She uses a digital camera.

I've never seen a digital camera. How is it different from a regular camera?

I've never used a regular camera so I don't know how it's different.

You put film into it, right?

No. The film is either internal or it's on the memory of the camera. On the first one, I had to plug it in with a cord to my computer and that's where the images were stored digitally. Now, they're stored on these little cards or memory sticks that you download into your floppy drive.

What I know about regular color photography is that Kodachrome tends to emphasize warm colors like ...

I don't know what Kodachrome is.

It's a certain kind of film. It accents bright colors while Ektachrome emphasizes bluer tones. The light in the photographs of you and the woman in the bathtub is really orange. In other photographs, the light is blue. Was that just the light in the room, or did you fiddle with the camera and make aesthetic decisions?

Well, it's weird. I left out the most important part of a digital camera. It has a monitor that shows me the image -- how it's going to be. So I watch the image. When I'm working I only look at the screen, and when I see what I want, I capture it.

After she said that, I suddenly understood the blow job photograph on Page 66. Merritt photographed herself as she was gazing into the monitor of her digital camera. She saw the exact photo we now see on Page 66. This is a photograph of a young girl watching herself in a digital mirror -- giving head. The dick is a prop. We could almost say this is a photo of an artist at work, except Merritt claims she's not an artist. And she's right. She is a narcissist, captured on film.

Now narcissism gets a bad rap. The Me Decade and the yuppies and liposuction were and are forms of cultural narcissism. In narcissism's most primitive Freudian sense, it is the investment of one's libido into one's self. What's so wrong with that, really? Merritt's life work is leaving behind a photographic record of unrelenting narcissism.

The bulk of her work depicts her literally fucking herself. On page after page we see Merritt's naked American girl body. She has darkish hair. Pert smallish breasts. A modest bum. These photos are not cheesecake. The camera is usually too close to her body to objectify it. But Merritt shared a startling revelation about these "self-portraits." They aren't.

Most of the pictures in this book are of you naked.

Only 30 percent of the book.

I have this thing where I tend to photograph people who look like me. There's a brunet -- we look exactly alike. We were so close when we were working together. Living together. Traveling together. Never left each other's sight. It was more intense than a regular relationship. When I would take certain pictures it would be hard for me to tell if it was her or me.

So this is perfect! Merritt has found a way to make love with herself while she documents herself documenting the experience! It should be noted that the sexual activity in the photographs is fairly tame. Although Merritt's sex life is perhaps wilder than yours or mine was last weekend, the activities she's documenting seem too "clean" somehow. The book even contains a self-portrait of man apparently peeing across her breasts, but the act looks as hygienic as an ad for a ritzy health spa.

Are there things that are too pornographic for you to photograph?

Let's see, well I was driving around in a car with tinted windows through the ghetto filming various scenes. And zooming on people. It was pretty fun.

[Incredulously] In the ... ghetto?

In the quote ghetto. I was trying to find a bad neighborhood in Manhattan.

I've lived in New York City for more than 20 years and haven't heard the word "ghetto" since Elvis sang about it. Where on earth did you go?

I ended up in these projects on 30th near 10th. [I don't tell her that those projects don't constitute a ghetto.] They were pretty doggy. That was interesting. [Pause] I don't really understand the question.

I wanted to know what neighborhood you were in.

I understood that one. But the one before. You just want to know what else I like to photograph?

Whatever I find sexy.

How do men react to your photographs when you're with them? Do they get self-conscious or do they get into it?

I dunno. Men in general?

No, no. The particular men you were with and photographed.

They were always into it.

You very seldom photograph their face. Was that your choice?

So many people read into that so much. There's absolutely nothing to read into that. The men weren't just tools. It wasn't only about their body. There were model release issues. I'll do what it takes to make someone feel comfortable as far as my photographs go. If they don't want their face to show, I won't show it. It's not always necessary to show someone's face or their full identify. That allows people to be more comfortable in front of the camera.

What about the photograph of the guy grimacing in orgasm?

That was my ex-boyfriend. That's the man I will always love. He had an orgasm right there. It was dark in the room.

Were you waiting for that moment?

I just had the camera next to me. It was dark and I grabbed it, grabbed the picture. No, I wasn't waiting for it; I had given up. I'd been trying to do it for a while. But it's too hard to do. For me to photograph anything sexual, there's always love going on. It's always something that I'm emotionally involved with as well. I don't like photographing other people sexually for the sake of photographing them sexually. Otherwise the photographs suck.

On Page 212 a guy with a pierced tongue is licking your face. You were in love with him?

No. Can't you see it in my face? That's the whole thing. That's very perceptive of you. That's what was going on. I broke up with my boyfriend. I couldn't get into another relationship quick enough to photograph it.

Your photographs are intimate, but they're not intimate communications between two people.

That depends. The whole first chapter is very intimate with a man. Just because they're blow jobs doesn't mean they're not intimate. I think they're very intimate. That two-page photo of his dick is a total image of emotion and evolution and communication even though it's the penis. That was all out of love. There's no way I could be with someone that intimately without totally loving them.

Why did you break up?

I know. I'm saying that those years you spend with someone, you just need to move on. Breakups happen. We were living together. I just needed to live on my own. I went from living with my mom to living with him.

What does your mother think of your work?

My mom is cool. I don't really know my father too well, but my mom is cool. It's definitely growing on her. She wasn't off the bat in love with every photograph. She had some issues. She's been very, very supportive and amazing. I'm sending her some prints to put up in her house.