My ileostomy scar has healed, but I still feel like my insides are on display. 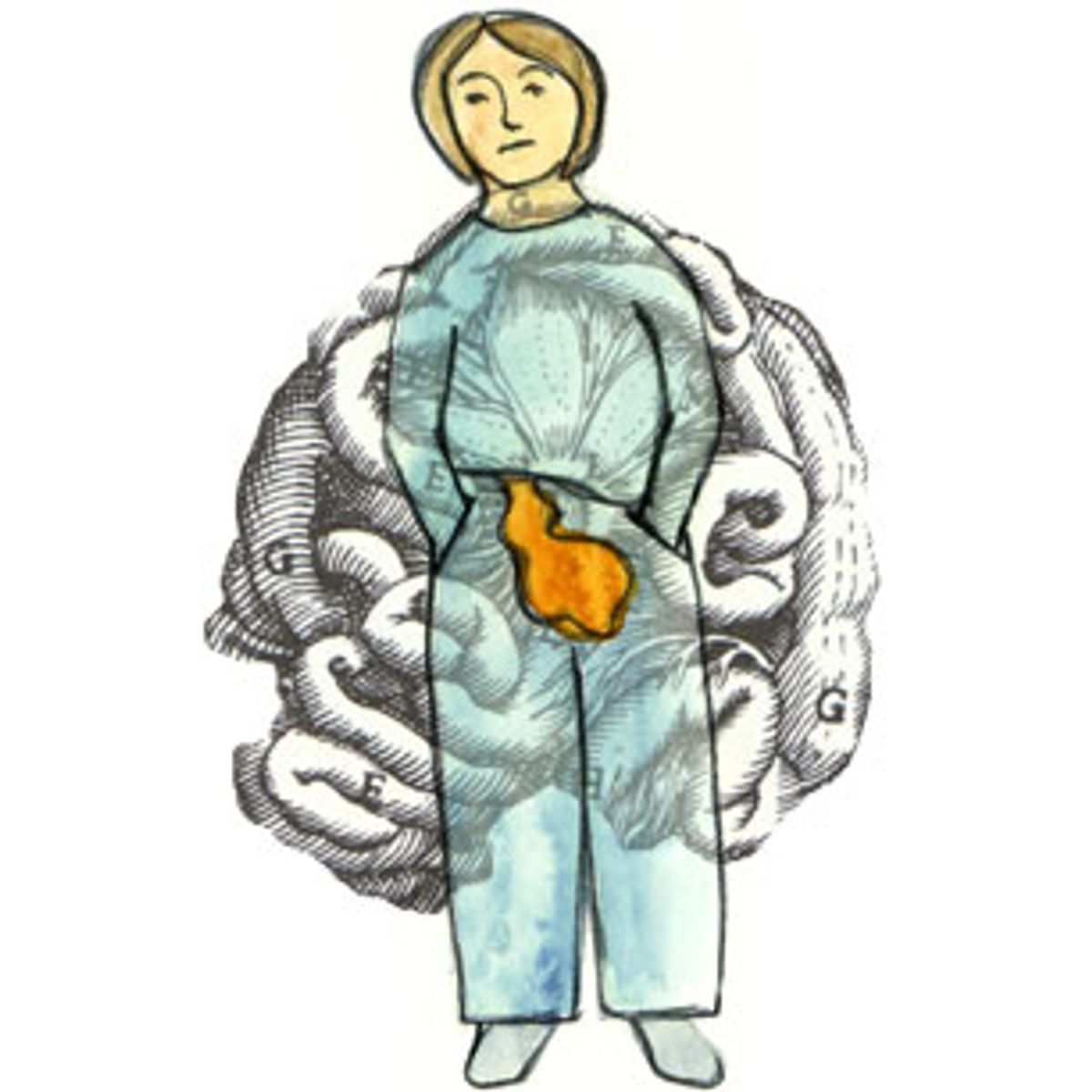 At the veterinary school on the campus of Cornell University, there is a cow with an 8-inch diameter hole cut out of her. By unscrewing a plastic cap where her hide is cut away, students can see into her stomach. When I was 25 and in my first year of graduate school in the English department there, we all climbed down into the gorge, walked over the wobbly, suspended bridge and went to the school for a look into the cow. At my turn, my eye squinted through the opening and my finger traced the line of her digestion in the air. "Look how she goes!" I thought. I had no idea that my own inward functionings would soon be on display.

One morning that same year, I woke up with an ileostomy, a 10-inch plastic bag -- the kind you would use to store vegetables in the freezer -- hanging from the right side of my belly. But this one was for collecting waste. I had been in the hospital for more than a month with ulcerative colitis, an inflammation of the inner lining of the colon. My large intestine had grown like rising bread, until it became mega-toxic, on the brink of explosion. The night my stomach became so hard that to rap on its surface would yield an echo of knocked wood, the surgeon came in and marked a spot where the bag would attach. He used a plain old Bic pen to make an "X," and I got wheeled quickly into the operating room.

He and his harem of students took out my large intestine, pulling an inch of the small intestine -- the ileum -- out of my abdomen, so much thread through dense fabric. They created a stoma, an opening in my abdomen wall. With a plastic clip on the end that I could clamp and unclamp for draining, the bag would stay there for nearly a year.

I woke up from the surgery woozy from the morphine and the pain that seemed to cut me in half. I looked at what had become of my body and felt a wash of grief. And then I thought of that cow. It was as if I had become her, pried open by doctors while students gaped at the spot where my hide was cut away.

There were a million things I had to remember so as not to become a public freak show. These tasks were manifold and cutaneous-like in their layers. Beneath the surface of my coverings, it began with making absolutely sure the bag was secure, a surprisingly long and complicated process. For one, I needed to find a flange -- a card-like square that stuck to my stomach, attaching to the bag -- with an opening the exact size of my stoma, an impossible task. Apparently, small intestines are as different from one another as shoes, and I had the most narrow and Italian of ileums. So I had to cut out a circle in the flange both large enough and small enough to slide the ileum -- that slippery, wiggly worm -- through it. Before sticking the flange to my skin, I needed to sprinkle on a special powder to prevent irritation and infection. Too much, and the bag would not stay stuck; too little, and a galaxy of red dots -- a reaction to the unbreathing material -- would splash across my stomach. Then there was the putty, essential for securing the flange in place so that no seepage occurred (though a leak could spring up as well from the bag's bottom, where a plastic clasp folded and clamped it shut like a toothless jaw).

To make extra sure, humiliation always at the forefront of my mind, I took long strips of flesh-colored tape, more the color of a bright Barbie-pink, and strapped them along the flange in the shape of a square. In addition to being expensive and not covered by insurance, this get-up was especially uncomfortable in the sticky humidity of New York in late August, and it hindered any kind of physical intimacy with another human being. I was already on the outs with my boyfriend when I went to the hospital. When I got out, I couldn't bear to be with someone who had seen my body before it had been sliced open. But it wasn't entirely the fault of the ileostomy, that wicked stepmother I would have liked to blame for everything. Truthfully, sex had become a sadness that was easier to avoid than endure.

As part of their campaign to convince me that my life would change very little -- hardly at all! -- from having an ileostomy, nurses told me brightly, "You can wear whatever you want, honey." But I found I could not. Jeans or trousers with waists that had once hung on my hips now rubbed against the stoma, irritating it. Pants that clung to me, flush with my stomach, rose as the bag (horrors of all horrors) filled, also increasing the chance of its balloon-like breaking. There was no way to wear skirts in the summer -- without stockings or tights, the bag would slap against my leg, which sounded to me like a screen door slamming shut as I walked. Or worse, it would hang between my legs when I sat down: a bizarre, dangling sensation.

Those nurses said, "Of course you can swim!" But how? A bathing suit? Forget it. One day, a group of us went to the reservoir -- another big Ithaca, N.Y., attraction -- and I sat happily on the beach in shorts and a T-shirt while a foray of graduate students jumped and splashed into the water. It was muggy, and I soon began to feel sorry for myself. Mournfully, I waded into the water, my toes pointed with longing.

A semicircle of my fellow graduate students treaded water around me and yelled, "Come in! Come in!" My resistance was low from the thick humidity, from my teenage-like inability to shirk peer pressure and from the fatigue that had overtaken me no matter how many hours I slept. Finally, I dove under. What I recall was something I had not felt since that haze of post-surgical morphine, which was a perfect, closed-off world. It was lovely, embryonic. And then I felt a pull out of that world coming from the right side of my abdomen, which I soon realized was the stretch of glue and tape coming loose, and the bag's subsequent filling with water.

"She's in!" everyone clapped as I came up for air, my clothes drenched and clinging as I stood in shallow water. But I saw the eyes of most gazing down. For yet another audience, I had become that vet school cow; everyone was dying for a look in. And who could blame them? Many of us had learned from Zola earlier that semester how the impulse to slice another open to understand what makes us work -- to see who we, each of us, are -- is human nature. In that moment, however, I was filled not with empathy but with plankton-rich reservoir water and a longing, as well, for one of Zola's trains to run me down as I turned to walk the trail back up to the road toward where I lived. Behind me was a terrible stillness, a hush of voices not broken even by the smallest swoosh of a hand drawn through water.

Despite all my attentions to practical concerns, there were more accidents than I care to relate. In particular, a dreadful lunch with two fellow students, where I had not properly secured the clasp at the end tight enough and it came undone. I felt a brief tickle -- a signal that the stoma was spewing -- only it was not doing so into the bag. Even the cow was able to maintain some self-respect, I imagined, as I sat, French fry frozen in mid-air, stunned into utter stillness by the warm rush down my leg.

That cow stood in a field, looking out at the healthy bodies of the other cows. Was she cognizant of her difference? Unfortunately I had a mirror, and looking into its full length was startling. I had lost a good deal of weight as a result of the disease and, due to the steroids, my face was now a round, pocked moon. Staring at myself, I would wonder at who the skinny girl in the mirror with the huge incision slicing through her belly button on down, a bag attached at her hip, actually was. Lying in bed at night, the putty pulling against my skin, the loud sound of my own digestion sighing and snorting out into the evening, I thought: This cannot be me. Often I wondered would I ever get back to myself, and who that actually was.

Of course I would never get exactly back, and perhaps this was a good thing. I would always know the way in which a body can just simply break, no matter its age, size, intelligence, class or color. Three operations later, the only physical memory of the experience remains in a foot-long scar that bisects my abdomen, and a small, circular mark the size of a thumbprint and the color of an almost-healed bruise where the small intestine once emerged. And yet I am constantly reminded that I am not the same. So many have peered in. It's as if I'll always know that, at any moment, anyone can see through me.

I have gained weight and strength back, but I will never lose consciousness of that frailty. I've become klutzy with carrying the knowledge of what is breakable. In spite of my surgeon's insistence that the small intestine contains no nerve endings (there's no gut feeling? Hmm ...), I am convinced that the expelling of waste into the bag once registered as a slight tickle at the stoma's opening. I am sure of it -- the tingle would often, oddly, make me giggle. Though it has been four years since I've had to wear an ileostomy, sometimes the sense is still there, like fingertips just barely touching skin.

When I experience it, there is that brief moment of alarm -- will the bag break? Will I have another accident and be disgraced by myself once more? I look around in wide-eyed panic for the semicircle of my peers and doctors to watch me function, the way we once stood around pointing, our bodies leaning in, to that poor fistulated cow.

With that tickle also comes the horror that the reconstruction never happened. Perhaps I only dreamed the way the surgeon and his students went in again to pull the small intestine back inside. For an instant, I will always wear an ileostomy; it will forever mark me with a slap on my leg, a shameful sound from within, a barrier between me and an opaque world.

After the subsequent relief that comes from realizing that these sensations are only hauntings, there is also a tiny pang that, as awful as it was, it was not all bad. After all, I recovered with a rare glimpse at the very mechanics that make me tick and breathe, what others can only see when stooped beside a freakish cow in upstate New York. When I feel that faint and distant tickle, I am almost sad for what is now gone, not for the loss of that once-vital organ, but for the space it allowed me to see inside.