Jeff Stark and Stephanie Zacharek discuss the new album from Sleater-Kinney, the band that wants to take over the freaking world. 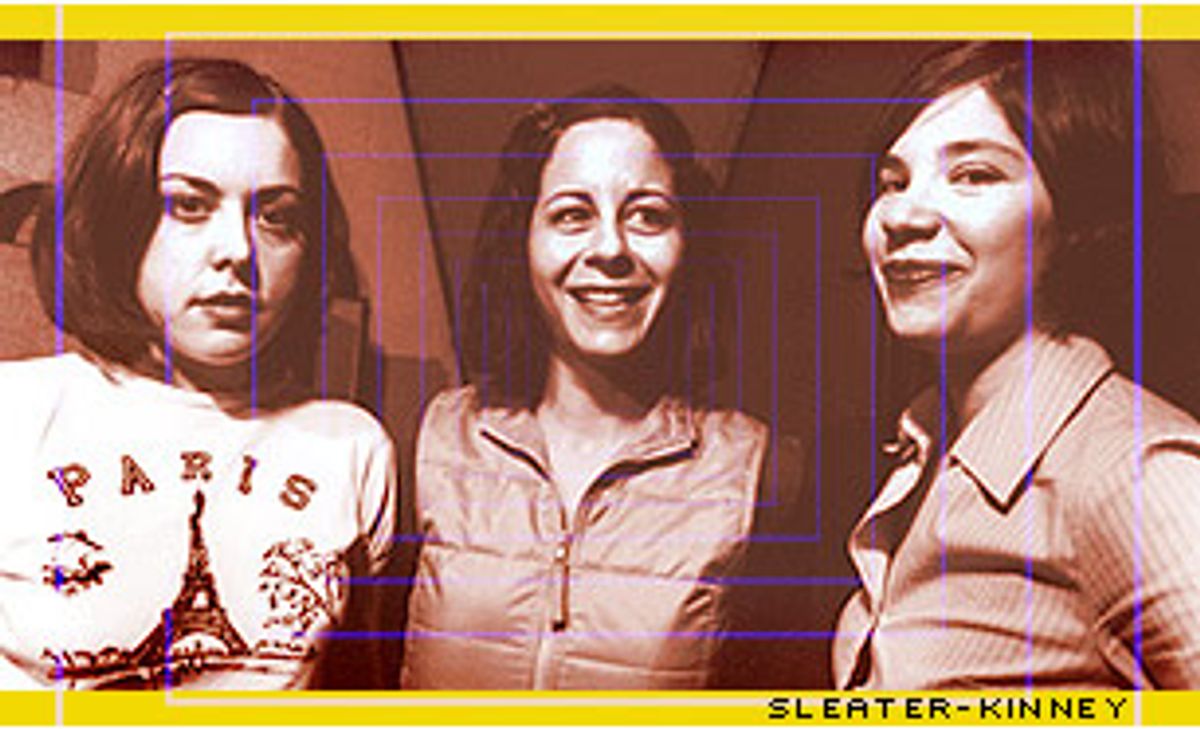 That's sort of a bullshit sentence. I wrote it because reviews like this, about bold, important rock bands, are supposed to have bold, declarative openings. The lead is supposed to be forceful and opinionated, with a tone of grand importance. I'm making, you know, a pronouncement.

But it's bullshit, really, because I'm sort of posturing, as if I'm the first person to say that these three women from Olympia, Wash., represent a sort of last-ditch effort to save a fading form that has been at the center of nearly every positive cultural change in America for the past 50 years. As if. And even if it were true, with all of the fanatic critical support the band riles up, I'm just one more dork with bad posture and a word processor saying the same thing as all of the other dorks. At this point, I'm even repeating myself.

But this is the occasion, and this is why I'm making absurd pronouncements about rock bands: Sleater-Kinney has a new record. It's called "All Hands on the Bad One." It's their fifth since 1995, and the third that features Janet Weiss drumming behind singer-guitarists Corin Tucker and Carrie Brownstein. It's great. There are a couple of moments -- the hand-grenaded last 15 seconds of "Ironclad," singer-guitarist Tucker's wail on "Youth Decay" -- that are as ferocious and powerful as the band, almost any band, have ever recorded. That sounds a bit overwrought, but man, there's no other way to convey the roar. It's a kick to the chest, a shot out of a cannon, a hit that feels like a kiss. It's something violent and visceral and huge and all that's good about rock.

Stephanie Zacharek: I'm all for bullshit sentences when they speak the truth. What gets me about Sleater-Kinney, over and over again, is how they're regenerative without being regurgitative. In songs like "Ironclad" I can trace threads to Eddie Cochran and X-Ray Spex, and probably dozens of performers before, between and afterward. One of the great problems of life as I see it is that when you've been listening to (and loving) rock 'n' roll for a long time, at some point you're likely to come up totally bored by everything, convinced that there's nothing new under the sun. And you don't need to be a dork with bad posture and a word processor (Word processor? I forget if that's a wind-up thing, or if you actually plug it into the wall) to reach that saturation point.

I try hard to fight that, but with Sleater-Kinney I've never had to fight it. I feel 20 years younger every time I put on a Sleater-Kinney record. I can't think of any voice in modern pop music that compares to Tucker's. And the funny thing is, with each successive record it actually sounds better -- she's more and more in control, and her harmonies with Carrie Brownstein just get sweeter and sweeter -- without necessarily sounding more refined. In other words, she's finding ways to enrich her vocals without completely stripping away the scraped-raw quality that was there at the beginning. She's more in control of her vibrato, instead of sometimes almost letting it run away with her. And Brownstein never ceases to amaze me, with those pointed, finely formed little guitar motifs -- instead of being fancy (and there are plenty of guitarists who are all flash and no feeling) she always simply knows what to put where, a more rare skill by far.

Stark: I've always been impressed by the way Sleater-Kinney have been able to find language for hoary ideas (not to mention a new way of playing intertwining guitar lines against those back-and-forth vocals). For example, there's that great line in the song "Dig Me Out" that goes, "I have your heart, your holes." I always thought those words were an amazingly subtle way for a woman to talk about a relationship with her female lover. And then there was a line about "manufacturing hearts" that got right to the center of two of Tucker's favorite topics: relationships and the nuts and bolts of the industrial world. (On "Call the Doctor" [1996], she wrote about medicine; "Dig Me Out" [1997] went to factories; "The Hot Rock" [1999] targeted computers.) I guess what I'm trying to get at is that Tucker, who writes most of the songs, has never been particularly obvious. That's a good thing.

Zacharek: No, she's hardly obvious at all. But I never feel that she's willfully obscure. There's that line on the new album, "If you wanna watch me chew/My teeth are cutting you out." Can't get more direct than that.

It's funny, though, I never would have made the medicine/factories/computers parallel with those three other records. Now that I think about it, I can see it. I think Tucker is fascinated by all those things, though I never assigned those attributes to individual records. For instance, there's that gorgeous song on "The Hot Rock," "The Size of Our Love," about watching a loved one die.

Stark: But "All Hands on the Bad One" is flawed, too. There are a couple of tracks that seem like bad songs for an all-female independent band to be writing, and they're mostly songs about being an all-female band that does things, you know, independently ("The Ballad of a Ladyman," "#1 Must Have" and lines in "Milkshake and Honey" and "Male Model"). There are also songs about fans, and being a fan, which are great, because they've done those songs ever since "I Wanna Be Your Joey Ramone," but bad because they say things like, "This music gig doesn't pay that good/But the fans are all right." For the first time, I'm kind of worried.

Worried, because the last record, "The Hot Rock," smoked but never really caught fire. (The drums were buried and there were only two or three songs -- "The End of You," "Burn, Don't Freeze" -- that had the magnitude of any from their prior two records.) Worried, because I don't want Sleater-Kinney to ever be complacent. I want them to lead, inspire, catalyze the only thing that rock has left, which is the all-girl revolution that rallied with Patti Smith, Liz Phair and Bikini Kill, but never toppled the despot.

Zacharek: Well, I'm older than you are, but even in my advanced state of decrepitude I think there's time yet to topple the despot. And I think it can be done by coming on like gangbusters -- as Sleater-Kinney do. But I also think that there are benefits to plain, old-fashioned stealth. All those crappy bands that make heaps of money -- Limp Bizkit, Phish, No Doubt -- or even well-meaning bores like Jewel, or sincere, flamboyant bores like Tori Amos, I don't think any of them see Sleater-Kinney as a real threat, even now, with all the praise the band have earned.

Which is one reason Sleater-Kinney's more self-referential songs, about being an all-woman band, excite me more than they bother me. My God, this band wants to take over the fucking world! I kind of thought so the first time I saw Brownstein up there on stage, standing with her legs splayed and yet looking completely feminine in the best sense -- you know, a little like Keith Richards in a button-down oxford. Weiss gives the lie to the dopey idea that women can't be great drummers because of limited upper-body strength. And Tucker -- well, I feared for her vocal chords the first time I heard her, I thought surely she'd just rip them to shreds. These girls just meant business.

But back to "All Hands on the Bad One." This is the sound of a band with a very certain sense of their place in the world. There's that line from "Male Model": "History will have to find a different face/And if you're ready for more/I just might be what you're looking for." It's not so different, really, from the sexual boasting of blues performers, a tradition that's as old as the hills. Or the cockiness of jazz musicians challenging each other to "cutting contests" -- one doing his damnedest to outdo the other. We're not all that used to hearing women doing it.

I guess if they're still doing it a lot on the next record, I'll be more worried.

Stark: The thing is, right now Sleater-Kinney aren't part of any real movement, mostly because the original riot grrls from which they sprang were smart enough and self-conscious enough to stopgap whatever they'd started before it dumbed down into parody. That shouldn't be a problem, of course, because great art is great art, but I'm worried about it. Because rock teaches us the same lessons over and over again, and one of them is that the iconoclasts get brushed aside for far too long, while those who figurehead something bigger than their own band get rich and famous.

And the thing is, I want Sleater-Kinney to be rich and famous. I want them to win, to make a difference. And I think they do too. "Now is the time to invent," screams Tucker on "#1 Must Have." Yeah, of course, but why not just do so?

Zacharek: Yeah, but see, I'm not so sure that the iconoclasts necessarily do get pushed aside. OK, they do if you're talking about Captain Beefheart. But what about Bob Dylan? There's a case of an iconoclast striking a chord with a huge number of people. It kind of defies the odds, but there's no denying it. And I wonder if Sleater-Kinney can't have it every which way, too -- maintain their dignity and their originality, but also figure into something much bigger. And make lots of money.

I understand why that line, "Now is the time to invent," bothers you -- it does sound like Tucker's making too many announcements about what should be done. I loved riot grrl, and the idea of riot grrl. And like you, I was glad that as a "movement" it just slipped off the horizon instead of turning itself into a joke. But I can't say that it spawned as many great girl bands as I'd hoped. I think its influence is still out there in a big way, certainly with Sleater-Kinney. But Sleater-Kinney is still the one band you point to when you're looking for an all-woman band that actually devoted some time and care into really learning how to play.

Not that knowing how to play is everything. Good Lord, over the years enough boys have gotten away without knowing how and nobody ever complained. But when somebody just sounds better and better with each subsequent record, as Sleater-Kinney do, you do get the sense that they're devoted to what they're doing. It isn't just a pose, or a way to get girls, boys, whatever. Nothing wrong with any of that, but you want the records and the live performances to sound good too, right? And I never feel that Sleater-Kinney let down their half of the bargain.