The shape of dreams

Freud called them the royal road to the unconscious. A hundred years later, the debate over what they mean goes on. 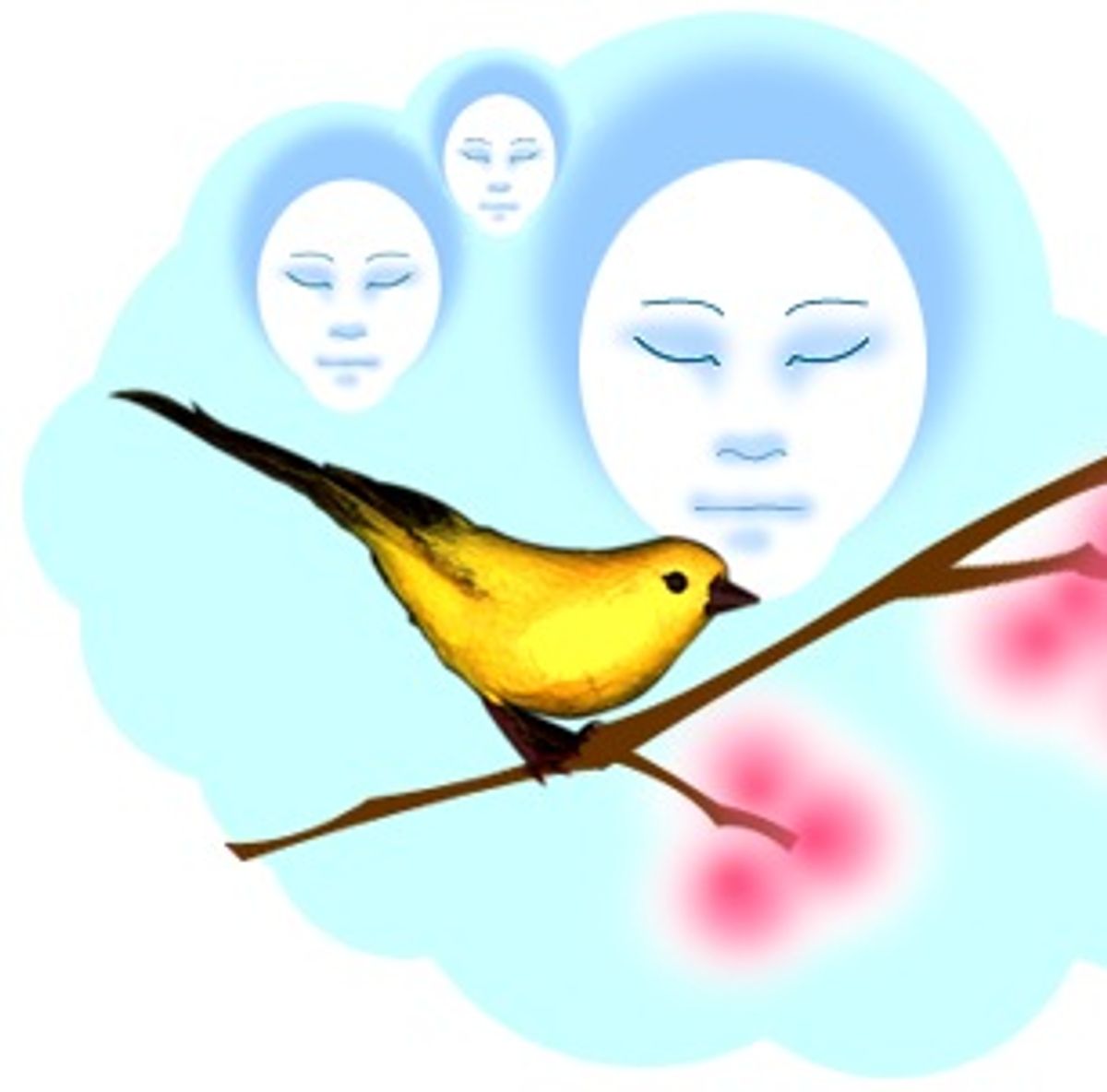 Talk of dreams dominated my family's breakfast-table conversation. My father was deeply interested in dreams and not squeamish about regaling us with accounts of his nocturnal visitations. As we ate our porridge, he shared his latest with us; along with the usual Oedipal stuff, a recurring favorite of mine involved fishing from the balcony of our house, which led to various Pinocchio-like encounters with sea creatures whose bellies he escaped from to describe in minute detail.

In turn, he encouraged my brother, my mother and me to disclose our dream lives. I worked hard at remembering mine, embellishing and even, on occasion, inventing dreams outright. But none of us could keep up with my father. He was an auteur on a par with Stanley Kubrick or Charlie Chaplin; next to his, my dreams seemed like late-night TV reruns.

What strikes me in retrospect was my father's absolute conviction that dreams have meaning. The skeptics aside, for much of this century my father has been in good company. The man he had to thank, of course, was Sigmund Freud.

This year marks the centennial anniversary of Freud's epoch-making "The Interpretation of Dreams." (The actual date of publication was November 1899, but Freudian myth has postdated it to 1900.) In commemoration, scholarly works and a new translation of Freud's magnum opus have been published. Universities, institutes and museums have held conferences to probe Freud's legacy. These events have reignited the debate around dreaming that has burbled among science, psychology and popular opinion for the past century.

The arrival of Freud's dream book in central European bookstores launched psychoanalysis upon an unsuspecting world and turned most of us, even the deniers among us, into dream interpreters. "In a sense Freud has himself programmed the way we dream or, at least, the way we remember our dreams and infuse them with meaning," says Avital Ronell, a professor of German literature at New York University.

But will we continue to be hung up on dreams in the next century? Or will we simply tire of the hard work of dream analysis? With all the sleep-suppressing pharmaceuticals we ingest nowadays -- both legal and illegal -- will there even be dreams left to interpret in the future?

At the forefront of the so-called Freud wars of recent decades is the question of whether dreams have meaning. Neuroscientist Allan Hobson of Harvard first leveled the charge that dreams are simply random neuronal events in the 1970s. He has continued arguing this point ever since, though his position has undergone modifications.

"Most psychoanalytic dream theory is obsolete," Hobson tells me in the hearty voice of someone who enjoys a good scientific quarrel. "The idea that Freud's dream theory is alive and well and only needs a little jiggering is absurd."

It's not that he believes dreams are meaningless. Hobson records his own dreams and discusses his patients' dreams with them. But where Freud dethroned the conscious self, Hobson would like to restore it to its rightful place.

"Dreams are loaded with meaning," he says. "It's just obvious meaning, not repressed or censored. You don't need to go around decoding them; the deep motives are right on the surface."

Other researchers have launched a counterattack. While their findings are not conclusive, they point to a growing body of empirical evidence suggesting that dreams are meaningful in ways not accounted for by Hobson.

"If you show a man a circumcision film before he goes to sleep, he will dream about it," says Steven Ellman, a professor of psychology at the City University of New York, a psychoanalyst and a sleep and dream researcher. "That," he adds dryly, "is not random neuronal firing."

Ellman's research on REM (rapid eye movement) sleep suggests that dreaming is not just epiphenomenal but a form of unconscious processing -- that it works through emotionally laden content not immediately accessible to the conscious mind. Other researchers have used neuro-imaging techniques to demonstrate that REM sleep activates regions of the brain associated with memory and feeling.

As a psychoanalyst, Ellman sees dreams as a point of entry into a patient's inner world. At the same time, he does not feel that dreams represent, as Freud put it, the royal road to the unconscious. In the place of dreams, the idea of transference (the relationship between patient and analyst) has become the primary means of unlocking the unconscious.

Other psychiatrists agree that the status of the dream in psychoanalysis has been subtly downgraded. In part, this reflects the economic realities of managed care. Less money means fewer sessions and more emphasis on psychopharmaceuticals -- many of which, including antidepressants, suppress REM sleep. The upshot is not just less time and money to devote to dream analysis but fewer dreams to analyze.

George Makari, a psychoanalyst and director of the Institute for the History of Psychiatry at Weill Medical College of Cornell University, still feels that Freud's ideas offer the most comprehensive model for understanding our inner life. Yet he's cautious about the reliability of dream work.

"This is the movie you directed, whether you like it or not, and pursuing dreams in this manner can make for startling encounters with oneself. But," he adds, "the interpretation of dreams can only usefully occur with a great deal of context."

Popular belief in the validity of dream interpretation -- whether Freudian, Jungian, "Eastern" or otherwise -- seems stronger than ever. A glance at any bookstore psychology section reveals a plethora of books on dream analysis, glossaries, dictionaries and guides to dream symbolism. On the Ask the Dream Doctor Web site, one can submit one's dreams for instant interpretation (at $20 a pop) and read the "Teen Dream of the Week." On the Dream Lover Inc. site one is told, "All dreams are good dreams!" The International Institute for Dream Research is amassing a "dreambank" from visitor submissions.

Clearly the way we think about dreams has changed over the past 100 years. But have dreams themselves been altered by changes in sexual consciousness or the mass media? Has the sheer glut of interpretations domesticated our dreams, robbed them of their strangeness?

Makari doubts it. Sure, the content of our dreams has changed over time, like the content of delusions -- which have shifted from 17th-century witches to late 20th-century surveillance systems. "Does this suggest the mechanism of delusion formation has changed?" Makari asks. "I think not. So, too, for dreams."

Yet the primal conflicts expressed in dreams are ultimately just as powerful as ever, Moskowitz believes. In other words, it's just as horrifying now as it was 100 years ago to dream about killing one's father or having sex with one's mother. Thus there is a disincentive to dreaming -- one heavily tapped into by the modern psychopharmaceutical industry. The Prozac nation doesn't dream as much the Freudian nation, and that may be part of the attraction of drugs.

Where, finally, has all this talk about dreams gotten us? Has it brought us closer to insight into our selves and our inner demons? Or has it made us, simply, connoisseurs of dreams -- and, for the more squeamish among us, eternally condemned to listen to others speak in the voice of their innermost narcissistic being, without even receiving an analyst's fee for our troubles?

From a distance of 15-plus years and several thousand miles, my father's faith in the meaningfulness of dreams now seems one of his more endearing qualities. It was futile to contradict him, as I once tried to do. Nowadays, I try to remember my dreams. But the morning ritual -- the divulging of those dreams -- is one I don't miss. I'm pretty sure that Freud himself would have blushed to find himself a guest at my family's breakfast table.