At "6-foot-1 and worth the climb," the star of Playboy TV's "Sex Court" is Hollywood's queen of the B's. 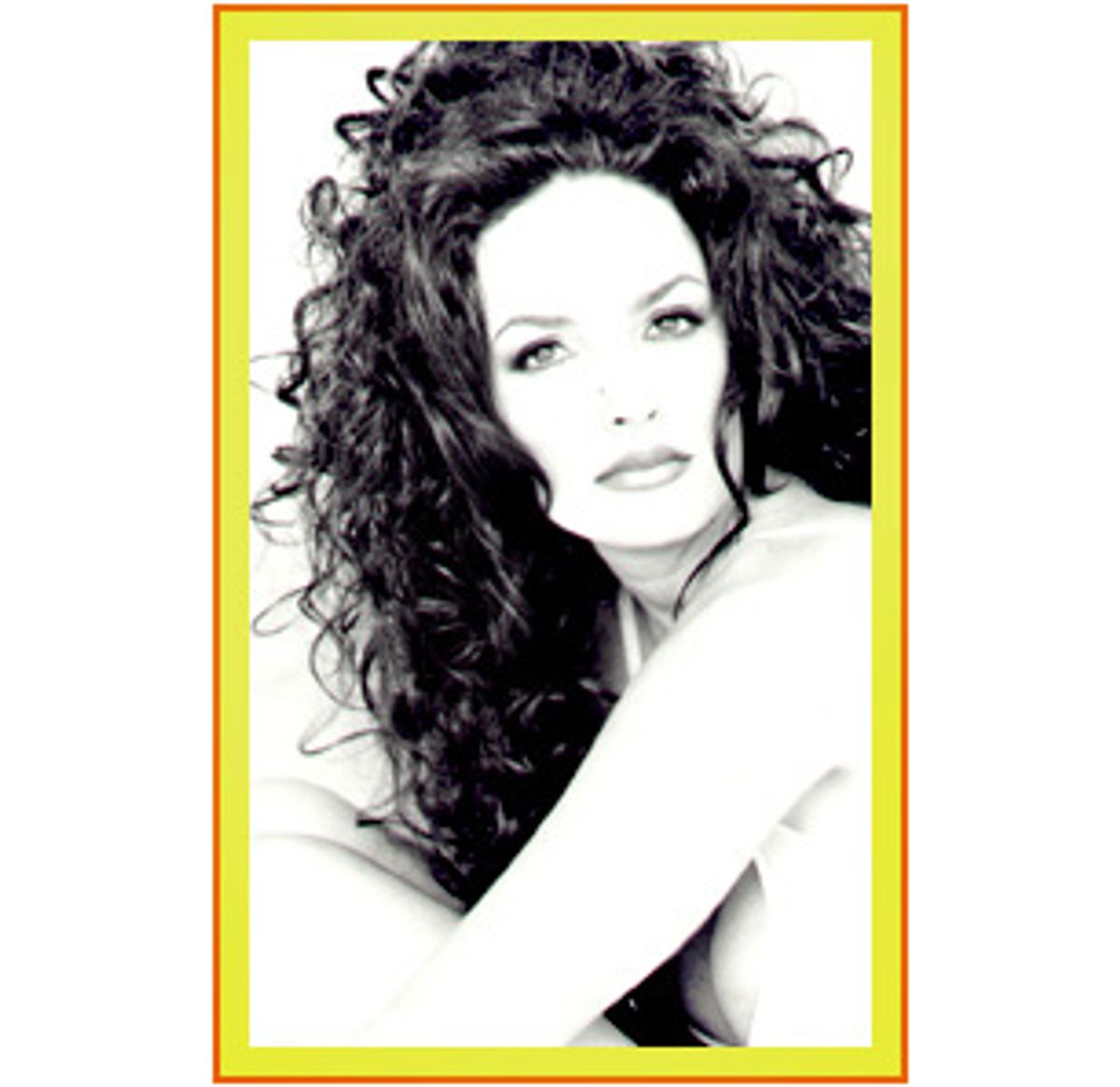 "I order you into my Judgment Box to have sex with your French maid while your wife is forced to watch!"

They say justice is blind. If so, it's going to miss out on all the action on the first and third Fridays of the month when new episodes premiere. The campy half-hour romp parodies those lame-o "People's Court"-type programs by forcing warring plaintiffs to get naked and get busy after their cases are heard. This way, unlike in the real justice system, everyone's a winner.

The stories are real, but with actors usually portraying the litigants. In the case cited above, a studly lookin' husband had brought his wife before the bar of justice, claiming she was sabotaging household appliances in order to get repairmen in the sack.

Finding for the husband, Judge Julie declared turnabout to be fair play, and ordered the hubby to do the nasty with Fifi the French maid. Ooh-la-la. Wifey was forced to watch, but not for long. Soon the clothes were flying and everyone ended up in a pile of sweaty, Hollywood flesh.

The title of the episode? "You Can't Shag Good Help These Days," natch. Other episodes include: "The Internet In and Out," "Dr. Spreadem," "Do the Math, Teacher" and "Unidentified Flying Orgasm."

Consider it an X-rated "Jerry Springer" or "The Rocky Horror Picture Show" meets "Ally McBeal." In either case, consider it a hit. The show's got a buzz going for it -- due in no small part to Scream Queen Julie Strain's outlandish, Goth-grrl magistrate.

"I'm a real-life warrior," Strain explains between takes at the "Sex Court" studios in Culver City, Calif., as she and Playboy TV bang out an entire season (so to speak) in just four days of shooting. "I'm strong. Women wanna be me. Men wanna fuck me. I've created this dark, looming vixenous character. Who else is there? Other than Lucy Lawless, maybe."

"I'm 6-foot-1 and worth the climb," she adds, cocking an eyebrow. "If you get tired, you can rest halfway."

Before I get a chance to take Strain up on the offer (or faint), she's off to oversee the next episode, "Roses Are Red, My Balls Are Blue," in which a boyfriend takes his girlfriend to court for holding out on him after six months of going steady.

The next time yours truly caught up with the Queen of the Bs, she'd sneaked into a closet stocked with "a blow-up doll and a bunch of whips" at the home she shares with husband Kevin Eastman, creator of the "Teenage Mutant Ninja Turtles." (Please forgive him.) Seems Strain's hiding from the cast of her next movie for the schlockmeisters at Troma Studios, so she can get some quality time in with her cellphone.

"It's called 'Soul Stripper,'" she says in a half-whisper. "And I'm the producer. We're in the middle of it right now -- blastin', grindin' and killin'."

So what's it about?

"Oh, it's about this stripper who turns into a monster that's eating people's souls. Usually a victim is having too much fun at the strip club, and the monster comes in, takes the odor thing from a urinal, stuffs it in the guy's mouth and decapitates him. Pretty brutal stuff. I'm an undercover cop, and my husband's been killed by the monster. So she and I go toe-to-toe."

Strain's done over 100 similar gore-laden sexploitation flicks since she first came to Hollywood in 1989 after being discovered in Vegas by a talent scout at the Sugar Ray Leonard-Roberto Duran title fight when she was 27 years old. Most have been films like "Bikini Squad," "Lingerie Kickboxer," "Guns of El Chupacabra," "Bimbo Movie Bash" and "Return to Savage Beach" -- all of which have made good use of Strain's impressive physical assets (38-26-36 on a long-limbed, muscular form that makes bodybuilders lick their lips).

OK, so there've also been bit parts in "The Doors" and "Bugsy." But for the most part, Strain's happy as a clam in the B-movie underground.

"I'm very content to stay in Hollywood High School the rest of my life and be prom queen every year," says the 38-year-old, raven-haired beauty. "I don't want to go out and compete with the big fishes. You have to babysit the A-movies for about two years after they're done. I think that kills your creativity. Who wants to relive the same sentence day after day? It's more fun as an artist to dive into something else."

That's not sour grapes on Strain's part. Because, to paraphrase a line from "SNL" legend Garrett Morris, B-movies have been berry, berry good to her. Strain's career really took off in 1993 when she became the Penthouse Pet of the Year (in some of her films, you can still see a golden Penthouse key around her neck). After that, the celluloid underworld depicted in the 1998 documentary "Some Nudity Required" (in which Strain appears) became her playground.

In this cheesy, sleazy and slightly lumpen alternative to traditional Hollywood, the movers and shakers are the Roger Cormans, Andy Sidarises and Jim Wynorskis who pump out the sex-and-violence-laden, made-for-cable/straight-to-video masterpieces like so much greasy sausage.

The stars of these films aren't the thin, sickly starlets Tinseltown loves to throw at us, like Gwyneth Paltrow, Calista Flockhart or Cameron Diaz (pee-yew). Instead, they're busty, lusty, kick-ass broads like Shannon Tweed, Julie K. Smith and Strain herself.

Yep, Strain's come a long way from her days as a tomboy athlete in Concord, Calif., where as a geeky, 6-foot 13-year-old she had few dates and a lot of time on her hands.

"I mostly hung out with the stoner group," she says. "We'd cut class in our Camaros, run around, get a six-pack and cause some trouble."

Strain played basketball, competed in track, rode horses, worked out and dreamed of being a model.

"You can be so close to a big city, yet so far," Strain remarks of her home town, just 35 miles outside of San Francisco. "I read magazines like the Star and the Enquirer and was in love with the glamour -- the Sophia Lorens, Brigitte Bardots and the hot chicks like Raquel Welch. I visualized and kept the dream alive by copycatting those sex symbols."

After graduating from Diablo Valley College in Northern California, she worked as a personal trainer. Then a freak horse-riding accident almost snapped her neck, leaving her with a broken arm and ankle and a severe case of amnesia.

It took months of therapy for Strain to relearn her ABCs and overcome the physical trauma. Her fateful trip to Las Vegas was part of an effort to recover through rest and travel. Of course, it was in Sin City that she was discovered by a talent scout. She then moved to Hollywood, began doing pictures, became Penthouse Pet of the Year and started her climb to the top of the B-movie heap.

That regal position should be further solidified once "Heavy Metal: F.A.K.K. 2" hits theaters this July. The long-awaited sequel to the animated 1981 flick "Heavy Metal" stars Strain as the comic-book heroine F.A.K.K. 2 (Federation Assigned Kinogenic Killzone -- don't ask) who's on a mission to avenge the destruction of her planet by the forces of evil.

With a F.A.K.K. 2 video game due out in September as a followup to the film, that bee-ahtch Lara Croft better get her butt to the curb. Julie Strain's takin' over, baby, and a generation of sci-fi lovin', mammary-obsessed suburban teenage males may never be the same.

Why Strain? Why do young men fantasize about warrior queens who can slice them in half with a sword or screw them into oblivion with equal dexterity? Hey, why not?

Strain-mate Kevin Eastman fulfilled every fan's dream when he met the star at a signing for her fan club at L.A.'s Golden Apple Comics. By her own admission, Strain threw Eastman in her pickup and drove off with him. Sweet!

"I was attracted to his innocence," she admits. "He looked like he'd never been with a hooker or to Vegas. I was like, 'All right, I can train this one.'"

Eastman, you lucky dog, you. Not only did he bag an über-babe (or was bagged by her), he got a woman her directors and costars all testify is one of the nicest folks in Hollyweird.

"I'm a movie star more in the eyes of other people than I am to myself," she says. "I'm just a normal person who does acting and art. When the camera stops rolling, I'm not any different from anybody else in the room."

Who better to rule in her role as Queen of All Media?

Can you imagine Hollywood starlets such as the aforementioned Paltrow, Diaz and Flockhart being so humble? Naaah! That's why Strain's the dame who deserves her fame.