First, do no harm; second, defend yourself

She was tiny, she was old, but do I regret hitting her? Hah! 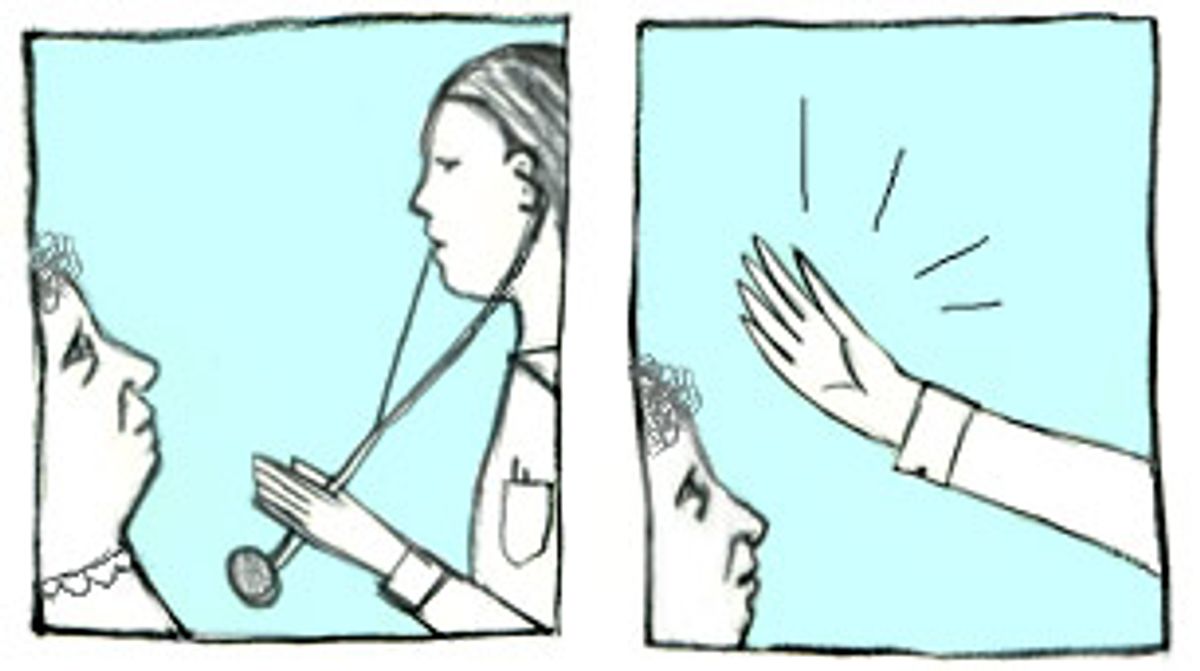 Before I begin a shift in the emergency room, as I put on my white coat and fold my stethoscope into my pocket, I say a silent, short prayer: "Please, don't let me hurt anyone; let me be of help; don't let me make any mistakes." Although an agnostic, I find this brief plea reassuring. Then I enter the E.R., intentions resolute, fears abated, professional armor intact. This ritual began 16 years ago as a desperate reaction to my responsibilities as a young emergency medicine intern. Experience has tempered the desperation, but superstition compels me to continue the custom. And until Vera came along, I thought it worked.

Vera is not her real name, but anyone who has ever worked at our E.R. will instantly know who I'm talking about. For years she has been a regular. Always arriving via ambulance, swathed like a babe in blankets, the 67-year-old seems frail (at one time she weighed just 97 pounds). She wears a stained flannel nightgown, a purple chenille robe, pink house slippers with exhausted stockings collapsed at her ankles. Her white, wispy hair looks like the spun glass strung on Christmas trees; waxy gray skin shrouds her tiny torso. In short, Vera appears to be just the sort of needy, fragile creature that people like me went into medicine to help.

But as soon as Vera opens her mouth, this picture of vulnerability shatters. "Get me into a room now," Vera barks. "NO, I won't go into a wheelchair. Where's the doctor? Don't take my purse."

"What seems to be the problem?" asks the triage nurse.

By all counts, Vera is a troubled soul. Though she waxes venomous whenever she gets a chance, it's obvious she's a lonely, powerless person. Why else would she spend all of her time trying to get a bunch of strangers to take care of her? But such psychological explanations don't really help those of us who have to work under the shower of her bile.

Over the years, a mythology has grown up around her; only evil gossip can soothe our frayed nerves after a night in her charming presence. Some say that Vera slept with her parents until she was 18, and that after she married, she pretended to be "sickly," demanding that her husband return home immediately to tend to her. He apparently lost his job at the local battery plant as a result of missed work. Some say that he divorced her years ago, but Vera hisses that he died a slow, horrible death.

Although she spends all her time trying to get our attention, she pretends to abhor companionship. Vera will do anything for a private room in the hospital. She once told another patient, installed in the bed next to hers, that she had overheard us talking about his medical condition and that he was going to die -- a painful, protracted, agonizing death, not unlike her late husband's. This patient had merely been constipated, but it took us hours to convince him that some milk of magnesia and a switch to more water and fiber in his diet were really all he needed.

Over the years Vera has complained of many ailments and pains. At first, when test results came back negative and it appeared that nothing was wrong with her, I assumed that her symptoms were psychosomatic. Now I'm more inclined to assume they're consciously fabricated. Her favorite? Paralysis. Her error is that she can't tolerate having the door closed on her room. One day I developed the Vera Walk Test: Shut the door to her room and wait 10 seconds. Slowly the door opened, and Vera could be seen nimbly climbing back onto her stretcher, her paralysis "healed."

"Vera, this is wonderful; you can walk."

Nonplused, her reply was almost Nixonian: "I am not and never have been able to walk."

Realizing that it wasn't medicine so much as a life that she needed, we tried to help her. She refused therapy, home visits, Meals on Wheels or suggestions to volunteer, adopt a pet or get a hobby. Since her main desire -- admission to the hospital for total and complete care -- is rarely satisfied, bitterness has become her favorite bone. She has fired every doctor who ever cared for her, and sent a complaint to the state attorney general renouncing us as heartless, greedy doctors who abandon the sickly and the old. Our reply to her complaint consisted of two large boxes filled with medical records, X-ray reports, psychiatric evaluations, dietary notes, social service consultations and a 200-page book detailing her medical bills for the previous year, mostly unpaid because the state thought the care was unnecessary.

Yet as difficult as Vera was, we all managed to work around her. She was just another challenge in a job full of impossible challenges.

It was a summer Saturday night, an all-hands-on-deck kind of shift. The rooms were filled, spilling patients and families into the hallways. Another ambulance was unloading in the bay, the fourth in 20 minutes. Vera was in Room 5, fuming over the wait. Her chart, listing the usual complaints, was stacked behind 12 others. I was well into the ninth hour of my shift, working at a pace that I would describe as focused mania. I was tired and anxious about the possibility of missing something vital in the crush.

On my knees in the hallway outside her room, I was splinting an obscenely swollen ankle belonging to a man addled with Percocet. Vera, believing herself unobserved, crawled off her stretcher, walked to the center of the room and slowly arranged herself into a pile on the floor.

"Vera, get back on that stretcher. Now!" I shouted.

Shamelessly, Vera replied that she had been thrown from the stretcher. "And I'm going to sue."

Hurriedly smoothing out the top of Mr. Percocet's splint, assured that it and he were securely in place, I spun around and tore into Vera's room, grabbed her by the knotted belt of her chenille bathrobe and yanked her to a standing position. Stunned, Vera stood unaided and unbelieving.

"That's it. You're outta here!" My professional empathy -- already stretched -- had snapped.

I was down, much to my surprise and that of the aide who had come to help. Vera, aspiring paraplegic, had sucker-kicked me in my solar plexus. She then pounced on me and began pinching and twisting my ears. My thoughts flashed back -- I imagined I was being attacked by the Three Stooges' grandmother.

Then she spit in my face.

For the first time in my life, I hit a patient: I smacked her open-handed right on her malevolent mandibular angle, toppling her onto her galled gluteus maximus. With that swing, my pristine armor shattered.

Rattled, my dignity and self-assurance badly bruised, I completed the required physical examination, careful to document her remarkable strength and agility. Unhurt and unrepentant, refusing to depart under her own power, Vera was carried firefighter style out to the waiting room. Patients and their families shifted nervously as they watched two strapping adults deposit this seemingly ailing elderly woman -- bellowing, "They're trying to kill me" -- in their midst. "Boy, how sick do you gotta be to get help in this E.R.?" I heard someone whisper from the crowd.

The police were called when she wouldn't leave the waiting room. A shiny new 24-year-old officer, displaying more swagger than experience, asked me what I wanted to do with her.

"She is evil and should be destroyed, but filing charges will do." I reached for another patient's chart. Officer Swagger was last seen trying to roll Vera, wedged tightly in a hospital wheelchair, into a small family consultation room. Vera, a leg braced against each side of the door frame, was doing a fairly decent job of defeating his intentions.

Having worked several thousand shifts in emergency rooms, both urban and rural, I've interacted with the drunk, the dying, the insane and the average Joe who is having the worst day of his life. Sometimes their fear and pain make them strike out violently. I have ducked punches, avoided kicks. I have been bitten and spit at and called every name in the book. This is just part of the job, which I rarely take personally. But with Vera, my professional veneer cracked and I did take it personally. In slapping her, I broke my Hippocratic oath, thereby eviscerating my hubris. Not only had I lost control, I didn't even feel sorry about it. I regretted my actions, sure, but sorry? Never.

Now the prodigal patient, Vera still comes to our E.R. Having voluntarily elected to reside in a full-care nursing home, she has finally found her haven. She has moved up in weight class, tipping the scales at 140 pounds, but her attitude and attire have changed little. As for me, I still say my prayer, but I make no assumptions that the gods can protect me from myself.