With "Millionaire," one of the most successful TV shows ever, ABC threatens to crush its bewildered competition during the crucial May sweeps for advertising dollars. 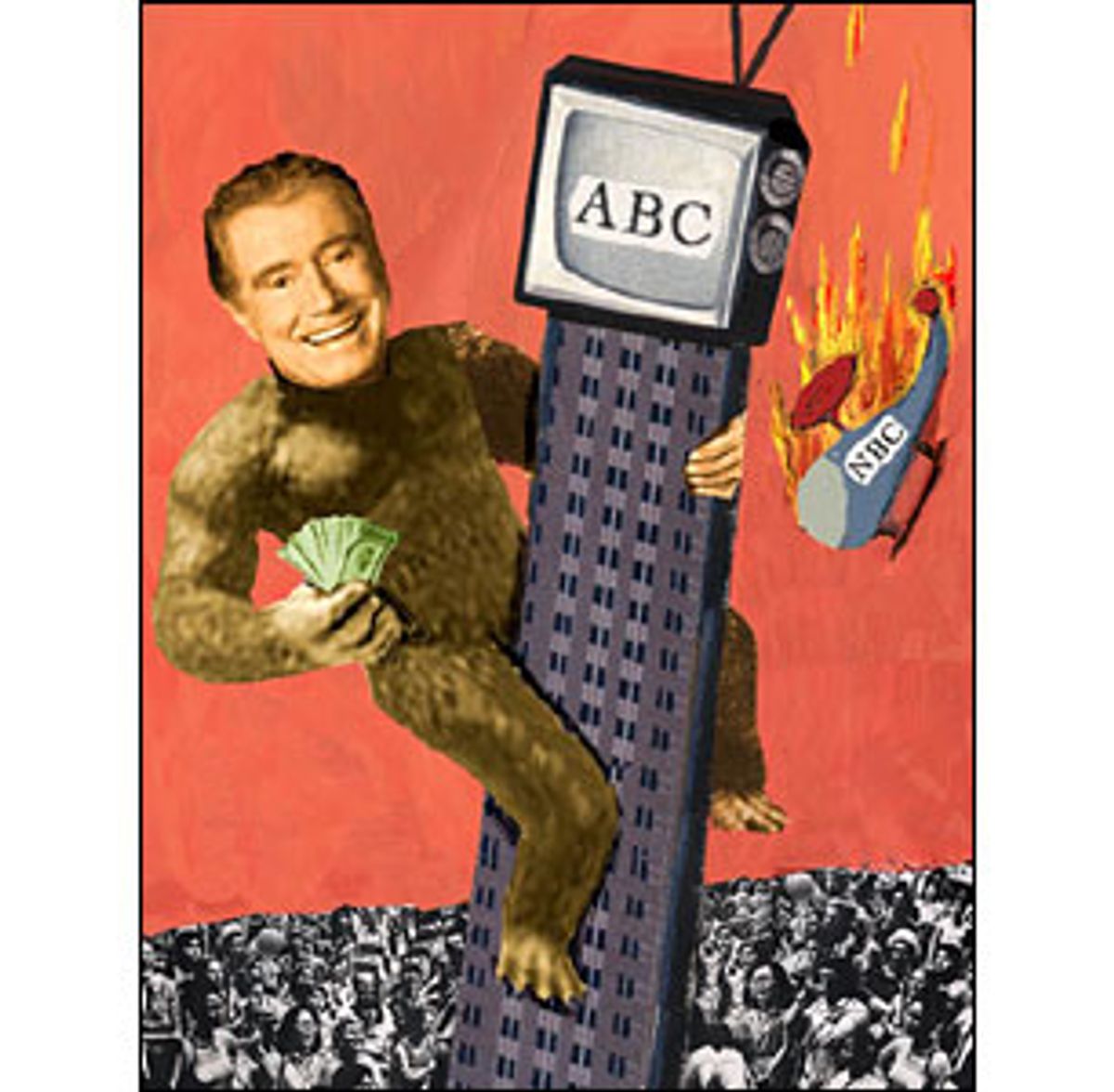 As television network executives prepare to unveil their fall lineups to advertisers this week, ABC's 800-pound programming gorilla, "Who Wants to Be a Millionaire," is impacting the business as perhaps no show in history has.

By consistently drawing numbers that a year ago were unthinkable (nearly 30 million viewers per episode), the Regis Philbin-hosted show, serving up greedy thrice-weekly broadcasts (Sunday, Tuesday and Thursday), has become a marauding behemoth on the TV landscape, with competing shows and network execs scrambling to get out of its way.

"How do you compete?" wonders Alan Wurtzel, president of research and media development for NBC. "It really is a unique TV force of nature."

"I wouldn't want to be programming against it," agrees Mike Greco, manager of broadcast research for ad agency BBDO. He notes that there have always been weekly blockbuster programs, from "Bonanza" to "The Cosby Show," that sucked the life out of the competition on a given night, but never a show that has caused ratings damage nearly every other night of the week.

"It's like catching lightning in a bottle," boasts Andrea Wong, vice president of alternative series for ABC, the division that gave birth to "Millionaire."

So powerful has "Millionaire" become that it has almost single-handedly stopped several industry trends dead in their tracks. Among them: the erosion of broadcast TV at the hands of hard-charging cable, the decline of family viewing and NBC's decade-plus dominance of Thursday-night prime time. The show has also boosted TV viewership across the board to all-time high levels this season.

All of this from a game show that recently featured a contestant pondering, on-air, a single question for nearly 15 minutes. That's not the sort of stuff they teach in programming school.

"The greatest breakthroughs are shows that were never supposed to happen," says Tim Brooks, senior vice president of research for the cable channel Lifetime and coauthor of "The Complete Directory to Prime Time Network and Cable TV Shows." "Nobody would have guessed that this is how ABC's fortunes would turn."

"What a difference a Regis makes." That's how researchers Steve Sternberg and Stacey Lynn Koerner summed up ABC's "Millionaire"-powered turnaround in a recent report for TN Media, a major media buying firm. The network, which hadn't been on top since the halcyon days of "Home Improvement," "Roseanne" and "Ellen," has ridden "Millionaire" to 19 straight weekly ratings wins as the most-watched TV network, according to Nielsen Media Research.

And the network broke its old ratings record in style. Forget the recent flap between Time Warner and ABC parent Disney, which saw ABC's signal go dark for nearly two days in at least part of seven major markets. Four celebrity "Millionaire" episodes, with stars like Dana Carvey, Ray Romano and Kathie Lee Gifford winning money for charity, aired Monday through Thursday at the height of the corporate tug of war and still posted monstrous numbers. The first attracted more viewers to ABC than CBS, NBC, Fox, UPN and WB got during the same hour combined. The night Rosie O'Donnell took the hot seat, 36 million viewers tuned in -- a new "Millionaire" best.

One more ABC fun fact: Two weeks ago the network averaged 18 million viewers, the third-highest weekly total in the network's history. (The only higher weeks were Super Bowl and Oscar weeks.)

With firepower like that it seemed ABC last week was toying with the competition. On the final celeb night of "Millionaire," with comedian Romano in the chair, the show deliberately went eight minutes past the 10 p.m. hour. The result? "Millionaire" beat the first half-hour of the competing "ER," the first time any show had done that to NBC's franchise.

Not coincidentally, the special celebrity episodes kicked off the all-important quarterly sweeps period, when local TV advertising rates are determined. ABC plans to air 17 "Millionaires" during the 28-day sweeps period. Most devastatingly, it aired a special edition of the show against "60 Minutes" and will do the same against "ER's" upcoming season finale.

Thanks to "Millionaire," ABC has won the last two sweeps periods, in November and February. If, as expected, the network pulls off a May win, it will be the first time in 22 years ABC has captured three consecutive sweeps periods. An added bonus for ABC this time around: By boosting the show's ad rates up to $500,000 per 30-second spot, the four celebrity-themed episodes are expected to generate more than $40 million in revenue.

Just how big has "Millionaire" become? If you accept ABC's research that says most of the show's viewers are exclusive each night (meaning they don't tune in on either of the other "Millionaire" nights), roughly 50 million different people watch one of the episodes each week counting all three telecasts. By comparison, last year's No. 1 program, "ER," drew, on average, roughly 25 million viewers each week.

Few shows have ever thrown around that kind of weight, which means competitors are nervous these days as the networks fine-tune their fall lineup in time for this week's upfront buying spree -- the annual billion-dollar ritual when advertisers lock up TV commercial time for the upcoming season.

Among producers, everyone's hoping to avoid becoming next fall's "Chicago Hope" while dreaming of cashing in as the season's "The Practice." Both programs' fortunes were changed dramatically by "Millionaire."

If the creators of ABC's "The Practice" don't send daily thank yous to "Millionaire" executive producer Michael Davies, they should. "The Practice," which follows the "final answer" phenom on Sunday nights at 10 p.m., has seen its ratings soar this season, up nearly 50 percent during February's sweeps, compared with same time last year, when it followed the news magazine "20/20." Suddenly the courtroom drama starring Dylan McDermott has become a bona fide blockbuster, ranked No. 8 for the season and drawing nearly 20 million viewers weekly.

Here's the clearest example of what programmers call the halo effect -- when a hit makes hits out of shows it leads into: On March 19, "The Practice" aired a rerun that had already been seen twice during the '98 season, drawing 11 million and 7 million viewers, respectively. But when it aired behind "Millionaire," the same "Practice" episode drew 17 million viewers and landed in the week's top 10. Did it help that "Millionaire" host Philbin that night mistakenly told viewers, "Stay tuned now on ABC for a brand-new episode of 'The Practice'"? Couldn't have hurt.

"People say, in the day of the remote control and short attention span, there's no such thing as lead-in. Well, 'Millionaire' just shows how important flow is," says Ron Fredricks, executive director of national broadcast at J. Walter Thompson.

Or take ABC's Tuesday-night comedy "Dharma & Greg." Last season it racked up solid but not spectacular numbers. Now, riding the wave of "Millionaire" every week, the show has jumped to No. 17 for the season. It's perfect timing for the show's creators, too. Having just concluded its third season, "Dharma & Greg" now has enough episodes in the can to hit the highly lucrative syndication circuit, where local stations pay big bucks to air popular reruns every night at 5:30 or 7 p.m. Just three weeks into the syndication market, "Dharma & Greg," thanks to this season's blockbuster numbers, was purchased by TV outlets in eight of the top 10 markets.

Of course, there's a flip side to all the "Millionaire" joy that ABC is feeling. Take CBS. The network had been nursing its hospital drama "Chicago Hope" for years, even managing to boost the show up near the top 20. But since January, when it started facing off against "Millionaire" on Thursday nights, the show's ratings have collapsed. Even after paging James Garner for some guest spots, the show lingers at 67th for the year. The blow could prove fatal; the program may not be renewed for next season.

The staff at "Chicago Hope" is not alone. Judd Apatow is the executive producer of "Freaks and Geeks," NBC's critically acclaimed yet ratings-challenged high school drama. Apatow recalls what he was thinking when his show was given one last shot at survival last January: "When I heard that our big relaunch was facing Regis, I knew it was over. It's smart scheduling for ABC but it does nip a show like ours in the bud. The sad part is that a show like 'Millionaire' makes every network think there is a quick, cheap fix to their schedules. It makes them panic. They become less interested in supporting harder-to-sell quality shows when they think there is a golden calf out there that can solve all their problems."

As it has for well over a decade, NBC still owns Thursday night. But whereas last year it easily cruised to victories by 12 ratings points, this season its lead has shrunk to half that, according to TN Media's analysis. "Frasier," an anchor for NBC's showcase "Must See TV" lineup, is now regularly beaten by "Millionaire," even among viewers in the crucial 18-to-49 demographic.

NBC's not walking away from the Thursday-night fight, though. The network is reportedly moving its brightest comedy, "Will & Grace," into the 9 p.m. must-see slot next season and returning "Frasier" to its previous Tuesday-night home.

"Obviously we've taken a hit," says Wurtzel at NBC. "They now have a toehold on Thursday that they haven't had in 10 or 12 years." Actually, you'd have to go back to the "Barney Miller"/"Soap" days of the '79-'80 season to find an ABC offering that performed as well as "Millionaire" has on Thursday night.

Yet if you talk to agency media buyers, they'll tell you everyone in network TV should be happy with the success of "Millionaire," not just the suits at ABC. "It's a good story for network TV overall," says Greco at BBDO. "The networks have been hit over the head for years by cable and the apocalyptic theory that the networks would end up niche players like cable. 'Millionaire' proves that programs well done, and marketed and promoted well, can attract large audiences with a wide demographic. That's the whole idea of broadcast television. It doesn't just have to work with the Super Bowl or award shows."

The fact is, after years of runaway growth, cable's ratings finally slowed during this year's first quarter, the same quarter that "Millionaire" debuted as a weekly series. (Last fall and summer the show aired nightly for two weeks at a time.)

That seems to be small comfort to competitors. There are some industry Cassandras: They point out that the "Millionaire" audience skews older, which at some point may turn advertisers off, and that the show will inevitably come back to earth. And if its descent is as rapid as its rise, ABC could be in for some trouble scrambling to fill three hours of prime time. (ABC execs told TN Media that "Millionaire" will be around for at least five years; others aren't so sure.)

"It's a double-edged sword," says one network executive. "To sleep really well at night you want to have consistently performing, regularly scheduled programs. That's what keeps you on top. With 'Millionaire,' what nobody knows is how long it's going to last."

But as prime-time historian Brooks points out, the television business has always been about the here and now, not about fretting over next season. He recalls the advice a programming colleague gave him years ago: "When the limo is there, take it." No doubt ABC will take the limo as often as possible.