The FDA has just approved Eros, a tiny suction device that increases blood flow to a woman's clitoris. 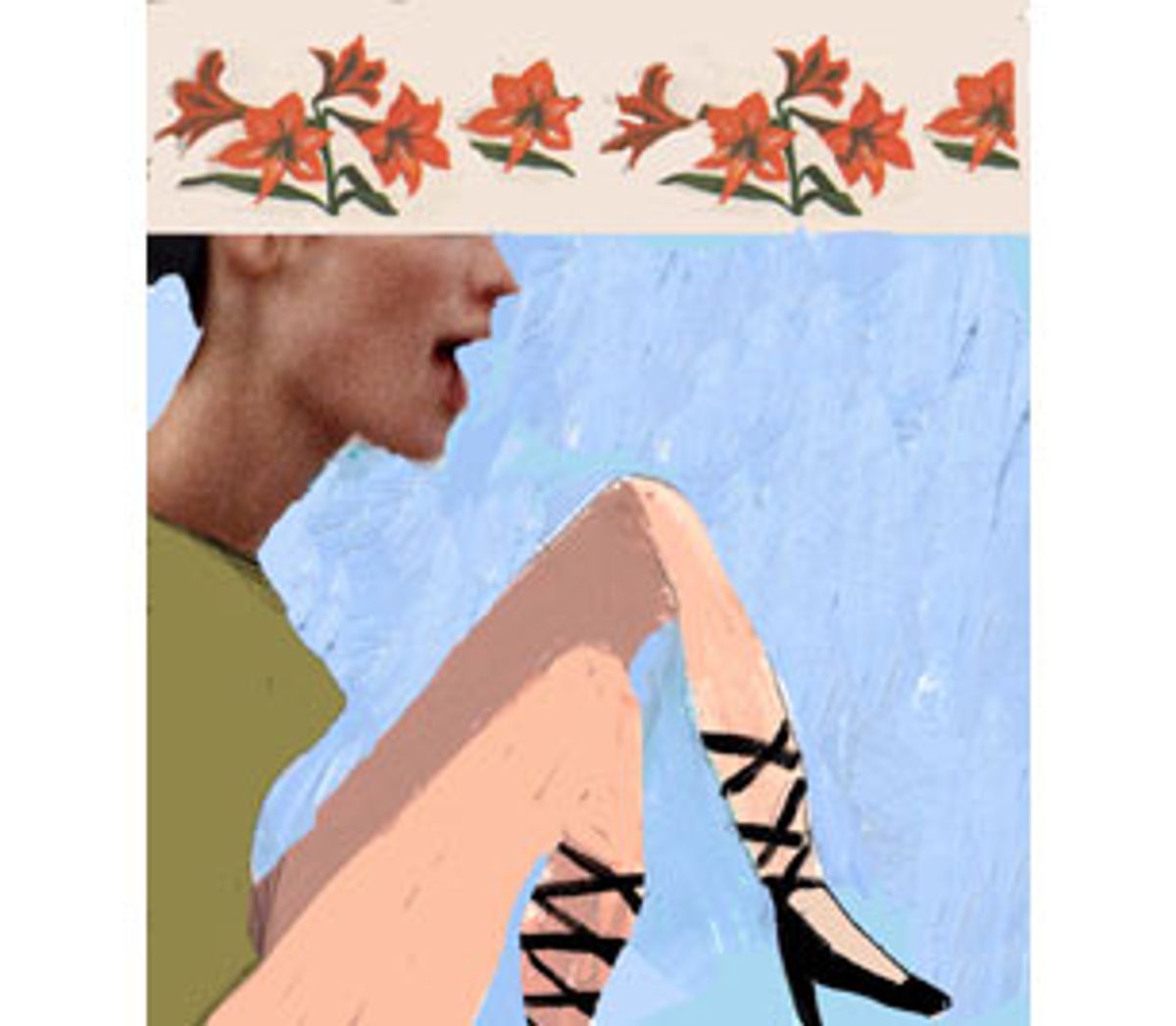 Women's sexual function is generally stuck under the prim umbrella of "reproductive health." But the success of Viagra has pushed the medical world to study female pleasure, a belated acknowledgement that most nookie is decidedly nonprocreative. Earlier this month the federal government got on board when the FDA approved, for the first time, a device to help women get aroused and come.

The new gizmo, called Eros, is produced by the 3-year-old device manufacturer UroMetrics. It's distinctly premillennial in design: A soft funnel connected to a battery-controlled vacuum draws blood down into the clitoris. It strikes me as the kind of thing you could buy with comic-book coupons, if you were willing to forgo X-ray specs or a decoder ring. But this sucker is going for $359 a pop, available by prescription only in the United States.

The ailment gynecologists, urologists and other doctors will be treating with Eros is female sexual dysfunction (FSD), whose symptoms were determined during several meetings of an international consensus panel. (Confusingly, the American Psychiatric Association's diagnostic manual lists female sexual arousal disorder, or FSAD, whose symptoms overlap with FSD.) FSD covers four areas: lack of desire, inability to get aroused, inability to have an orgasm and pain during sex.

Eros addresses only arousal and orgasm, says inventor Claire Hovland, CEO, founder and chairman of UroMetrics. "Desire is more hormonal," he says, while Eros is just for stimulating the flow of blood. An engineer and physicist, Hovland started down the path toward Eros in 1984, when he and a surgeon friend developed an instrument for measuring the quantities of blood the heart pumps.

Eros treats the clitoris like the little penis it so closely resembles. Both organs are full of tiny cabernosal arteries lined with smooth muscle. During sexual arousal, that smooth muscle relaxes, allowing the arteries to fill up with blood. Eros mimics the action of male vacuum-erection devices (VEDs), suction tubes that draw blood into the penis and relax the smooth muscles. I've always thought of VEDs as rip-offs, but Hovland says they're more effective than Viagra, helping "millions of male users" get it up.

Eros was tested on 25 women from 23 to 67 years old. About half were post-menopausal; 15 suffered FSD and 10 did not. Subjects used it at home and kept a diary of the effects; Hovland says they were encouraged to use it with their partners, but some of the women preferred to vacuum solo.

Hovland says Eros took longer to work on post-menopausal women, because their clitorises are more likely to be "atrophic." Blood is needed, he explains, not just for engorging, but also for cleaning. Collagen can build up in the tiny arteries, and if the arterial blood doesn't come in and wash it out, "it can form scar tissue in both penis and clitoris." This kind of sexual dysfunction shares artery-contracting risk factors -- smoking, high cholesterol -- with heart disease, which may help doctors persuade pudgy smokers to shape up.

Many post-menopausal women have little or no blood flow to their clitoris. This, Hovland says, causes the vaginal dryness that drives many older women to hormone-replacement therapy. "Only in the last three years has clinical research been done on arousal," Hovland says. "We're just figuring out that vaginal lubrication is actually a reflex response to clitoral engorgement. In some of our subjects it [vaginal lubrication] happened in less than a minute."

Blood flow is the principle behind Viagra, too, which is being tested on women, both formally and informally. Apomorphine, phentolamine and prostaglandin are three other drugs being tested that aid blood flow down below and smooth muscle relaxation.

Reporters and publicists are all tossing around the statistic that 43 percent of American women suffer from sexual dysfunction. That figure came from a study published last year in the Journal of the American Medical Association (JAMA), which also found that 31 percent of men had some sexual dysfunction. The JAMA study, based on 1992's National Health and Social Life Survey, looked at nonphysiological factors and found that unsatisfying sex was linked, in a chicken-or-egg conundrum, with "low feelings of physical and emotional satisfaction and low feelings of happiness." The FDA gynecologist who approved Eros emphasized that sexual problems can be emotional and that Eros won't help everyone.

I'd like to believe science cares about improving women's sex lives, but I can't help noticing that it's an act of marketing genius to medicalize sexual discontent. Cosmo and its evil sisters have always told us we're too fat and ugly. Lately they've been telling us we're not sexual enough either, and if there's money to be made, they'll keep telling us. FSD and FSAD join ADD and ADHD in the netherworld where treatment of actual physiological dysfunction meets the exploitable hope that anything can be fixed. Maybe your kid has ADHD, but maybe he's just a brat. And maybe some women just aren't that into sex -- or their husbands.

Every woman I know likes her clitoris approached slowly and indirectly -- it's too sensitive to just pounce upon. The idea of sticking a little vacuum cleaner there with no warm-up sounds decidedly unerotic, and I can think of more pleasant things to do even to a clit that's been warmed up.

I ask Hovland if oral sex couldn't accomplish everything Eros does. "Certainly," he replies, "but we didn't look at that in the study."

I hang up and settle in with my device and a clock that's also a mirror. The directions say not to keep Eros latched on for more than 4.4 minutes, and I wanted to do a visual engorgement check as well. The funnel is an oval 1.25 inches long and three-quarters of an inch across. The booklet shows it plugged right into the vacuum pod, which doesn't allow you to lie back, so I used the connector tube.

The vacuuming was imperceptible at first, then vaguely unpleasant. I went four minutes, rolling the intensity dial all the way up and then back down. Afterward, I didn't feel turned on or wetter, and the canoe driver wasn't any bigger, harder or redder. I tried it again without the tube, just in case. I don't have FSD or FSAD, but for me, this subtle intake was far inferior to a vibrator or the standard spit and polish with my fingers. Just to be perfectly scientific, I did the latter to see if my orgasm would be any more intense, but it was just regular -- great. I repeated the experiment with the same results.

But 18 of 25 women in the Eros study felt something -- lubrication, more sensation, orgasm or "satisfaction." Of the relatively small sample size, Hovland says "it's enough for statistical significance."

Sharon Snider of the FDA says the agency accepted the low number of test subjects because "it's a very simple product. Such a low-risk device doesn't need many women to prove safety or effectiveness."

Hovland's voice warms up when he tells me his favorite stories from the study. One 35-year-old divorcee had been through many unhappy relationships when she joined the study. "She was so happy with the device," Hovland says, "that she and the guy are getting married."

Another subject was a 53-year-old woman married to a man the same age. The husband got a penile implant just as she went through menopause and dried up. "Oh my God," I exclaimed, "It's just like that short story where the girl sells her hair and the guy buys her a hairbrush, you know that one?"

The indulgent engineer answers, "I think so. Anyway, she enrolled in the study, and now she says, 'We're so happy now, we're laughing and enjoying each other so much.'"

I'd recommend exhausting the oral sex and sex toy possibilities before springing for Eros, but I assume these newly satisfied ladies had explored other options, so I give them the last word. Another study of Eros is in progress, this one with 40 women, so soon we'll know better if something that sucks can also rock.