All media, all the time

Inside.com wants your undivided attention, and $19.95 a month. Plus: Jesus goes local. 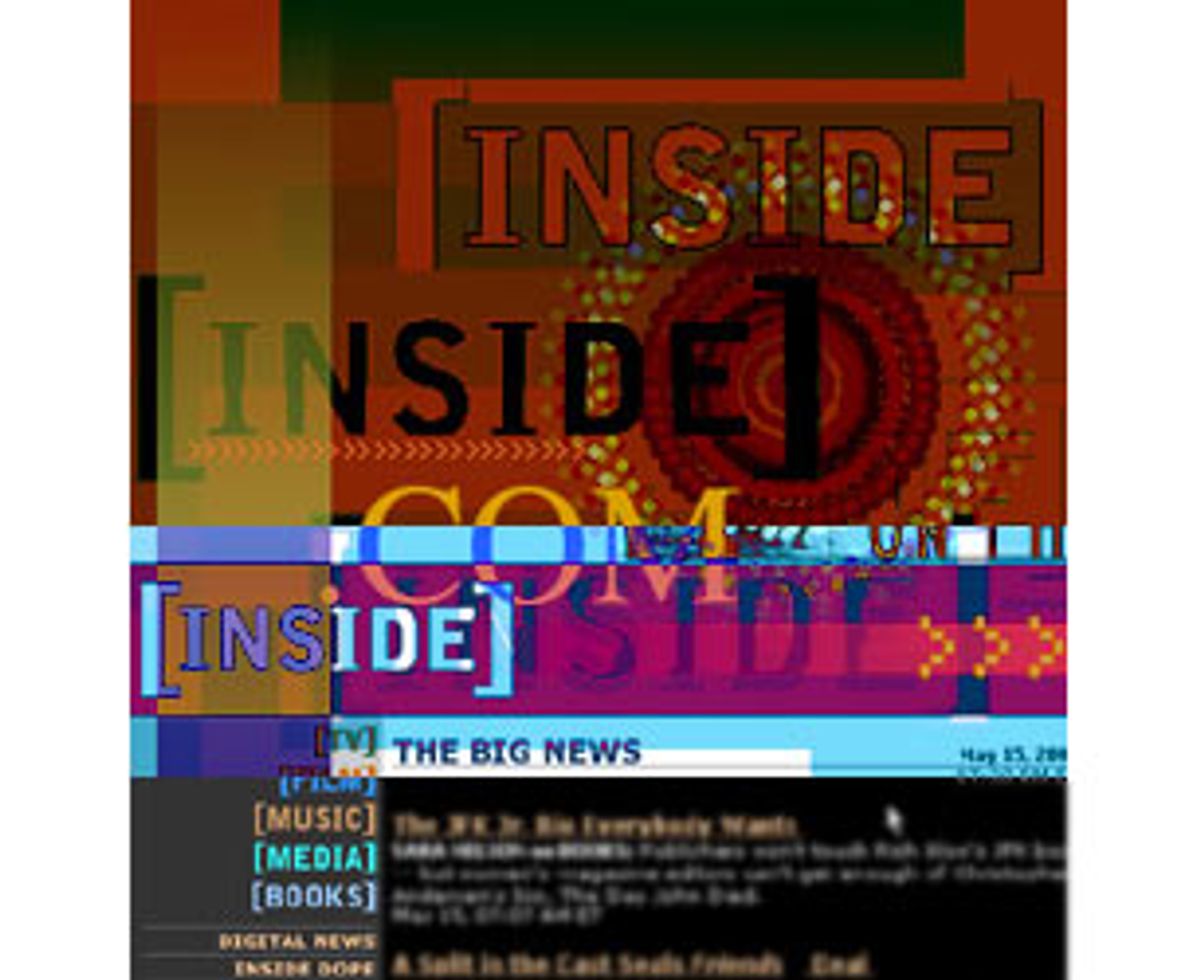 After the stealth launch of Inside.com last week, the e-mail started flying.

Despite a "Sneak Preview" disclaimer on its home page, a lot of people viewed this version (which they might have called a "beta launch" a few years back) as the final cut. Responses were mixed.

Jim Romenesko, auteur of the popular Media News site, asked readers for their reactions. So far, they have run the gamut from gotta have it to fugedaboutit. Romenesko's site, which has been cited as a source of inspiration (at the very least) for the Inside.com idea, stands to lose as much traffic as anyone (Salon included) to the megasite. But ignoring the arrival of the much-hyped brainchild of Powerful Media founders Kurt Andersen and Michael Hirschorn is like trying to ignore a dolphin in your bathtub. (That dorsal fin might give you the wrong idea.)

For those of us in the media who write about the media, tackling something like Inside.com is a lose-lose proposition. Fulsome praise might be interpreted, at worst, as job hunting (Kurt, you still have my risumi?) and at best as the sort of hall-of-mirrors reporting that people outside the media abhor. Criticism, of course, would sound like sour grapes, an SOS from a fishing boat about to be swept up in a tsunami.

That said, I have to admit that my first reaction to the site (which will cost $19.95 a month but is available now on a free 30-day trial basis) was weariness. It made me tired. Not bored, or filled with ennui (that describes the rest of my life), just intimidated by the seeming depth of Inside's coverage.

It reminded me of when I first began working on the Web five years ago. I called a movie publicist I knew to tell her about my new venture. She was more annoyed than intrigued.

That's roughly how I felt upon first viewing Inside, like someone had just dropped a phone book on top of my pile of morning reading material and said, "Be sure to finish that by noon." I called some of my fellow media watchers to see if they felt similarly intimidated.

"I think the technology is terrific, but it still has a few start-up glitches -- such as Inside Dope not showing up for me when I clicked on [it] earlier today [Monday]," said Keith Kelly of the New York Post. "My job of finding and publishing scoops in the Post has so far not become any harder (or for that matter any easier) now that Powerful Media has added its own reporters to the beats I cover. That said, they have talented people plying the waters and I'd expect them to bring in some big catches at some point."

Other people seemed overwhelmed -- or maybe just annoyed -- by the basic ambition of the thing. "Inside's like reading an application for a kid trying to get into Harvard," said New York magazine's Carl Swanson. "It's intelligently, even hyperkinetically compiled to appeal to the insider, but in the end so densely well rounded to the point of being undifferentiated. It's hard to tell in all that blue text what's new, what's Web-speed 'news' and what's going to be just fun to read, and why I can't figure out whether those charts and data snippets that take up a huge part of the page are actually important. Being definitive is an awful lot of pressure to put on yourself."

All that copy -- diced up into comestible lists, numbers and gossip -- shouldn't surprise anyone familiar with Andersen's C.V. Spy magazine, which he co-edited with Graydon Carter, was chock-full o' graphs and dingbats, a rolling parody of infofluff culture in the '80s, and New York magazine took on its own mildly subversive slant -- much to its owners' chagrin -- under his editorship. The problem with such an online embarrassment of riches is how to sort it all out.

Inside offers subscribers the chance to "customize" the site according to their interests. I ignored this feature at first and logged on Monday to find the late-breaking salvation of "Friends" at the top of The Big News, a feature on the front page. Fascinated as I was to learn that Lisa Kudrow and David Schwimmer were determined to hold out for $1 million an episode (I guess the success of "The Pallbearer" really went to Schwimmer's head), I thought there must be more to life than this. So I made a hierarchy of my interests with media on top and TV on the bottom, reloaded the page -- and nothing changed.

Of course, it could be that I'm doing it wrong ...

One of the nicest things about Inside is that it puts its writers first. In early partnership talks with other media companies, the creators touted the talent they were bringing on board, and bylines and voices are prominent throughout. David Carr, late of Washington City Paper, writes about media. He debuted with a thoughtful, well-reported piece about the much-anticipated changing of the guard at the Washington Monthly.

"This guy is a master of reporting, analysis and prose style," says Village Voice Press Clips author Cynthia Cotts. "The rest of us media reporters might possibly be qualified to clean his monitor and keyboard."

The Inside masthead is listed alphabetically, like the credits for some Robert Altman movie. Star writer Kim Masters gets second billing to a relative unknown like Denise Levin. Recently fired Mercury Records wunderkind Danny Goldberg, now hawking his new independent label, is also a contributor.

But this nonhierarchical approach does not permeate the site. The Power Index (a list of media moguls and their relative place in the pecking order) is all too familiar, and its billing seems like a parody of itself. As Andersen prophesied in his novel "Turn of the Century," it's EW for Kids.

"Check in throughout the day to see how the moguls are doing as they buy and sell companies, announce new deals and initiatives, demote and are demoted," reads the intro. Suck did this for Net Moguls and managed to make it funny.

But it's early yet. The tech problems will doubtless be sorted out, and, given the pedigree of the talent involved, so will the funny business. A few magazine editors have already told me that they could have gotten a pedicure while waiting for Inside's pages to reload. Others have found valuable information on the site -- information they would have paid a researcher to find for them -- and will happily subscribe.

Of course, they'll be writing off their subscription (as will I). The skeptics among Inside's readers insist there aren't enough of us with expense accounts to justify the site's business model. Who cares? The fact that so much of the criticism of Inside.com (criticism that began long before its launch) focuses on whether it can last is bizarre to me. Call it the anticipation of schadenfreude. The failure of such an ambitious site won't benefit any of us, nor will its success spell our demise (I hope).

One complaint I've heard is that all this information is available elsewhere. "I've already got places bookmarked to read all this stuff," gURL producer Tanya Edwards posted on Media News. And though Inside's Latest Deals and Job Changes puts me in mind of Done Deal, among other insider sites, it's nice to think I might find a lot of this stuff in one place.

The supermarket needn't kill the boulangerie, you know, especially if the latter offers cheaper fresh-baked goods. Me, I like shopping at both -- just as long as I don't go hungry.

And the Naz said, "Straighten cat with the bent frame." After it was reported last week that CBS would not run ads for Christian Web site iBelieve.com during its miniseries "Jesus," more than 95 CBS affiliates contacted the site to offer to run the ad locally. Now iBelieve spots will be featured in 16 major markets when the two-part biopic concludes Wednesday. (Part 1 pulled in an ungodly 8.2 Nielsen rating Sunday -- I read it on Inside.com! -- and millions more are expected to tune in to find out what happens to the Nazarene.) Call it the power of prayer.