How Barron's got its groove back

The new-economy business magazines haven't flexed as much muscle as an old-school weekly that still knows how to make the Street go round. 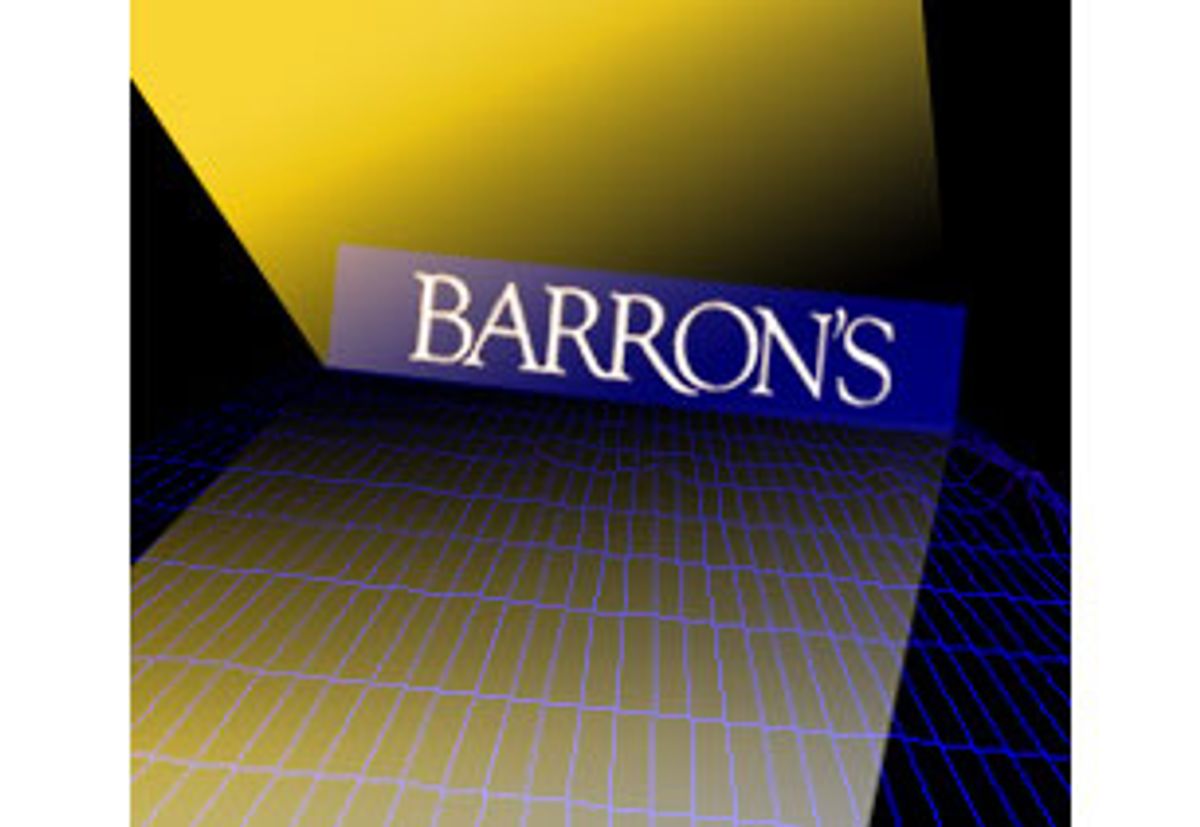 With dot-com butt-kicking now very much in vogue, Barron's -- the notoriously bearish mouthpiece of Wall Street's Burberry-suit establishment -- has hit a serious groove.

Once considered a closed men's club, Barron's has recently become must-read weekend material with a series of market-shaking reports.

Take the May 8 cover story, "Wanna Buy a Bridge?" That article booted market wunderkind Cisco Systems off its high-valuation pedestal. Analysts and the financial media blamed the Dow Jones weekly for sinking the company's stock -- it dropped a painful 7.4 percent the following day -- and dragging down the entire NASDAQ. What exactly did Barron's say? That Cisco wasn't worth its $68-a-share price tag.

The Cisco attack was just another blow to the battered tech sector. As new-economy stocks continue to fall out of favor, Barron's has risen like a vulture over Internet and tech-flavored roadkill.

Barron's rebound comes after the 79-year-old publication was dismissed as too old-guard for its own good. As the NASDAQ soared, Barron's was written off as a surly-if-distinguished grandfather, quietly shaking his head while his whippersnapper grandchildren ran around buying Internet IPOs and tech stocks. No one wanted to hear windy sermons about valuations and profits; they wanted to make money -- fast. But now, with the market turnaround, Gramps' advice isn't sounding so bad after all.

"They bring an establishment view toward the market by covering the rise of the new-economy sector very skeptically," says Richard Cripps, chief market strategist at Legg Mason. "Their natural bent has been not to buy into the hype, and they've hit their stride attacking the new economy."

That's not to say Barron's is always right. It's published several cover stories that investors quickly rejected as bunk. Cripps, for instance, said a recent cover bad-mouthing AT&T was off the mark. But he acknowledges that Barron's lately seems to be hitting the market hot spot.

The Barron's buzz began in May 1999, with a cover story bashing Amazon.com as an overvalued, overhyped symbol of irrational e-commerce exuberance. As with the Cisco story, everyone from CNBC to TheStreet.com cited the Amazon.com piece, "Amazon.bomb," as the culprit in the stock's immediate free-fall. (It traded at $61 when the story was published and dropped to nearly $50 in subsequent days.)

Then came the infamous cover story, "Burning Fast," which named 200 Web sites that were running out of dough. (Salon.com made the list.) The March 20 article, which provided all-too-painful details about the cash flow of several popular sites, inserted one of the first big pins into the dot-com balloon. It's still blamed for busting up the e-anything party.

Barron's editor, publisher and president Edwin A. Finn Jr. insists the publication, which he has overseen for the past five years, isn't the big bad bear that everyone makes it out to be. Finn, for one, is a big believer in the Internet. And he says Barron's runs three to four positive stories for every negative one. "But you don't hear as much yelping about those," he says.

Last week, after the Cisco story ran, Barron's was swamped with calls, e-mail and letters. "The attitude of some readers was, 'How could you say that about my Cisco?'" Finn says. "It's as if we offended their religion."

Such emotional outcry bodes well for the grand ol' naysayer, which has translated its attention-getting covers into dollars.

From January through April of this year, Barron's ad pages jumped 33 percent from the same period last year, while its ad revenue grew nearly 45 percent. Last month, ad pages were up a robust 47 percent, while ad income saw a 62 percent boost.

Finn is optimistic that the popularity of Barron's will continue to grow as more people take control of their investment portfolios, thanks to the growth of online trading. He admits that when he arrived at Barron's seven years ago as managing editor, it had the atmosphere of a "closed men's club." Since then, its covers have gone color; shorter stories have become more common; graphics are more frequently used; and editors are more likely to approve stories about big, splashy companies (i.e. the "Amazon.bomb" and "Burning Fast" covers).

But don't accuse Barron's of adopting an Investing-for-Dummies spin. It still offers pages of dry financial data about equity and futures options and obscure foreign investments, and its columnists assume a level of financial acumen that would scare off the average investor. "People tend to graduate to Barron's," Finn allows. But lately, lots of ordinary folks seem to be plunking down $3.50 to get their fingers smudged with Barron's newsprint.

After all, not reading could cost them.