"All I Wanna Do" director Sarah Kernochan on preps then and now, clandestine contraception and how she lost "The Hairy Bird." 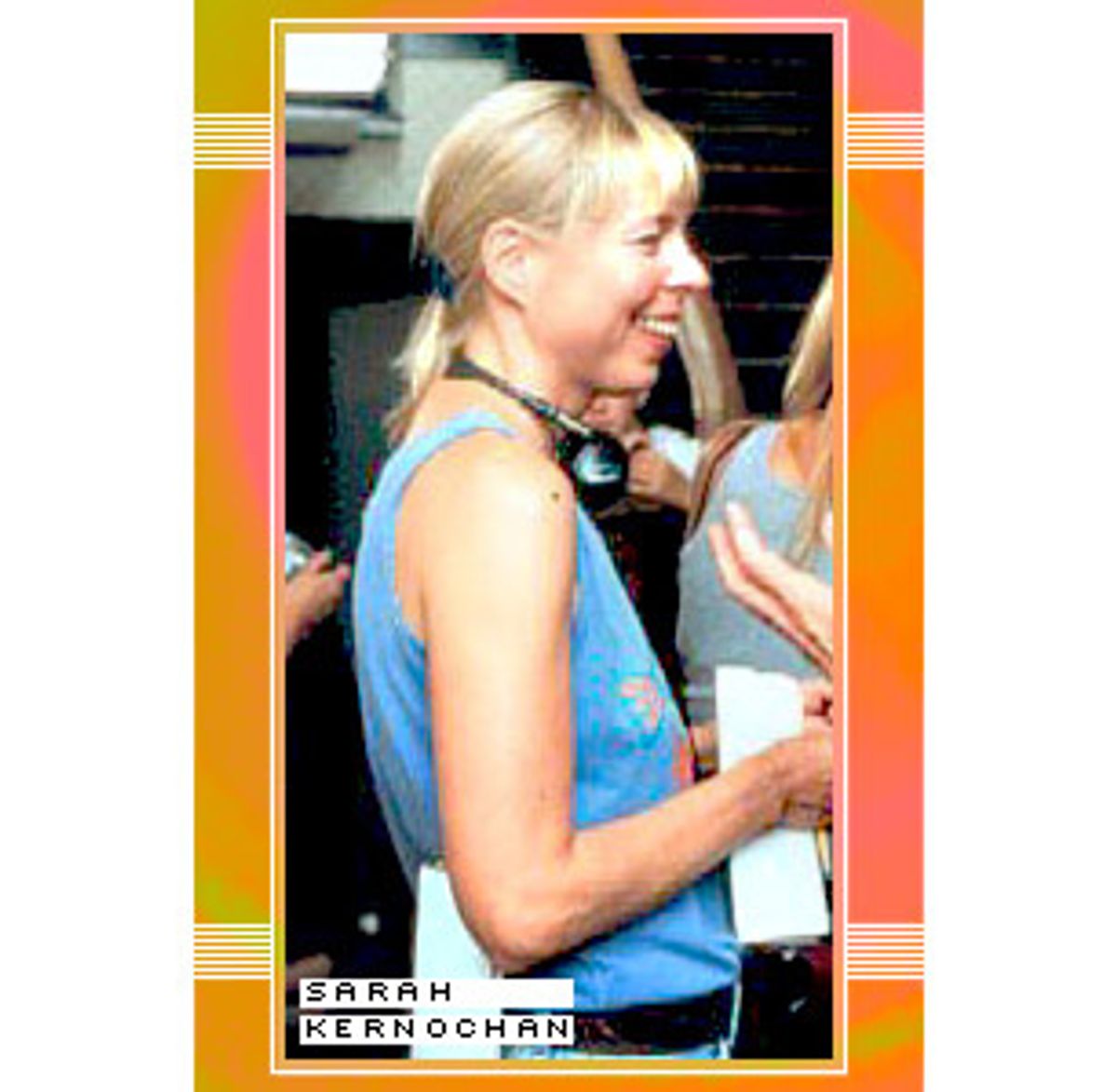 "I spent the beginning of my career doing one of everything I wanted to do," says Sarah Kernochan. The writer and director of the girldungsroman feature "All I Wanna Do" began her career in 1973 as director and co-producer of the Oscar-winning documentary "Marjoe." From there, she penned the musical "Sleeparound Town" and published a novel, "Dry Hustle," before settling into a career as a screenwriter. She co-wrote the screenplays for "9 1/2 Weeks" and "Sommersby," and went solo on the graceful period film "Impromptu," directed by husband, stage director James Lapine.

"All I Wanna Do" is Kernochan's debut feature. The film, which is in limited theater release, is about a group of teenagers at a girls boarding school in the early '60s that may be forced to merge with a boys school. Kernochan also went to a girls school in the '60s, and her characters -- played by Lynn Redgrave, Gaby Hoffman and Kirsten Dunst, among others -- face problems that she encountered back then and that she came across while trying to make the film. After 10 years of production, during which producers and financiers said the film would need more boys to succeed, Kerchochan finally got it made the way she wanted it. I recently caught up with her in a series of phone calls from her home in New York and from Los Angeles, where she's casting for her next film.

You credit "All I Wanna Do" as "a film by everyone who worked on it." I'd never seen a credit like that before.

That's becoming a huge issue, the possessory credit the director takes on films. Is it really "a film by" the director? I feel very strongly that for anyone to take that credit is rampant egoism. A film is a collaborative venture, not really "by" any one person. I just felt that everyone had contributed so much to the film, and it was so influenced by everyone's effort. Since so many people joined me on this cause, I decided to use my right to a possessory credit to put that in.

"All I Wanna Do" wasn't your first title. There was "Strike" and "The Hairy Bird."

"The Hairy Bird" was the original title. It's still my favorite, but the distributor at the time felt that it was too vulgar. I like the fact that it's vulgar, but that's my sensibility. Also, to me, the picture is about the incursion of the penis in young girls' lives -- that's what it comes down to. So I thought the title was completely apt. And I had animation to support it -- there's a flying penis in the animation, in the credits. It's kind of small; some people don't notice.

I'm afraid I missed it. But I did catch the "Hairy Bird" song.

I sing lead on that. The story is that I reconvened the singing group I'd put together when I was in high school. Glenn Close was in it, actually, and four other girls. And I just contacted them all and got them into a studio, and we recorded this. It was the first time we'd sung together since we were 16.

Darlene Love [the lead vocalist on many Phil Spector hits] also contributed to the soundtrack. How did you hook up with her?

Our soundtrack producer had worked with her once, so we contacted her. She happened to be in town, and she just hopped over to the studio and did it. I was so honored, I just about died. Because those songs, to me, when I was growing up, were just everything.

I actually wrote the songs she does. It's expensive to buy period music, so I hired myself for free.

The film is anchored in a particular time and place of American girlhood. What do you perceive as some major differences between being a girl then and now?

Contraception is a biggie. How you dealt with it was very clandestine, and you were on your own -- you didn't go to parents, there were no counselors, so you could end up in these really confusing situations. The contraceptive-foam scene in the movie was based on ... some personal experience. [Laughs]

People actually have been upset about the movie's handling of bulimia, because we didn't deal with it too much as a story line. But in those days, we didn't have a name for it, and we didn't really know what to do about it. It was bewildering. I knew that girls who threw up were upset about being overweight, but nobody knew anything more about it. So, consequently, I didn't really deal with that too much in the movie, except to imply that the character would be OK.

And there's the teacher, Mr. Dewey [who comes on to his female students], who was based on a teacher from my school. That was another case, like bulimia, where we didn't have a word for it. We had no term for predators and no real way of dealing with them. Now girls have a name for it, and they know about it, which gives them at least an infinitesimal bit more power over the situation. They can say, "It's not me." Back then, a girl thought, "I did something to bring this on." And you didn't go to anybody to talk, and you didn't report anybody. A friend of mine did take it upon herself to report the teacher to the headmistress, who called in her parents, who said, "We are going to disinherit you if you keep getting into this kind of trouble."

What were some things you were thinking about while you worked on the screenplay?

Maybe it will seem didactic to some people, but I really wanted to get a certain message across about the value of girls schools and the fact that a lot of women have not supported the things that are there to empower them. And, frankly, I think that extends to my experiences with the film. The fact that I've had trouble for 10 years getting it onto one screen, and then the struggle beyond its opening to keep it open, proves my point.

You've said that, in general, you're on a "personal mission to change the landscape of women's roles." What do you view to be that landscape currently, and what changes do you want to make?

Well, an example would be "Sommersby," where I was called in to do something to Jodie Foster's character, which at the time was a fainting little magnolia who would have needed a lot of help. I turned her into the kind of woman who would have survived the Civil War, because the character as written never would have. My M.O. preceded me; I think people know that there's no point in calling me in if you want the other kind of women characters: a featureless "help me" character, or the saint, the whore -- you know, any of the archetypes. I don't think all women are powerful, intelligent, any of those things. I just require that female characters be very real, that they have all the dimensions that the male characters do.

Your documentary, "Marjoe," won an Oscar for best documentary in 1973. What's it about?

There was this holy-roller-type evangelist who was leading a double life. He lived six months out of the year as a hippie, and then when he ran out of money, he went back on the preaching circuit [laughs], preaching against dope addiction and Satan and so forth. His name was Marjoe Gortner. He's quite well known in L.A.; he's become a rather famous celebrity-event organizer. He had a brief career as an actor as well. If you ever see the movie "Earthquake," he was in that.

I don't like the film very much, and I don't think it represents my sensibility. It was valuable to get my first screen credit as a screenwriter, and I enjoyed working with the director very much, but basically I just came in at the end and did his revisions. I had no say on the subject matter or how it was treated. I just did what was necessary in order to get the film made.

And then there was "Impromptu" [an intellectual comedy with characterizations of Fridiric Chopin, Franz Liszt and George Sand], which is much more of what I understand as your style.

I think it's maybe the best thing that I will ever do. It was total pleasure, so much fun to write that I was very sorry when it was over. I just felt like I was at my peak. And it convinced me that I should take time off every now and then just to write something for myself. It was actually my proving ground before doing "The Hairy Bird" -- oh, I guess I should call it "All I Wanna Do." Because it was the first time that I just closed the door on the system and stopped taking studio jobs.

I saw a glossary of slang on the Web site for "All I Wanna Do." Did anyone actually say "bald cruller" [defined on the site as a hairless penis] in the film?

It was actually in use?

Sure. Some of it I made up for the movie, but that one was real.

OK, one last question. You've also said that it was important that the actors in "All I Wanna Do" genuinely like one another. How did you try to foster that?

Well, you can't, because frankly, at that age, young women can be very difficult in their relationships with each other, and I think that's covered in the movie as well. You make up and break up and make up, even with your closest friends. I know those things are there; I just didn't want them to be on the set. I wanted them all to be on the same side, pulling for each other. And I did achieve that -- they really were a team.

Pam Grossman is a poet and freelance writer who lives in New York.