An immigrant's brutal and disturbing memoir of abuse at the hands of fundamentalist parents and a sadistic husband. 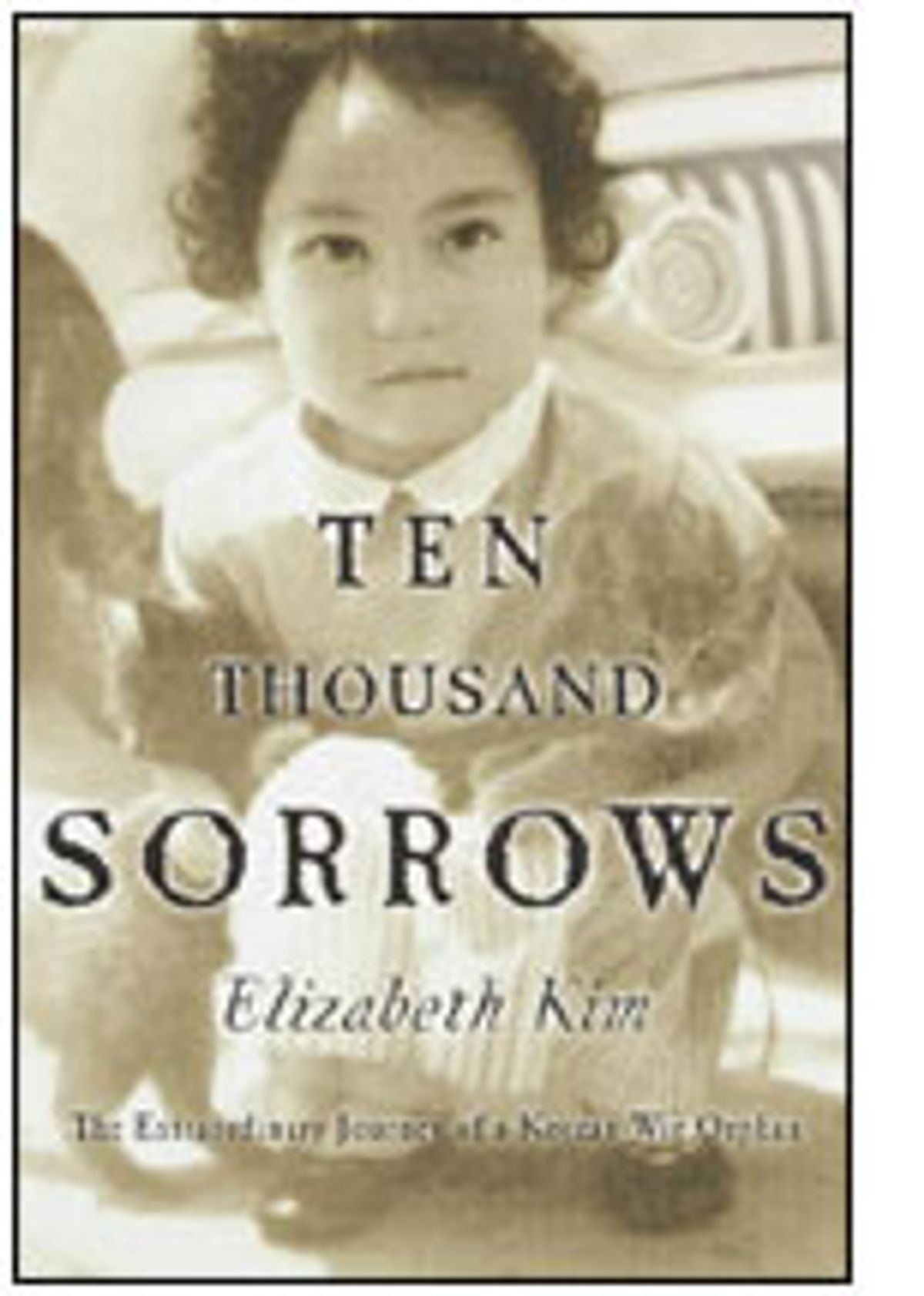 As a little girl walking with her mother, Elizabeth Kim hears herself called a "honhyol," "a despicable name that meant nonperson, mixed race, animal." Shortly after the end of the Korean War, the mother had returned from Seoul to her native village in shame, pregnant with a GI's child. Mother and daughter live as outcasts in a hut at the edge of town, and from the moment she can walk, the child works alongside her "Omma" in the rice fields.

When the girl is about 4 -- she will never know the exact year and day of her unrecorded birth -- her grandfather and her uncle demand she be sold as a servant. When her mother refuses, the men string the woman up in her own house. Kim, a witness to this "honor killing," still sees "those milk-white feet" twitch, as if in a dance, then grow still.

As a "honhyol, female, nameless, without a birth date," she is a fourfold embodiment of shame. Dumped at an orphanage run by Christian missionaries, she joins the other forgotten children, "the product of brief liaisons between soldiers on their way through and women on their way to hell." The kids are locked for hours at a time into cribs that look more like animal shelters. Occasionally, prospective parents peer into various cribs, looking for a cute specimen to adopt.

After hopeless months in her cage, Kim is finally adopted, sight unseen, by a missionary couple in central California. "Mom" and "Dad" are rigid fundamentalist Christians, and the girl they name Elizabeth begins a long sojourn in her own hell.

Although she learns English quickly and is bright and docile, a model child, she earns only scorn and an almost unbelievable cruelty. Treated more like a servant than like a daughter, she is punished for having nightmares, for being ill, for not smiling enough. The emotional abuse her parents devise -- all in the name of the Lord, of course -- is ingenious in its variety. They belittle her looks, insult her dead mother, make her sleep in a pitch-dark room to get over her claustrophobia. If she wakes screaming in terror, she is punished again for not trusting God's plan for her. When she gets attached to a toy or a pet, it is immediately taken away.

Elizabeth absorbs her lessons well. She comes to hate herself and to believe that she deserves only pain and suffering. At night, she claws at her body, drawing blood with sharp fingernails.

At 17 she is married off to a church deacon, and her life goes from bad to unbearable. Her husband is a sadistic bully who, besides regularly beating her, is only aroused by seeing her in pain. He also likes to have sex with other women in the back seat of their car while she's driving it. When she gets pregnant, he stomps on her belly.

He would probably have killed her sooner or later. But when he tortures and rapes her in their young daughter's bedroom, she finally gets sufficient hold of herself to run away, realizing that her child is now in danger as well.

Living in a shanty at the edge of town, making a meager living as a reporter for a local newspaper, Elizabeth in a sense recapitulates idealized memories of life with a beautiful, strong and loving mother. She tries to create for herself and her daughter Leigh a cocoon of security and love.

The two of them do seem to achieve a loving relationship and a stable household, though Leigh must have felt the weight of being her mother's only reason for living. (Leigh contributes some carefully worded paragraphs to her mother's memoir.) She had to cope with Elizabeth's increasingly dangerous sleepwalking, her claustrophobia, depressions and a recurrent longing for death that sharpened into a veritable lust for suicide.

This brutal memoir is haunting and disturbing, but for all the wrong reasons. I can understand that Kim had to write it, but it should never have been published. It is the account of a deeply damaged woman who has not been able to escape her traumatized childhood or to make any emotional sense of it. I was fascinated, appalled and finally ashamed, feeling more like a voyeur than like a reader.

Kim claims to have forgiven her parents, who in old age do seem to have mellowed. But her bitter account of them is a damning portrait of monsters; it is an act of revenge. In the sections about childhood and marriage, her writing has a matter-of-fact spareness that comes to feel more like numbness than unflinching honesty. The final chapter, in which she describes her continuing efforts to heal, through therapy and the practice of Buddhist meditation, is a stylistic mess. In a fervent childlike voice of belief, she trots out all the therapeutic clichis about "the healing process." She makes declarations of love to herself and considers the possibility "that things could be okay. I believed that healing was just around the corner; wholeness was just a breath away."

But she rambles, repeats herself and interrupts her ode to inner peace with painful memories that feel like flashbacks. Her psyche is still a battlefield where bombs fall and grenades go off. Her memoir is the work in progress of an unfinished woman. I have read it so that you won't have to.