With lives and money at stake in the Colombian drug war, one human rights lawyer takes a pragmatic approach to influencing U.S. aid. 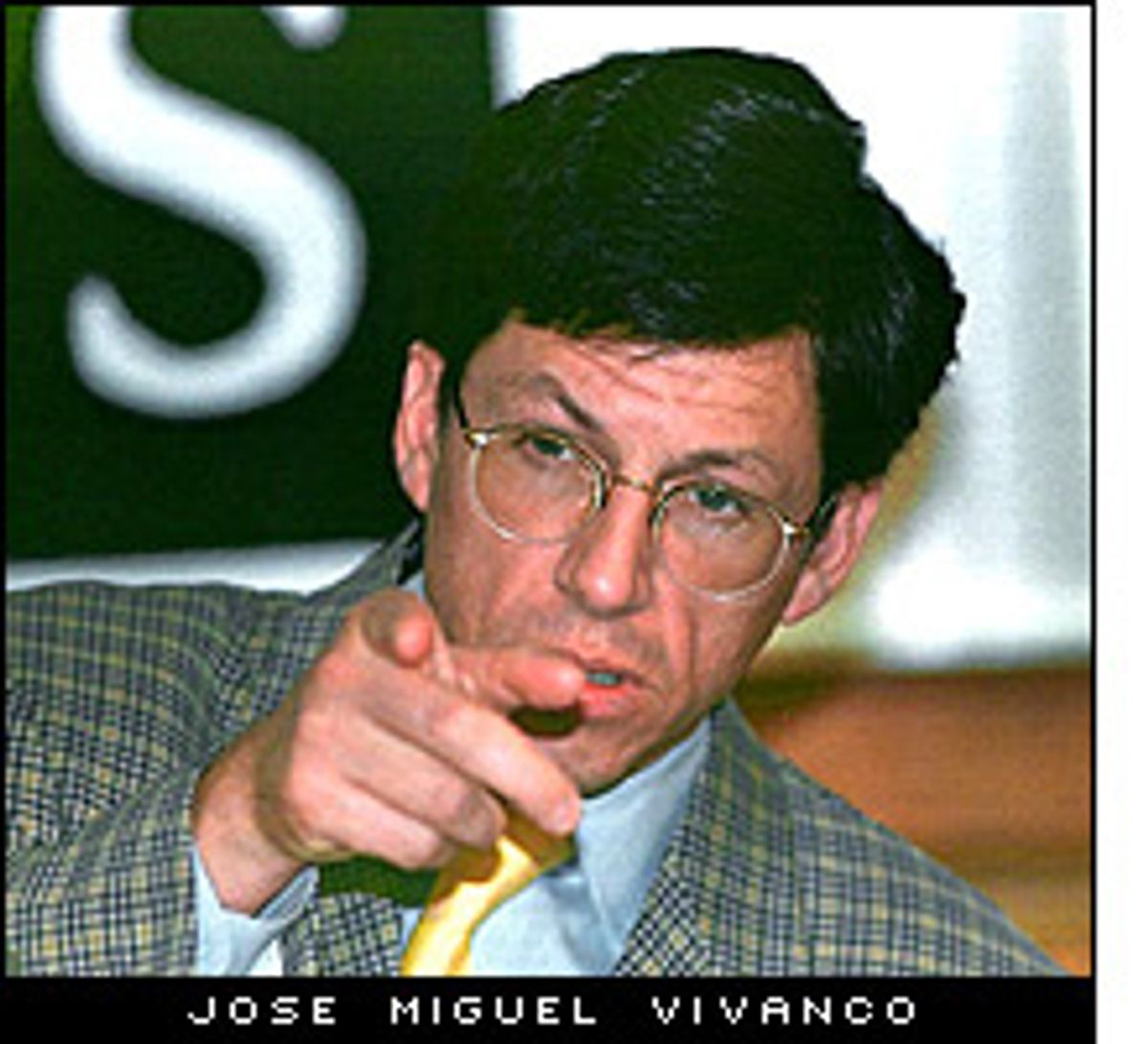 In war-ravaged Colombia, guns and money are often the only things that can make an impact. After 10 years of working in the field of human rights, Jose Miguel Vivanco knows this all too well.

Vivanco, head of Human Rights Watch Americas, prides himself on his pragmatic approach to human-rights advocacy in Colombia, where drug money is fueling civil conflict, and atrocities from both left-wing and right-wing terrorists are taking an incredible toll on civilians. Under Vivanco's leadership, the Latin American division of the group has played a pivotal role in influencing the U.S. congressional debate over a $1.7 billion military aid package to Colombia.

The aid package is intended to shore up the Colombian government's fight to dismantle drug trafficking networks by providing weapons and training to the army. Colombia is the leading supplier of cocaine to the U.S. and the second largest supplier of heroin.

Many human rights groups oppose the aid package because the war on drugs in Colombia is deeply embedded in a civil strife that involves left-wing guerrillas and right-wing paramilitaries. Because the Colombian armed forces have links to the paramilitary gangs which have carried out massive human rights atrocities, the groups argue that arming and training the army effectively strengthens the paramilitaries as well.

But early in the debate Vivanco realized that many influential members of Congress and the Clinton administration were determined to get the bill through Congress. Rather than debating the rights or wrongs of sending military aid, the Chilean-born, Harvard-educated lawyer became determined to influence the bill as best he could.

Taking no position on the aid itself, Human Rights Watch worked with both Republicans and Democrats in the House and Senate. They helped draft language to the bill that makes the Colombian military accountable for any human rights abuses or for collaboration with right-wing militias. The aid package is expected to be approved by Congress in the next few weeks.

By helping to draft the bill, Vivanco broke rank with other human rights groups that oppose the aid. "We were out there alone," Vivanco recalls. Human Rights Watch faced criticism from peer organizations, but Vivanco insists that without U.S. involvement in Colombia, the atrocities could continue with zero accountability because all warring sides have independent funding sources. "The irony of the debate is," he says, "that perhaps with the aid package the human rights community will have more influence on accountability than without it."

Threats against Vivanco from those involved in the Colombian conflict show that his group's efforts have had an impact. The Colombian armed forces have questioned Vivanco's personal involvement in the human rights debate, and on their official Web site they recently included a column by a right-wing journalist who accused Human Rights Watch of close collaboration with drug traffickers.

Last month, in a rare television interview where he showed his face in public for the first time, the legendary paramilitary leader Carlos Castaqo blasted human rights groups for vilifying the Colombian armed forces -- and used Vivanco as an example of such misdeeds.

"The paramilitaries' worst fear right now," Vivanco says, "is that we will convince Washington to force the Colombian army to dismantle them and end the close cooperation with paramilitary groups."

The situation in Colombia is complicated and often misunderstood by other nations. After three decades of civil war, the government is in the middle of a peace process to reconcile two Marxist guerrilla groups, which gain much of their income from the drug trade, and 20,000 right-wing paramilitary troops, who have organized in areas where the guerrillas are strong. The paramilitary groups also receive up to 70 percent of their income from the drug trade.

Conservative sectors in Colombia have argued that the paramilitary exists because of abuses by the guerrillas, which have engaged in massive kidnappings, extortion and attacks against the economic infrastructure.

Both the guerrillas and the paramilitaries have targeted the civilian population, burning down villages and killing peasants whom they accuse of collaborating with their enemies. The attacks have provoked the internal displacement of up to 1.5 million people.

Vivanco and top researcher Robin Kirk work closely with the Colombian prosecutor's office and the attorney general's office in charge of human rights. Many of their reports are based on fresh information provided by the Colombians, who believe that a report released in Washington has more impact than one released at home.

Human Rights Watch released an explosive report in February, The Ties That Bind: Colombia and Military-Paramilitary Links, which revealed that half of the 18 Colombian army brigades had ties to paramilitary groups. The report described how one army unit organized its own paramilitary group, enlisting active and retired officers. Some army field officers sometimes ignored calls for help from villages that were later attacked by paramilitary groups.

Given such a bad record, many in the human rights community see no hope for the Colombian military to clean up its act. But Vivanco believes pressure from Washington could help the army become more professional. The Colombian armed forces have cleaned up their act in recent years, he says, and are responsible for only 2 percent of all human rights violations.

The lion's share of the offenses have been carried out by the paramilitary gangs, which killed nearly 1,000 people in 125 massacres in 1999 alone, according to the Colombian prosecutor's office. "Some army officers have relied more and more on paramilitary gangs to carry out the abuses, and we would like the aid package to address that change," explains Vivanco. "Unless the U.S. forces an end to that relationship, they will continue it," he points out.

"Given our group's resources I thought we should jump into the area where we could get more for our efforts -- and that was in conditioning the human rights language in the package," Vivanco says.

If Human Rights Watch has its way, the new bill will clearly call for an end to all connections between paramilitary groups and some sectors of the Colombian armed forces. It would require the U.S. Embassy in Bogota to report to Congress monthly on the Colombian government's efforts to disband paramilitary groups, and on investigations and prosecution of attacks against human rights defenders. It would also introduce the use of civilian courts to try all military officers accused of human rights violations.

The Colombian army has said it will abide by human rights conditions attached to any aid package. But Vivanco says the army's narrow reading of the Leahy Amendment would result in nothing more than removing some bad apples from any unit. "They are not even thinking of prosecuting them," he says, "because their job is to make the most narrow interpretation."

Indeed, the army denies that the collaboration is widespread. In a recent interview with Colombian journalists, the head of the Colombian armed forces, Fernando Tapias, said the paramilitary problem is not an institutional problem, just a problem involving a few individuals.

With the right kind of influence from Washington, Human Rights Watch believes, the Colombian armed forces could clean itself up -- just as the Colombian police did. In the late 1980s, the police force was plagued with corruption, drug trafficking and human rights violations. When the U.S. began providing counternarcotics aid to the police in the early '90s, it attached conditions that the institution clean up its force. As a result, in the last five years, 11,000 policemen have been fired because of corruption, drug trafficking and human rights violations. The cleansing and U.S. training has turned the Colombian police into one of the best crime fighting groups in the hemisphere.

Human Rights Watch has taken a difficult middle course on this issue, balancing politics in Washington with the realities of the Colombian conflict.

Michael Shifter at Inter American Dialogue, a Washington policy group, said he was "heartened" with the position Human Rights Watch took on the aid. "It was a risk, but they created a space for themselves in the debate" said Shifter, whose group forms part of an independent task force set up to influence U.S. policy in Colombia.

"Their decision to take a different approach to human rights work showed an understanding that we should not be willing to just stand around and see the war continuing as it is. The bad guys, the paramilitaries and the guerrillas, have enough money to wage a dirty war even if the United States doesn't get involved."

"What does an advocacy group do when a no-aid position has zero chance of passage?" asks Cynthia Arnson, assistant director of the Latin American Program at the Woodrow Wilson International Center for Scholars in Washington, who faced that conundrum in the 1980s with the Nicaraguan Contra aid package. "Human Rights Watch would not have had the profound impact it is having on the debate if they had taken a no-aid position," she says.

Vivanco also sees a parallel between this bill and U.S. policy toward the Nicaraguan Contras, and more recently toward Kosovo. He says the package's language must be precise in order to prevent U.S. involvement in Colombia from turning into a human rights fiasco.

"We all know human rights protection is important in Colombia but we need to make sure [the Colombian Army, the U.S. Congress and the human rights community] are speaking the same language," he says. "The Colombian situation could always get out of hand, but at least you have a chance if you include all the necessary restraints."