The Erin Brockovich of the bonobo

Sex sells, says Dr. Susan Block, so why not use it to save an endangered species? 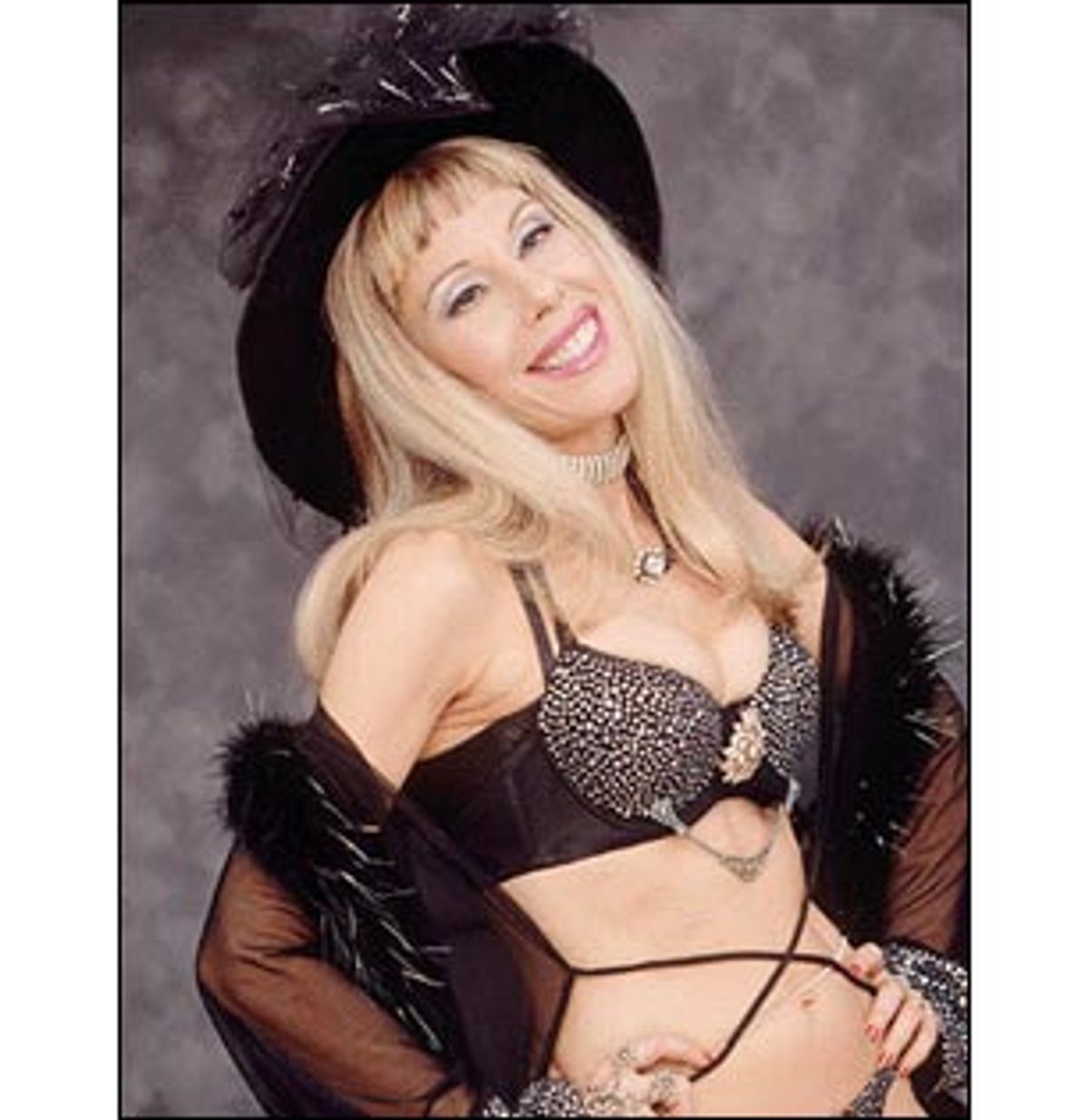 Dr. Susan Block calls herself the "Erin
Brockovich of the bonobo." Yet she's not
crusading against a power company
poisoning ground water, she's fighting
for a sexual revolution, and she's
drafted one of Homo sapiens' closest
relatives to help her in battle.

Block's TV constituency has been
described by Detour magazine critic Dale
Brasel as an "ever-growing cult
following ... Unlike Dr. Ruth," writes
Brasel, "you can actually believe she's
had and is still having sex. Good sex."

Block says this is largely because she's
a passionate subscriber to what she
terms the "bonobo way." Like the
chimpanzee, the bonobo, which look a lot
like the chimp, share 98.5 percent of
their DNA with humans, making them
roughly as close to us as a fox is to a
dog. These apes, also known as pygmy
chimpanzees, appear to function under an
egalitarian matriarchy in which the
highest-ranking males tend to be the
sons of respected females.

In fact, it's been observed that when
female bonobo share a meal, lovingly
feeding each other bits of sugar cane or
banana, they calmly ignore the charging
displays of males anxious for a bite.
Instead, when the ladies have had their
fill, they generously leave a portion
for the hungry, humbled male who waits
until they leave to claim his share.

The female bonobo's self-possession is
believed to come from a strong sense of
sisterhood, reinforced daily through
sexual petting and grooming rituals.

Still, should food sharing or virtually
any conflict arise, the bonobo know how
to avoid violence and apply a little
sexual healing to alleviate a tense
situation. Indeed, some observers have
witnessed the apes alleviating their
libidos in some form of hetero, homo or
self-sexual activity as frequently as
every 90 minutes. (Granted, their average
copulation lasts 13 seconds.)

As Block says, "They know how to give a
blow job for a banana or communicate
'Don't be nervous, honey; come sit on my
face.'"

Frans De Waal, a primatologist at the
Yerkes Primate Research Center in
Atlanta, has noted the profound
implications of the bonobo upon
evolutionary theory. "The art of sexual
reconciliation may have reached its
evolutionary peak in the bonobo," he
writes. He has predicted "after 20 more
years of research the bonobo is going to
change the whole picture of human
evolution."

As early as 1954 primatologists at
European zoos observed that the bonobo
mated like people, that is, face to
face. Yet, since the late 1970s, the
patriarchal chimpanzee with its penchant
for warfare and power politics, has
served as the chosen evolutionary model
for human behavior. It took until the
1970s,
for the first
researchers, a team from Japan, to
venture into the bonobo's sole
habitat: the Salonga National Park in
the dense equatorial Congo River
basin of Africa, a region ranked fourth
in the world for plant and animal
diversity.

Today, some researchers claim that had
primatologists studied bonobos earlier,
models of human development may have
challenged assumptions about the
supremacy of violence-prone males.

Block says she was elated to discover
her "French-kissing cousins" because
they authenticated the paradigm of her
life's work: a concept she calls
"ethical hedonism."

"Ethical hedonism supports the
egalitarian pursuit of pleasure and the
repression of violence," she explains.

Block sees other parallels between Homo
sapiens and our hairier counterparts.
She assures me that "penis-fencing," a
phenomenon De Waal observed among
captive males he found hanging face to
face from a branch twiddling their
diddlies together, is "the macho man's
best kept secret fantasy." She also
observes the female bonobos' tight-knit
cohesion among her own human girlfriends
who host swinger parties.

Block isn't blind to her shameless
anthropomorphism. But, she argues, "a
little anthropomorphism never hurt
Flipper." She says sex will offend as
much as it will titillate and no matter
how unscientific her perspective is on
the bonobo, it's impossible to overlook
their overt sex appeal.

"And guess what," she quips. "Sex sells.
Why not tap into my shows' audience to
help save the bonobo?"

In response to her critics from
academia, Block admits she's an inspired
businesswoman who is looking to them for
leadership. She claims her
Dr. Block Bonobo Foundation
serves to help protect the bonobo
through educating her audience and
encouraging donations to the Bushmeat
Project, the Bonobo Conservation
Initiative and the Bonobo Protection
Fund.

Sally Coxe, who researched the bonobo
for seven years after leaving National
Geographic, created the nonprofit
initiative to help promote information
sharing and collaboration among
international teams of scientists and
conservationists. Coxe could care less
about Block's occupation and plans to
involve her in an upcoming Peace Concert
Benefit.

Tony Rose, director of the
Biosynergy Institute and its Bushmeat
Project, which aims to stop the
increased trade of ape meat; Richard
Wrangham, author of "Demonic Males: Apes
and the Origins of Human Violence;" and
Hope Walker, director of the Primate
Conservation and Welfare Society, have
also shown enthusiastic support for
Block's efforts.

And de Waals, who concedes his book has
appeal to special populations, largely
gay and feminist, who could be targeted
for fundraising, still says he fails to
see why someone who has never been "in
the field" would be interested in saving
the bonobo.

Rose does. He's written extensively on
how conservation can become a "global
social movement based on a deepening
discovery of primate kinship." He writes
that scientific epiphanies rarely move
laypeople, but "biophilia," the belief
that humans, urbanites in particular,
are endowed with an innate fascination
and need to relate to other living
things, can. He cites the case of an
Internet chat with Koko the gorilla that
ranked the fifth largest in
online history.

Claire Richardson, president of the
Diane Fossey Foundation, seconds Rose's
contention that anthropomorphism goes
along with the human condition. "You
have to bridge the relevance gap. When
you talk about biodiversity the eyes of
the general public tend to glaze over.
So what we have to do with a charismatic
species like the great apes is use them
as a flagship species. What we know is
that it's about habitat, not individual
species. So if you educate the public
about our close kinship to the bonobos
and get the message out that if these
protected places disappear, so do the
species, maybe people will be more
motivated to act."

However Gaye Reinartz, coordinator of
the Bonobo Species Survival Plan for the
Zoological Society of Milwaukee, who has
just returned from the Congo where she
met with government officials about
reaffirming their conservation
commitments, gets a little fed up with
talk about "biophilia" and habitat.

"I don't sit around pondering my
interconnectedness," she says, "Let's
not put this in the abstract. Hell, the
Grand Canyon isn't habitat, it's the
grand old USA!" She recognizes, however,
that public pressure is needed to induce
U.S. foreign policy leaders to take a
more active role in bringing peace and
preservation to the Congo.

"Our government has certainly proved it
can hold a carrot and a stick," Reinartz
insists. "And believe me, the Congo
makes Kosovo look like Disneyland. At
some point it will become a security
risk."

The Milwaukee Zoological Society has
implemented a survival plan that focuses
on the training of native Congolese to
carry through their own conservation
efforts. "This isn't about white guys
counting monkeys," Reinartz says,
arguing against Western imposed
solutions, like telling hungry, war-torn
Congolese not to eat bushmeat without
offering up an alternative source of
protein.

Reinartz is also quick to note that in a
region where vibrators have less appeal
than a bowl of rice, the selling point
among Congolese will not be the bonobo's
sex appeal. Yet she feels Block's
efforts are fairly benign and could even
be helpful. "But if she's serious about
saving the bonobo, she can get me a
plane ticket back to Africa, which runs
around $4,000. I don't care if the money
is dripping in blood. At this point I'm
close to selling my soul."

The cranky desperation shared by
Reinartz and others in her field is
understandable. While Block and the
bonobos' sex life continue to provide
saucy headlines, the apes' survival is
extremely tenuous.

As Block points out, swingers are
primarily a middle-class phenomenon,
thriving in times of plenty. And some
researchers attribute the bonobo's
peaceful matriarchy to the Congo's ample
food supply. How will a species'
behavior change in a climate of war,
hunger and desperation?

Reinartz is clear that we have much more
to learn about the bonobo than their
sexual habits. More pressing at the
moment is finding out whether
sustainable populations even exist in
the Salonga.

Fieldwork has been stalled since war
broke out on the eastern side of the
park in August 1998. Deforestation, the
natural barriers of the Congo, poaching
and over 30 years of dictatorship,
unrest and colonial exploitation have
deprived the bonobo of their habitat. As
few as 5,000 may exist in the wild and
only 125 exist in captivity. It's
estimated that 300 to 400 are needed in
order to sustain genetic diversity.

And Reinartz brought back more bad news
from her recent trip to Kinshasa:
evidence of thousands of baby orphans
taken on as "pets" by rebel soldiers.
"That means the parents were killed and
most likely the babies will be sold for
meat," she says.

She tries to focus on the positives:
There's a great ape bill pending in
Congress that would make funds
available, the United Nations recently
declared the Salonga a World Heritage
Preservation Site and African
policymakers are recognizing the
benefits of ecotourism.

"We're just trying to stay alive and
wait out the war," she sighs. "We're
still committed to working with whatever
government exists and just hope we're
not too late."

Meanwhile Block continues to aspire
toward the bonobo model. "I'm an
imperfectionist, not a utopian. But I do
think violence spawns from frustration,
loneliness, bigotry and ignorance and if
we can mobilize an effort to save the
bonobo it will go a long way towards
saving ourselves."

Let's hope so. Extinction is definitely
not sexy, and losing the bonobo would be
a bitter pill indeed.